When it was announced that ESL One Cologne — one of the biggest esports tournaments of the year — would be played online due to the pandemic, the ESL broadcast team were faced with an unenviable task: how to maintain the status and energy of the world’s most prestigious Counter-Strike: Global Offensive tournament when players and fans can’t be onsite. 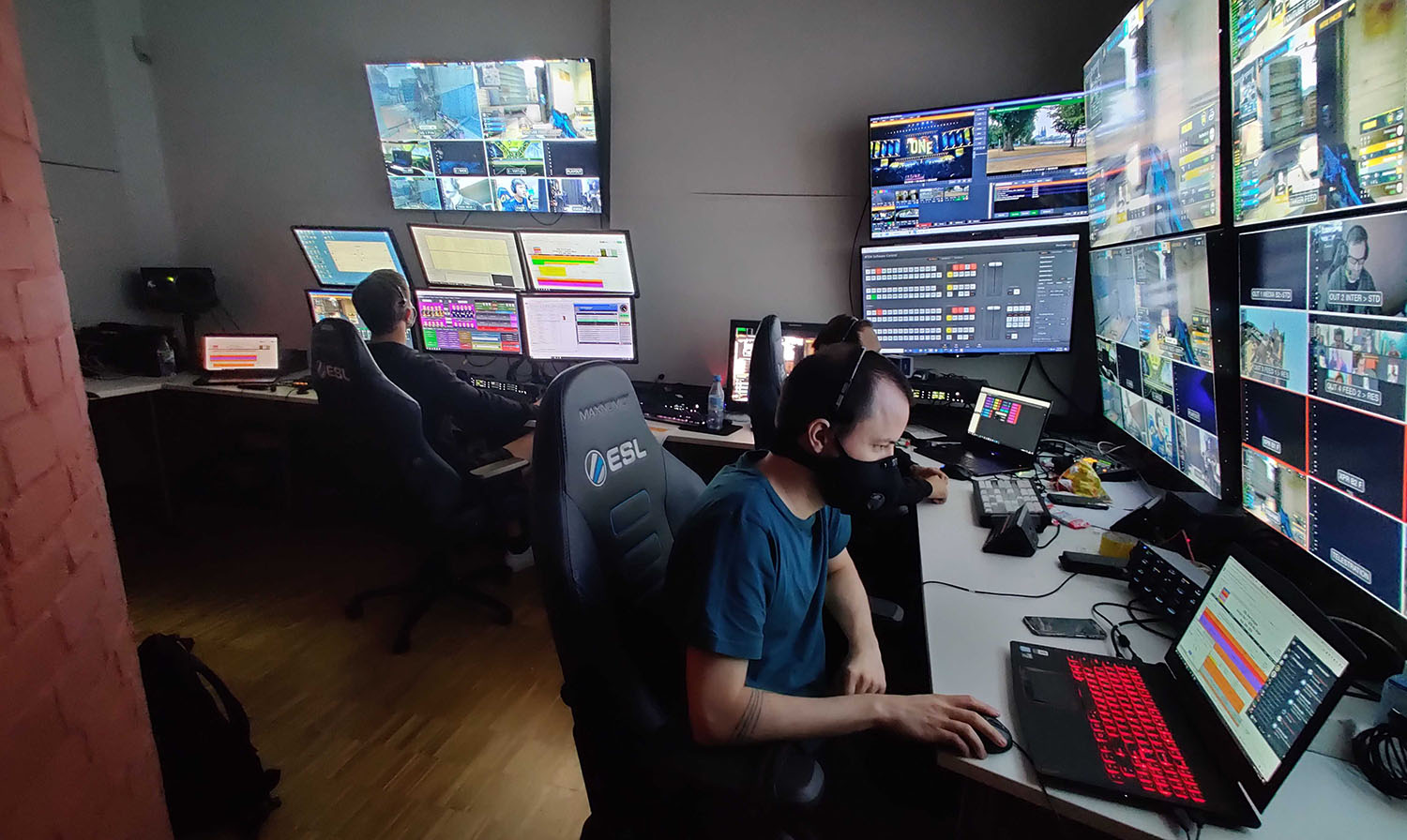 Despite the daunting challenge, ESL has leveraged a decentralized production model and Unreal Engine-powered virtual studio to re-create the raucous energy found each year inside Cologne’s Lanxess Arena (“the Cathedral of Counter-Strike”) remotely.

“One of the biggest factors playing into the excitement of live events such as ESL One Cologne is how [they] bring people together,” says Vlad Petrescu, head of broadcast innovation, ESL Gaming. “At an event, you get to see your favorite players up close and share in the excitement of the big stage with other fans around you. What we’re trying to do here is bring a little of that into the broadcast.”

ESL opted for a decentralized production model with nearly half of the 36-person crew (30 production and six talent) located all over the planet. ESL’s in-game production has six operators: a main observer, a secondary, an in-game director, replay operator, emotions replay operator, and technical director. On top of this, ESL has automated observers programmed to provide more angles on certain plays within the game. However, only the main observer and the technical director are onsite at the central control room in Cologne; the rest of the crew is spread throughout the globe: for example, the in-game director is in Australia, observers (in-game camera operators) are in the UK, and media server specialists are in Romania.

“Having so many remote operators also means we need to consider our bandwidth needs a lot more carefully,” says Petrescu. “Communications can be an issue, and making sure everybody is on the same page is a lot more problematic in a decentralized production. The amount of communication, split-second decisions, and the speed at which the in-game CS:GO production takes place makes remote operation a challenge, for sure, especially when we aim to improve on last year’s event, not go down in production value.”

It’s a drastically different workflow compared with the 2019 iteration of ESL One Cologne, which parked a mobile unit outside Lanxess, installed the full in-game production inside the venue and was up and running rather quickly. However, for 2020, ESL started coding software several months ago to better interact with the audience streaming at home, control multiple systems with a limited crew onsite, design a virtual studio, and more. 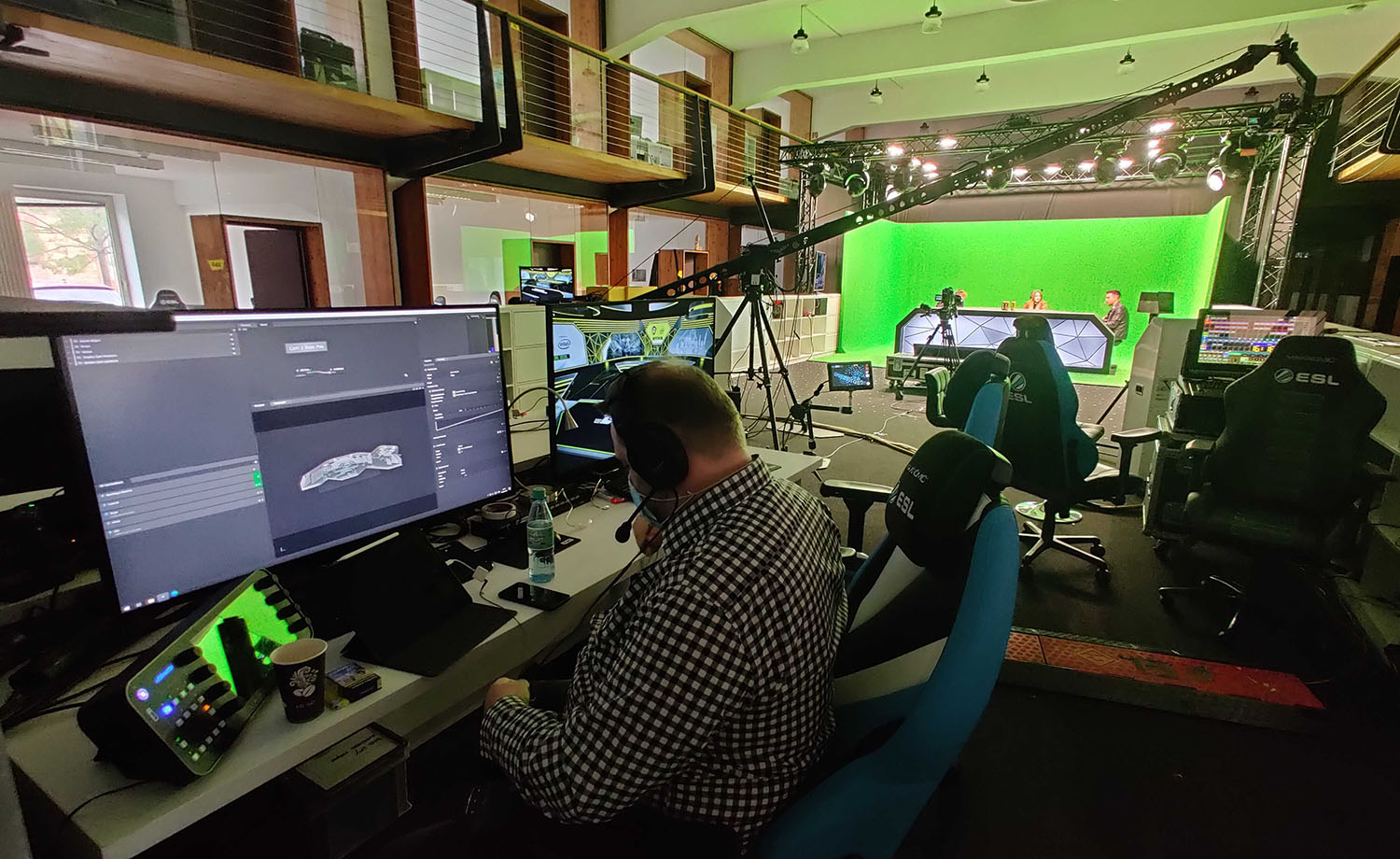 “It is definitely different than anything we’ve done before,” says Petrescu. “We have to rely a lot more on custom programming and interfacing different systems that were not really meant to be used in this way, which in turn means we need more system engineers to provide remote support. It’s just a completely new experience, but I personally found it very rewarding so far.”

ESL is using different methods for remote access depending on the needs. For example, observers are connected via ParsecGaming for low-latency/high-quality video feeds, and API developers use cloud solutions for monitoring and other functions. For communication, the team is using a mix of Riedel Communications intercom systems, Discord servers, and Google Hangouts.

Like many esports outfits operating during the pandemic, ESL is relying heavily on cloud- and software-based systems to produce the event. ESL One Cologne is leveraging several vMix streaming systems to bring in player camera feeds and fan cameras, AWS Cloud infrastructure for API data storing and processing, and a mix of Intinor encoders and cloud-based infrastructure for distribution.

“There are two lessons I will take with me for the next events,” says Petrescu. “First, things can be done remotely with similar results to a classical onsite production line. Second, never underestimate the amount of effort needed to accomplish tasks that were common before. Whoever says decentralized production is easy doesn’t have a high enough standard for it. To reach similar results to a classical production requires a lot of effort, different workflows, and the ability to think way outside the box — much further than most people are comfortable with.”

In Cologne: Limited Personnel Onsite But Plenty of Tech Firepower 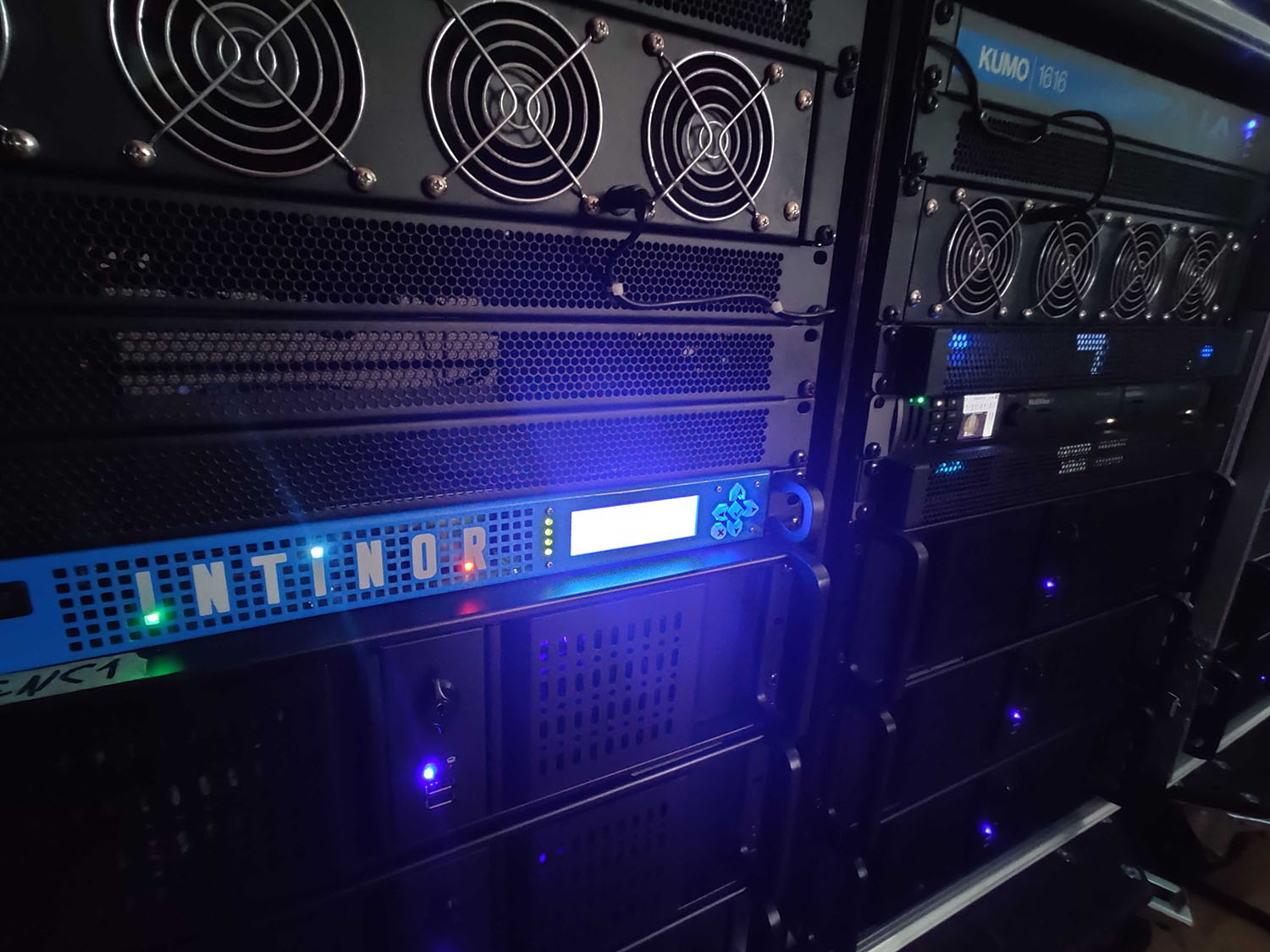 ESL’s production facility in Cologne underwent massive upgrades for this event, according to Petrescu.

The newest addition to ESL’s workflows is an Unreal Engine-powered virtual studio, provided in partnership with Bright Studios. In addition to using Unreal to render the virtual studio, ESL One Cologne is also using the high-powered–graphics system to augment the game world with AR-like elements within the broadcast.

At the central core, ESL is using an ATEM Constellation switcher and Allen & Heath DLIVE S5000 audio console (all digital audio signals are handled via a Dante network).

ESL has also beefed up its EVS replay infrastructure, adding sources to its existing EVS XT3 servers so any single moment from the game server can be processed and replayed from multiple angles and perspectives.

“The custom programming around this production is the other big challenge,” Petrescu notes. “We had to tie multiple systems together so that one position, like the technical director, controls way more than in a classical production line. He has control over routing, Unreal Engines, media servers that feed content to the virtual LED screens, real and virtual cameras, and much more. All this would be impossible without a lot of custom programming that works in the background to synchronize all this.”

Onsite production personnel has been kept to a bare minimum with only essential crew members onsite, and ESL has put a litany of safety protocols in place at its primary production facility. The office space in Cologne has been completely split in two, so that production crew and ESL office staff do not intermingle in any fashion. The talent and production crew are also isolated to avoid crossover. In addition, masks are required in all spaces, the only exception being when talent is on live.

“I have very high standards for me and my team,” says Petrescu. “I expect everyone to bring their A-game, and, while I do expect a lot from each of them, they still manage to surprise in the most positive way. Working with such a great group of people makes everything seem easier.” 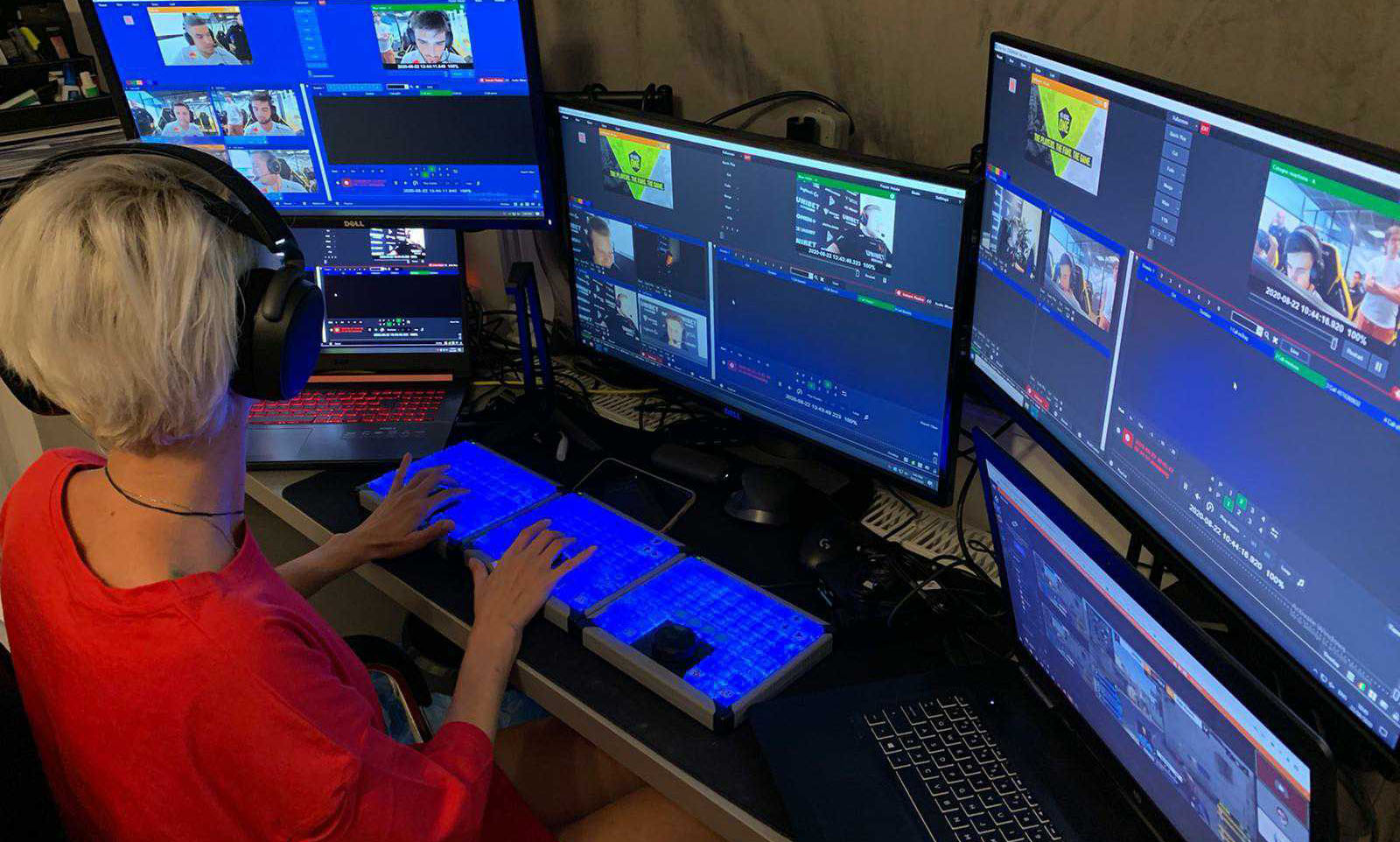 Instead of the traditional winner-takes-all format, this year’s tournament, which concludes its 12-day run on Sunday, has been divided into four regional divisions: Europe, North America, Asia, and Oceania.

“The changes in the tournament structure have a huge effect on the production side,” says Petrescu. “There is a chain effect that ties all this together. Tournament changes, the run-of-show changes, the technical requirements for the show changes, new software is needed, new capabilities, more flexibility, etc.”

Splitting the structure of ESL One Cologne from one global tournament into four regionals meant that the ESL production team had to rethink the narrative of the tournament. Rather than building toward a single dramatic conclusion with two teams battling it out in the Grand Final, Petrescu and company had to bring the same dramatic punch to four regional finals.

“Our hope is that, instead of having a really high peak, by upgrading most of our production elements, we will have a higher average viewership for the duration of the tournament,” he says. “There is only so much you can do to compensate for what an event like ESL One Cologne is when Lanxess Arena is sold out.”

Three Weeks to Game Time: A Fan-First Experience on a Short Timeline 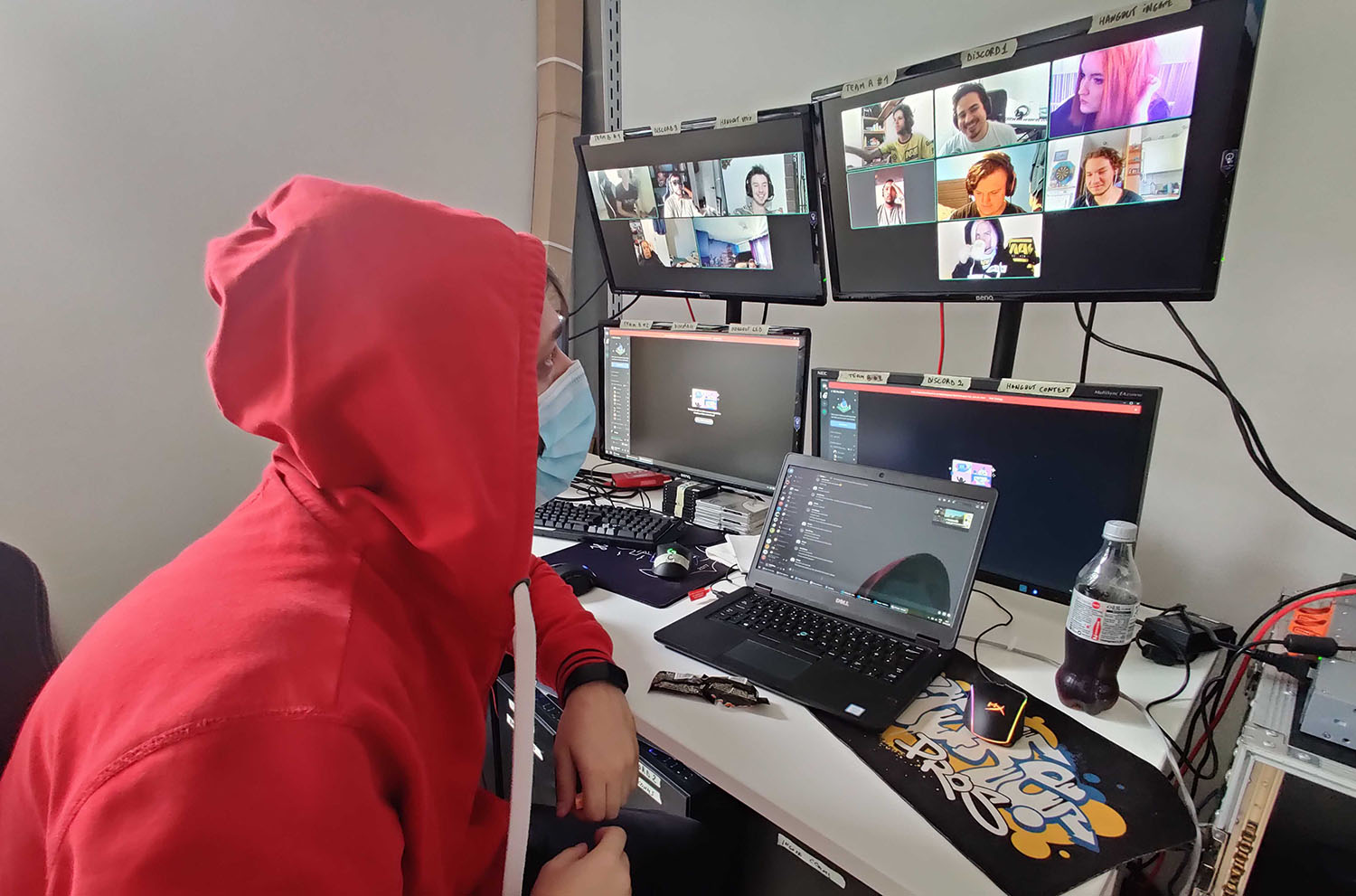 Once ESL announced the switch to online play for ESL One Cologne in mid July, the production team had just a matter of weeks to come up with a new workflow that would provide viewers with a high-quality experience despite the lack of an audience inside Lanxess Arena.

“Everything in esports is last-minute; that is just a fact of life. On one hand, this teaches us to be very flexible and adjust to an evolving situation much faster. On the other hand, when you get three weeks to design and implement a fully virtual studio and change the whole workflow, it’s just [another day].”

ESL had already begun developing a variety of concepts to more heavily engage the audience during the show, such as direct links to interact with casters/talent via Twitch Extensions. In addition, ESL flew production teams out to the players to create content with them in their homes, as well as provide webcam interviews into the studio. ESL is also bringing fans into the action via fan chatrooms integrated into the production so they can watch the games with one another.

“We want fans in chat to see others supporting the teams they enjoy watching and feel like they are a part of this community that spans the globe,” says Petrescu.

In addition to player-focused feature segments, ESL is emphasizing the significance of Cologne and what it means for CS through features that highlight historic plays and stories from past years.

Although the in-person experience of a live event is impossible to fully recapture, ESL is doing its best to bring it to the masses watching. For example, DHL Drops (prizes normally dropped off to audience members in the arena) are being shipped to viewers’ homes. And releasing the new CS:GO hub online alongside the event supplements their CS:GO experience while they are not watching matches. In addition, viewers are being incorporated into the broadcast by submitting their own creations, music, and voting on what will be included next.

“It’s all about establishing this high level of engagement and interactivity that is so common in the gaming community, esports, online, or on LAN. Hopefully, we’ve been able to accomplish this, even in part,” says Petrescu.

The ESL One Cologne Finals for the EU, NA, Asia, and Oceania Divisions take place this Sunday, Aug. 30 and can be live-streamed on ESL TV.

Race to the Finish: BBC Sport’s Lead Director for the London Marathon Matt Griffiths Talks Cameras, Bobbing Heads, and Capturing the MassesLondon Marathon 2022 Photo Gallery: Behind the Camera on the Host Broadcast Operation