As the NFL caps Week 10 tonight with an NFC North showdown between the Minnesota Vikings and the Chicago Bears (8:15 p.m. ET, ESPN), the crew at ESPN’s Monday Night Football continues to grow more comfortable with the unique staffing and workflows needed to bring an A+ production to a season beset by COVID-19 restrictions and protocols.

In a collaboration between ESPN’s Production, Production Operations, and Remote Operations teams, MNF is deploying what the broadcaster is calling a GREMI+ workflow to meet the needs of this unique NFL season. For the past few years, ESPN has worked with various flavors of GREMI workflow, which brings largely live graphics-related positions from the compound and into the broadcast center. GREMI+ for Monday Night Football further expands that concept. 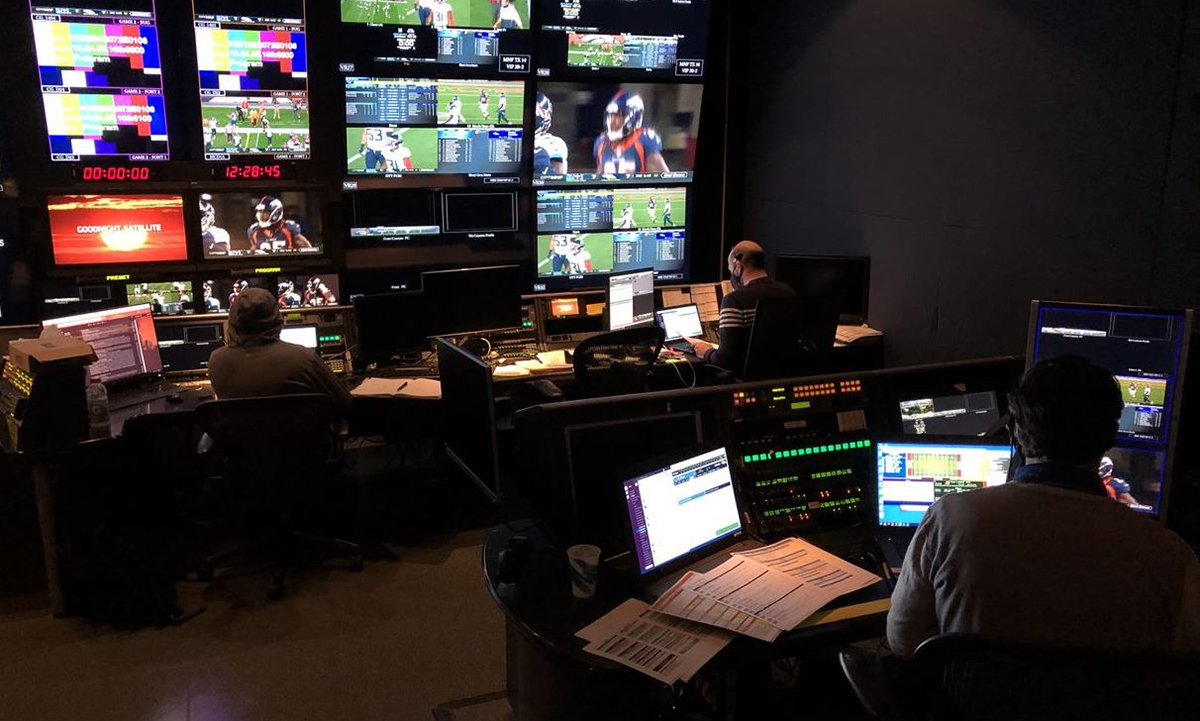 For this season of Monday Night Football, ESPN has deployed a GREMI+ workflow that moves graphics and replay positions from the compound to a new production-control room in Bristol.

With a production-control room in ESPN’s Bristol, CT, headquarters, certain positions on the crew are able to work offsite. Among the positions in this PCR each week are a primary Vizrt operator, a graphics producer, a researcher, a clock-and-score operator, the stats operator, and someone handling NextGen stats and clock-and-score support. According to an ESPN rep, modifications to monitoring and connectivity allow the reduced number of people in the space mandated by social distancing.

The EVS XT-VIA production server – in tandem with the new LSM-VIA replay and highlights system – plays a critical role in making this workflow possible, combating any latency issues that would prove detrimental to a replay operator’s job and establishing a cutting-edge solution for the monitoring of sources that live on the truck and are transmitted via IP encoders.

With VIA, ESPN can move to a client/server architecture, reducing the need for connectivity edge gear. Previously, using EVS’s LSM alone would have been challenging given the reliance on J2K baseband signals for the operator’s multiviewer. ESPN is using Kiloview encoders to create a Web RTC stream of the operator’s multiviewer that can be accessed on the client. With the clients run in dual-desktop mode, each operator has two screens: one for the EVS GUI, one for the multiviewer stream. This project also marks the first time, according to ESPN, that the EVS LSM-VIA systems have been used on-air.

As one might expect, this is all a significant transmission challenge — one that the Walt Disney Direct-to-Consumer & International (DTCI) group has risen to. The payload consists of 10 inbound paths at 1080p for game/studio and an additional eight services to meet the needs of GREMI+.

“This was an important year for broadcasting across the board – leveraging many innovations and workflows, thanks to many of our organization’s teams,” says Steve Simeonidis, manager, transmission operations, Walt Disney DTCI. “The GREMI model has expanded from two services over J2K in 2017 to the eight paths we currently deliver via IP transport.” 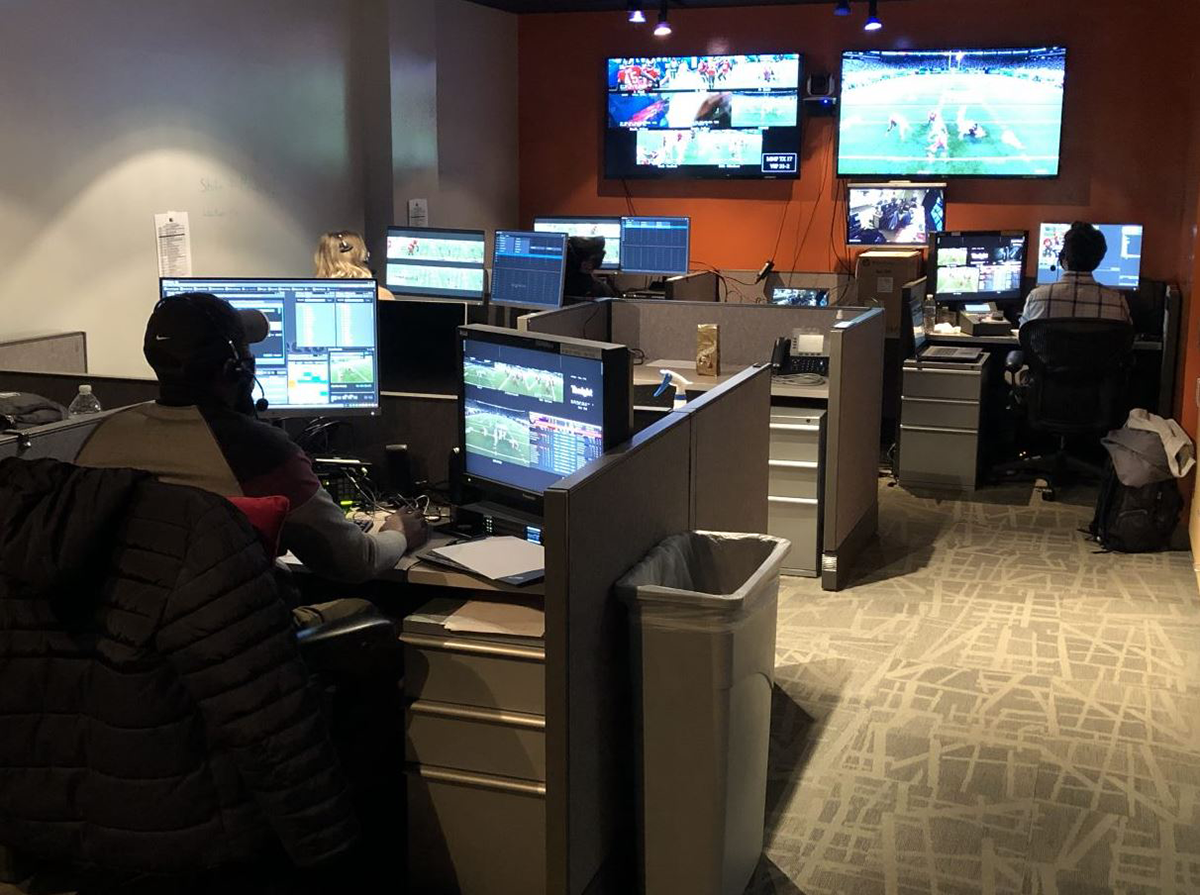 A robust transmission plan using IP has allowed workstations typically onsite in the production compound to seem right at home in ESPN’s broadcast center in Bristol.

According to ESPN Director, Production Operations, Joel Banks, although ESPN crews have deployed similar GREMI workflows on other properties, the Monday Night Football project is a notable step up.

On the graphics side, the crew is using IP and encoders for graphics operators’ multiviewers. Those are created in the truck and have all the elements the operator needs: such as font one, font two, their preview, and other sources they need to see to feel at home in the truck. That might also include camera feeds or replay sources to reference.

Where the J2K transmission paths really shine is for the EVS operators. That latency-free experience is critical to effectively running a replay device. ESPN worked closely with EVS technicians to fine-tune this element of the workflow.

“With Monday Night Football, there is a large amount of transmission paths and resources that we’ve got to contend with,” says Banks. “Our operators have been working GREMI for a while, and they know the iso. [Producer] Phil [Dean] and [director] Jimmy [Platt] have done GREMIs before, so there’s some comfort there, but, obviously, this is a new sport for them to GREMI.”

In addition to the standard scorebug and detailed graphics package featured on MNF broadcasts, the operations group is fine-tuning a workflow that allows high-end telestration tools as well to fit into this GREMI+ model. Monday Night Football transitioned to Vizrt Libero for in-game and pregame telestration support this year, and Remote Telestration Operator Lou Russo now operates in the Bristol replay room, connected to a Vizrt Libero on the truck through Blackbox KVMs. Russo also has an EVS LSM remote controller connected through a DIGI serial-to-IP convertor for parallel remote control. This custom graphics package was also deployed to support NFL studio shows to create a unified telestration look across all of ESPN’s NFL productions.

The synergy between the onsite truck and the Bristol PCR is further facilitated by the addition of an RTS RVON I/O in Bristol. According to an ESPN rep, this allows better technical support from the truck side and also saves significant Bristol resources to provide an optimal user experience. One of the content-associate positions normally on the truck was moved to Bristol and operates out of the replay room there. Using Blackbox KVMs, the content associate controls an EVS IPDirector on the truck to log the game and support package building.

ESPN acknowledges that there have been some growing pains, which is understandable when deploying a new workflow this robust in the midst of a season whose schedule remained uncertain just prior to the start of the campaign in September. In addition, ESPN, as is tradition, opened with two broadcasts on the first Monday night.

“I’m excited about the updates that have been made,” says ESPN Associate Supervisor, Production Operations, Dan Lannon, “and I do think, long term, the product has a lot of benefits in terms of that straight IP connectivity. It is a little scary to the EVS operators that have been working for 20-some years on the same remote and same interface. But there are some added advantages to it, and the operators have picked it up pretty well and pretty quickly.”