UBEAT, the free esports and entertainment multiplatform of the MEDIAPRO Group, celebrated its second anniversary by surpassing the monthly maximums of both unique users and reproductions in November. In these two years, UBEAT has managed to become a benchmark thanks to its unique commitment to the distribution of esports content (video game competitions) and new entertainment formats for new audiences. 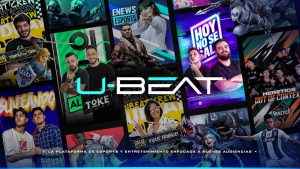 UBEAT was born in a two-tiered format at the end of 2018 promoted by the MEDIAPRO Group, one of the leaders of the European audiovisual sector. On the one hand, a 24/7 linear television channel available on the main operators in Spain and Latin America; and on the other, via an OTT (ubeat.tv and the applications for Android and iOS mobile phones) where more than 15 entertainment formats are available aimed at new audiences and more than 4,000 hours of original and exclusive digital content.

Since its launch, the platform’s audience has continued growing month-on-month. The commitment to its own productions combined with the best esports content have led UBEAT to celebrate its second anniversary with its best numbers to date. In fact, November was the best month for the platform since its creation, with 1.8 million reproductions of the different formats, which represents six times more (500% growth) than the figures for the same month of the previous year.

So far this year, UBEAT has accumulated more than 2 million unique users, and the monthly average of unique viewers (190,000) has grown 80% compared to the previous year. In fact, the arrival of the pandemic did not stop the channel’s activity -the productions were carried out remotely-, but rather opened it up to new audiences and accelerated the consumption: video consumption as well as the number of monthly users has multiplied by three since January.

The key to UBEAT’s growth is the offer of new formats, which has increased in recent months with new programs that are defining the channel’s own personality. In addition to Hoy No Se Sale, the talk show presented by Ibai Llanos and Bruno Por Feliu (now airing its fourth season), productions such as Al Toke were added, where the football week is analyzed on the networks in a humorous way; or Buyeando, presented by content creators Xbuyer and MiniBuyer.

Another key highlight is the success of “UBEAT Crew”, where the most recognized content creators unleash their creativity; “Heretics Out of Context”, with exclusive videos starring the members of the renowned esports team Team Heretics; or the commitment to trends such as freestyle with the exclusive broadcast of the presentation of the latest Trueno album or “Invert is back”.

In addition, UBEAT continues to invest in Latin America, with its own signal from the television channel, the distribution of the best esports competitions in the region and localized programs. In this sense, it was remarkable that “Hoy No Se Sale MX” premiered in August, the TV program that localizes the Spanish format and that in this case is presented by the Mexican content creators RIX and Paco de Miguel. In 2020, 40% of UBEAT.tv’s consumption comes from Latin America.

“UBEAT has just turned two and it has done so with the best figures in its history,” highlights Marta Ruiz de Gauna, manager of UBEAT. “Every time we reach more audiences with our entertainment productions, and in 2021 we will continue to bet on producing original and specialized content, covering new and different territories to continue adding audiences.”