For 15 years, Fox Sports North has cemented “Hockey Day Minnesota” as a sports television tradition in the “State of Hockey.”

In years past, the event has taken high school and college hockey games and showcased them outdoors for a day-long celebration of the sport, all leading up to an evening tilt featuring the Twin Cities’ home NHL franchise, the Minnesota Wild. This year, with the in inability to host the event safely in the face of the COVID-19 pandemic, the Minneapolis-based regional sports network – which is now owned by Sinclair Broadcast Group – did not want to let the event go by unmarked. So, they set up shop at a local outdoor skating rink [the John Rose Oval, just north of Minneapolis-St. Paul in Roseville] with a remote studio show anchoring a day’s worth of classic games, interviews, and high-end features. 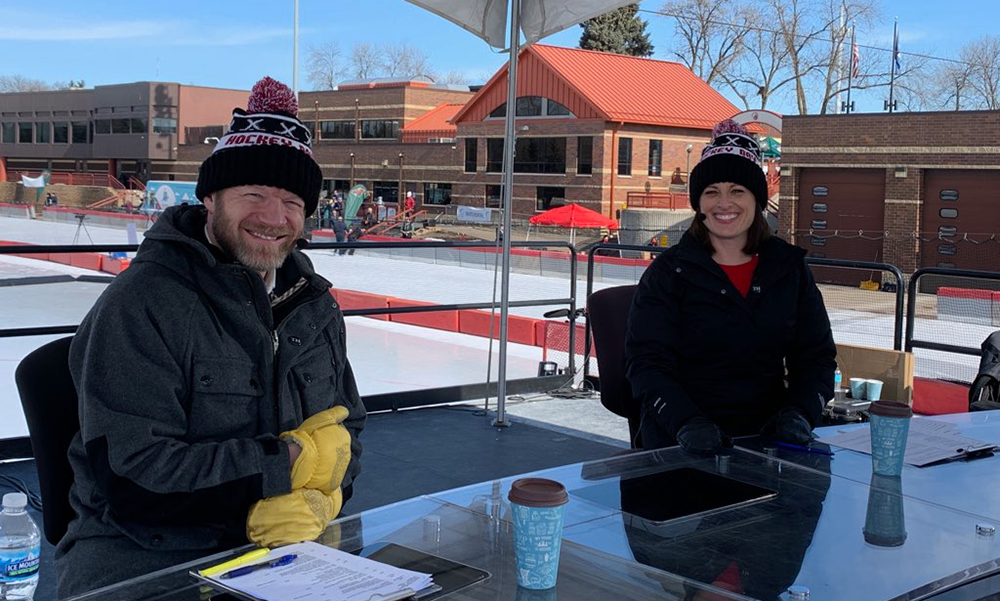 “We had to find a way to make this happen,” said Mike Dimond, SVP and GM, Fox Sports North. “We didn’t want to take a hiatus. It was a labor of love and was a work in progress throughout, but there was complete unity in wanting to make sure that we had a Hockey Day this year.”

According to Fox Sports North senior producer John Stroh, the storytelling challenge for the crew was making the event feel special despite the lack of live games. The network aired classic games, even bringing back former players – many of which are now parents and coaches themselves – in Zoom interviews. The show also brought in local hockey personalities to the live set for interviews tying the event to the present day. Minnesota Wild player Matt Dumba actually hosted a camp at the set that was showcased at the top of the show. Fittingly enough, he scored the game-winning goal for the Wild later that night with just .3 seconds remaining in regulation.

As for the logistics, a talented team headed up by Fox Sports North director, operations Bob Rohde made easy work of the event. He noted this show was naturally much simpler operational to execute versus the massive rink and live game set up that the RSN will bring to a host city each year. However, it certainly wasn’t without its logistical challenges: most of them COVID-safety related.

The show was handled out of a mobile facility built by Rush Media that worked perfectly for both the size of the show and safety reasons. The truck features six customizable workspaces that are separated by hard walls. It offered flexibility while making it easy to maintain social distancing for the crew in the truck.

Fourteen years of fun on ice!

The show featured standard hard/manned studio cameras, though a jib proved very valuable for scenics while also serving as the primary stage camera. In addition, there was a camera operator on skates with a MOVI grabbing some unique angles of kids playing on the ice behind the main set.

“We site surveyed and met with the people who run The Oval a couple of times,” says Rohde, who noted that the city of Roseville dedicated a 10gig network to assist the show. “Those people were great and this thing fell together pretty easily.

As in years past, Fox Sports North used an ARCTEK satellite unit to transmit from the venue and, since facility power was used to support the chillers that kept the outdoor rink’s ice frozen on an unseasonably warm day for the area, the show brought in its own Ziegler Power Systems generator (by CAT Entertainment Services) to power the television facilities. Zixi IP was deployed to connect the truck to the network’s Minneapolis offices, granting direct access to the edit suites located there.

The broadcast also paid tribute to Fox Sports North coordinating producer Trevor Fleck. It was announced over the summer that Fleck had been diagnosed with Stage IV colon cancer. He underwent surgery earlier this year and is currently battling through rounds of chemotherapy. Fleck has played a role in the production of each of the previous 14 editions of Hockey Day Minnesota and has worked at Fox Sports North for two decades.

.@HockeyDayMN has been such an incredible day over the years thanks to our good friend and @fsnorth coordinating producer, Trevor Fleck.

We want to send him and his family the best this #HDM2021 as he battles cancer. pic.twitter.com/5FXug4us3P

The 15th edition of Hockey Day Minnesota was originally scheduled to take place in Mankato back in January. Dimond said the network plans to pick up those plans and return to Mankato for the event’s full reincarnation in 2022.