From the Middle of Nowhere: How the Iditarod 24/7 Live Stream Is Produced Amid the Pandemic

On March 18, 2020, Alaska’s iconic Iditarod Trail Sled Dog Race was one of the last sports events to be completed before the sports world came to a halt due to the pandemic. One year later, the Iditarod is back, but with a very different trail map and a fan-less atmosphere. However, the challenges for the video-production team bringing the Iditarod to the masses — perilous weather, ultra-remote locations, and a lack of reliable connectivity — remain the same. 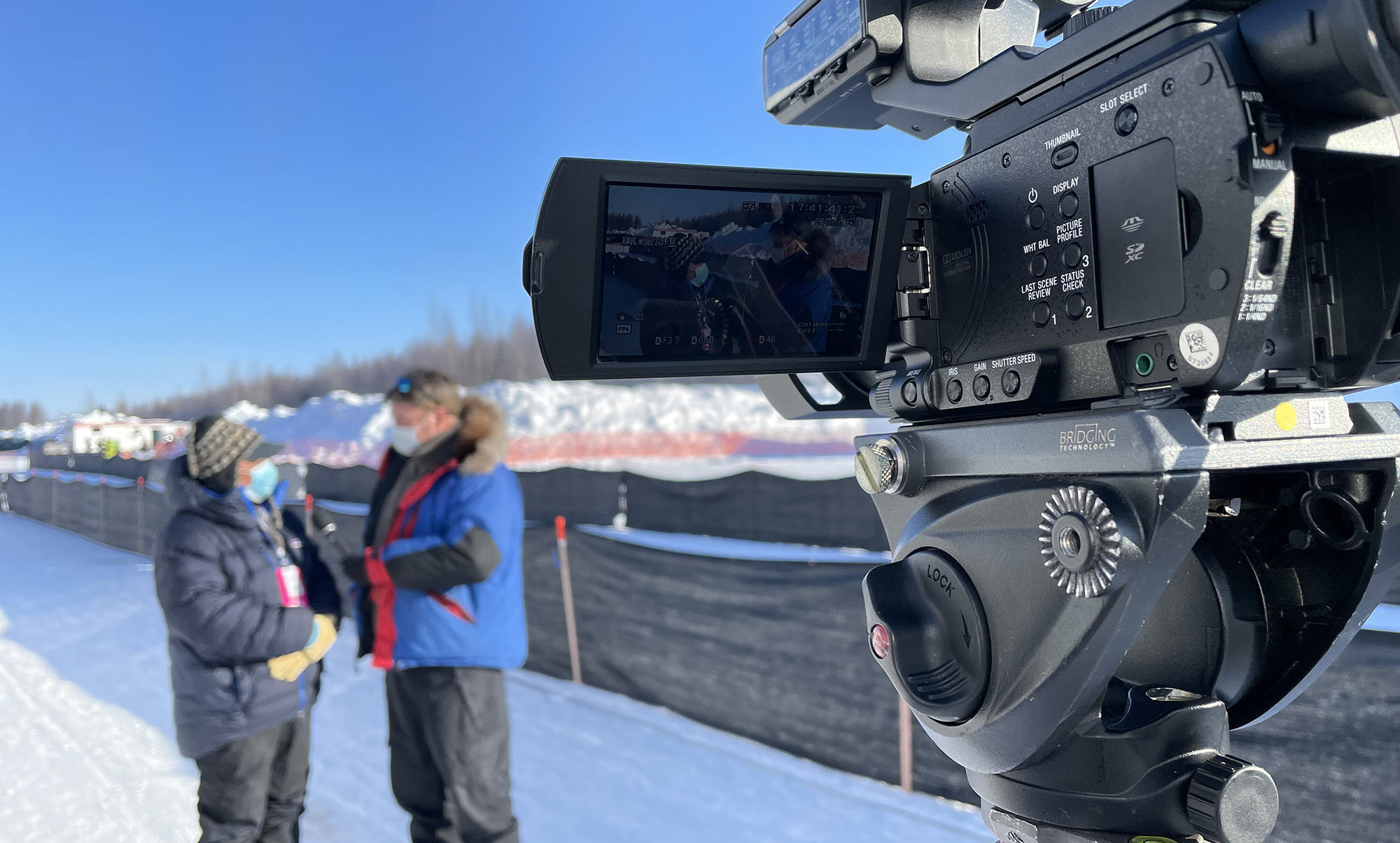 This year’s Iditarod race is unlike any before it, given the changes mandated by the pandemic.

“The fact that they are even able to hold the race this year is a miracle,” says OTEK TV owner Art Aldrich, who is in his 14th year overseeing the Iditarod video production. “And the fact that almost all of our crew has come back to do it is definitely a testament to the environment, the people, and the sense of teamwork that we have. Because of the COVID situation in Alaska, there aren’t many [outside visitors] and no other media, so we’re trying to do more coverage than ever to try to bring a larger audience in. We are the way for people to see the Iditarod, so this is an opportunity for us to showcase what we can do.”

Live 24/7 coverage of The Last Great Race on Earth, which kicked off on Sunday just outside Anchorage, can once again be streamed on Iditarod.com with an Iditarod Insider subscription, but viewers are seeing a much different event from the one in past years. 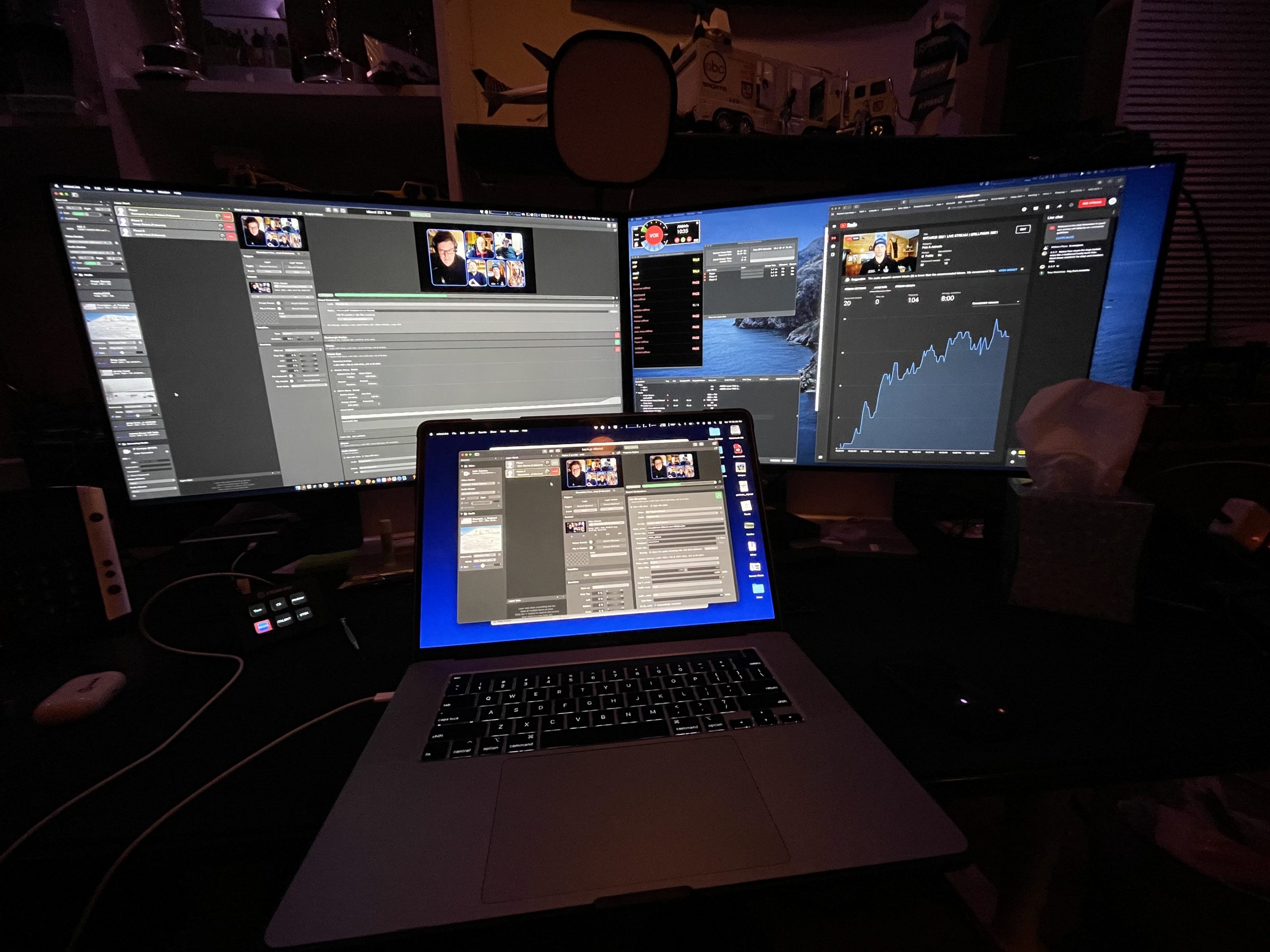 OTEK TV’s Art Aldrich is controlling the Iditarod video production from his control room at his home in New York.

Traditionally, the trail runs from Anchorage to Nome – roughly 1,000 miles – with mushers traversing a series of checkpoints. In an effort to protect the native villages, mushers this year make a loop from Anchorage to Iditarod (a ghost town at the traditional halfway point) and back. In addition, they are not allowed to enter any native villages along the way, all annual public events (including the Ceremonial Start and Finishers Banquet) have been canceled, and the usually raucous crowds at the start and finish lines have been told to stay home.

In addition, all production crew members traveling in from out of state were COVID-tested 14 days out, three days out upon landing in Anchorage, and again before the race began. In addition, all sets are limited to production crew, mingling with volunteers or mushers is prohibited, and social distancing and masks are required at all times.

“Both the Iditarod and our team are being very cautious, focused on safety, and avoiding taking risks wherever possible,” says Aldrich, who is producing the live stream remotely from his control room at home. “That said, the team that has volunteered to go up this year has been doing it for a lot of years and are excited to be back.”

Over the next two-plus weeks, three live-production teams (each comprising a camera operator and on-air talent/producer) are traveling via bush plane from checkpoint-to-checkpoint to cover the race. In addition, five ENG teams have been deployed to capture documentary footage and produce daily highlights.

Although the crew remains small, the production has come a long way since 2014, when the not-for-profit Iditarod Trail Committee (ITC) began expanding the live coverage beyond just the Ceremonial Start and the winner’s crossing the finish line. The production has gone from a few GoPro cameras streaming out of a makeshift control room to a full 24/7 operation that hits checkpoints throughout the trail. 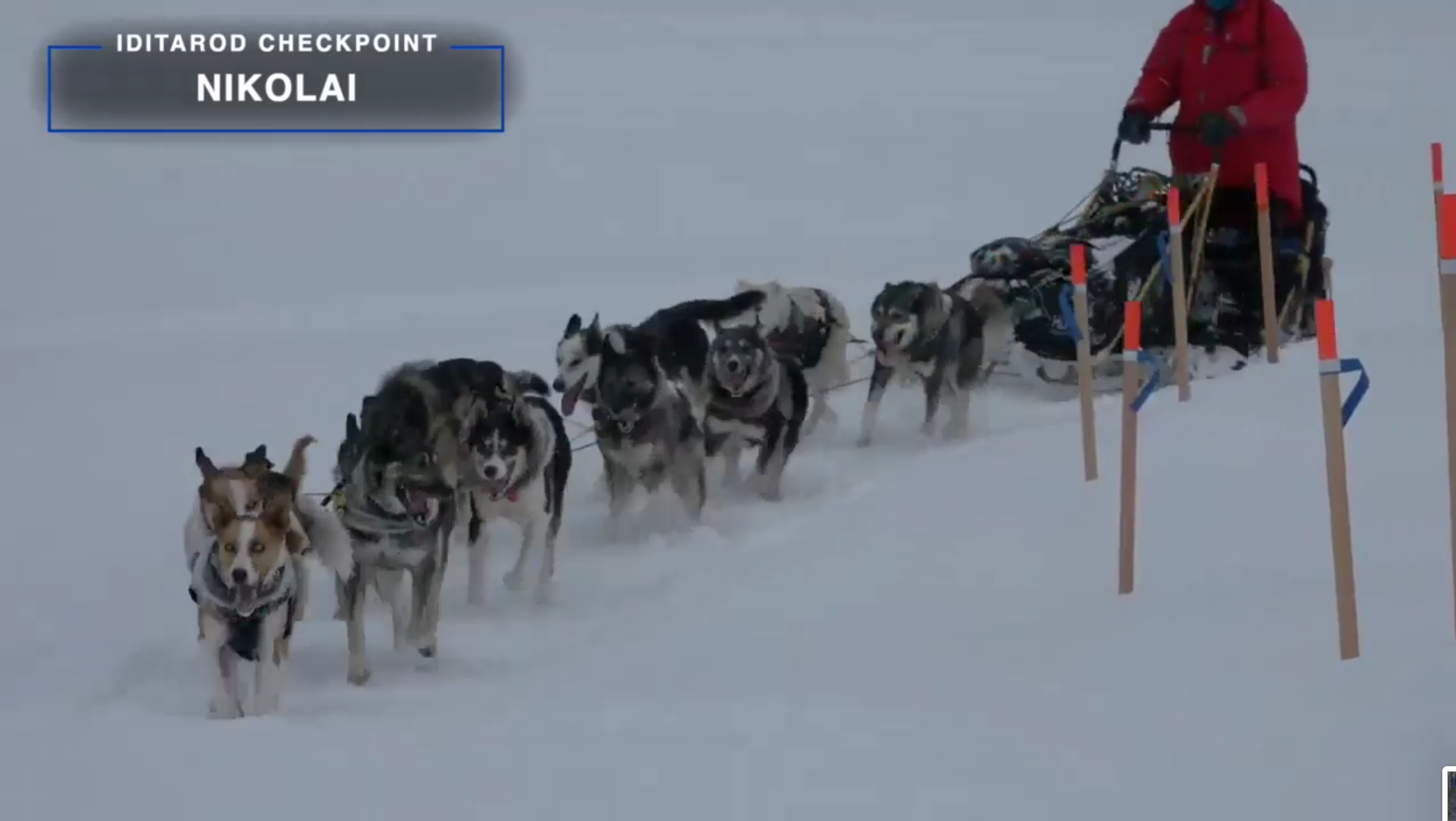 More than three dozen dog sled teams are competing in the iconic race this year.

At the end of last year’s race, Aldrich, who produces a variety of other events during the year, began experimenting with mimoLive video-production software and Intinor encoders and routers as part of his work on high-end corporate golf-outing productions.

“I started using Intinor bonded-cellular gear and routers, along with mimoLive,” says Aldrich, “and that turned into a gold mine for us because it allowed us to do everything remotely and also gave us a greatly expanded feature set that we didn’t have before. That proved to me that we could actually do Iditarod in a similar way. This equipment allows us to send feeds [from Alaska] directly into my control room [in New York] without having to go through a cloud server as we had in the past.” 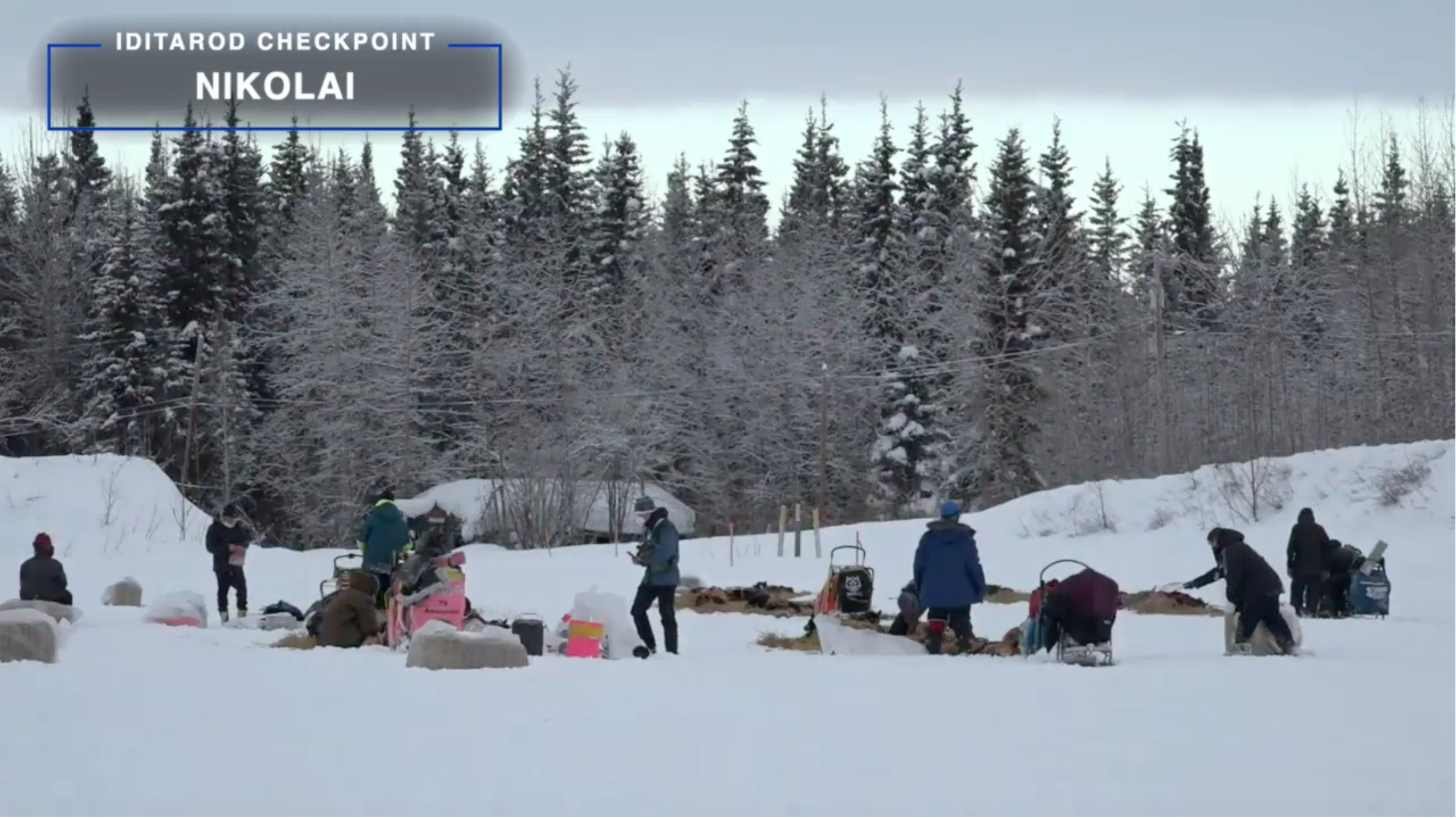 Iditarod Insider subscribers can watch live coverage from each checkpoint.

Since connectivity is always a major challenge in the remote locations of the Iditarod, bonded cellular was not an option for the majority of the trail. Instead, ITC’s telecom partner GCI has provided small V-SAT uplinks (1- to 2-meter dish) that give the Intinor encoders roughly 4/15-Mbps upload/download speed.

“Obviously, [connectivity] is always a challenge out here,” says Aldrich, “but, using HEVC and other newer technologies, you can still get a good picture out with 4-Mbps [upload speed]. Also, in the past, there have definitely been parts of the trail where we had no uplinks available, but, this year, because it’s a loop, some of those checkpoints will light up and actually stay lit for the mushers to come back through. We plan to have more live feeds than we’ve had in the past.”

In the Control Room: Primary in New York, Secondary in Anchorage

This year, the primary control room and live-streaming infrastructure for the 24/7 live stream is located at Aldrich’s home in New York, with a secondary control room in Anchorage. Aldrich cuts the broadcast for one portion of the day, and Iditarod veteran Tom Chatrand serves as TD in Anchorage for the second shift. Both Aldrich and Chatrand essentially operate as a one-man show, serving as producer/director/TD for the broadcast. Christian Schlicht also plays a major role in the production. 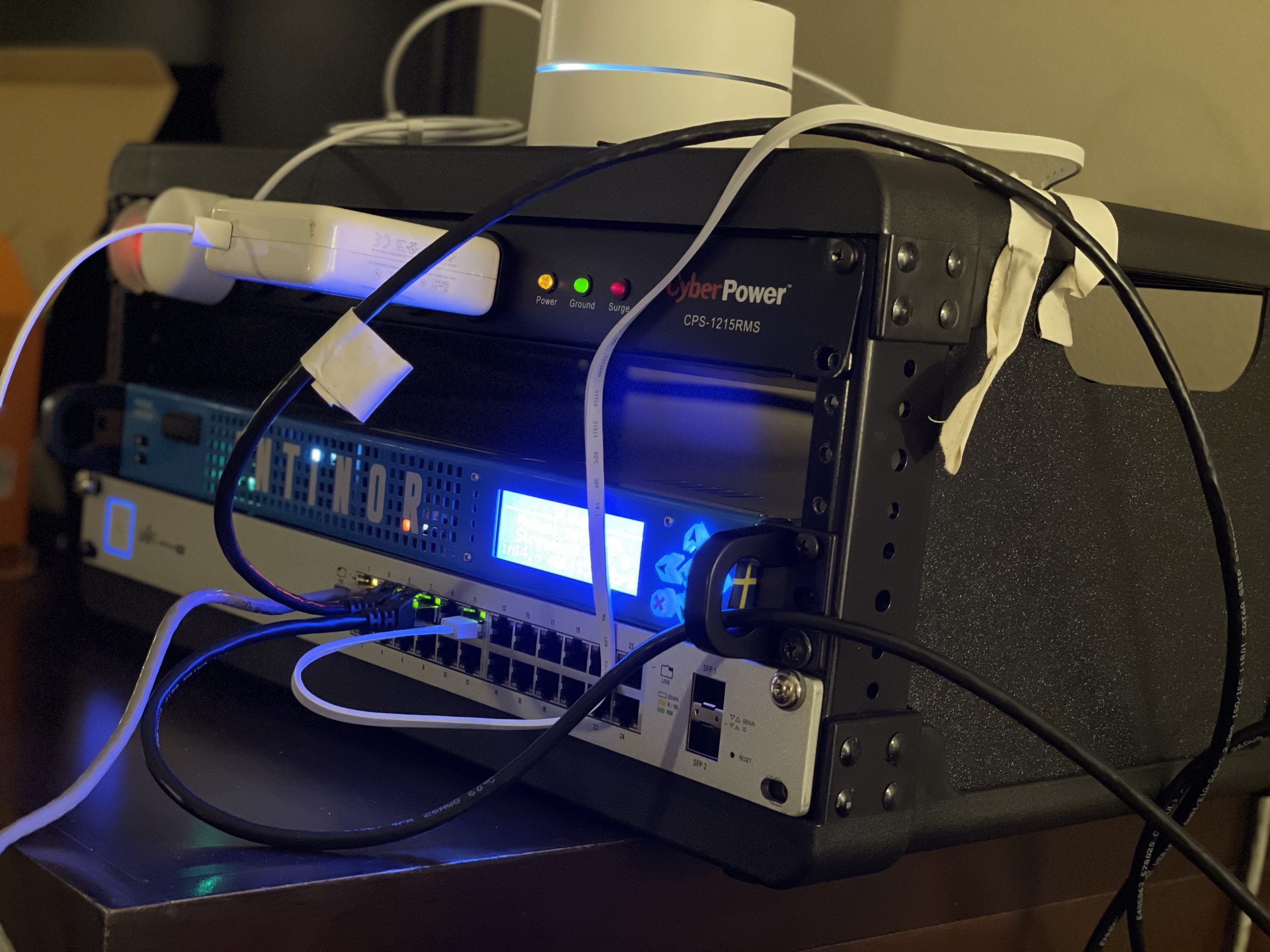 The Iditarod production is deploying Intinor encoders and routers for the first time.

“Last year, I basically was 24/7 in the control room switching feeds,” says Aldrich. “In the middle of the night, if they wanted to do a live hit, they had to call me, get some coffee, and I would light it up. This year, the [Anchorage] control room receives all the redirected [signals] from me, so we are splitting into two shifts. And I have lots of redundancy here: if, for some reason, my control room goes down, the control room in Alaska could take over pretty much instantly.” 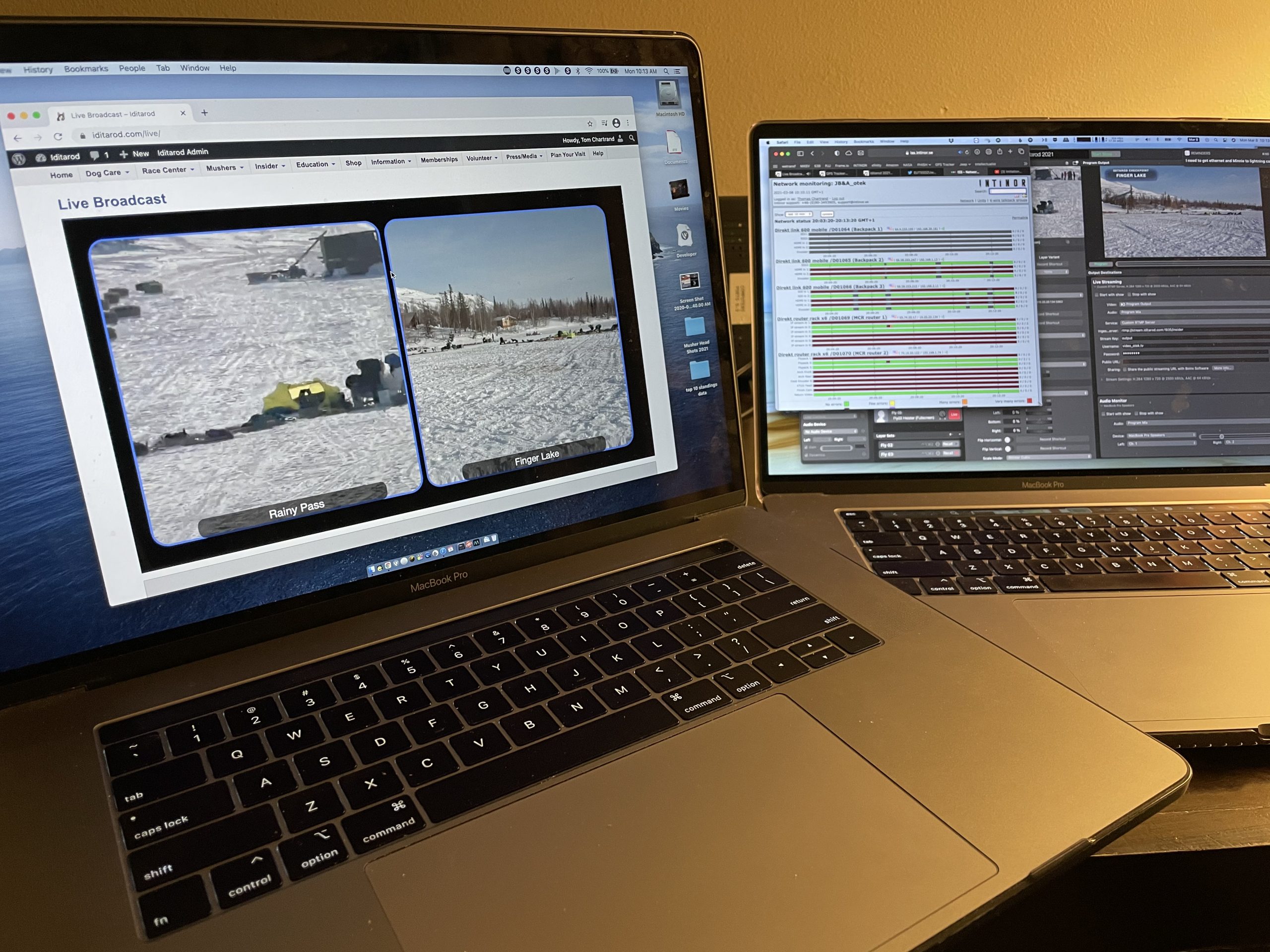 All feeds from the race in Alaska are managed in New York from Art Aldrich’s control room.

As Aldrich produces his first Iditarod from his home in New York, he reflects on what has transpired since his last trip to the trail and what is, hopefully, a bright future ahead.

“One year ago,” he recalls, “as we were still doing the show, we were in Nome wondering if we were going to be able to get home because the airports were shutting down and we were out at the edge of the Bering Sea. Now it’s a year later, and it feels like bookends: last year’s event was the beginning of it, and we hope that this [symbolizes] the beginning of the end of it as we start to see some light ahead [with the pandemic].”