NBC Sports Production of THE PLAYERS Championship Spans the Globe

Teamwork, remote efforts, emphasis on health and safety are key

Last year’s THE PLAYERS Championship didn’t make it beyond the first round as the COVID-19 pandemic caused NBC Sports, Golf Channel, and the rest of the golf world to abruptly end coverage. This year, the NBC Sports team is back at TPC Sawgrass in Ponte Vedra Beach, FL, and is leveraging resources outside the compound in new ways. 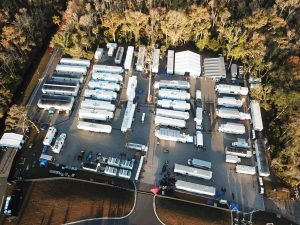 This weekend, says Ken Goss, EVP, remote and studio operations, NBC Sports, the team is back, having worked tirelessly alongside the PGA TOUR and NBC Sports’ Environment, Health and Safety (EHS) team, as well as closely with each other.

Last week, the team was producing the Arnold Palmer Invitational in Orlando, so NEP ND1’s four units parked early at TPC Sawgrass and did a lot of the prep work before ND7 arrived this week and the rest of the operations were put into place.

“We added trucks to keep everyone safe and socially distanced properly onsite,” McAllister explains. “We also have people working in Stamford and in their homes as another safety measure. Crew were tested coming in for the show and will be tested before heading home. Everyone onsite is screened daily by Medcor.

“Making sure everyone is constantly safe is our number-one priority,” she continues.

NBC Sports has 62 cameras on the course, including 28 hard cameras (two shooting at 360 fps for super-slo-mo needs), 18 handhelds, one Inertia Unlimited X-Mo, seven RF minis, one RF Steadicam, an RF drone, and a fixed wing flying overhead. The Live From studio show has 11 cameras, including four Telemetrics on-set robotics operated from Stamford, three hard robos, and the Flycam, which is used on both the tournament and Live From shows.

“We have Flycam on 17, [providing] a breathtaking shot of 17,” notes Caputo. “We also have a camera Tommy Roy added last year that has a high point of view and integrates graphics showing the different weather conditions from the tee box to where the ball lands.”

All told, more than 120 cameras are roaming the course for NBC Sports and PGA TOUR Entertainment. The latter has rolled out its Every Shot Live (ESL) platform at the event for the second straight year.

“We hired about 15 more additional cameramen to cover ESL,” says McAllister. “They are in position and ready to go when the first group tees off in the morning. The ESL group actively covers all groups in the field until play ends.”

As for offsite efforts, some are particularly remote. According to McAllister, an editor is working on the show from Ireland (as they have done all season), and a Brainstorm operator is in Stamford, along with the videoboard production.

Caputo adds that Pinpoint wind and green enhancements are handled in Sky’s UK headquarters (Sky UK’s T-WIZ trailer is onsite at TPC Sawgrass), and ARL is operating from New Zealand’s South Island. TopTracer support is onsite but also in Sweden, and integration is handled in Stamford.

All the signals flowing between TPC Sawgrass and Stamford required four J2K IP bidirectional hitless paths, with 16 channels of audio that are under a gig. Golf transmission via NBC’s NEWBERT flypack has a 600-Mbps IP circuit.

“We also have a gig data circuit for file transfers,” says Bernstein. “As we do more and more production at home, we are figuring out how to do it more efficiently with better encoding.”

The Stamford studios are just as active as the onsite crew. Popple notes that the team is busy from around 6 a.m. until 8 p.m.

“We have robotic control here in Stamford and robotics in the new Studio 7,” he says. “We have a new look in Studio 1 that we are taking advantage of. It looks really great and translates to the screen.”

NEWBERT plays a big role in getting feeds from the course to Stamford so that they can be integrated into pre/post coverage, along with updates throughout, which are done from Studio 1.

“We are also using [Production Control Room 4], which is for Football Night in America and has more firepower and control,” says Popple. “NEWBERT sends everything, and we catch it here. It’s a great team effort, and working together with this team is the best.”

It has been a long year since last year’s PLAYERS Championship was canceled mid-tournament, but McAllister says things are moving in the right direction, with health and safety protocols observed.

“Every day is a little bit better, and there is a light at the end of the tunnel.” she says. “We’re getting there.”

The NBC Sports golf team has a busy summer ahead. It will produce host-broadcast coverage of golf at the Olympics, which will run July 23–Aug. 8. Also on the schedule are the U.S. Open at Torrey Pines in June, the Open Championship at Royal St. Georges in July, and the Ryder Cup in September.

Adds Goss, “There are positive steps every week, and we just stick to the protocols and guidance from EHS. The goal is to keep everyone safe, and the collaboration between operations and EHS has been seamless and terrific.”