This year’s NCAA Women’s Basketball Tournament has had a certain “juice” to it.

Whether you chalk it up to the star power, the controversial endings, the sheer impact of female athletes fearlessly raising their voices against inequality, or some combination of it all, there’s little denying that this year’s Women’s side of March Madness has caught the attention of the sports world.

For someone who has worked on this event for a long time, it’s a dream come true. 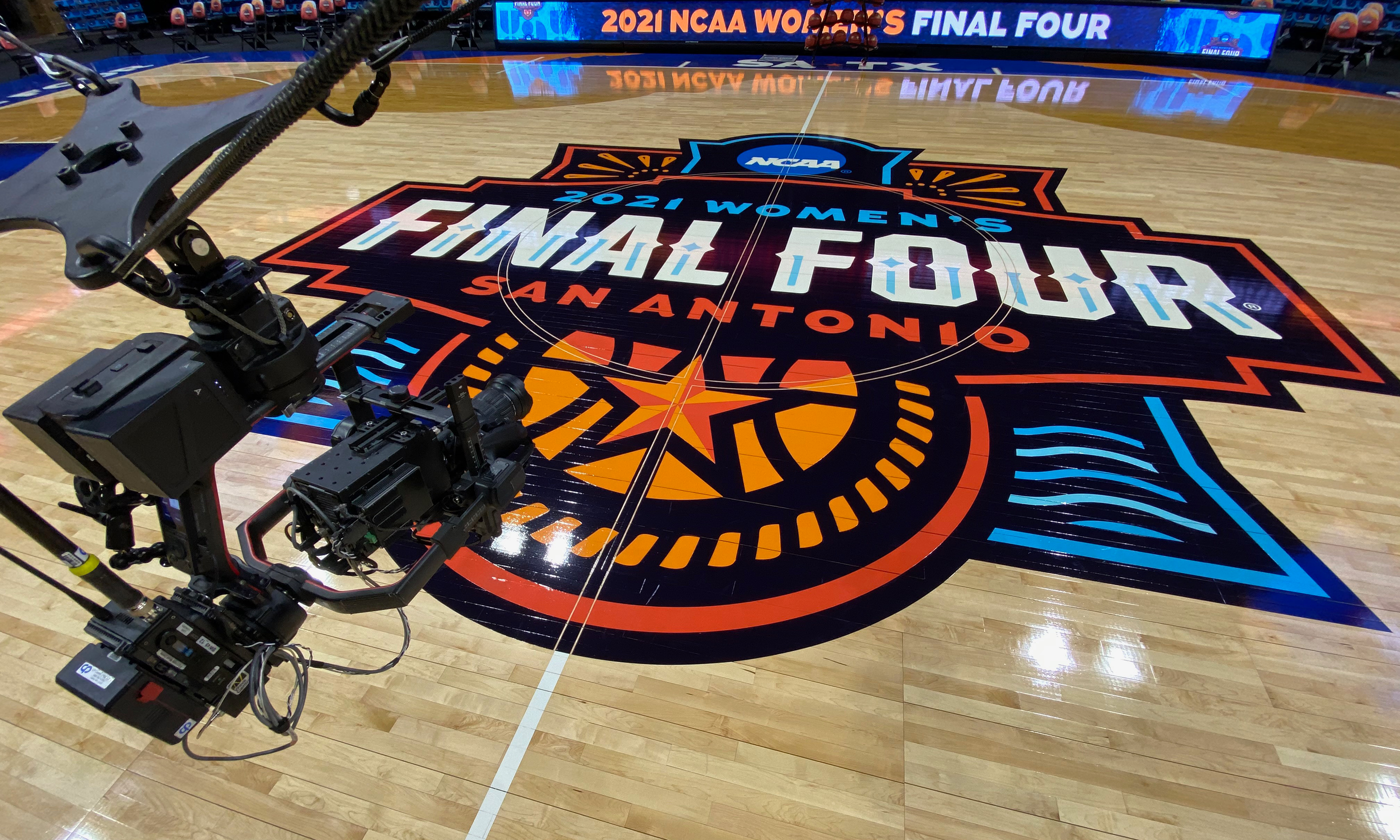 The NCAA Women’s Basketball Final Four tips off tonight at the Alamodome in San Antonio. New to ESPN’s coverage this weekend is use of a SupraCam aerial camera system. (All photos courtesy Pat Lowry, ESPN)

“I’ve worked on this tournament for years, and it has always been my dream job,” says ESPN Coordinating Producer Pat Lowry, a veteran of ESPN since 2002. “This year has felt extra special because it feels like more people are taking it in, appreciating it, and seeing the level of play from the incredible student athletes. The extra coverage has been fantastic; the games have been fantastic. For somebody who has worked on it for this long, to see it get its due has been awesome.”

Now it’s time for the grand finale, and, despite COVID protocols and new safety-driven workflows, it’s an impressive onsite effort at San Antonio’s Alamodome as ESPN gives this exciting tournament a proper sendoff.

Onsite at the Alamodome, ESPN has more than 120 staffers, all five trucks of the network’s NEP EN1 mobile production unit, more than 20 cameras, an indoor aerial-camera system, a modified animations package, and a bevy of other extras to help bring added dimension to this championship event.

One of the most notable silver linings in the bubble execution of this year’s tournament was that games were played at the Final Four venue from the first round. That meant that ESPN was able to set up more production enhancements earlier and use them on more games, rather than wait to deploy them only for the tournament’s final weekend.

The most prominent example of that has been the use of a RailCam, which has been in position and shooting games on one of the Alamodome’s two courts since the Sweet 16. Getting the RailCam into the mix early has proved beneficial, allowing director Jimmy Platt (who also directs Monday Night Football for ESPN) more reps with the angle to build comfort with it. 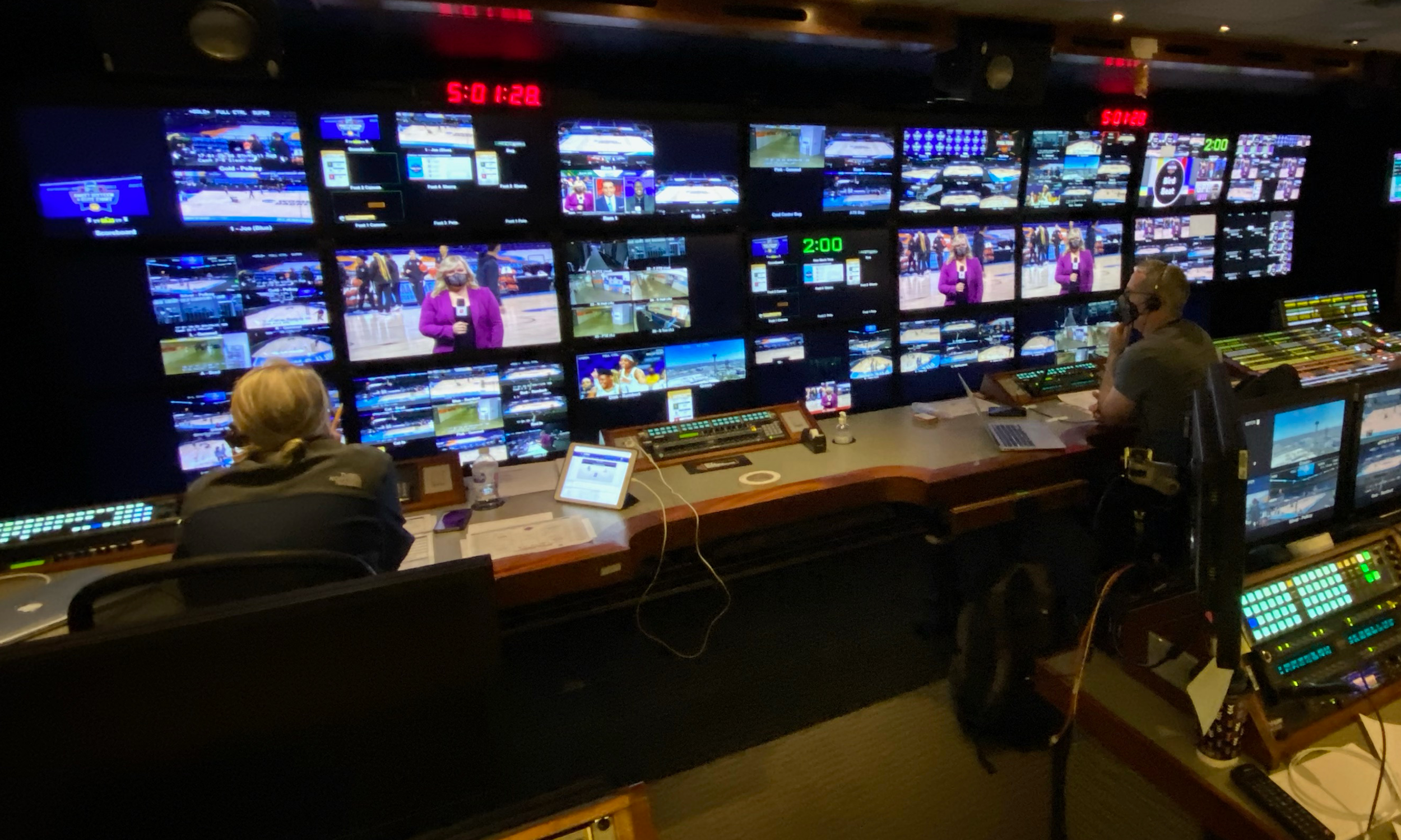 NEP’s EN1 production truck is onsite. Inside, the producer/director team of Kerry Callahan (left) and Jimmy Platt get rehearsals at the front bench.

“The RailCam has been a great addition,” says Lowry, “We wanted Jimmy to have time to get in a good cadence with that camera in the complement. Anytime you add something like that, you don’t want to overdo it, but you want to take advantage of it. He has had the opportunity to use it on three games before getting into the Final Four, which we felt was important.”

Lowry also notes that the production team has been pleased with both the camera’s height and its positioning to the court. Social distancing and the limited number of fans in attendance helped give ESPN greater flexibility in deploying the complex system. When ESPN used a similar system in the NBA bubble last summer, it sat much higher off the court. Here, the women’s hoops crew has achieved the much lower look desired.

“This was the look we wanted to get from it,” Lowry explains. “We don’t have any handheld cameras, [but] we’re getting the center-handheld look we used to get and more from the RailCam.”

New for the Final Four and the Championship Game is an aerial-camera system supplied by Oklahoma-based SupraCam. ESPN has deployed the company’s aerial unit for the past two Final Fours.

Other camera highlights include a pair of super-slo-mos at the slash positions, four Fletchers (above and below each rim), PTZs mounted in the hallways leading from the floor to the locker rooms, and eight Marshall cameras strategically placed around the building for various scenic shots.

A major onsite absence this year is the studio show, which ESPN elected to keep back home in Bristol, CT. It’s a sacrifice that the team wasn’t happy to have to make, but it helped minimize the crew’s footprint onsite while allowing the group working on that end of the production to spread their wings and take advantage of the resources in Bristol.

Coordinating Producer, Special Events, Kate Jackson and Director Josslyn Myers have done just that, pulling out everything from virtual graphics to lighting the exterior of the ESPN campus and using drones to capture the sites of the iconic Bristol facility.

“We wanted to give this that big important feel that we weren’t able to do because we didn’t have studio onsite,” says Lowry. “What they have done in studio has been an incredible accomplishment.”

History in the Producer’s Chair

Kerry Callahan is the first woman to sit in the producer’s chair for the NCAA Women’s Basketball Championship since ESPN began broadcasting it in 1995.

Among all the technology and on-the-court hype, this year’s Women’s Final Four is also witnessing a notable milestone at the front bench. Kerry Callahan will sit alongside director Platt as producer, making her the first woman to take the producer’s chair since ESPN began broadcasting this event in 1995.

“She was 100% the best person for the job,” says Lowry. “We could have picked almost anybody in the company to produce this event, and she was the right person. I worked with her a long time ago on the NBA when she was an associate producer, and she has worked her way up to this point in her career.”

Lowry notes that Callahan was in line to produce the NCAA Women’s Final Four last year. That was, of course, before the entire tournament was canceled by the coronavirus pandemic.

A Tournament Unlike Any Other

ESPN reporter Holly Rowe has a special workstation positioned courtside at the Alamodome.

Like every other high-profile live sports production of the past 12 months, this year’s NCAA Women’s Basketball Tournament is different from its predecessors.

Instead of taking place in multiple venues across the country, the 2021 event took place in Texas, almost entirely in the city of San Antonio (sites in Austin and San Marcos also hosted early-round games). That led to the need for an entirely new operational strategy.

ESPN Manager, Remote Operations, Erin Orr played a key role in coordinating the sites, including accommodating the unique nature of the Alamodome, whose bowl the NCAA split to accommodate two courts in the early rounds. To handle it, the NEP EN1 truck onsite produced live games from one of the courts, and the other court’s games were produced via REMI, with EN1 sending 10 paths to Bristol for that game to be called and cut.

“It has been a unique and interesting way of doing it,” says Lowry. “Add to that, doing all of this with a condensed timeframe around team practice schedules due to COVID protocols. It is a complicated situation, but Erin and the operations team have come through for us.” 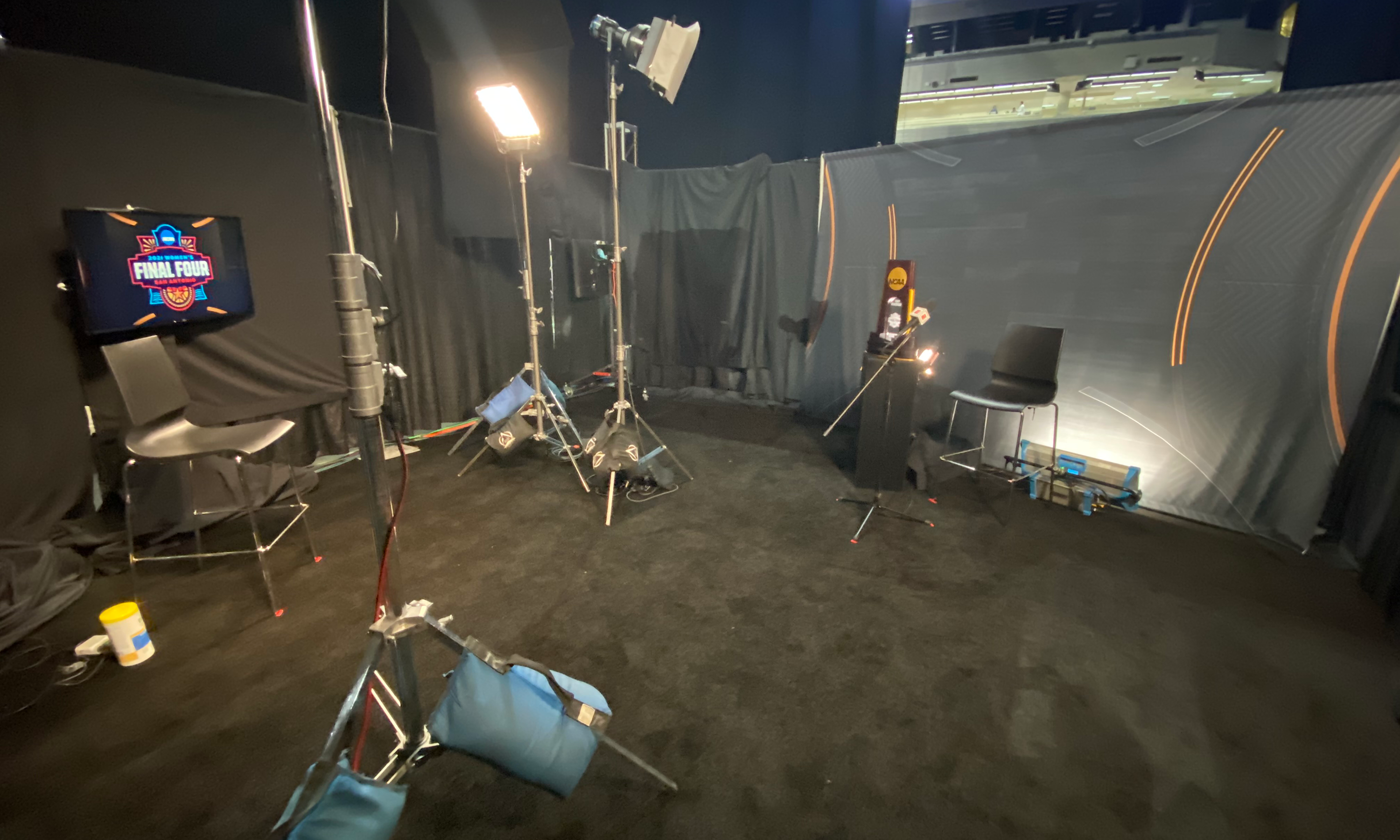 In nearby convention center, contactless stations allow ESPN talent and producers to safely conduct video interviews with athletes and coaches from all the schools involved in this year’s tournament.

The operations team used space in the neighboring Henry B. González Convention Center to set up contactless interview stations. There, ESPN talent and producers could conduct interviews with players and coaches for the entire field of 64 teams in a safe environment.

Additionally, no on-air talent (with the exception of reporter Holly Rowe) was onsite at any NCAA Women’s Basketball Tournament games until the start of the Sweet 16. Lowry and her team deployed the company’s “Live From Home” kits that have become some popular since the start of the pandemic a year ago. The relatively easy-to-set-up kit allows on-air talent to broadcast from virtually anywhere, typically their own homes. A total of 32 games were broadcast using these kits over just two days.

“Thirteen months ago,” says Lowry, “we would never have dreamed of producing these games with talent at home.”

Numerous facilities in the ESPN family were leveraged for REMI production to broadcast early-round games. Two REMI control rooms were up and running in Charlotte, NC; one in Orlando helped out, as did another in Bristol. Even ESPN’s Longhorn Network staff and facilities were enlisted to support the games played in Austin.

“This championship is just a lot of everyone coming together to make everything better,” says Lowry. “It has been great to be a part of this team.”