Whether it’s sports, esports, or music, the live streaming industry is growing faster than ever. While it’s hard to determine who reigns the streaming throne, during the past years Facebook and Twitch have worked in a number of features and APIs to help content creators deliver a more interactive viewing experience. Flowics has announced a new “Streaming Extensions” module which offers new tools to extend the viewer experience on livestreams on Twitch and Facebook Live with client-side interaction, integrated with the video player. 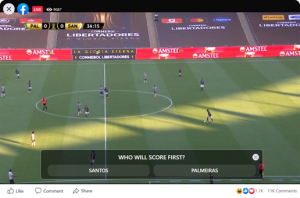 This new module is the evolution of the company’s existing support for FB Live Polls & Questions. With FB Live Polls, you can add interactive overlays to your livestream on Facebook to let viewers participate in polls or quizzes.

With FB Live Questions, you can ask viewers for comments and opinions in private, curate responses and organize them in playlists for on-air integration.

The most recent addition to the platform is the new Flowics Twitch Overlay Extension for Polling & Quizzes.

With this new extension, Flowics users will now be able to add interactive overlays (or side panels in the Twitch iOS and Android apps) to their streams on Twitch and create polls and quizzes to engage viewers.

How does the Twitch Overlay extension work?

The Twitch extension can be customized to your own branding and used to play a list of polls or quizzes during your stream.

See the following video to see how to use it:

Both the Twitch and Facebook extensions can seamlessly integrate with our Middleware and Graphics module, enabling users to integrate live results with their on-stream graphics.