Last week’s Daily Wager Special broadcast of the Brooklyn Nets–Philadelphia 76ers matchup marked ESPN’s largest sports-betting–focused game production to date. The April 14 alternative broadcast, which was carried on ESPN+ and ESPN2 alongside the traditional broadcast on ESPN, was a glimpse into what viewers can expect from ESPN as it looks to capitalize of the rapid growth of legalized sports betting in the U.S.

“We’re excited to do as much live [in-game content] as possible,” says ESPN Senior Coordinating Producer, Sports Betting and Fantasy Sports, Scott Clark, who oversaw last week’s production. “It’s obviously something that’s just getting started in the market because of legalization, and we want to be ready for what’s coming.”

The Philosophy: Catering to Bettors and Non-Bettors Alike

Although the Daily Wager Special marked ESPN’s first alternative presentation fully driven by sports-betting content, it wasn’t the first to have a betting aspect to it. In January for its MegaCast presentation of the AFC Wild Card Game, the Between the Lines alternative feed on ESPN+ featured the teams from both NFL Live and Daily Wager, providing a mix of old-school analysis, new-age analytics, and sports-betting information. 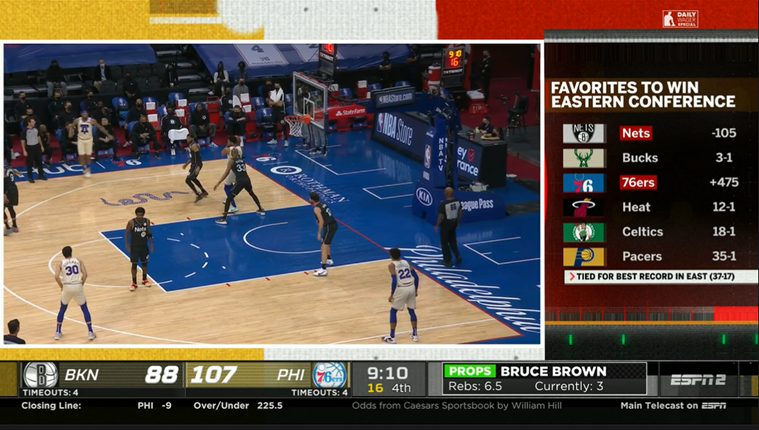 With the Between the Lines experience under their belt, Clark and the Daily Wager team were looking to create for its first NBA game a broadcast that would serve not only the hardcore bettor but the casual NBA fan as well.

“Since we were on linear TV, we knew we would have a varied audience in terms of their avidity for gambling,” says Clark. “You could have anywhere from someone who is a very avid passionate sports bettor to someone who was just flipping through channels and ended up on ESPN2. We needed to hit both those notes. We decided not to hold back in terms of sophistication and betting [analysis], but we also made sure to explain some of basic betting terms and concepts throughout [the broadcast].”

That duality came into play as the production team and on-air talent began to consider how to integrate traditional play-by-play into a betting-centric broadcast.

“We didn’t want a strictly traditional play-by-play call like you would normally see on ESPN,” says Clark. “We wanted it to be more conversational, but, of course, we had to have some level of play-by-play and acknowledge what’s happening on the court. So we ended up having [our announcers] conversing about the betting aspects, and then our host Doug Kezirian would cut in and just simply say, ‘Layup by Simmons, Sixers up five’.”

Kezirian, Fortenbaugh, Fulghum, and ESPN NBA analyst Kendrick Perkins also regularly appeared on-screen as the game action was taking place to “give a face to the voice,” says Clark.

The Production Team: At Home in Bristol

Daily Wager’s home is a 6,000-sq.-ft. 4K/1080p production facility on the Vegas Strip that includes three studios and features 12 cameras, including two exterior robotic cameras. The studio is designed around REMI and does not have an accompanying control room onsite. Instead, camera/audio feeds are sent to a control room at ESPN’s HQ in Bristol, CT, where the Daily Wager production team is on hand to produce the show. 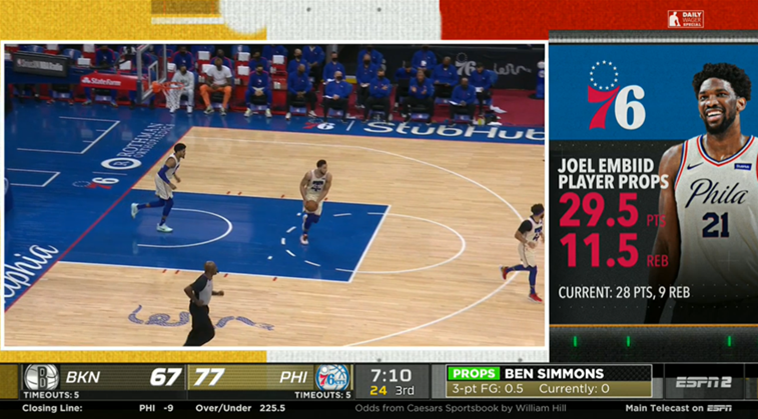 Daily Wager–style slab graphics displayed periodically on the right side of ESPN’s betting-focused presentation, showing key prop bets and odds during the game.

Clark and Daily Wager director Ed Curran were in constant communication with Rodney Vaughn, producer for ESPN’s primary NBA broadcast, to ensure that they were aligned on commercial breaks and key moments during the game. In addition, ESPN Senior Coordinating Producer Ed Placey, one of the key leaders of the network’s MegaCast productions for the College Football Playoff, worked closely with the Daily Wager team to develop the graphics and operations workflow.

“Everyone on the production side is used to studio productions, so this is very new to us,” says Clark. “We were able to do a rehearsal game, but we really had to feel it out as the game went on. A lot of this stuff was very foreign to us, so we had to figure out how to navigate that through the game. But I think we felt really comfortable by the time the second half started.”

The Between the Lines MegaCast feed at the AFC Wild Card Game featured an ultra-aggressive graphics presentation with an L-bar crammed with stats, analytics, and betting data. For the NBA production, however, Clark and company opted for a more traditional look leveraging the scorebug graphic 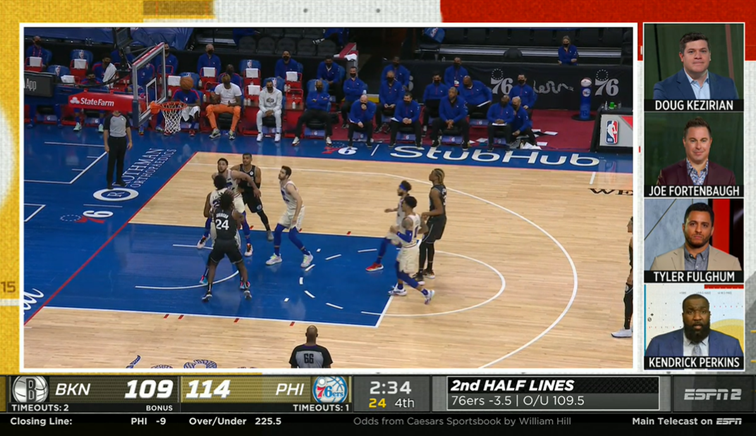 “Especially since this one was going to be on linear TV,” Clark explains, “we wanted it to look  more like a normal game when we’re on full game action. So we took the scorebug from the main ESPN broadcast and built graphics to overlay on top of that. That became the primary location to [display] odds, props, the closing line, and other information.”

The left side of this revised scorebug displayed the standard clock-and-score information, and a rotating series of prop-bet information was positioned on the right. Below the bug, the Daily Wager production team used the “bottom line” area to display the Closing Line, Over/Under, and Sportsbook attribution (odds were supplied by Caesars Sportsbook by William Hill).

The presentation also periodically slid in slab graphics on the right side of the screen (based on the Daily Wager graphics package) showing key prop bets and odds as the game progressed.

“That was something that, honestly, we had to feel out during the game: how often and when we would have time to slide those graphics in,” says Clark. “As the game went along, we got more comfortable, and the production team adjusted and added some of more those props. We were significantly more aggressive in the second half with those than we were in the first half.”

The Future: Bringing in the Live Line, Expanding Beyond NBA

According to Clark, feedback — both via social media and internally at ESPN — was largely positive for Daily Wager’s initial production. He says proper mix between a traditional sports broadcast and a data- and graphics-heavy presentation will continue to be a moving target, but he considers the initial compromise a success. 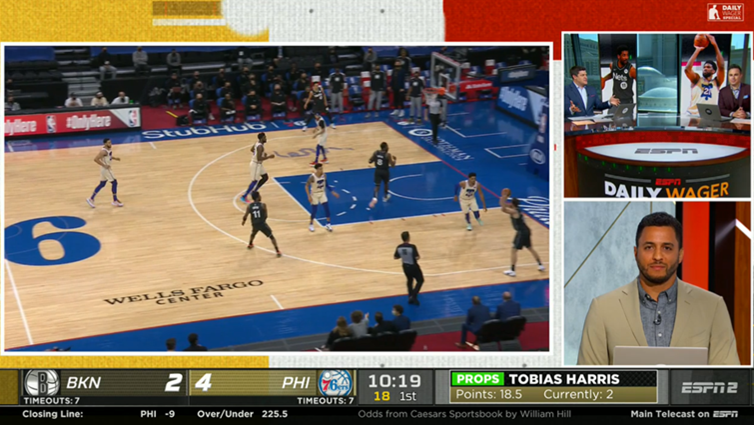 Daily Wager’s on-air analysts were consistently integrated on-screen into the broadcast during the NBA presentation.

“That’s something we have to figure out on the automation side for basketball,” he says. “With football and most other sports, it’s a lot easier because you can just update it manually. That’s not realistic with the pacing of basketball, but we definitely want that constantly updated live line to be a permanent part of the main graphics presentation to help drive our conversations.”

Although no official announcements have been made, the Nets-Sixers matchup isn’t likely to be a one-off for ESPN and the Daily Wager production team.

“At the Daily Wager, we would love to do more NBA, either in regular season or playoffs,” says Clark. “And we would love to expand to other sports that we think would fit really well from a pacing standpoint — whether that’s golf or baseball or football. It’s just a matter of having the conversations with the leagues and seeing what we can get done. But, on the Daily Wager side, we are fully invested in doing live broadcasts and would love to be involved in these live windows as much as possible.”