The Sports Video Group has partnered with Leader to look at the future of live HDR production with a seminar taking place on Thursday, May 13 at 11:30 a.m. ET. 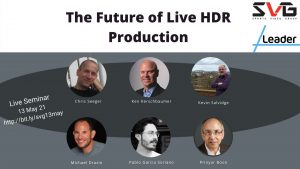 Summer 2020 should have been the watershed season for both HDR and UHD TV production. In Europe, the UEFA Euro football championships were scheduled to be followed by the Summer Olympics in Tokyo. Both events were going to make use of these new technologies and provide the impetus for future live sport OB coverage.

However, the COVID-19 pandemic put pay to practically all large scale sport, forcing broadcasters and production companies to adjust their technology and focus on new remote workflows.

During the transition from SD to HD in the early 2000’s, the skeptics had a field day bemoaning the new technology when images were viewed in ‘non-optimal’ circumstances. This is even more true today with UHD TV. Many people have already seen UHD TV, and to the untrained eye, they don’t see any difference. If you’re going to do UHD, you’ve got to do it well at every step of the production. Resolution alone will not deliver the ‘wow-factor’ to a production; you have to include wide color gamut (WCG), HDR and immersive audio, along with enough bandwidth into the home. Cut any of those corners and the skeptics will complain that they don’t see the point.