With operations across the globe, remote contribution continues to be important

When it comes to planning a golf major, CBS Sports’ production team definitely has its reps in, having planned six of them in the past 15 months and broadcast four of those. This weekend’s PGA Championship at Kiawah Island in South Carolina marks the end of those efforts, and, during the run, the team has learned to work in new ways.

The 4D Replay system will give CBS Sports analysts a great chance to dive deep into the swings of PGA professionals this weekend.

“It’s almost the norm now to have remote contributors,” says Mike Francis, VP, remote engineering and planning, CBS Sports. “We have two editors in New York, and our wind graphics are actually operated out of the UK. And we have nine virtual-graphics operators in New Zealand and replay operators in Maine, Oklahoma, and Texas. And all of the tracing operation is working in Clifton, NJ, at Freedom Studios. So we’re fairly distributed again.”

“One is a technical building that houses eight graphics rooms, a few announce booths, and an infrastructure flypack that manages all of the signal distribution,” says Francis. “Those are the highlights of the compound, along with a couple of alligators.” 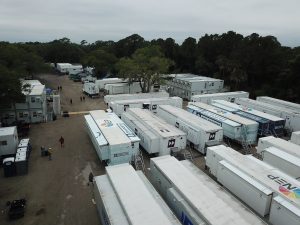 The infrastructure flypack is a scaled-up version of the one CBS Sports used at The Masters in April.

“We’re up to seven shows here,” he explains. “We’ve added a featured-groups channel as well as a featured-holes channel and also On the Range for CBS Sports Network.”

One of the new things CBS Sports will try to capture at the PGA Championship relates to the weather. In 2012, the tournament was played at Kiawah Island in August, when weather conditions are very different from in May. Topping the list of differences is wind, which is much more a factor in May and has the CBS team rolling out anemometers across all 18 holes.

Over the four rounds of play, the CBS production team will take the wind-measurement data and crunch it so that viewers can see how the wind direction changes from one round to the next and how it affects driving distance and club selection.

Says Jason Cohen, VP, remote technical operations, CBS Sports, “The adjusted yardage is one of the things we’re going to try to play with a little bit, even adding some personnel to help feed rapid information to talent so they can tell the story of what the wind is doing.”

The show itself will have 100 cameras on the course (as well as 84 cameras for a 4D system around the 15th tee box). Among the highlights are two robotic cameras that will be placed in the famous bunkers on the 17th hole. That hole, a par 3, has a water hazard up the right-hand side, which makes hitting into the bunkers a safe bet for players concerned with hitting the water and losing a stroke. It also means that the cameras in the bunkers will capture plenty of action.

“This tournament has always been a hotbed of fun toys and technologies,” notes Cohen. “We like to experiment with some cool innovations. [CBS Sports Lead Golf Producer] Sellers Shy and Milton said we have to get something in these two enormous bunkers on 17 green.” 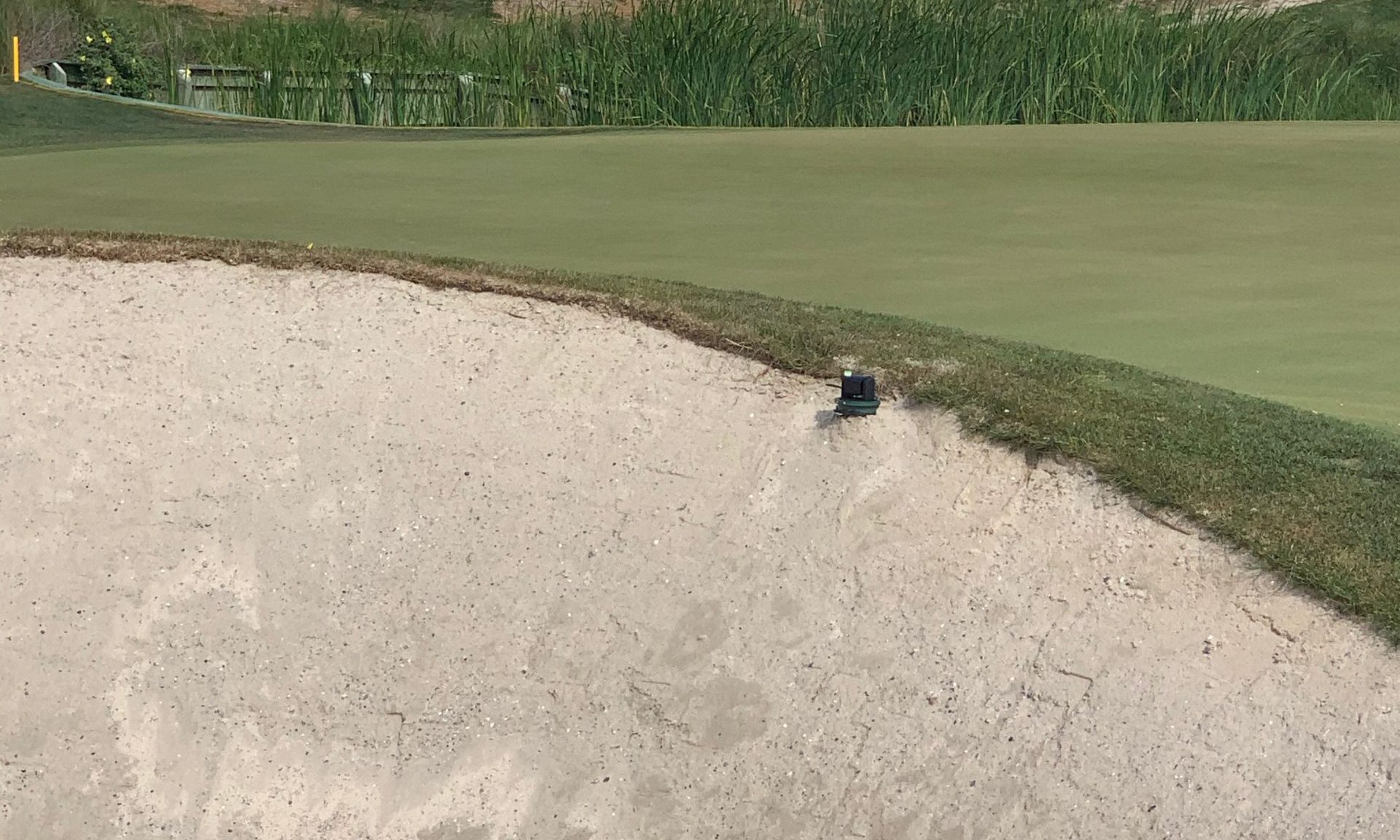 Two bunker cams at the 17th hole promise dramatic shots this weekend at the PGA Championship.

BSI installed two micro robos in the lip of the bunker, each able to pan and tilt (the hole will also have an incoming-shot tracer to show the ball’s flight from behind the green).

“Both robotic cameras are wired,” adds Cohen. “The PGA of America has helped us lay a trench for the cables through the bunker, and we fibered it back to the compound. We can reposition it from day to day if the pin changes.”

“It’s a great run that starts over the practice range and will be able to run from there to essentially the beach,” says Francis. “In between, there is the putting green, the 18th green, and the driving range.”

And, yes, drones are once again part of the plan, handled by Kaze Aerials. Cohen says the team came out earlier this month to capture course footage for various needs, including virtual flyovers.

“They are doing live drone work basically starting [May 18] and then through the weekend,” adds Cohen.

Milton says the drone, which will be complemented by a blimp overhead, offers a more three-dimensional look because the viewer can see down the course.

“With the blimp,” he says, “you don’t see slope, and you don’t see angles, so you don’t really get the player’s perspective. The drone can go as low as 12 or 15 ft. and as high as 250 ft., so you get the dynamics of flying really low and seeing the slope, the berms from the sea, and all the trouble.”

Adding a new dimension to all those camera technologies is the return of big-time crowds for a big-time golf event. The Atlas cam will be used for shallow-depth-of-field shots, and Milton expects the presence of fans onsite to give that camera even more impact.

“With fans, we have more opportunities to use it inside and outside the ropes,” he explains. “When we first used it for football, I thought it would never work for golf, and we would never be able to get close to them. But I was blown away with what we did with it at The Masters, because it brought a lot more drama than we thought. And the addition of the colors of the crowd will give us a brand-new look.”

The crowds also make a difference for the on-course reporters, who will be onsite instead of calling off tube.

“It adds energy, and they feel connected to the event,” says Harold Bryant, executive producer/EVP, production, CBS Sports. “They can watch warmups and capture more nuances of the tournament than they can if they were just seeing it on a monitor. They can feel the swell and the energy of a crowd. They can go to the practice range and catch a couple of socially distanced interviews. And then there are things you might not see on-camera — like a player eating a peanut butter sandwich — that let them sprinkle in more color.”

Despite all the crowds, a result of relaxing COVID-19 guidelines, the CBS Sports production team is committed to all the safety protocols that have served it well this season and last.

“We’re still maintaining many of our protocols, including mask mandates,” says Patty Power, EVP, operations and engineering, CBS Sports. Noting that there are crew members who haven’t been vaccinated, she adds, “We’ve got to make sure we keep the whole crew safe. That’s the best approach for now.”

Bryant adds that everyone is on board with the guidelines. “People are respecting the rules, and we’re adapting as well. It has been a pretty smooth process.”