SMT’s team is stationed in Durham, NC, and the PFL fights are in Atlantic City

SMT has been a key cog in the Pro Fighters League machine since it launched in 2019, capturing a tsunami of data from inside the “SmartCage” and churning out next-gen analytics that are among the most advanced in all of MMA. However, with the pandemic limiting the size of onsite crew for PFL productions this year in Atlantic City, NJ, SMT was suddenly forced to rethink its operation under a remote scenario. Enter SMT’s new ROOSTER (Remote Optics Operator Staffing & Technology for Eliminating Risk) production model. 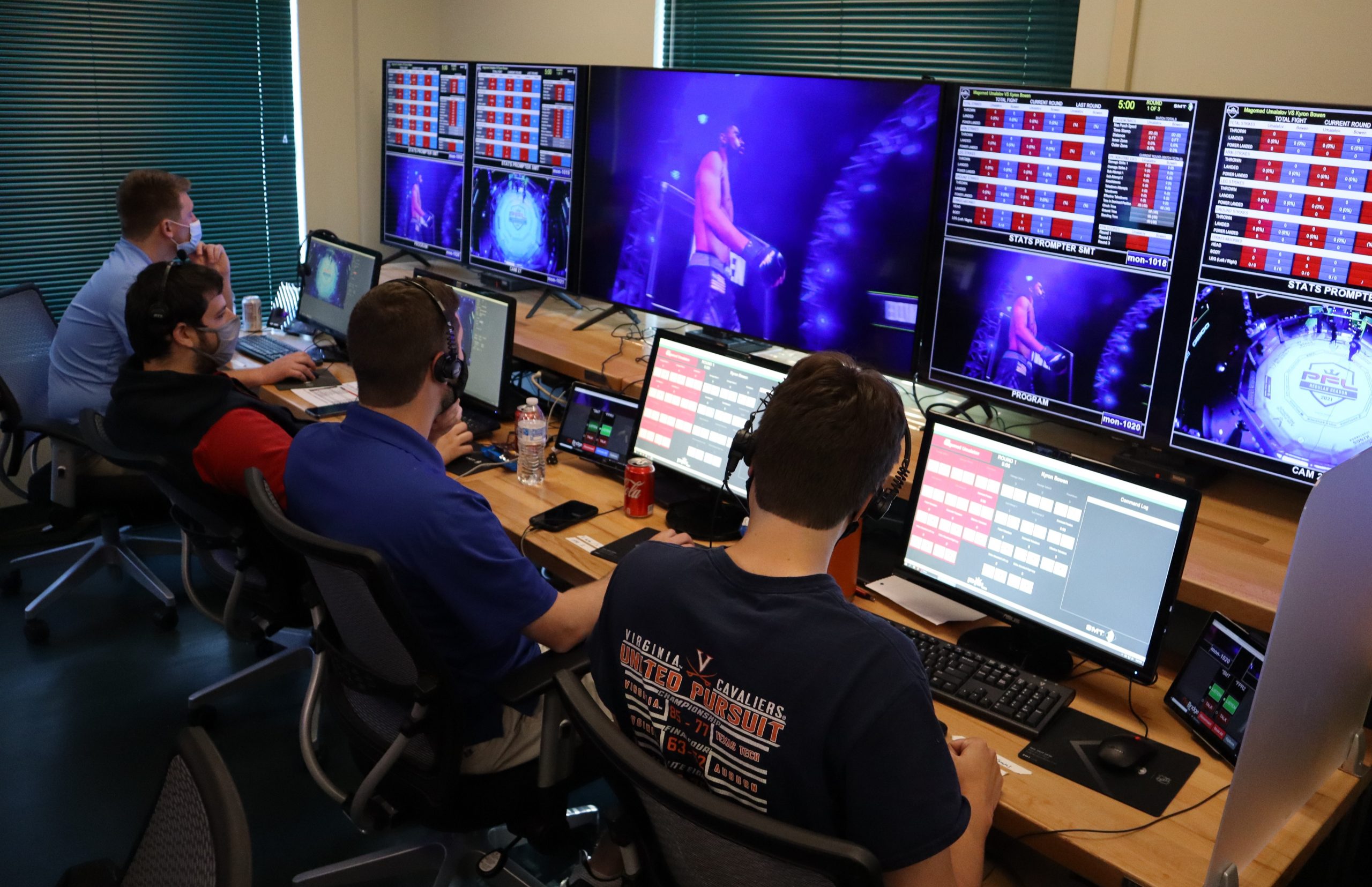 A total of 15 SMT personnel are working remotely from Durham, NC, for Pro Fighters League shows.

“With the challenges posed in a COVID environment, we needed to come up with alternative ways to provide the same deliverables for PFL shows,” says Robbie Louthan, SVP, business development, SMT. “This particular event is unique for us because SMT has such a large amount of resources dedicated to every show. We typically have had 13 SMT support personnel for every PFL show, and trying to have 13 resources onsite in a COVID environment just wasn’t feasible. It really was a unique opportunity for us to deliver the same product and service suite with minimal onsite footprint and minimal impact to the final on-air product.”

Partnership Built on the Power of Data, Out-of-the-Box Thinking 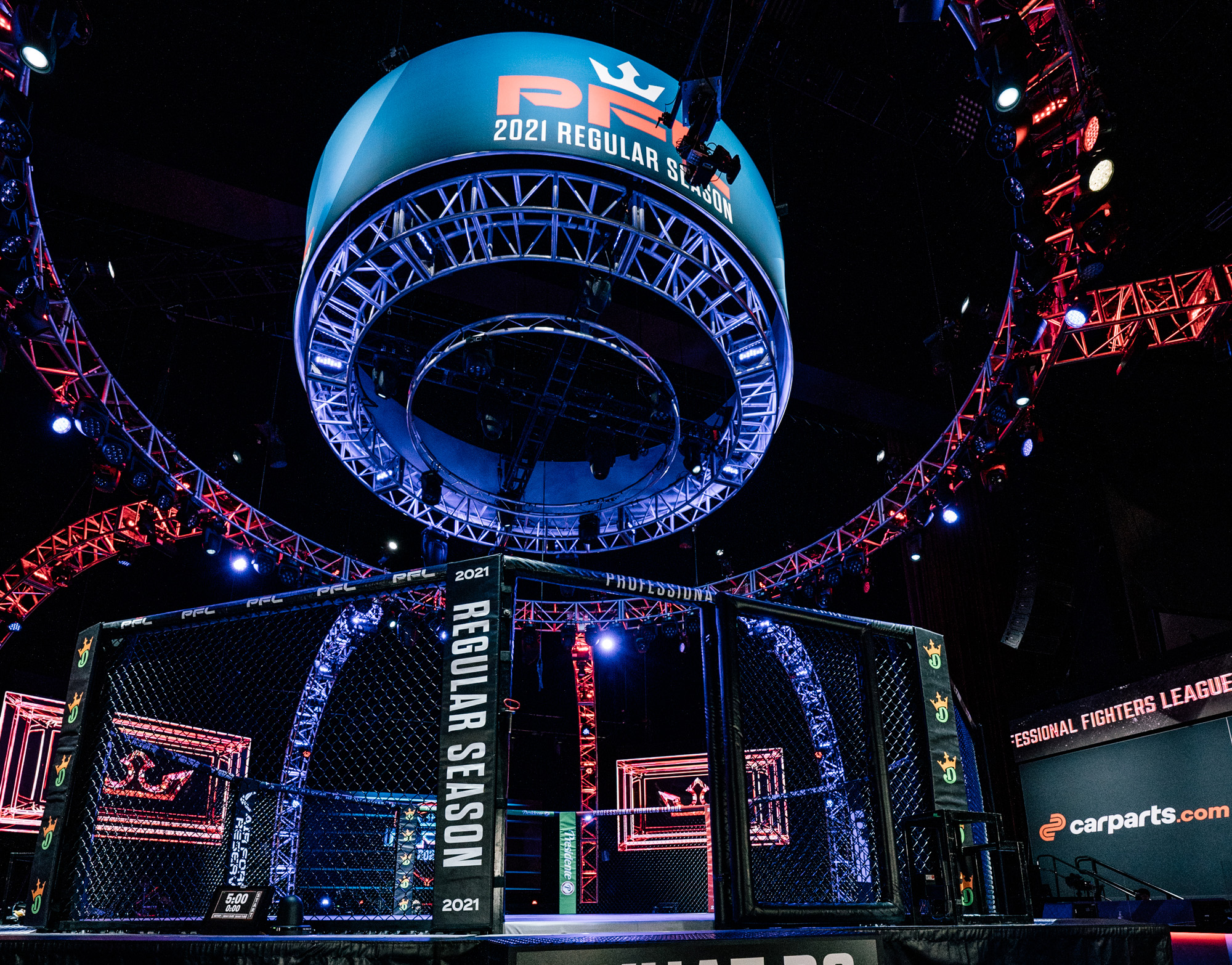 SMT provides proprietary technology that combines live scoring with real-time biometric and positional data for PFL, which has made data-centric storytelling a priority in its broadcasts. Dubbed Cagenomics, SMT’s fighter-tracking offers live punch-speed data (transmitted by SMT-developed sensors worn inside PFL gloves), power ratings, heart-rate tracking, and energy exerted. New in the data complement is Fighter Performance Rating (FPR), and the launch of a kick-speed metric is expected soon.

This data is displayed on the stats prompter for the commentators and integrated into on-air graphics. SMT’s OASIS Platform seamlessly integrates and combines live scoring with this biometric and positional data to enhance the analysis, storytelling, and graphic presentation.

“The PFL truly thinks outside the box,” says Louthan. “They know what has been done in the past, and they are trying to create a unique brand using technology, and their SmartCage is core to that mission. For us, it’s a dream partnership in the sense that this is an organization that is open to any crazy out-of-the-box idea we want to pitch their way; nothing is off the table. So it has been a tremendous collaboration that allows us to come up with some very unique and cool things.”

Professional Fighters League Executive Producer George Greenberg seconds that notion: “SMT has been by our side since day one. Of course, there were growing pains, but, if there’s a problem, they’re going to solve it. Anytime we’ve had a crazy idea, they are smart enough and brave enough to go for it.”

From Durham to Atlantic City: How SMT and PFL Pulled It Off 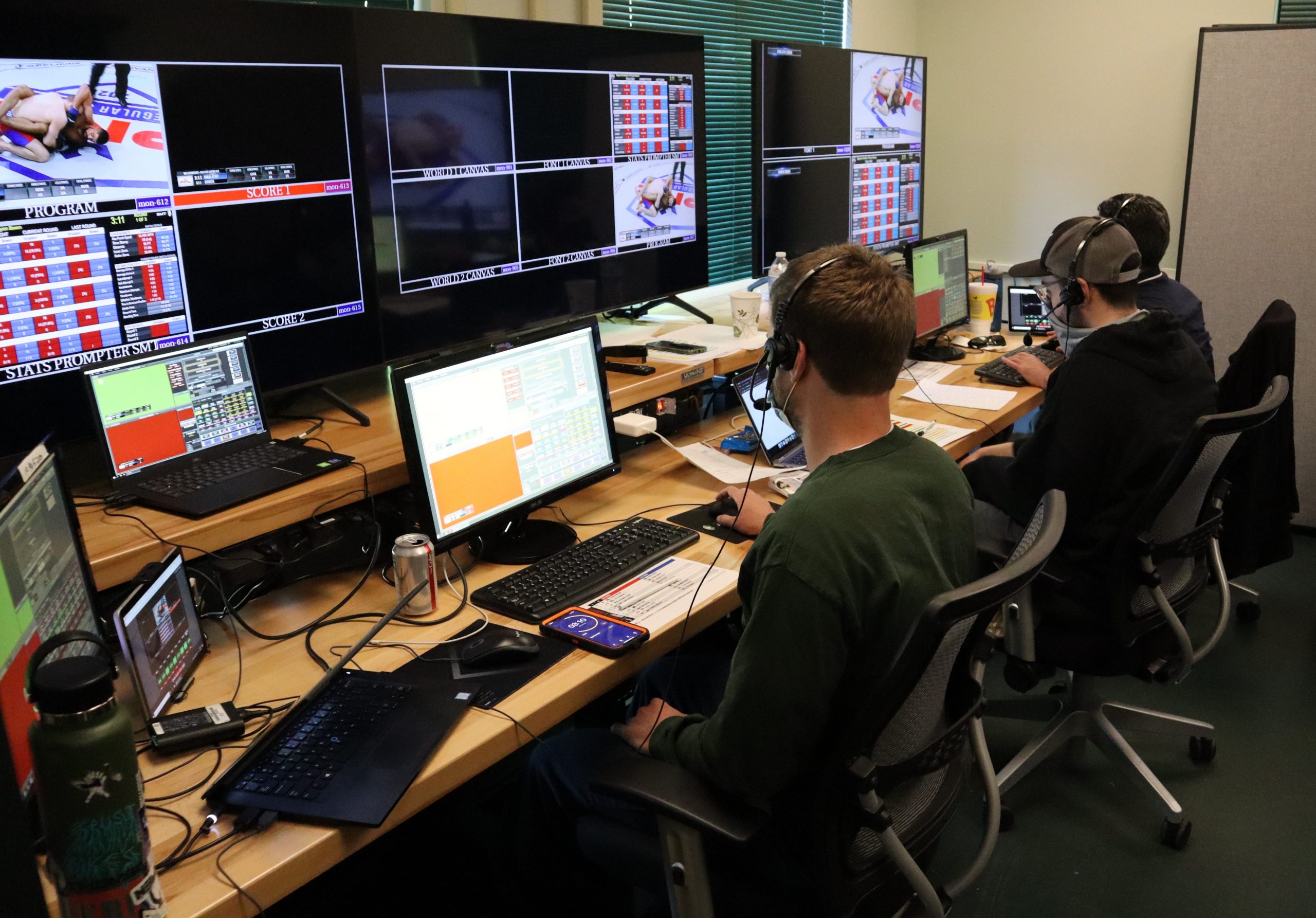 This season, due to COVID-related onsite restrictions, nearly all SMT personnel are located at its headquarters in Durham, NC, and its equipment is physically housed inside PFL’s bubble in Atlantic City. As part of its ROOSTER workflow, SMT is using a combination of proprietary and third-party technology to bring back the UI, video monitoring, and comms to Durham in order to operate those systems remotely.

In Durham, SMT has set up five pods to keep the 15 operators socially distanced at its facility, including the font graphics coordinator, graphics ops, and data inputters. SMT initially deployed four people in Atlantic City for the ultra-complex set up of PFL’s SmartCage but is now operating with just two crew members onsite (one in the truck, one cage-side).

“We’re doing almost everything remotely, including [calculating] strikes, strike speed, take-down attempts, submission attempts, kicks, power strikes, and all the traditional strike data,” says Louthan. “That is being collected and aggregated here in Durham through a video feed provided from Atlantic City. What may have been done in the past with a couple of people sitting cage-side watching the fight is now being done entirely in a remote environment.”

In addition to providing data-capture/processing services and the scorebug graphic, SMT worked closely with Big Block to design and integrate the graphics package for PFL.

“SMT made it one-stop shopping — not just from the technology perspective but for the creative side as well,” says Greenberg. “And I had so much confidence after seeing their work, I felt they could develop the necessary systems. And they came through with flying colors.”

SMT’s ROOSTER workflows allows the graphics coordinator and operators in Durham to communicate in real time with the production team at the front bench in Atlantic City 450 miles away.

“It was a very different workflow for us this year, but, honestly, if you hadn’t told that we were in a different state hundreds of miles away, I would have thought they were in the next truck over,” says Greenberg. “You just press the button, and it’s amazing how it feels like they’re right there.” 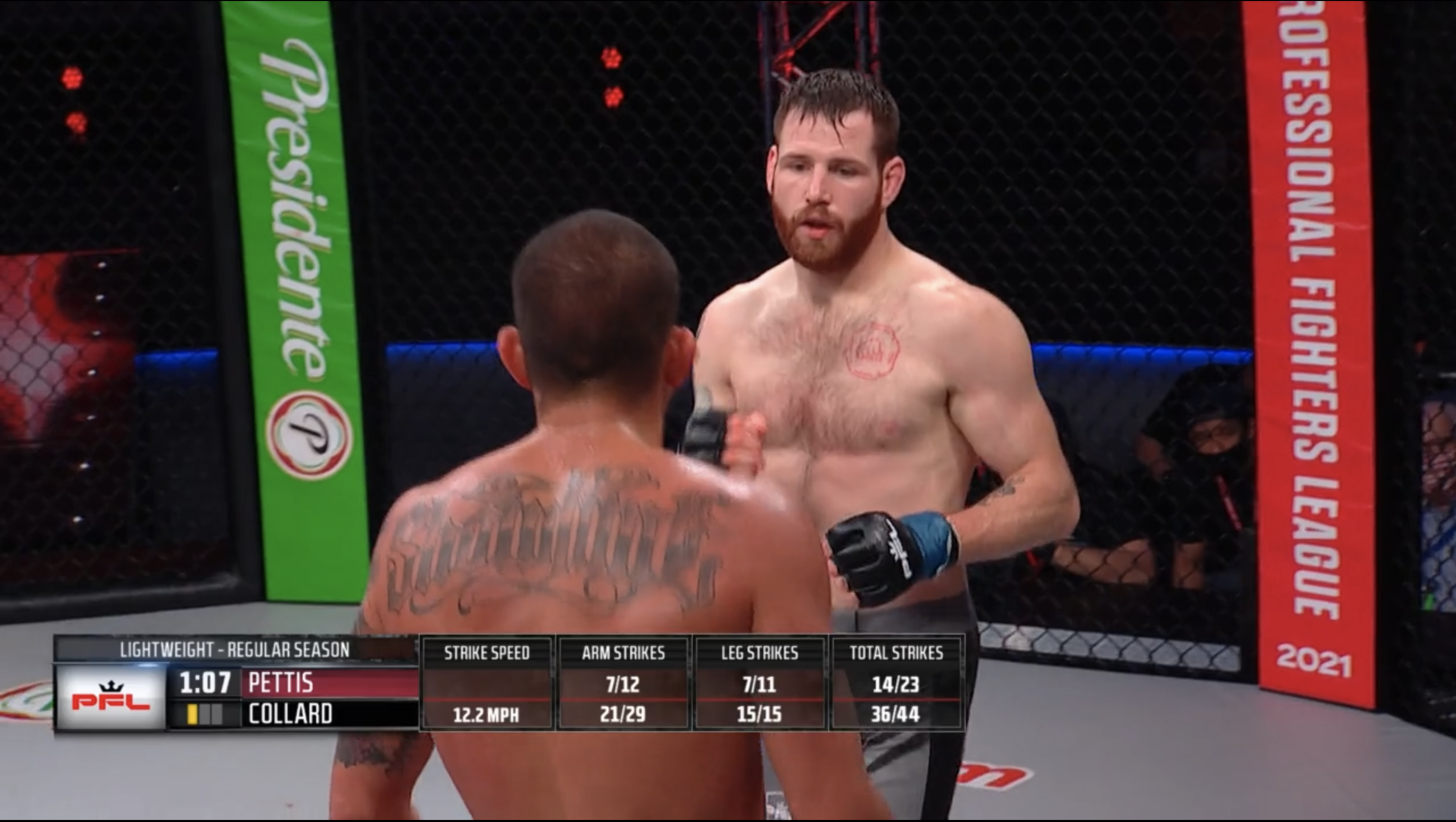 PFL’s scorebug showcases a host of fighter data provided by SMT throughout each fight.

SMT has built 16 ROOSTER production pods in Durham capable of scaling up or down to support any level of production. For the NHL, for example, SMT can support up to 14 simultaneous operations for the NHL’s player- and puck-tracking systems with three users in each pod. This allows SMT to handle out of Durham what was previously done in-venue while the hardware remains onsite at the venue.

“It’s really a workflow that’s quite unique and very scalable,” says Louthan. “We can scale it up to support just about anything.”

Moving forward, he believes, ROOSTER will allow SMT to operate systems remotely on a regular basis that would have previously required extensive personnel onsite.

“There are always going to be shows that require a physical onsite presence to some degree,” he says, “but, where we may have had needed two or three boots on the ground in the past, we now need only one in the venue to make sure everything gets set up and interconnected. And then the actual operation of it is completely handled remotely out of Durham.”

Louthan also believes that it will allow more-consistent and -reliable operators for SMT customers since the same operator will work shows regardless of what city the event is taking place in.

“That is great on the production side because they can start to form a cohesive bond with that production team,” he explains. “At this point, our main operator for PFL is calling for and selling graphics and has them ready for George well before he even calls for them because he has supported that show for two years and is in tune with what they want. It allows us not only to centrally locate resources but also to drive that production to a new level.” 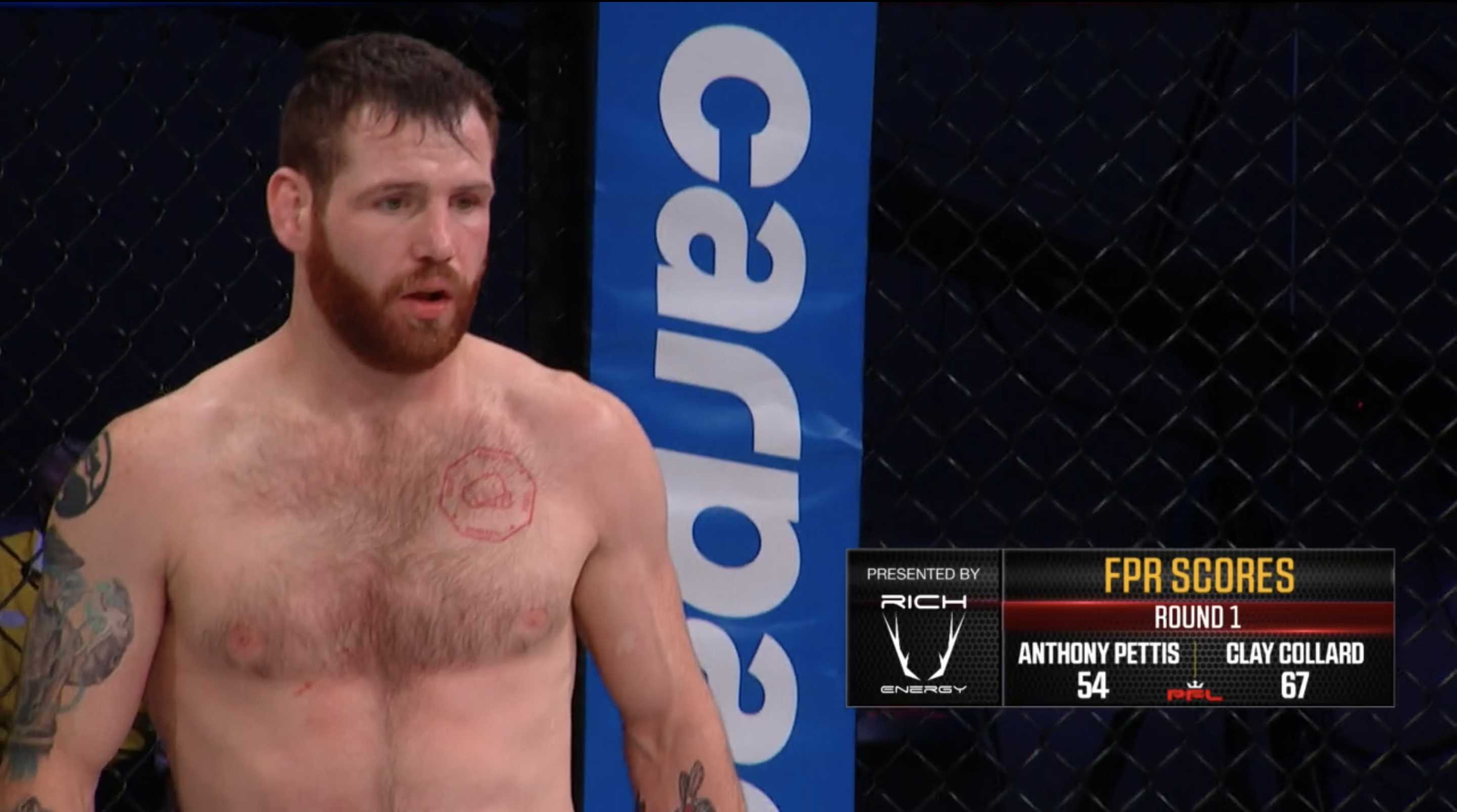 PFL and SMT teamed up to create the Fighter Performance Rating metric for the 2021 season.

Although SMT already provides a wealth of advanced analytics for PFL broadcasts, launch of the Fighter Performance Rating (FPR) this season marks a massive step forward in how data can tell the story inside the cage. The metric, which shows fans how rounds are won or lost based on weighted stats collected by ringside spotters, as well as new input mechanisms and capture devices installed by SMT.

These stats are relayed to SMT inputters at SMT’s Remote Production Studio at its Durham-based headquarters. At the end of each round, the resulting scores are integrated into on-air graphics, providing fans with analytical insight into the fighting styles and strategies of each fighter.

“They knew they wanted a unique metric that captured the essence of the fight,” says Louthan. “The discussion immediately centered on how all of these disparate data inputs could potentially be used to drive a single metric. We worked with the PFL team, the fighters, and the announce crew to refine that to a handful of data points and create a coefficient that could portray an accurate representation of the fight at any given moment. It’s just a great example of where the PFL is pushing technology to differentiate itself in a unique way.”

In addition to FPR, SMT and PFL are currently in beta-testing for a new kick-speed metric, a first in MMA coverage.

“We looked at actively attaching a sensor [to the foot] like we do in the gloves to measure punch speeds, but that was shot down pretty quickly,” says Louthan. “We even talked about putting unique paints on the feet to be able to track that way, but, with perspiration and limited access to the fighters, that gets challenging. So we went through all of this, and, ultimately, the only real solution that we could come up with that was going to be viable is a 100% purely optically tracked solution.”

SMT has placed an array of cameras around the cage to provide a vector-based tracking algorithm for kick speed. The algorithm starts with the placement of the foot before the fighter lifts it and then optically tracks it during the entire kick motion.

At least initially, the kick-speed metric will not be available live but instead used during replays and analysis. To jump to specific kicks in the action, SMT had to develop its own SPR (simultaneous playback record) device to capture all the video feeds, synchronize the video feeds, and simultaneously use them to calculate the kick speed.

“As a fight starts,” says Louthan, “when the first kick happens, we’ll start processing that kick. Then, internally on our side, we’re recording all of the kicks, and we’re going to go through and play catch-up. After the first kick occurs, we generate a kick speed; then we jump to the next kick and generate a kick speed; and, at the end of the round, we’ll spend a few minutes calculating. We do also have the ability for the production team to point out a single kick and ask for that speed. And we immediately jump to that kick and register that.”

He expects the kick-speed system to go live for the start of PFL playoffs in Week 7 of this season and hopes to have the system hitting its groove for the championship round.

“Like every great technology company,” says Greenberg, “SMT has to be four or five steps ahead of the rest of the business. And I have full confidence in them because they are tremendous at delivering on what they say they’re going to do.”