Between NBC, Golf Channel, and streaming platform Peacock, more than 25 hours of live coverage of the 2021 U.S. Women’s Open begin today from The Olympic Club in San Francisco.

This week’s event marks a bit of history on the production side. For the first time in the 75-year history of the event (56 of which have been televised), a woman will sit in the producer’s chair for the live television coverage. Beth Hutter, who currently serves as lead producer on all of Golf Channel’s LPGA events, will be at the front bench, and, for many of her on-air colleagues, it’s a deserved honor that has been a long time coming. 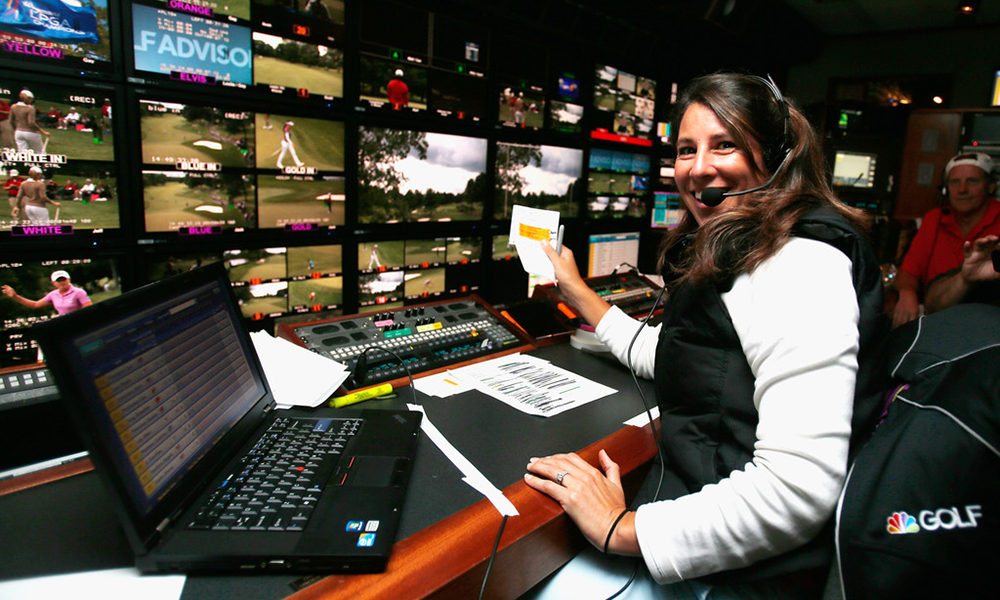 Beth Hutter becomes the first woman in the history of the U.S. Women’s Open to serve as lead producer of its television broadcast.

“Beth’s great,” says on-air analyst Paige Mackenzie. “She’s incredibly organized; she keeps it very fun, especially on weeks like this where it’s going to be a lot of long hours. She takes her job very seriously in making sure that the audience gets the [players’ stories] as well as highlighting the great golf. It’s obviously a big deal that she’s been given this responsibility and she works week-in, week-out on the LPGA Tour. It’s no surprise to us that know her. I don’t think for us it feels as big of a deal, because she deserves to be put in this position.”

On-course reporter and two-time U.S. Women’s Amateur champion Kay Cockerill adds, “I really admire her for her work ethic and her organization and just how she runs a telecast from top to bottom. And she does it in a very professional way. She gets the most out of those working for her; everyone wants to do their best for Beth. She’s very versed as a producer, and it’s about time that she does a U.S. Women’s Open. It’s hard to believe that this will be just her first one producing, because she’ll slip right into the chair, and it will be like she’s done a dozen of them.”

Hutter is no stranger to the biggest stages of women’s golf, having produced coverage of such high-profile events as the Solheim Cup, ANA Inspiration, the KMPG Women’s PGA Championship, and the Evian Championship. She’s also slated to oversee women’s golf at the Tokyo Olympics for NBC this summer.

In terms of this year’s event, she is most looking forward to the sheer number of hours that the crew will be on the air, she says, which allows NBC and Golf to showcase as many players as possible. That includes live featured groups all four days of the event (a morning group and an afternoon group) on Peacock, USGA.org, and the U.S. Women’s Open mobile app and via DirecTV. The digital components bring in an additional 30 hours of live coverage.

On the tech side, NBC will be deploying live drones for aerial views of the unique course that is The Olympic Club.

“I think they’re going to be awesome, showing a lot of the subtleties of the course,” says Hutter. “We’ll be able to see those a lot clearer.”

In addition, TopTracer graphics will be featured prominently throughout the live television broadcast.

“[TopTracer] is the thing that we’ve been seeing a lot more on our broadcasts, and I think, for the women players, it showcases their strength and accuracy, which is the best part of their games. I think what intrigues most people when they tune into the women’s game is how powerful they are and how straight they hit a ball. We watched Patty Tavatanakit when she won her first major, and the amount of fairways hit is really unbelievable. I think that tool on our broadcast is one of the neatest things to watch, and we’re going to have a lot of them out at the Olympic Club.”

Onsite studio programming will also support the weekend’s efforts. NBC Sports will surround the tournament with 13½ hours of live studio coverage with Golf Central Live From the U.S. Women’s Open on Golf Channel.