Nerd Street plans to safely return to live events this July following reduced COVID limitations, after a year of exponential growth through virtual operations during the pandemic. With support from game publishers, the first in-person events will kick off in July at the company’s Localhost venues across the country. 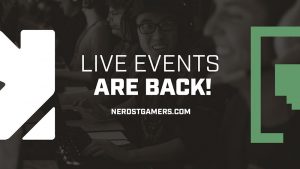 While smaller in-person events will begin in July, the first large-scale major tournament will be held this coming January 2022 at the Nerd Street Winter Championships at Localhost Los Angeles. Historically, Championships have included titles in VALORANT, Rocket League, Rainbow 6 Siege, League of Legends, and Apex Legends. Previous Championships have also featured over $60,000 in cash prize pots, and over 500 players participating across all titles.

“The return of live esports tournaments is critical for competitive integrity and growth of the industry,” says John Fazio, CEO of Nerd Street Gamers. “I think we’re all ready to get back together and see each other in person, so we’ll do what we do best and lead the charge on providing safe live gaming environments in our Localhost facilities while providing the highest quality event experience to our customers.”

Due to restrictions from the COVID-19 pandemic, Nerd Street moved to virtual models in 2020 with the announcement of online tournaments and summer camps. With COVID’s stay-at-home orders being the catalyst for many gamers joining the esports movement, Nerd Street saw a 218% increase in members during this time, and over 200K new followers on their Twitch channel to date. The company’s shift back to live events and tournaments will be the first time this growing fanbase will be able to come together in-person.

Despite the pandemic, Nerd Street also spent the last year continuing to grow the company’s brick-and-mortar presence at scale for the eventual reopening of the country’s live event sector. During this time, Nerd Street launched five new Localhost locations across the country from Philadelphia, PA to Bakersfield, CA.

“Many of our country’s youth didn’t have access at home to the high-quality technology that it takes to be successful in esports over the last year,” adds Fazio. “While it was encouraging that so many gamers joined us virtually during this time, we’re looking forward to reopening our Localhosts so that people of all ages, skill levels and socioeconomic backgrounds can have access to the opportunities and technology that we offer for competition first, and also for school and work.”