No Match for Covid: How All Elite Wrestling Kept Its Audio Production Moving During the Pandemic

For the past two years, I’ve had the good fortune of working as the front-of-house (FOH) engineer for All Elite Wrestling (AEW) LLC, an American professional wrestling organization that broadcasts live every Wednesday evening on the TNT Network. But my luck doesn’t end there: we are one of the few sports organizations that did not halt production during Covid. And for that we are incredibly grateful. 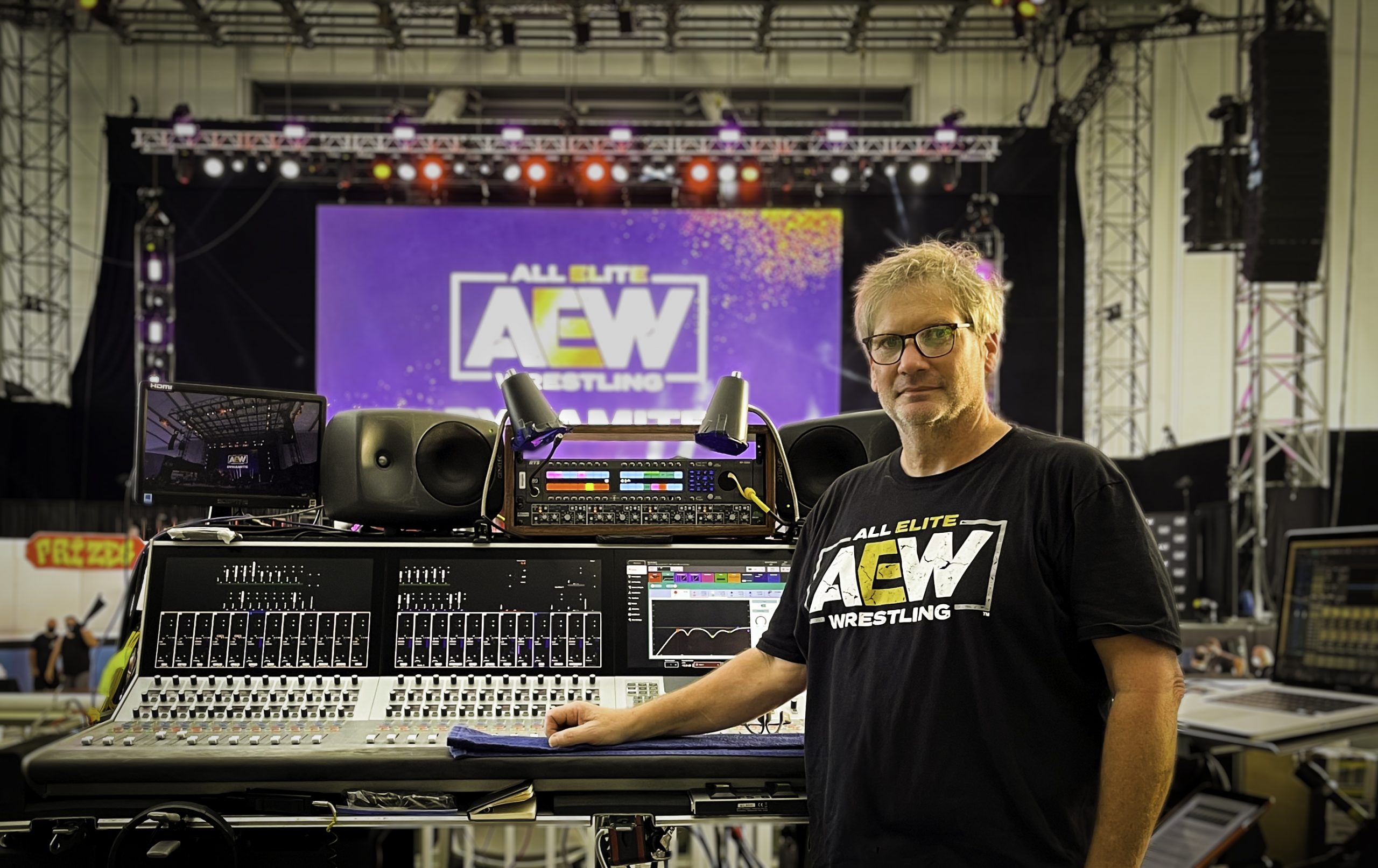 Stepping back, I’ve been doing live audio since the mid-80s, mixing FOH and monitors for bands around the southeastern part of the US. While working the music scene for many years in Florida, I landed a job as an FOH mixer at Universal Studios for a wrestling show. That’s really when broadcast audio hit me and I thought, why aren’t I doing this more often? What was supposed to be a six-week gig evolved into a 14-year career mixing audio for wrestling matches.

From there, I was offered a job in 2019 with AEW as its FOH mixer and since then, we haven’t shut down production because of Covid. Though things have certainly been very different. In the beginning, we would travel to different cities every week to go live every Wednesday night, and everything had to be streamlined with as few moving parts as possible. We did that from October 2019 to March 2020 when Covid hit. Since then, we’ve been filming in Daily’s Place, an amphitheater in Jacksonville, FL.

As the front-of-house Engineer, I’m in charge of the audio in the arena. Lyon Video, our main OB service partner for the show, encouraged us to use the Calrec consoles, and I’m so glad they did because the Summa’s workflow is so easy to use; I have a good number of outs and all the routing I need, and the audio sounds great. I also use a Waves server to add FX into the chain for things like reverb, delay, and compression.

I had experience working with Calrec desks before this; I started out with a Sigma with Bluefin because that’s what most of the trucks had at the time. Then when HD emerged, most of the trucks upgraded to Calrec’s Artemis and Apollo consoles. Admittedly, I’d never seen or knew of a FOH sound mixer using a Calrec desk.

Prior to Covid, when we were traveling as per usual, our setup was such that Lyon’s main OB truck had a Calrec Apollo console and they also had two 44-channel Summa consoles, one for FOH. With Lyon we began mapping out how the crew would get the signal to the venues and route it to three consoles at the same time. Then we started talking about networks; how many we would need and how they would run. This is where Calrec’s Hydra2 networking solution really came into its own.

In more detail, our setup involves the use of fiber from Lyon’s broadcast truck to three Hydra2 racks in the venue, along with fiber going to another broadcast truck for sub-mixing. We use a 32×24 Hydra2 configuration for each location, a 24×24 at the announcer position, and a 24×16 at the front of house. We also have a 24×16 that we use for remote locations. We use fiber to connect to the Hydra2 boxes for control. We have an announcer booth, a ring with 14 microphones around it, plus there is pyro, smoke and flames that we mic; even though we don’t have an audience right now because of Covid, we still put out audience mics.

Once travel was halted because of Covid, the staff needed to iron out our plans to produce the show in one place, which is when we started using Daily’s Place. We used the same setup as we did when we were travelling to different venues pre Covid.

All of our staff and crew are tested for Covid-19 the first day before they enter Daily’s Place, and their temperature is taken every day they’re on site. We also wear masks around the clock and practice social distancing measures. We’re so fortunate that we haven’t had to shut down like so many other live events, and this largely because of the amazing staff and crew that we have. Every one of them plays a major role in the execution of the show, not to mention that I get to use some of the best audio consoles in the business. Everything about them is great — from routing, patching, networking and their overall sound. This, of course, makes my job incredibly enjoyable.

This article was submitted on behalf of Calrec Audio.