The young company taps a deep well of sports-industry experience

AR company Quintar may be new, but its executive team has strong roots in the sports industry, with stints at companies like Sportvision, Magic Leap, Intel, and Turner Sports. And, given all that experience, the team is confident that the start-up can make a difference in the AR space. 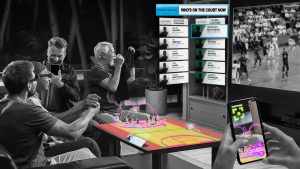 Quintar is looking to broaden the reach of AR with its Q.Reality platform.

“After Intel,” says Jonas, “Jay and I realized it was time for something new again. We looked at the ecosystem, and it was just eerie how similar AR is now to where VR was about five years ago. Everybody is talking about it, and there is huge potential, but, when you look around, nobody’s doing anything compelling.”

Many AR companies have focused on creating an app that brings users into a controlled environment. Quintar is approaching it from an inside-out approach, with its SDK designed to reside inside the client’s app rather than outside it. The Q.reality platform SDK can be integrated into iOS or Android apps or into an exclusive app built around an event.

“Our platform is an SDK,” says Jonas. “We don’t want to be an app builder. We want our SDK to go into the client’s app and make it more robust. And our platform has almost no latency and delay, with AR available in less than a hundred milliseconds when it gets the data API.”

There are two versions of the platform. Q.Reality Home provides a tabletop AR live and replay experience that complements the live-TV–viewing experience with meaningful game-data visualization. Q.Reality Venue gives fans in the stands control over AR data visualization that formerly was available only to those watching at home. The two experiences are in sync.

The Quintar development process for a client begins with a few hours spent capturing images in the venue to build the 3D space.

“On game day,” says Jayaram, “the venue or team app would use our platform to integrate the AR experience into their app. Our platform integrates all the data from different sources, synchronizes it, and then keeps track of it within the 3D space.”

That 3D space can also be tied into the rest of the venue so that features like wayfinding and even AR scavenger hunts can be enabled. “There’s a myriad of things that we can do once we’re in there,” notes Jayaram.

AR seems like a natural fit for sports applications both in venue and at home. In the venue, fans typically are separated from the kind of data that makes being at home compelling. And fans at home are beholden to the data sets that the broadcaster or OTT provider provides them. AR can expand the data universe for both audiences.

“You also don’t need to get into a headset experience in order to consume it,” Jonas points out, adding, “There are some major hitters like Apple, Microsoft, and Google getting involved.”

Another important factor is that AR is a second-screen experience to the linear signal, instead of one that cannibalizes viewers. Jonas notes that linear rights sustain everything in sport and that AR enhances those rights.

“What we’re doing,” he says, “is enabling people to personalize data using AR. A producer on a broadcast is using just tiny bits of that data. But, with AR and our platform, [the producer] can decide what data [they] want different audiences to see. It’s a cool way to personalize the data and make it more usable to the consumer.”

Jonas notes that a differentiator is that Quintar approaches AR development and deals as sport-specific rather than league-specific, giving the platform a much wider landing zone. Venues, teams, leagues, regional networks, national networks — it’s all in play.

Jonas also sees it as a stepping-stone to sports betting: “AR is the perfect medium for sports betting because it’s interactive and you can do something unique to engage the fan during the event. We’re getting a lot of interest in that.”

Other opportunities for integration include ecommerce, games, and NFT marketplaces.

“The ultimate test,” says Jonas, “will be if we can create something that is functional, has utility, and is something people want to use over and over again. We’ve been at this for a long time, which is unique for a start-up.”