Ross Video has been chosen by Red Bull Media House as their technology partner for the new ServusTV building project in Salzburg, Austria. Two years and one global pandemic after the original announcement, ServusTV is back on air with the latest tools to improve workflow efficiency. 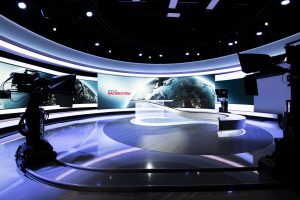 “Servus TV is the number one private broadcaster in the Austrian market,” comments Philipp Stoegner, Service Director. “We wanted to build a new flagship facility for ServusTV that that would allow us to do outstanding productions and design cutting-edge and future-proof workflows. This was a real opportunity for us to challenge the various manufacturers and vendors in live news production and say ‘show us your best’. Having gone through that process, Ross came off as the clear winner which resulted in the significant Ross installation we see today.”

From the first meeting with Ross at the IBC Expo in Amsterdam in 2018 to the opening of the new facility in 2020, it’s been quite the journey. “When we first met Ross, we were primarily looking at updating our newsroom computer system,” Stoegner notes. “We looked at Inception – the only web-based newsroom solution at the time – and we were very impressed. As the scope of the project grew, so our discussions with Ross intensified, and I was consistently impressed by the openness of the Ross team. They were certainly prepared to make suggestions and share their experiences, but they really listened to us and were very open to discussing product roadmaps and our feature requirements. That’s the kind of partnership we need in order to be successful.”

With commissioning completed in less than three weeks, the team at ServusTV is now firing on all cylinders and even looking to expand their content in new directions. “When I explain how we’ve worked together with Ross and how we handled the commissioning and training in such a short time period, people are shocked in a good way. I’m delighted with how the project has been delivered and our audience numbers have consistently grown every month since going on air – that’s the best measure of success I could ask for.”