The effort NBC Olympics has put into the various studios over the years is hard to miss. Homey indoor locations and lively and stunning outside locations are just a couple of the consistent themes one sees while tuning in. 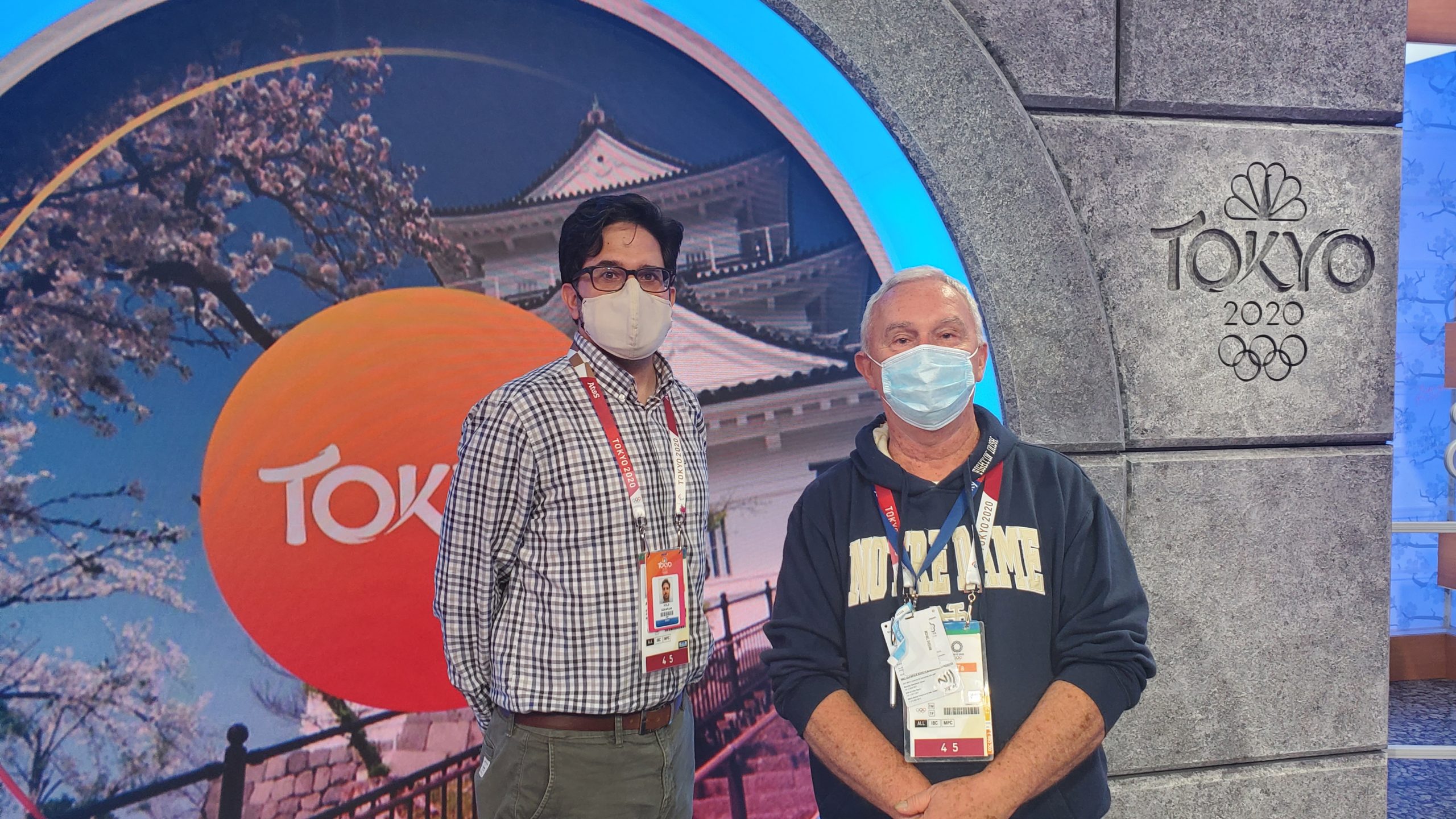 The Tokyo Olympics is no exception as this year Mike Sheehan, NBC Olympics coordinating director, Atila Ozkaplan, VP, production operations, Olympics, have worked closely with the internal team as well as external partners to create sets that span from Tokyo Bay to Stamford and Miami.

Explains Sheehan: “Four years ago when we started this journey to represent Tokyo on television, we knew that we wanted to do something different and we didn’t want to be in a hermetically sealed environment. And we thought, let’s look for an outdoor set and we looked at a couple of different locations that fell apart and didn’t work.”

What did work was someone from the team was staying at the Hilton Tokyo Odaiba and visited the gym on the fifth floor. Ozkaplan then went into action, working with Lillian Cereghino, the Operational lead for the outside studio location, the site owner, scenic partners and structural engineers to figure out weight loads, support systems, and structural parameters for the fifth-floor location. 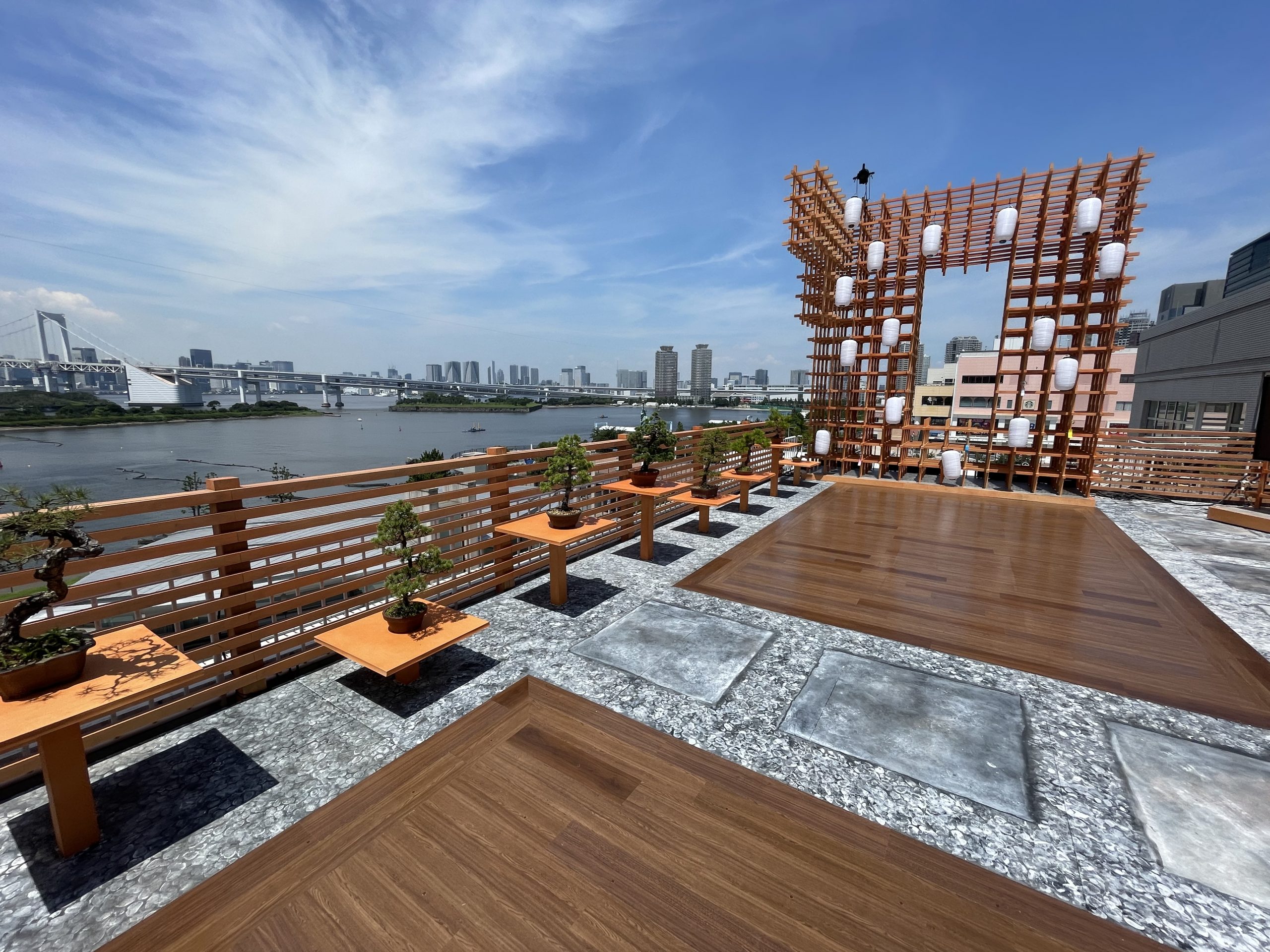 The NBC Olympics main outdoor set for the 2020 Games has a dramatic backdrop.

“It’s helped that we have all functioned within the Olympics model as a group for so long,” says Ozkaplan. “It’s been the same group since Sochi and for some even longer.”

The centerpiece this year is the Olympics primetime set located on the fifth floor of the Hilton Tokyo Odaiba. Fabrication took place in the U.S. and then it was broken down and shipped to Tokyo where it was reassembled earlier this month.

“The only way to load it on to the fifth floor was with a crane in the overnight hours,” says Ozkaplan. “Black Walnut worked in the rain for a solid week or 10 days, and they were really great.”

The use of AR elements, with the help of Ross Video graphics and a Stype camera, also have been a game changer, allowing the team to give new dynamic looks without needing physical pieces.

“It integrates with the set design and adds a beautiful element that doesn’t interfere with the natural backdrop and adds to the stories host Mike Tirico and others go through during the day,” adds Ozkaplan.

“We didn’t want them to be a 50-foot giant overlooking Mike on the set,” explains Sheehan. “We want to take advantage of some of the geometry and some of the angles on the set to be able to pin different graphic elements into right angles and around the front part with the woodwork that we have. We can have front elements that go across and compliment the angles, not necessarily fight against them.”

As for designing the Tokyo Bay set, Higgason is happy with the results.

Bryan Higgason, owner and principal designer at HD Studio and HD Studio Designers Paul Benson, and Sid Wichienkuer, looked to create a set that “gets out of the way” of a dramatic backdrop.

“The function of the studio works really well and I’m really happy with how it looks on air,” says Higgason. “It was similar to an outdoor set we did in Rio that had Sugarloaf Mountain in the background and at times like that you just get out of the way. You want to provide accents scenically that helps frame the viewer without taking away the star of the shot which is the backdrop.”

A virtual set is also in the mix this year as Telemundo in Miami has a virtual set that is designed to look identical to studio A at the IBC in Tokyo. HD Studio worked closely with Telemundo on the World Cup and Higgason helped them interpret his design of studio A, gave them dimensions, and ultimately the files that were used to design a graphical representation of studio A in Cinema that was then transferred into the Unreal graphics engine. That engine powers the virtual studio.

“It’s a mimic of what we have here in studio A, and it looks great,” says Ozkaplan.

“It’s spectacular,” says Sheehan. “[Telemundo VP, Sports Content] Robert Pardo called me one day and just said, ‘Hey, what would you think?’ and we worked together on the whole thing to figure it out. Robert worked with their team, and it turned out beautiful. The irritating thing is some of the things that we had to cut out of our studio they were able to keep it because they had the advantage of a being virtual.”

Sheehan says the communication and honesty between all involved has been a difference maker when it comes to solid set designs.

“We can be very honest with each other about what works and what doesn’t and where the possible trouble comes are,” he says. “We work under very tight restrictions of time on stuff and o we don’t have a lot of time. We get over the romancing very quickly and jump right in.”