Ratings Round: NBC’s Olympics TV Ratings Down While Digital Viewership Skyrockets; NBA Finals Up Over 2020, But Down From 2019

Ratings roundup is a rundown of recent rating news and is derived from press releases and reports around the industry. In this week’s edition, NBC Sports’ coverage of the Tokyo Olympics are seeing lower TV ratings but huge streaming numbers, the NBA Finals were up over 2020 but down from 2019, ESPN’s X Games saw big viewership increases, NBC’s Open Championship was up 8% over 2019, Fox notched its highest rated MLB All-Star Game since 2018 and ESPN had its best Home Run Derby since 2017, NBC’s last NHL Stanley Cup Finals ratings were down, and more. 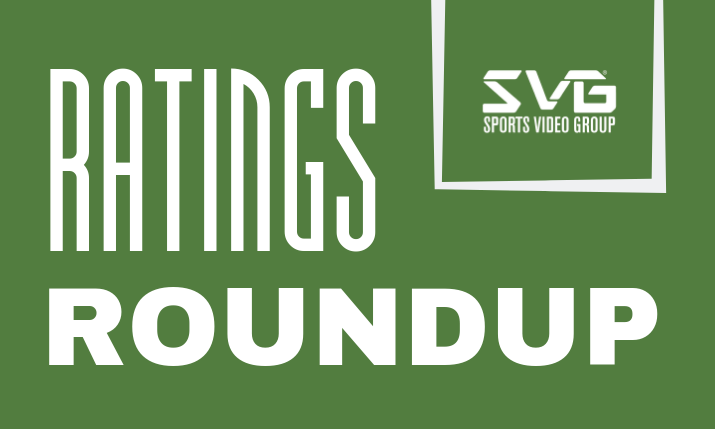 As of Wednesday, NBC Olympics’ primetime coverage averaging a Total Audience Delivery of 17.5 million viewers through Tuesday night — pacing to rank with NBC’s Sunday Night Football as the two most-watched primetime shows in 2020-21. Tuesday night’s primetime show, which featured swimming, women’s gymnastics, and indoor volleyball, averaged a Total Audience Delivery (TAD) of 16.2 million viewers, based on official live plus same day data provided by Nielsen and digital metrics from Adobe Analytics. With 15.7 million TV viewers, it marks the first time since the 2018 PyeongChang Olympics on NBC that any network delivered an average viewership of at least 15 million on four consecutive nights. In addition,Tuesday’s  Tokyo Olympics viewership more than tripled the combined primetime viewership of ABC, CBS and FOX (4.3 million) and marks the most-watched Tuesday night since the Presidential Debate on Sept. 29, 2020 (17.9 million on Fox News). (NBC Sports Group Press Box)

Sunday night’s primetime show, which featured swimming, women’s gymnastics, women’s beach volleyball and triathlon, averaged a Total Audience Delivery (TAD) of approximately 19.8 million viewers – a sizable increase over Saturday night’s primetime coverage (15.3 million), which was up over Friday night’s primetime Opening Ceremony show. The 61% growth from Friday through Sunday is the largest increase ever in the first three nights of a Summer Olympics. Sunday night’s TV-only audience of approximately 19.2 million viewers tripled the combined viewership for the other broadcast networks and marks the largest viewership for any primetime show since Super Bowl Sunday. (NBC Sports Group Press Box)

The 2021 NBA Finals presented by YouTube TV on ABC concluded on Tuesday, July 20 when the Milwaukee Bucks defeated the Phoenix Suns to win the franchise’s first NBA Championship in 50 years. Viewership of the 2021 NBA Finals on ABC was up 32 percent from last year’s NBA Finals, according to Nielsen. The six -game series averaged 9,911,000 viewers. Tuesday’s title clinching Game 6 broadcast was up 50 percent and was the most-watched game of the series. The broadcast averaged 12,517,000 viewers, peaking with 16,536,000 viewers from 11:30– 11:45 p.m. ET. Game 6 delivered the largest audience on television in the key demographic of People 18-34 since February 2021 and propelled ABC to win the night across all of television and in all key demos, including the Adult and Male demos. The game set 25-year ratings records in the Milwaukee (41.5 rating) and Phoenix (25.9 rating) markets. (ESPN Press Room)

Although NBA Finals viewing was up from a year ago, it was down from 2019 – registering the fourth-least-watched NBA Finals ever. The six-game series was down 35% from 2019, which averaged a 15.1 million. Overall, the NBA Playoffs — on ESPN, TNT and ABC — were up 35% over 2020 to 4.25 million Nielsen-measured viewers. (MediaPost)

In the first summer edition of X Games since 2019, X Games 2021 content across ESPN, ESPN2 and ABC experienced double-digit viewership increases on television and triple-digit growth on @XGames social and digital media platforms. X Games 2021 telecasts experienced a viewership increase of 13% versus X Games Minneapolis in 2019. Among adults in the key 18-49 demographic, this year’s event saw a 5% increase, and in the 18-24 demographic, X Games 2021 viewership increased 34% over all four telecasts and 47% over the two ABC telecasts versus 2019. Similar to X Games Aspen 2021, gains this summer were driven by viewers watching more minutes overall – up 5%  compared to X Games Minneapolis 2019. On the social media front, X Games 2021 delivered more than 105 million video views – a 439% increase from X Games Minneapolis 2019 – and 326 million impressions across TikTok, Instagram, YouTube, Facebook, Twitter and Snapchat, which drove an increase of 318% versus 2019. (ESPN Press Room) 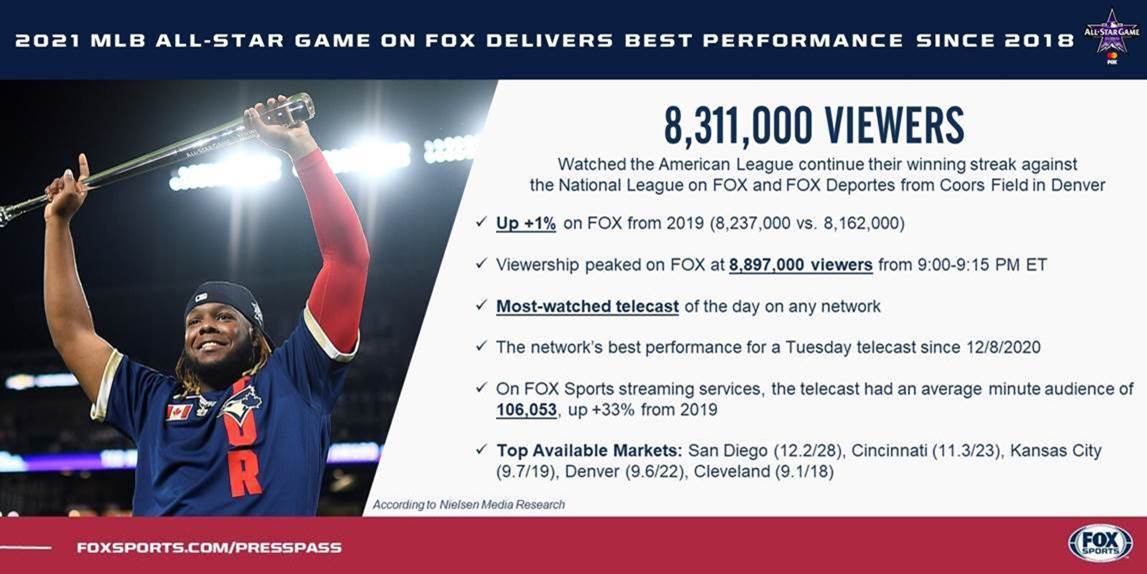 NBC Sports averaged 2.52 million viewers for the five-game Lighting-Canadiens Stanley Cup Final in its final season with NHL rights. Excluding the six-game Lightning-Stars series in September ’20 (delayed due to COVID), this year is the least-watched Stanley Cup Final since Ducks-Senators in ’07 (1.76 million). Nielsen does not measure Canadian markets, meaning no figures from the Montreal markets are factored in for NBC this year. Two years ago, NBC Sports averaged 5.5 million for a seven-game Blues-Bruins series. (SportsBusiness Journal)

PPV buys for for UFC 264 headlined by Dustin Poirier’s TKO victory over an injured Conor McGregor, came in just under 1.8 million globally. That rails the record of 2.4 million buys for UFC 229 in late ’18, which was headlined by Khabib Nurmagomedov defeating McGregor. According to SBJ, 500,000 of those buys came from international, which means ESPN+ logged around 1.3 million buys. (SportsBusiness Journal)

UEFA EURO 2020 Final on ESPN is the Most-Viewed Euro Match Ever in the U.S.

The UEFA EURO 2020 Final on ESPN  set a record as the most-watched European Football Championship match ever in the United States with an average audience of 6,488,000 viewers. The audience for the Final increased 43% over the 2016 Final and surpassed the previous viewership high of 4,567,000 for the EURO 2012 Final (Spain vs. Italy). The EURO Final is also the most-viewed soccer telecast in the United States since July 2019. Sunday’s audience peaked during the penalty shootout with 8,199,000 viewers. Through all 51 matches of UEFA EURO 2020, ABC, ESPN and ESPN2 delivered an average audience of 1,363,000 viewers, a 31 percent increase over the 2016 event on ESPN and ESPN2 (1,039,000 viewers). (ESPN Press Room)