University of North Carolina: Sounding Great Across the World of College Sports and Beyond 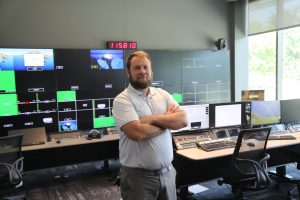 Across the campus there are 28 sports played in 13 venues, covered by three control rooms, two studios and associated office space. From this facility, UNC produces between 160-200 broadcasts a year. During the pandemic, UNC was asked to produce additional events for linear TV coverage, which saw a significant increase in output.

UNC is part of the Atlantic Coast Conference, with the ESPN-owned ACC Network and ACC Network Extra (the ACC Network streaming service) covering a huge variety of sports, including football and basketball. UNC also works with ESPN2, ESPNU and all other ESPN platforms. They have also worked for other organizations, including providing coverage of the International Field Hockey Pro League to 40 countries. It also slices and dices content for on-demand access and social media.

Prior to 2019, UNC was operating a network consisting of a “hodge podge of devices”, as Ken Cleary, Associate Athletic Director, says. He adds, “We were a little all over the place and there wasn’t enough flexibility to operate a multi-control room/multi-venue environment.”

UNC spent two years exploring the market to create a new facility and turned to Calrec for key parts of the audio infrastructure. It installed two Summa consoles, a Brio 12 and the IP-based Type R for TV. For Type R control, they are using a range of fader panels and flexible Type R soft panels, which can be configured to provide a variety of functions.

Prior to 2019, they used Dante to connect all stageboxes at the venue via a Dante card in the audio console, but now UNC operates three audio protocols simultaneously: IP, Dante and Calrec’s Hydra2.

This gives UNC the flexibility to handle multiple I/O types depending on the requirements of each sport and venue. Caleb Furrow, Broadcast Engineer, explains, “While we have fiber running to each venue, we don’t have unlimited fiber to each venue. In those scenarios, having the ability to throw down a network switch and use either Dante or IP helps us bridge some of those gaps where we may not have enough direct fiber runs. This allows us to have virtually unlimited I/O over IP or Dante at a venue over only two fiber runs. An IP solution like this takes a little more time and space at a venue for our on-site Engineer, however. This is why in the event that we only need a few analog inputs (perhaps just two-four field mics at a smaller scale production), we can utilize a Calrec field box using Hydra2 without the need for rolling out a larger and slightly more involved IP solution.”

The two Summa consoles both sit in audio booths in the two bigger control rooms, which do the job of an OB truck. UNC also has a smaller, eight-seat control room that handles a lot of studio productions and some smaller shows, and that’s where the small footprint, high-power Brio sits.

Meanwhile, the Type-R for TV is in the podcast/radio studio. The Type R is interfaced through a control room using IP Gateway technology from Calrec so they can handle switched Hydra2, Dante and IP feeds effortlessly. There are also cameras in this room to capture video. Furrow says, “The idea is that we can pull any source from any venue, whether it’s Hydra2, Dante or IP, and we can bring that feed into any of the consoles; this flexibility is very advantageous. When we first installed the Type R it was a little tricky to bridge the gap between that IP network and wider connectivity, and we resolved that with a Calrec IP Gateway.”

For example, if UNC want to pull in a radio/podcast feed from the Type R studio into a TV feed, with this flexible workflow they can just grab it whenever they want. The fact that they’re able to incorporate Hydra2, IP, and Dante all into one console “gives us a lot more confidence that what we get what we need on game day,” says Furrow.

“Prior to Covid, we never produced football, but because of Covid and the restrictions on travel ESPN asked us to this year. This required us to do a lot of things we hadn’t done before, such as sending audio at field level back to our consoles in the control room. We worked with Calrec on a solution to do this entirely on our IP network but in the meantime I pulled out a Dante four I/O rack from the basketball arena and took it over to the football. We simply changed the transport protocol, but for our Audio Engineer on game day, there was no difference.”

Furrow explains that they have looked at adopting a wider IP solution but at the moment are very happy with the flexibility of their existing setup. As Cleary says, “We always know it’s possible to figure out how to get an audio signal from the venue to the console. That’s the most important part of this for me.”

There’s another key factor in the decision to install Calrec technology, as Cleary adds, “Part of the decision-making process for us on the Calrec side was we’re trying to build a very robust student program here, bringing in our students on campus to learn television production. There were other ways we could have done this but none are as elegant or robust as the Calrec solution. The primary driver was how do we make all of this work together and Calrec offered the best solution.

“But a secondary aspect of the decision-making process was that we want to teach students how things work in the real world. If they’re going to work in a broadcast facility for a major network or in a TV truck, we want them to see the same equipment that they’d see in those environments. Although we could probably make a smaller console work for a lot of what we do it’s not necessarily training students how the real world operates. That was a major driving factor for us.”

The UNC is a prime example of the power and flexibility that Calrec provides, especially in this complex, multi-protocol world.