David Dinkins, Jr., Showtime Productions, SVP and executive producer and the rest of the Showtime PPV production team are on site at Rocket Mortgage Fieldhouse in Cleveland this weekend for Sunday’s eight-round cruiserweight PPV fight between Jake Paul and Tyron Woodley. And Dinkins sees the event, due to the unique fighters involved, as a watershed moment. 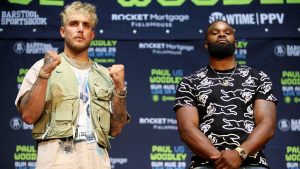 Jake Paul (left) and Tyron Woodley will fight on PPV on Sunday.

“If we can ignite some interest with their larger fan bases people will look back and say, ‘this is when that happened,’” says Dinkins.

Dinkins says the fight continues a trend in boxing where celebrities turn professional fighters, a move that brings new fan bases to the sport.

“Paul is a huge social media star with millions of followers while Woodley is a highly decorated former UFC champion,” he says. “They are both trying a new chapter in their respective careers in the boxing ring. It’s a different kind of professional boxing and a wider fan base.”

As been the case in recent Showtime PPV events, expect an entrance that will wow viewers.

“We’re investing more time and resources in the theatrical entertainment portion of the entrances,” he says. “Over the years we’ve done all kinds of things like having a circus act for Floyd Mayweather and elaborate pyrotechnics for MMA. And we’re planning a very elaborate entrance for all the fighters, especially those fighting in the main event.”

Helping with the coverage of the entrance will be additional robotic camera systems that are strategically placed to unveil the fighters as they come through the entranceway, down the ramp, and into the arena.

“The funny thing about technology is it’s the artist, not the paintbrush and our camera crew and Bob Dunphy, our director, really separates us apart,” says Dinkins. “We pride ourselves on our fight coverage and capturing those moments and the anticipation that comes with the arrival to the ring.”

The production team will call NEP’s NCP XIV A and B units home for the show, with a GVG Kayenne production switcher, Calrec Artemis Beam digital audio console, Sony cameras, and Canon lenses playing a big part in the production.

“We have super slo-mo cameras that are covering the corners and robotics for the neutral corner and then three cameras overhead, so we have every angle of the ring covered,” says Dinkins.

With respect to COVID-19 protocols all staff are either vaccinated or tested and a negative test is required to work on the show.

“Masks are required, and the broadcasters will mask up when they aren’t on camera,” says Dinkins. “COVID-19 continues to be quite a challenge as its different from place to place and even promoter to promoter. So, each time we have to readdress who is going to do pre-testing and testing on site and that’s not a minor detail.”

The biggest logistical challenge this weekend is that a concert is being held on Friday night, two days ahead of the fight.

“It will be an ambitious Saturday to get things done and to check lighting and camera blocking of the entrances,” says Dinkins. “We also have a Bet Desk segment from Barstool Sports and that will be separate from the announce team desk.”