College Esports International (CESI) and the Sacramento Kings Guard Gaming launched the first ever high-scale Collegiate Esports Competition in Sacramento from August 18 to 20, 2021. The early rounds of the competition took place at the FireUp Esports Lounge in Roseville, while the semi-finals and finals were played at the world’s most technologically advanced arena, Golden1 Center in downtown Sacramento. 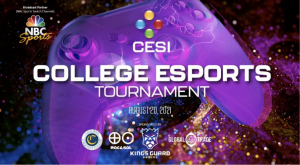 “Monkey Bubble is excited to continue pushing the envelope in esports production, experience, and education,” says Monkey Bubble Managing Director, Chris ‘Boop’ Lessard. “We want participants to have an experience they can take home and remember forever. Gaming and esports is the future, Monkey Bubble (and our partners like CESI) are proud to help usher in this amazing new era in entertainment and education.”

Numerous west coast universities and community colleges participated in the competition as well as the educational webinar put on in partnership with the California Community Colleges, Global Trade Sector. Guest speakers spanning across the globe from esports, tech, and entertainment industries were featured and interacted with students. Elite university teams competed in the tournament designed to test their skills through the popular Rocket League game. In addition, the participants had the opportunity to interact with members of the Kings Guard Gaming team, the NBA 2K League affiliate of the Sacramento Kings. Online post-event coverage of the event is being made available via the Cal State Esports, Fuel Network (FireUp) and NBC Sports Twitch channels.

“Esports belongs in higher education. Period,” says California State University Esports Collective Founder, and event host, Donna “BasicTaq” Walters. “These programs bring excitement to campus and increased student engagement while simultaneously preparing college students for successful careers using hands on learning opportunities reinforced by their coursework. Through college esports, I’ve seen first generation and underrepresented students gain the support and confidence needed to not only participate in campus activities but step up and lead teams of other students. Universities that back campus gaming communities are not only providing fun and engaging learning opportunities, but they are also providing equitable access to technology, encouraging diversity, and promoting inclusion while shifting the narrative of cyber bullying to positive online environments.”

CESI partnered with fellow Themed Entertainment Association partner, Monkey Bubble, to help produce the impressive pro-quality stream of the event during the Finals at the Golden1 Center, using LAN and team remote accessing PCs at the event, but distributed across North America, Europe, and Australia; something that has never been done before!

“We are thrilled to partner with College Esports International to help host the inaugural Collegiate Esports Competition,” says Sacramento Kings President of Business Operations John Rinehart. “Esports provides an engaging opportunity for young and eager gamers and Kings Guard Gaming players are the perfect mentors, proof that success and a career in the field is possible.”

“Esports is quickly emerging as a gateway to interesting and exciting career pathways for students, and we are excited to create this platform for engagement and learning,” says CESI Tournament Planning Committee Chair Gordon Hinkle. “Online esports and gaming have been an effective way for students to stay connected during the recent COVID-19 pandemic, and we want to encourage them to use that passion for gaming to consider exciting career opportunities in esports. Integration of digital arts, media and marketing are essential components of the industry, not to mention global avenues in entertainment, computer design, hospitality, event planning, emerging technologies, and more.”

Several of the Sacramento region’s business leaders and organizations have shown their support, including the Greater Sacramento Economic Council.

“CESI and the Sacramento Kings Guard have proven to be leaders in developing this high-quality esports competition for the Greater Sacramento region,” says Barry Broome, President/CEO of the Greater Sacramento Economic Council. “Our council recognizes the value this type of activity is playing on a global scale and the benefits of introducing students to exciting career pathways in esports industries. We wish this exciting tournament much success and are excited our city can play host.”

The CESI tournament comes on the heels of the Esportspreneur Expo; a free to the public, 5-day virtual speaker series held May 3rd through the 7th, also hosted by Donna “BasicTaq” Walters, and supported by Sacramento State University’s Carlsen Center for Innovation & Entrepreneurship; University of California Irvine Esports; Twitch Student, and the CSU Entertainment Alliance. This speaker series focused on the connection between college esports and entrepreneurship, monetizing through streaming, supporting inclusive and healthy spaces on campus for gamers, creating career opportunities, and methods to successfully execute esports events.

“The Carlsen Center for Innovation & Entrepreneurship was excited to support in the launch of the Esportspreneur Expo,” says Carlsen Center’s Executive Director, Cameron Law. “We saw how a week-long summit catalyzed innovation and was able to connect and inspire new innovators and entrepreneurs in the esports space. Esports is a ripe place for innovative and entrepreneurial energy, and we look forward to more and more students exploring this space with all the opportunities it holds.”