ata football, a women’s soccer company with a mission to elevate the game globally through access and a community of fans, coaches and players, announced an exclusive U.S. partnership with NBC Sports to increase visibility for the best women’s soccer matches from around the world. NBC Sports and ata football teamed in 2020-21 to present 50 Barclay’s FA WSL matches across their platforms. This season, NBC Sports’ coverage of Barclay’s FA WSL coverage increases to 57 matches, including two on NBC and the remainder across CNBC, NBC Sports Network (NBCSN), NBCSports.com and the NBC Sports app. 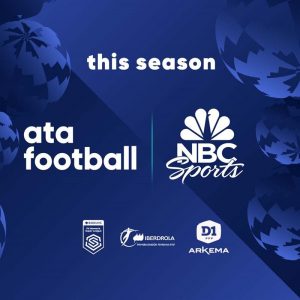 “Our vision from day one has been to make women’s soccer more visible, accessible and valued,” says Co-Founder and General Manager of ata football, Esmeralda Negron. “NBC Sports has been a tremendous partner, and we’re thankful for their role in putting the best in the world on center stage leveraging our exclusive rights and league relationships.”

In addition to their broadcast across NBC Sports properties, certain matches will be simulcast at atafootball.com. The site streams matches and exclusive highlights from around the world, as well as premium content via partners like Just Women’s Sports and The Equalizer, instructional videos, and virtual events. Users can subscribe to view live matches and gain unlimited content access at http://atafootball.com/members for $6.99/month or $4.99/month with an annual subscription.

ata football is supported by Miami-based investment firm 777 Partners. The company is part of 777’s growing portfolio of sports, media and entertainment properties. Other investments include Fanatiz, 1190 Sports, Nunchee, Sevilla FC and the London Lions.