Nickelodeon and CBS Sports are partnering with the National Football League (NFL) to bring slimetime to primetime for the 2021-2022 football season with brand-new content specially created for kids and families, including another slime-filled presentation of an NFL Wild Card game that will air on Nickelodeon on Sunday, Jan. 16, at 4:30 p.m. (ET) alongside CBS Sports’ coverage of the game on The CBS Television Network and NFL Slimetime, an all-new NFL half-hour weekly series on Nickelodeon, premiering Wednesday, Sept. 15, at 7 p.m. (ET/PT).

“Together with Nickelodeon, CBS Sports is cultivating the next generation of NFL fans,” says Sean McManus, Chairman, CBS Sports. “Our inaugural NFL Wild Card Game on Nickelodeon was an outstanding display of the power and the ability of ViacomCBS to continue to reach broader and younger audiences. We are thrilled to team up with the NFL and Nickelodeon this season, offering kids and families a full season of unique and unparalleled NFL content, including our second edition of the NFL Wild Card Game on Nickelodeon.”

“We are excited to continue our partnership with CBS Sports and Nickelodeon to present our game and content to young NFL fans and their families,” says Hans Schroeder, Executive Vice President and Chief Operating Officer, NFL Media. “Nickelodeon’s unique presentation of last year’s Wild Card Game was a success, and we look forward to another playoff broadcast this year and a new weekly show for families to enjoy.”

Following the success of last year’s Sports Emmy Award-winning NFL Wild Card Game on Nickelodeon, CBS Sports and Nickelodeon are teaming up again for a special presentation of an NFL Wild Card game on Sunday, Jan. 16, at 4:30 p.m. (ET), with one-of-a-kind content, guest reporters, original on-field graphics, virtual filters and more—all tailored for family viewing fun. The NFL Wild Card Game on Nickelodeon will air alongside CBS Sports’ coverage of the game, which will be available on The CBS Television Network and streamed digitally across devices via Paramount+, CBS Sports and NFL digital properties, and on mobile via Yahoo Sports and the participating teams’ mobile properties. 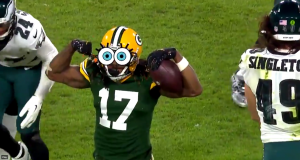 “Our coverage of the NFL Wild Card game was literally a game-changer in so many ways, and the sensational response absolutely proved there’s huge demand for sports content with the kind of kids and family point of view that only Nickelodeon can deliver,” says Brian Robbins, President & Chief Executive Officer of Nickelodeon, and Chief Content Officer of Kids & Family for Paramount+. “In this next stage of our tremendous partnership with the NFL and CBS Sports, we’re going to raise the bar again and help innovate sports programming to bring the whole family together for one-of-a-kind viewing experiences.”

Last season’s The NFL Wild Card Game on Nickelodeon (Sunday, Jan. 10, 2021)–the first-ever NFL telecast produced for kids and families–was Nick’s most-watched program among total viewers in nearly four years and the number-one cable telecast of the week with Kids 2-11 and Kids 6-11. Airing alongside CBS Sports’ broadcast on The CBS Television Network, the program generated more than two billion social media impressions and Nickelodeon was the number-one trending topic in the U.S. on Twitter during that afternoon. The NFL Wild Card Game on Nickelodeon was the recipient of two Sports Emmy Awards in the categories of Outstanding Playoff Coverage and Outstanding Live Graphic Design.

“I am excited to build on the success of last season’s NFL Wild Card Game on Nickelodeon with NFL Slimetime and another Wild Card presentation,” says Shawn Robbins, Executive Producer and Showrunner, NFL Slimetime. “From Nick-ified highlights, expert advice, kid-focused fun and special guest appearances, NFL Slimetime will wow kids and families as only Nickelodeon can on a weekly basis.”

“In extending and broadening this partnership, we wanted to deliver content that enables families to share their NFL fandom across generations – a key to growing our future fanbase,” says Amanda Herald, Vice President of NFL Marketing Strategy and Insights. “Collaboration across Nickelodeon, CBS Sports and NFL Media will allow us to deliver authentic and fun NFL coverage all season long.”