The Tokyo Olympics and Paralympics are complete and for the team at Panasonic Corporation, which delivered a wide range of equipment essential to stadium operation including large screen displays, audio systems, and more it’s time to reflect on the accomplishments and also get ready for the Beijing Games in February, 2022. Mr. Fumitaka Numata, Manager of Worldwide Olympic & Paralympic Marketing Section, Panasonic Corporation discussed the efforts with SVG.

Panasonic played a big part in various efforts around the Tokyo Games. Can you discuss some of the highlights for the Panasonic team?

Mr. Numata: One of the highlights is our support of the Opening and Closing Ceremonies.  This year, during the Opening and Closing Ceremonies of the Tokyo 2020 Games at the Olympic Stadium, Panasonic employed the latest AV technologies, including 60 cutting-edge Panasonic projectors, to augment the various performances. The incredibly well-received “50 Olympic Sport Pictograms” performance featured at the Opening Ceremony for the Olympic Games, for example, was shot live using Panasonic’s LUMIX DC-S1 cameras and S-R24105 lens (24-105mm F4 lens).

What were some of the Panasonic model numbers and types of equipment that were used during the games? 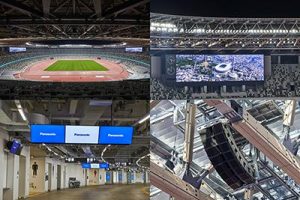 Panasonic played a big part at the Tokyo Olympics and will also be a part of the Beijing and Paris efforts in 2022 and 2024.

We designed, built, and provided technical support and equipment (approximately 180 system cameras, 140 decks, 50 switchers, 1,400 monitors, and more) for the 4K/8K television broadcasting system at the International Broadcast Center (IBC), as well as installed the large video display screen seen at the Tokyo Aquatics Centre, which was completed in February 2020 and hosted the Olympic swimming competitions. Through these endeavors, images showcasing the efforts of the participating athletes in the spectator-less Tokyo 2020 were successfully shared with the world.

The Tokyo Organizing Committee of the Olympic and Paralympic Games arranged the competitions to be filmed using fisheye lens cameras (LUMIX DC-BGH1) set up in the Olympic venues and projected onto “dome screens” set up across three venues in Tokyo along with Iida City in Nagano Prefecture and Fukui City in Fukui Prefecture.

This technology, one of several initiatives within the Tokyo 2020 Future Sports Viewing Project, allowed viewers to experience the same realism and energy as if they were in the Olympic venue itself.

In addition, for the first time at these Games, our IT/IP live video production platform KAIROS was used as a switcher for large video display equipment, along with our remote cameras (AW-UE-150) resulting in diversification of video expression.

What were some key trends that came out of the Olympics that people in the industry should be paying attention to?

The technology that powers the Olympic and Paralympic Games continues to evolve in order to immerse the global audience in unforgettable experiences. There are many new and developing AV/display technology and trends to watch.

This is an exciting feat. And speaking of the global audience, international broadcasting signals also continue to increase: 76 Full HD signals and 45 4K signals were used for Tokyo 2020, compared to 55 (Full HD only) for Rio 2016. And then add the Paralympics, which with 540 events is an even bigger undertaking.

Also, the expanded use of PTZ cameras allowed for the shooting of video from various angles that cameramen cannot easily access. It also attracted a lot of attention from the viewpoint of remote control video shooting thus decreasing the number of staff required within a venue which helps support Covid-19 countermeasures in the operation of an event.

Was there anything that surprised you during the various efforts that was easier or more difficult than expected?

With most of the world viewing the Olympic and Paralympic Games from home, there was a lot of pressure to ensure our technologies immersed fans in the action and created storytelling experiences that could inspire and amaze.

The pandemic posed challenges including rigid venue restrictions and having to find alternative solutions to the inability of foreign engineers to enter Japan. To solve these issues, we had to step up and play a critical role in many areas it had never ventured into before.

Regardless, our creative team stayed motivated under these strenuous conditions, striving to design a performance that would wipe away the troubles of the time. Being an event like no other, the honor of participating in the Olympic and Paralympic Games to spread joy and amaze the world was more than satisfactory enough. We hope to continue in the forefront of the new digital era brought about by the pandemic, using the latest technologies to create even more spectacular and inclusive events in the future.

Will Panasonic play a similar role for the Beijing games?