It has been 3½ years since the NFL announced that NFL Media would be moving from its longtime headquarters in Culver City, CA, to a brand-new facility adjacent to SoFi Stadium in Inglewood. In that short period, the NFL Media engineering, operations, and production teams came together to create one of the most state-of-the-art IP-based, 4K- and HDR-capable production facilities anywhere on earth — and they did it largely during a crippling pandemic. 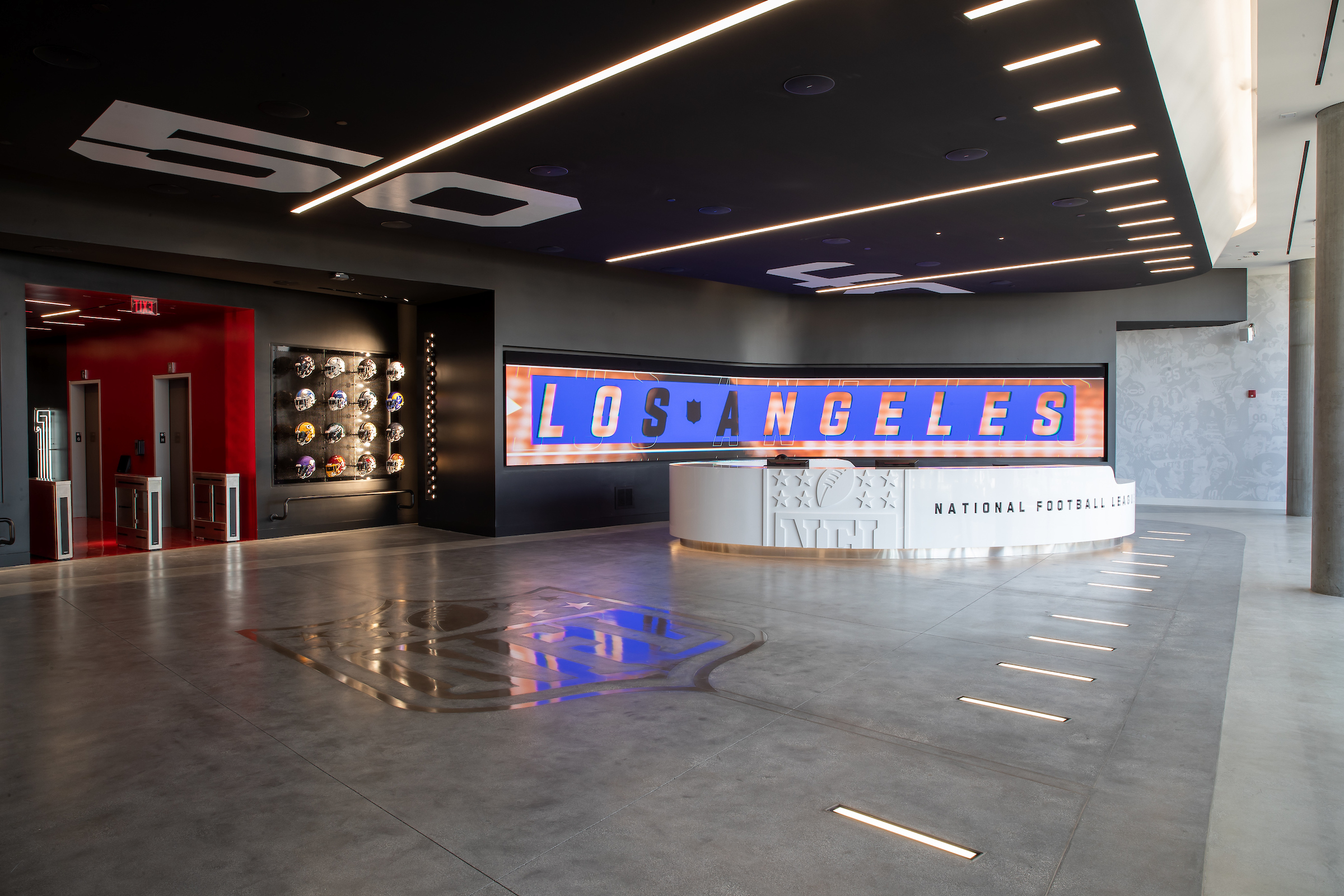 “Early on, we wanted to plant the flag and create a truly innovative facility that would be designed for all formats and all types of content creation,” says Dave Shaw, VP, head of media operations, NFL Media. “From the beginning, we built the infrastructure for not only how we currently do our jobs but also how we plan to do them in the future. And we never wavered from that goal, even during the pandemic. Of course, it impacted us, especially on the construction side, but we were able to be one of the few studios that continued building right through [the pandemic].”

The result is NFL Los Angeles, a 450,000-sq.-ft. Class A building at Hollywood Park with 214,063 sq. ft. of office space and 74,922 sq. ft. of studio and studio-support space to serve as the home for NFL Network, NFL.com, NFL RedZone, the NFL app, and many other departments supporting the league’s media and business operations. The facility, which officially opened on Sept. 8, now serves as the league’s new West Coast headquarters.

Out of the Gate: Committing to 2110, Preparing for 4K and HDR

From the very early stages of development, NFL Media’s engineering team looked to create a primarily IP-based facility that would be capable of live 4K and HDR production. While the live SMPTE ST 2110 IP-production ecosystem has matured greatly over the past four years, NFL Media was still in bleeding-edge territory when it committed to SMPTE ST 2110 and began making key IP-equipment decisions in 2018 and 2019. 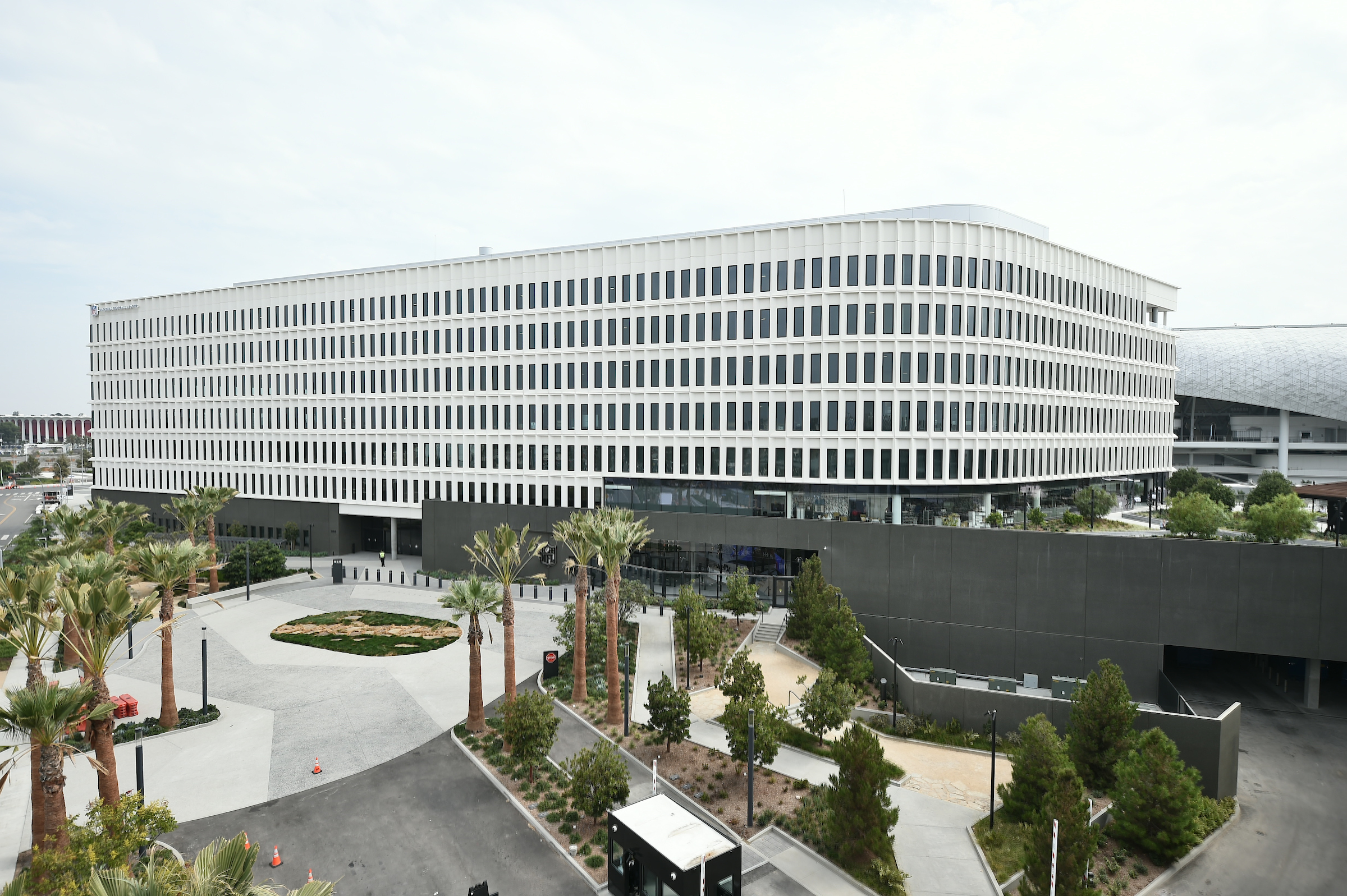 “When we started this process three or four years ago, we wanted to leverage all the latest technologies, including IP, which weren’t as mature as they are now. So it was kind of a leap of faith,” says Bruce Goldfeder, VP, engineering, NFL Media. “We did best-of-breed tests with all the key manufacturers and decided that we were comfortable enough to go with a COTS [routing switch]. Then we tested other [IP] components to make sure there was interoperability, and we found that it was possible to do.”

Although NFL Los Angeles launched as a 1080p SDR production facility, Goldfeder and his team also designed its backend infrastructure to be fully 4K- and HDR-ready for when the distribution market and archive/storage technology for these formats are more developed. NFL Media is currently producing 1080p60 broadcasts with Dolby 5.1 audio out of the building but is capable of 4Kp60 with Dolby Atmos 7.4.2 audio and can scale to any format in the future, including HDR or 8K. 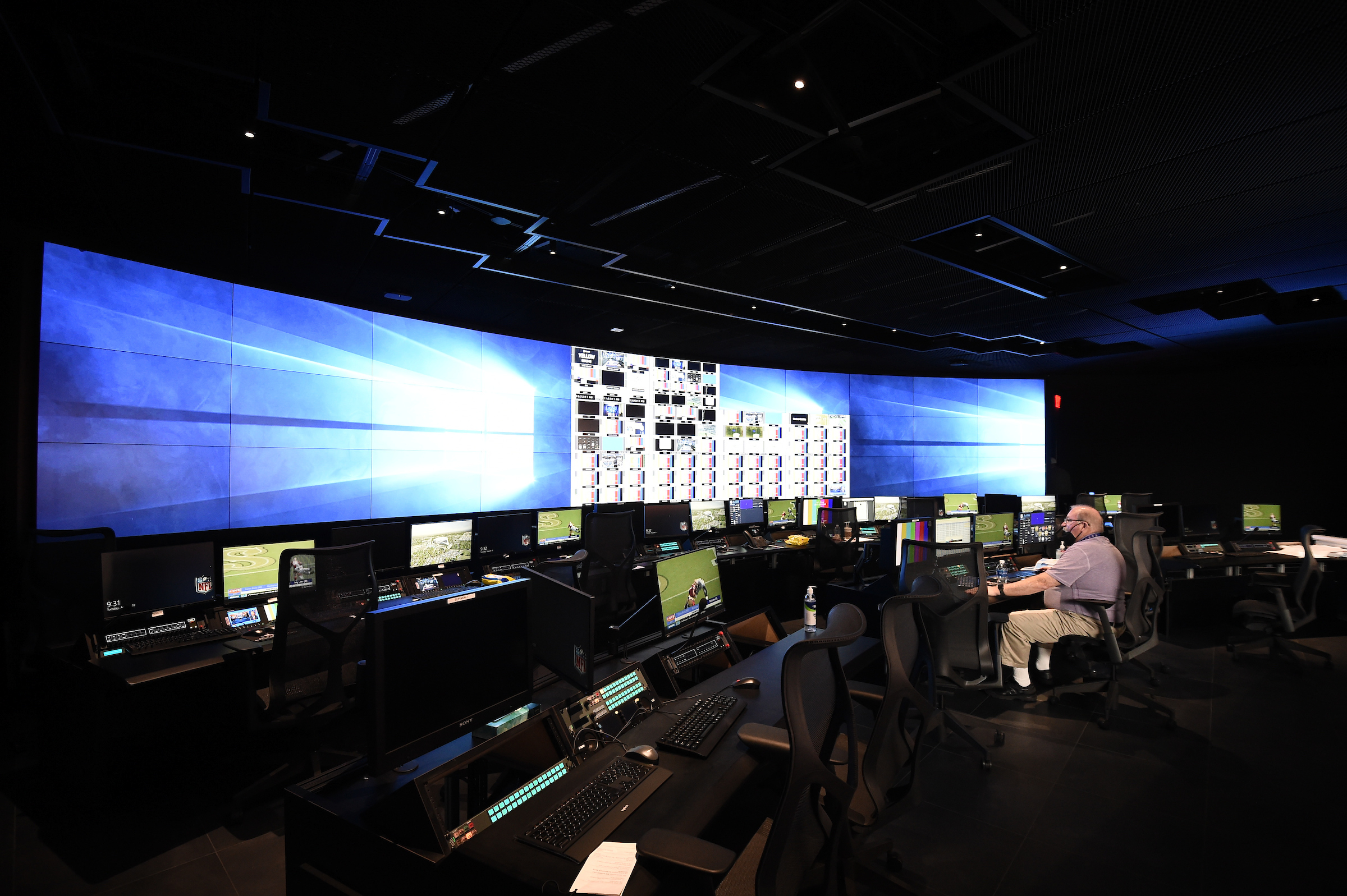 One of six production-control rooms at the NFL L.A. facility (Photo: Dan Steinberg/AP Images for NFL)

“We can do two 4K shows simultaneously right out of the gate,” says Goldfeder, “but we started off with 1080p SDR because we just did not have the infrastructure to change over all of our legacy content and archives. And we didn’t think it was prudent to make that jump at this time. All our cameras are ready to go [for 4K HDR], but we just weren’t ready to make the storage commitment to make everything 100% 4K-compatible. That said, it’s very scalable for any format in the foreseeable future.”

Another early goal for NFL Media was that the new building serve the diverse production needs for its various content operations — not just NFL Network but also content creation for digital, streaming, and social media.

“Right now, we’re flexible, and we can support traditional [linear] production, digital production, social production,” says Shaw. “We’ve truly built a facility for all. We also wanted to have a facility that users were going to enjoy and that gave them the best possible technology and high-end workspaces.”

Once NFL Media tapped Diversified as its technical-systems-integration partner, Goldfeder and his team created a Technical Lab at Diversified’s 20,000-sq.-ft. warehouse in Burbank, where the majority of the equipment (including the core switching and networking systems) could be prebuilt while construction was completed at Hollywood Park. 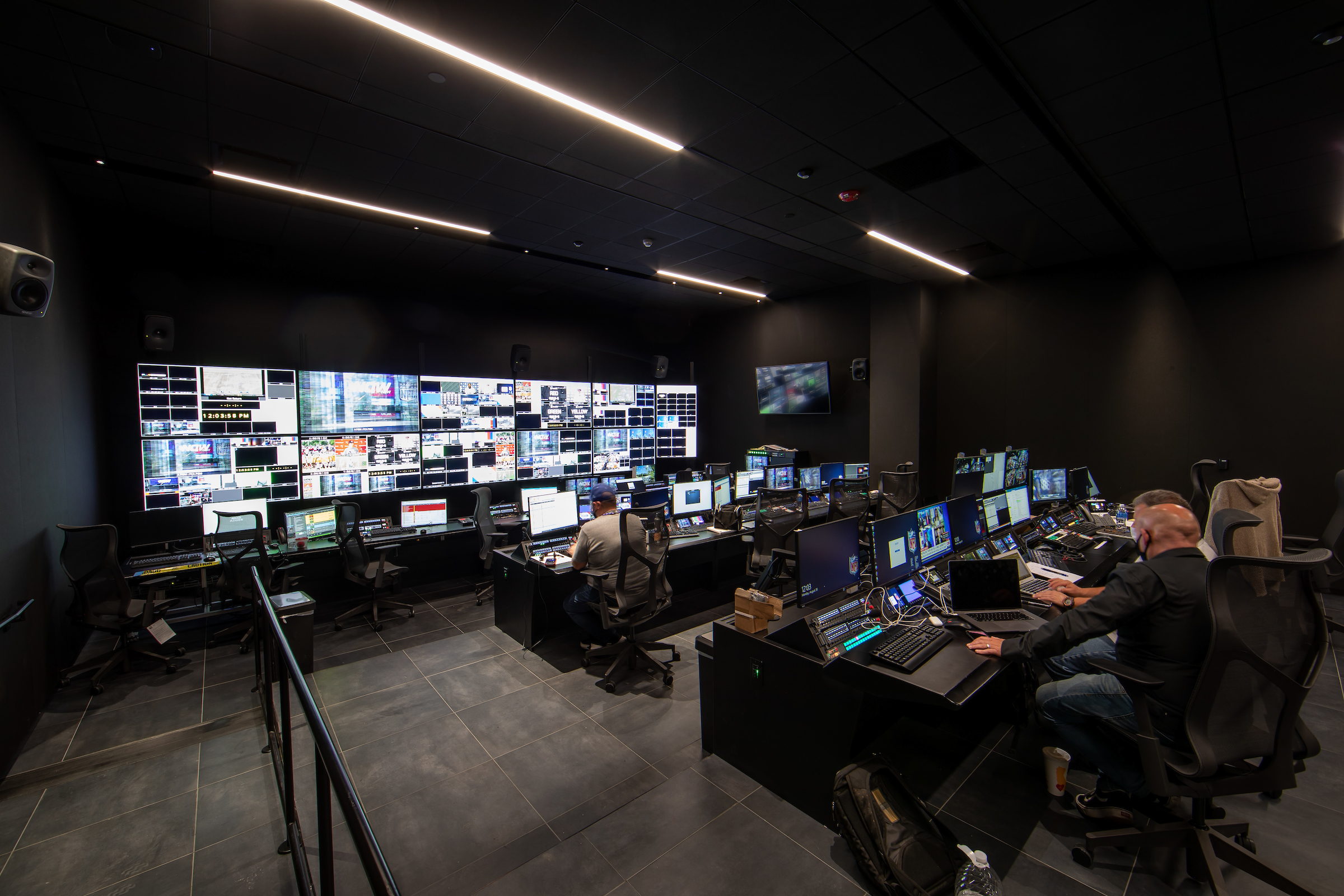 Much of the technology was integrated in Burbank prior to arriving onsite at the new NFL L.A. facility. (Photo: Jeff Lewis/AP Images for NFL)

Because of the pandemic, however, the majority of equipment vendors were unable to be onsite in Burbank for that part of the process. As a result, the NFL Media and Diversified engineering teams took on much of the technical integration themselves. Despite the challenges, the majority of the technical systems were built in Burbank in time for NFL Media to move into the new NFL L.A. building.

“We were able to test everything out, and, with the help of the manufacturers remotely, we were able to become very knowledgeable on all of the different aspects of PTP timing, 2110, and gateways and converters,” says Goldfeder. “When we got into the new building and we only had two or three months to build it out, we were able to accomplish that based on the knowledge that we already had.” 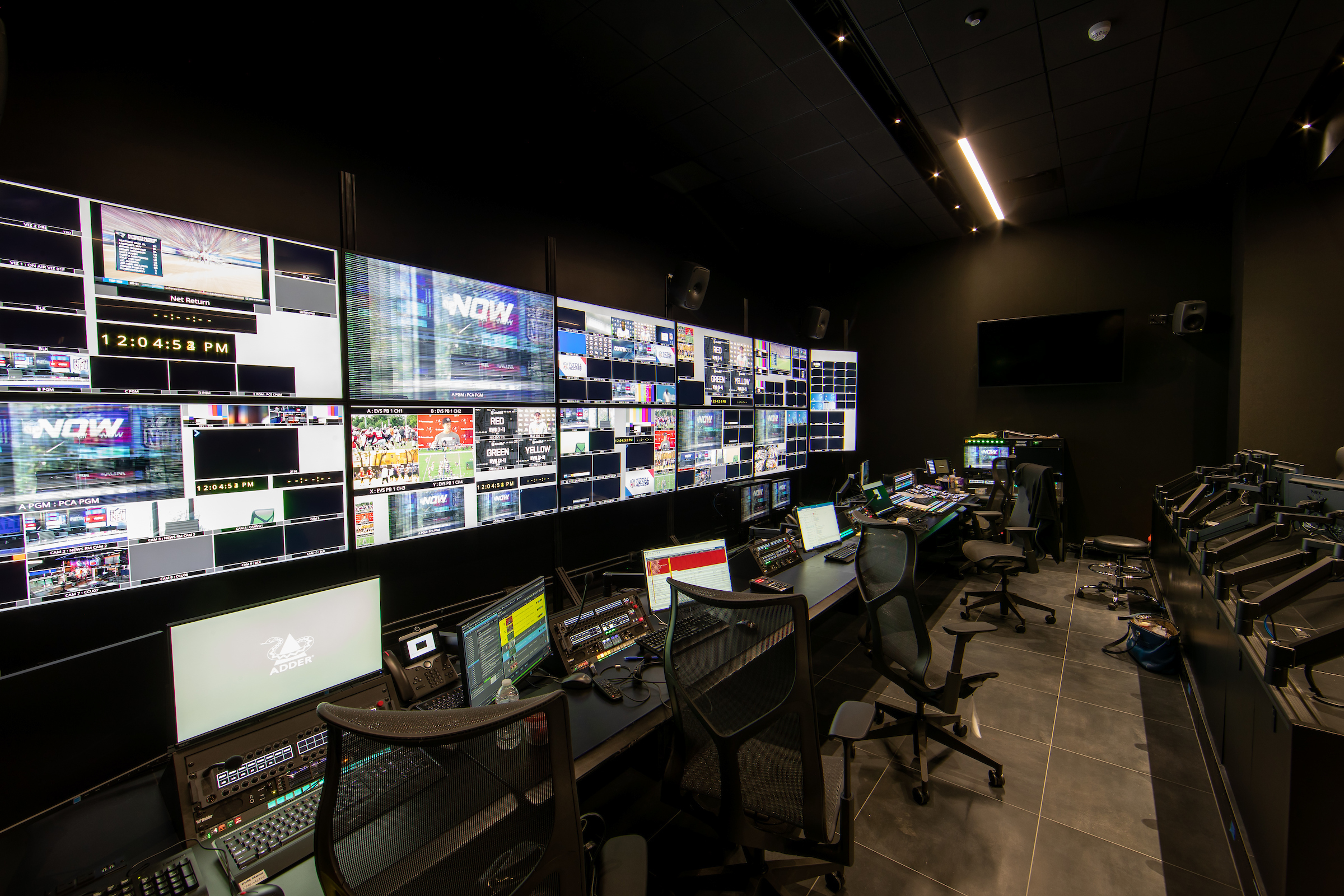 The NFL Los Angeles facility launched in time for the 2021 season despite pandemic-era challenges. (Photo: Jeff Lewis/AP Images for NFL)

The pandemic also had a major impact on the design of the building itself and resulted in multiple unforeseen delays due to global supply-chain shortages and COVID-19 shutdowns. However, NFL Media was able to persevere and open the building on time complete with the latest safety, air-filtration, and touchless technologies.

“We worked hard to make it a safe and great experience for when people were coming back to the office,” says Shaw. “We also wanted to have a facility that was not only safe but that users were going to enjoy and that gave them great high-end workspaces and plenty of collaborative areas, sunlight, green space, and much more. This is what we do for a living at NFL Media every single day, so I think, for the employees, this is just an awesome place to be right now.”

The Team: Primary Contributors From Engineering, Ops, Production, and More

SVP/GM Dave Jurenka and SVP/Head of Content Mark Quenzel oversaw the project from lease to execution of every step.

“This facility has its character and devotion to employees based on leadership of Dave Jurenka and Mark Quenzel,” says Shaw. 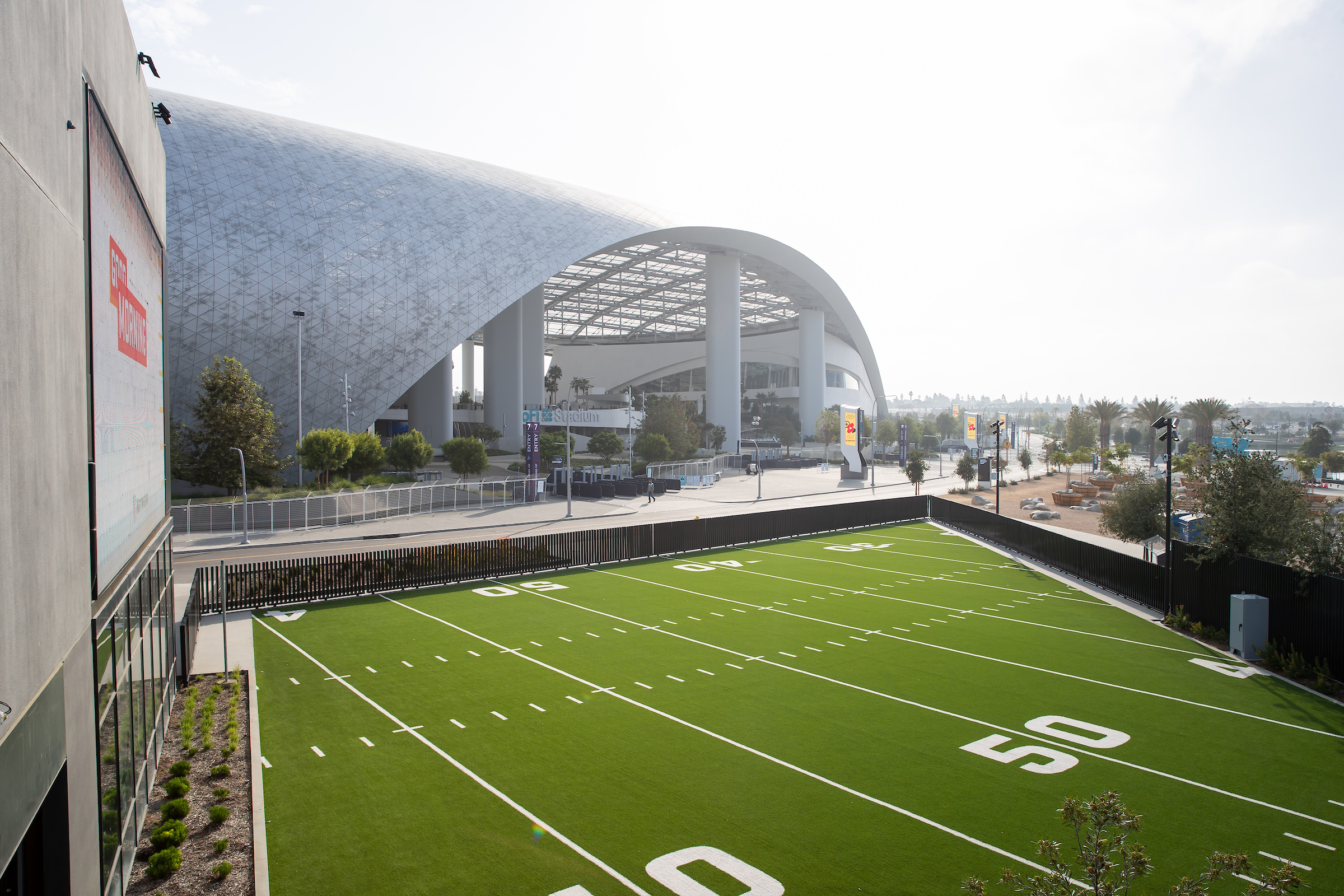 Goldfeder oversaw all technical infrastructure and a part of the full building, HVAC, and much more. Meanwhile, Operations Manager Katie Funk played a key role in everything from budgets to legal to all things operational.

“Bruce Goldfeder poured his heart and soul into this project, and his years of experience and relationships in the business have led him to this technical marvel,” says Shaw. “And Katie Funk is the tireless unsung glue to the project who dove into every operational detail ranging from budgets and legal to furniture and moving.”

“I think the in-house knowledge that Bruce’s team has is second to none in our industry,” says Shaw. “When they built that Technical Lab [in Burbank], that was the real game-changer and set us up for success.”

“I am so pleased to have such an amazing operations team who take on all tasks, including planning and execution to open this new facility, led by Jessica Lee and Madelyn Grassi,” says Shaw.

“We went through a pandemic, and we learned a lot along the way,” says Shaw. “We couldn’t haven’t gotten through it without tapping into all of our great people. Everybody worked together on all fronts. It’s rare when you see a production team, an engineering team, and an operations team working so closely together. And it took every single person to make this happen in time.”