The Boys of Summer grow up into the Men of Autumn. The MLB Postseason begins this week, and Turner Sports is back to deliver the entire National League side of the bracket on TBS. 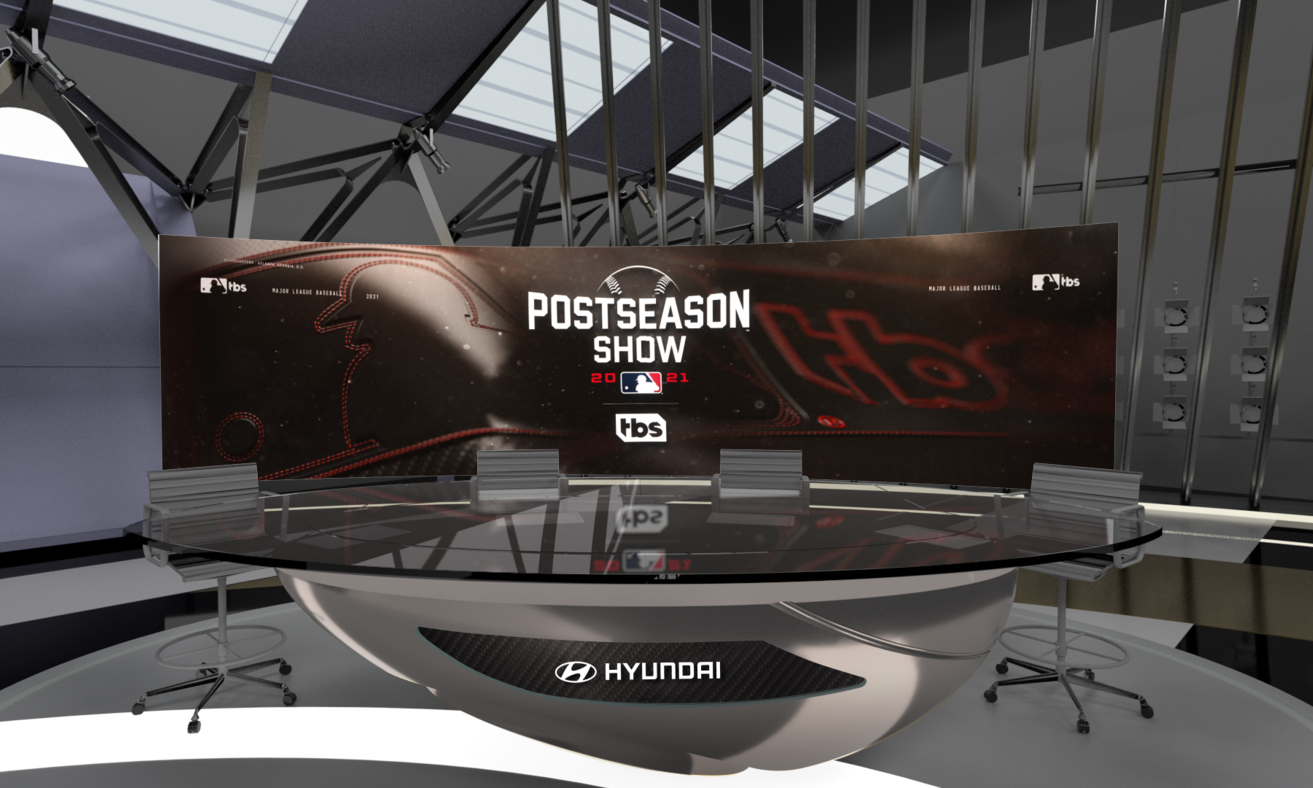 For the 2021 MLB Postseason, Turner Sports will debut a new set at its Atlanta headquarters. The set design features a large LED screen and two green screens. (Image: Turner Sports)

Given the rights extension with Major League Baseball that was signed in September 2020 and kicks in at the start of the 2022 season, Turner has put heavy work into upgrading the on-screen look of its MLB property with a new studio set and an in-game animation graphics package, both of which debut on-air Wednesday night during the network’s coverage of the National League Wild Card Game (St. Louis Cardinals at Los Angeles Dodgers, 8 p.m. ET, TBS).

“We re-looked at everything,” says Steve Fiorello, VP, coordinating director, Turner Sports. “We throw a lot of technology, people, and great new ideas at this property.”

In its Atlanta studios, Turner is set to debut a brand-new MLB set that will anchor its coverage this postseason and carry on into the network’s new weekly Tuesday-night game franchise next season. 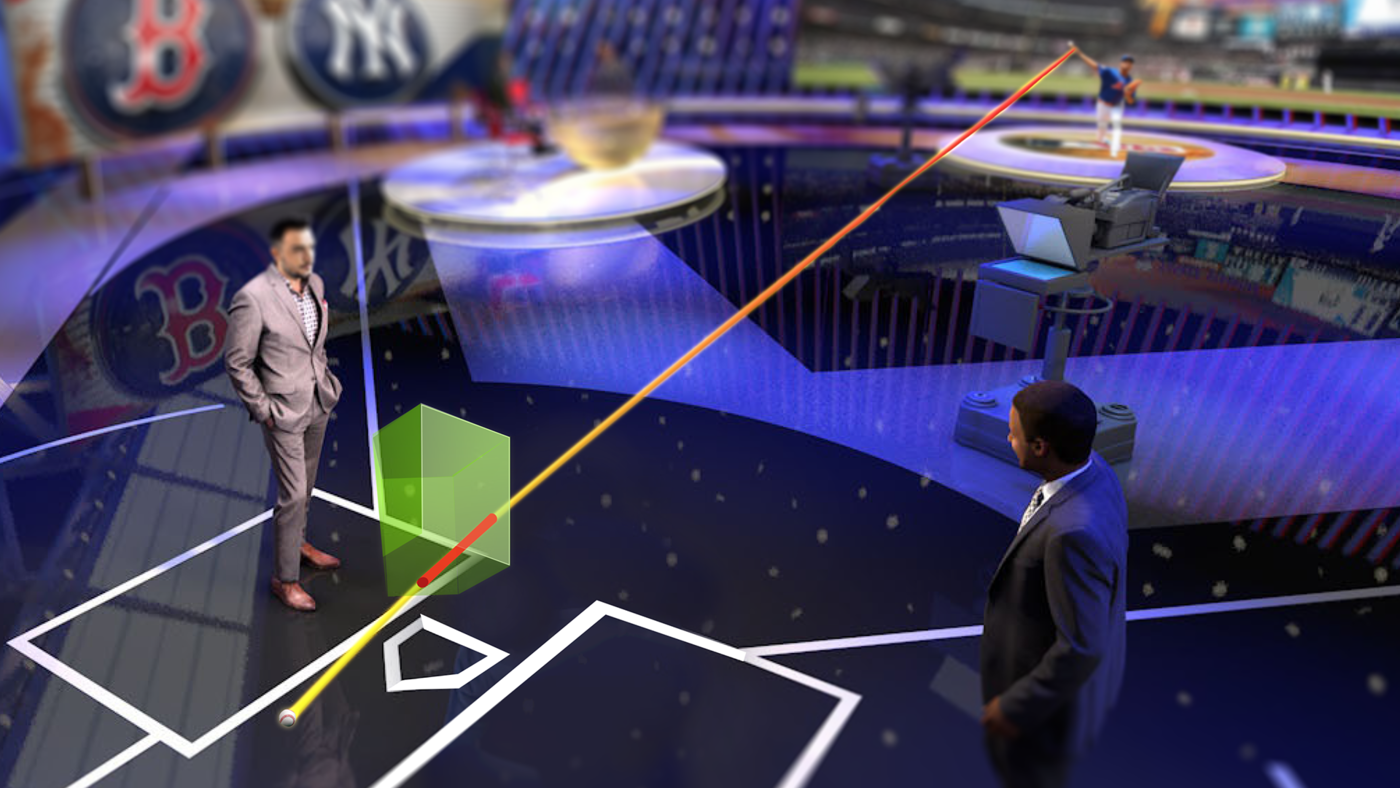 Working with the popular set-design firm, Clickspring Designs, Turner’s team has built out a big space, featuring one large LED screen and two green screens that will make the space reliant on a heavy complement of augmented-reality graphics.

According to Fiorello, Turner’s on-air studio talent for MLB like to get up and break down plays rather than spend too much time behind the desk. Two green screens allow the graphics team to create a more immersive environment for their analysis. Fiorello points out that, although Turner has used AR elements in studio coverage before, this is a noted “step forward,” enabling the team to have AR elements both in front of and behind the talent simultaneously.

“We are really going hard on innovating in the utilization of AR,” says Turner Sports VP/Creative Director Jordan Shorthouse. “We have two massive green screens, which are a challenge. You have to deal with reflections off the green screens, and you need to make sure that you always have content feeding to those areas. We welcome challenges, and we are fortunate to work for a company that welcomes new things. So we’re going for it.”

One of the cooler examples of the set’s capabilities is a special animation in which a full body shot of a player walks from the LED screen on the set into the stage environment with the talent. Turner intends to play with this in a fun way, spotlighting star players while unveiling full batting lineups in pregame. To pull this effect off, Turner uses a real-time virtual studio and augmented reality platform from the technology company Zero Density.

Fiorello says that, toward the end of the regular season, the Turner crew met with many of the teams in postseason contention to shoot players for this specific green-screen activation, so that all the looks with be new and fresh.

“The players were so geeked up about participating in this,” says Fiorello. “It was a great vibe and a lot of positive energy around it. They were coming up with ideas for movements and poses. We were worried about asking, during a pennant chase, to participate in this green-screen thing, but the teams were super helpful. It was cool to see the players really into it.”

The set features six cameras, all of which are capable of tracking and displaying AR graphics, with the help of a solution from Mo-Sys. The set has a large JITACAM on the ceiling, a roving Steadicam on the stage, and four hard, operated pedestal cameras.

“One of the things I love about this set is the way that it scales out,” says Fiorello. “When you walk into this set and the environment, it feels like you are in a baseball stadium. The structure and the architecture are so heavy that it feels like a dense, structural environment.”

In-Game Animations Get a Refresh

In addition to the strenuous augmented-reality work needed for the studio, the Turner graphics team has also designed a new look for its in-game animations and transitions for this postseason with the goal that they will be carried into next season and the new leg of the MLB rights deal in 2022.

The animations — which include team-based transitions and player-focused “due up” animations — are designed to provide a fresh look for Turner’s product.

“I wanted to do something that leaned into reaching a younger demo — something a lot more contemporary and fresher,” says Shorthouse, whose team is also working on new NHL and NBA graphics packages debuting this month. “There seems to be a design style right now that’s inspired by social. We wanted to have fun with that and creatively skew a little bit younger.”

He notes that the process on the new graphics began last February when the team first started taking pitches. The work on what viewers will see on screen this month began in June.

Although there are new in-game animations, the scorebug design remains the same. The only difference is that it will move from the bottom-left corner of the screen (where it was last postseason and throughout the 2021 regular season) – to the top-left corner.

Turner Sports works with both SMT and the Ross Xpression for all of its graphics playout both in game and in studio.

For live game coverage, Turner’s take on the shallow–depth-of-field trend that has swept the industry will also make its MLB Postseason debut. The Turner team has tweaked its rig a bit, now rolling with a Canon EOS C70 camera paired with the RF15-35mm F2.8L IS USM lens. The setup will be used for hero shots on the field. In addition, Jibtek will be using a variety of Canon broadcast lenses for Turner’s TrolleyCam. 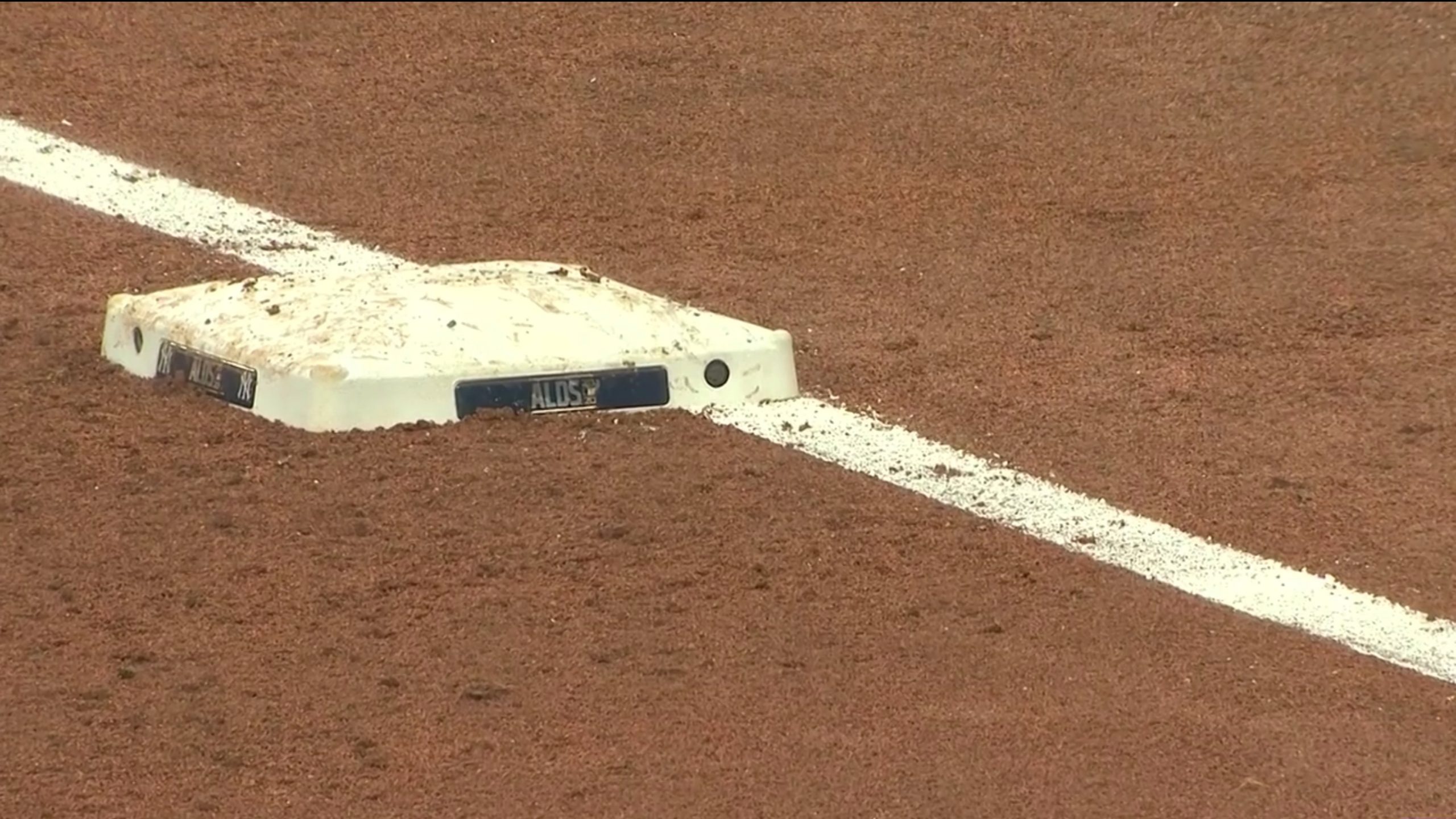 For game coverage, Turner Sports is bringing back Base Cam, shown here during its debut in the 2020 American League Division Series.

The network will also bring back Base Cam, which debuted during the 2020 MLB Postseason. A camera installed in each of the three bases on the base paths provvides unique angles on base runners during replays.

“That’s one of the things that we have that’s really ours,” says Fiorello. “We certainly put a premium on that. It’s a look that no one else has, and we got a lot of great looks from that last postseason. I feel strongly that there’s going to be a play that the only angle you are going to be able to tell if the player is safe or out will come from that camera. Once that happens, it will be a big moment.”