While much of the attention for the NHL’s return to ESPN tonight is focused on the broadcaster’s innovative game productions, ESPN’s team has worked equally hard to ensure that the studio product is just as groundbreaking. In addition to launching a studio for The Point — ESPN’s new NHL-focused studio show — at its Bristol, CT, facility, ESPN has also built a pair of REMI production-control rooms and an innovative switching workflow to support wrap-around coverage of each game.

Inside Studio F: Technology and Style Meet at The Point

The Point, which premiered on Oct. 7 and is airing daily Oct. 12-15 before moving to its weekly home at 3 p.m. ET Thursdays on ESPN2, originates from Studio F in the DC1 building on the Bristol campus. 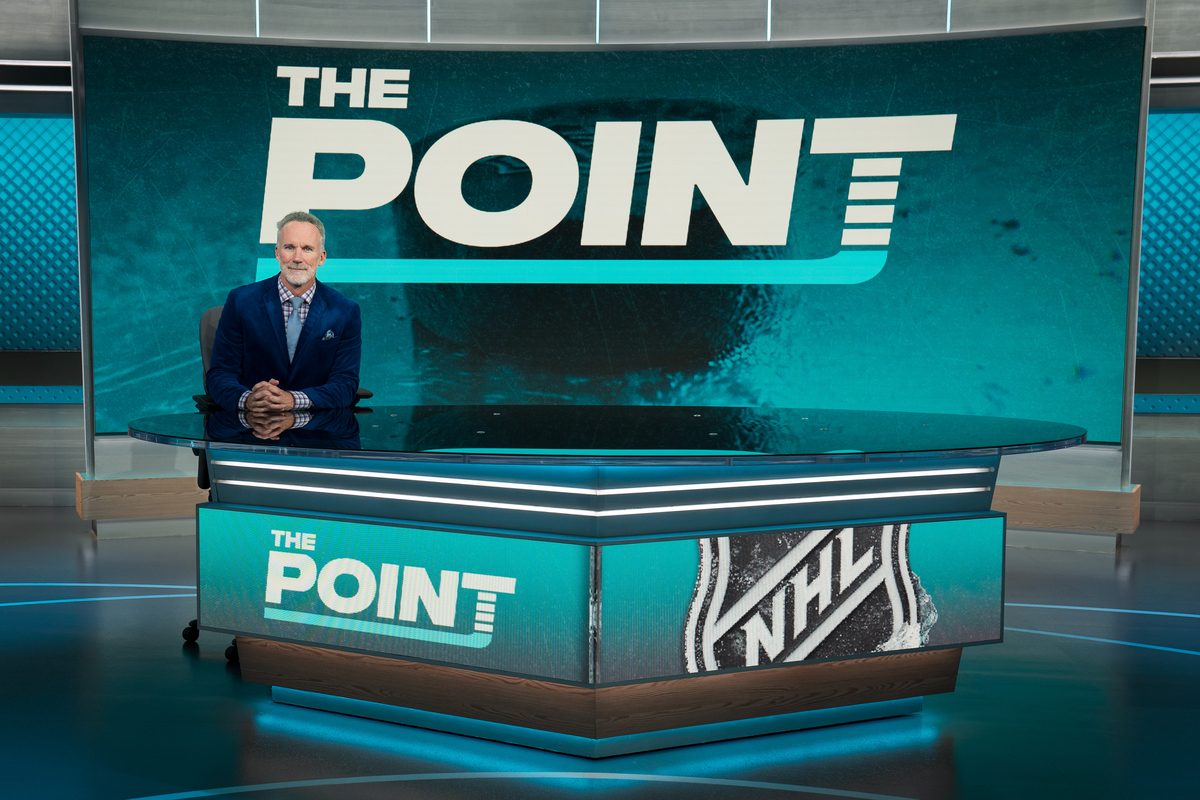 John Buccigross, primary host of NHL 2Night on ESPN2 from 1998 to 2004, returns to the host seat for The Point. (All photos: Kelly Backus/ESPN Images)

Originally a SportsCenter studio, Studio F has been used as a wrap studio in recent years. When ESPN obtained the NHL rights package, the studio-operations team opted to split the 4,357-sq-ft. area with two-thirds of the space going to the new NHL studio and the other third reserved for a future project. A wall was erected, the studio was gutted, and the studio-design team began with a clean slate.

Studio F is one of the facilities inside DC1 that has been upgraded from 720p to 1080p (the entire building will eventually be 1080p like its counterpart DC2), and it is equipped with 4K-capable cameras.

The main desk can accommodate up to five hosts and analysts and has removable wings with LED displays, allowing the size to be adjusted on the fly to meet the needs of the show or segment. 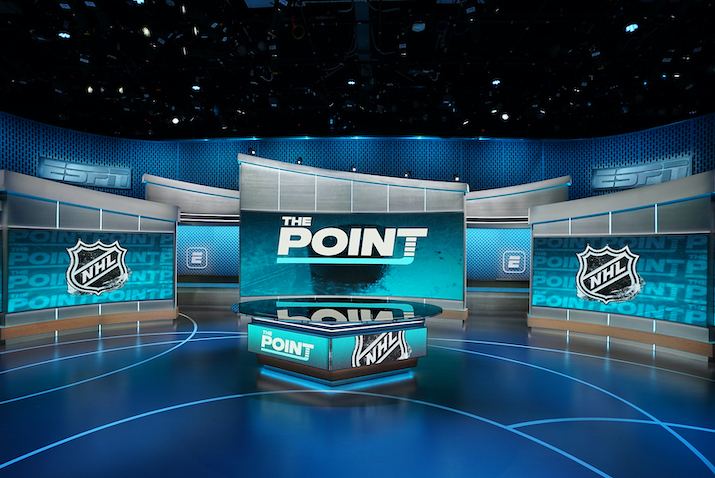 “With those removable wings and the LED displays integrated, the desk can be extended when you have more [on-air] talent or can be shrunk down if you have less talent,” says Tony Lacaprucia, coordinating operations specialist, ESPN. “The main desk can be shot in a traditional sense, or it can be shot in the round. The large LED display directly behind the desk has two alcoves where we can put cameras so they’re out of sight. They don’t make it into the other camera shots, which allows us to shoot in the round.”

The studio features an interview area with swappable scenic pieces that allow ESPN to easily switch among a variety of looks: traditional desk, casual seating with a coffee table, demo area, virtual/AR. This area also has a trio of 1040×624 LED walls. 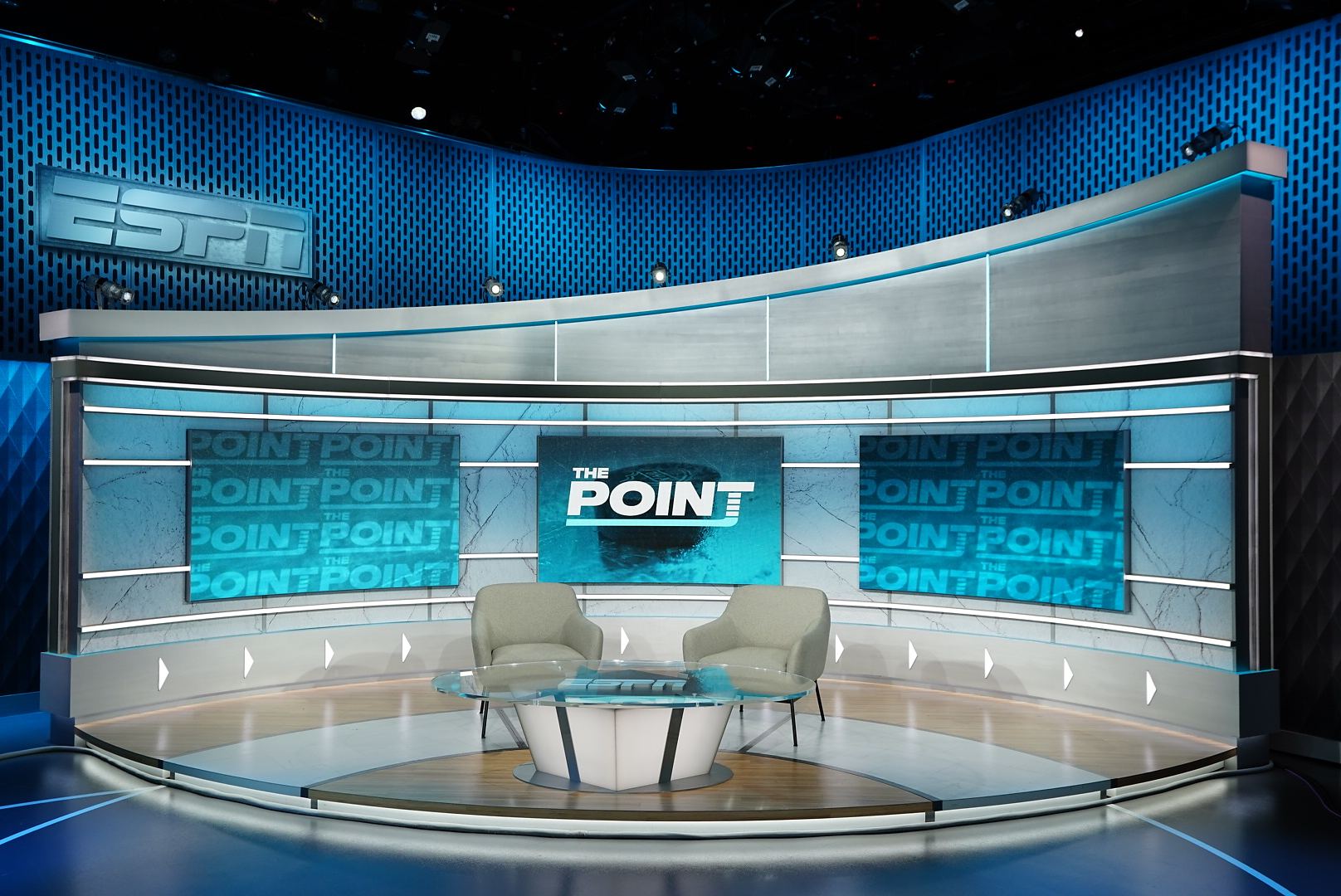 “The template we use for all our studios is that everything has to be versatile, but that space is especially unique and versatile,” says Lacaprucia. “We have to be able to adjust and rebrand very quickly, and this studio allows us to do that.”

The third area of Studio F has an 86-in. Phillips 10-point touchscreen, the only non-LED display in the entire studio.

Besides manually operated cameras, the studio is equipped with two fully robotic cameras. A MoSys eCrane running on StarTracker real-time optical-camera-tracking software allows AR elements to be integrated into the show live.

In addition to The Point and In the Crease from Studio F, The Drop, a 30-minute digital live-streaming production, originates from the Studio E Lounge set in Bristol.

REMI, REMCO, and Wraparounds: Bristol Is the Hub

In addition to the new studio, Bristol will serve as the home to REMI (Remote Integration) and REMCO (Remote Control) NHL productions this year and also serve as the hub for its extensive wrap-around coverage throughout the season. To support the REMI workload for NHL and other shows, ESPN recently built two production-control rooms.

“Between REMI, REMCO, and studio [operations], it’s quite a new challenge, and we couldn’t ask for better people to be involved in taking it on,” says Joel Banks, senior manager, production operations, ESPN. “We have developed unique workflows to manage multiple streams [to serve] ESPN+, ESPN linear, and the various end points for each of these events. We have developed workflows that allow us to do [wrap-arounds for] multiple games at the same time out of the same facility.” 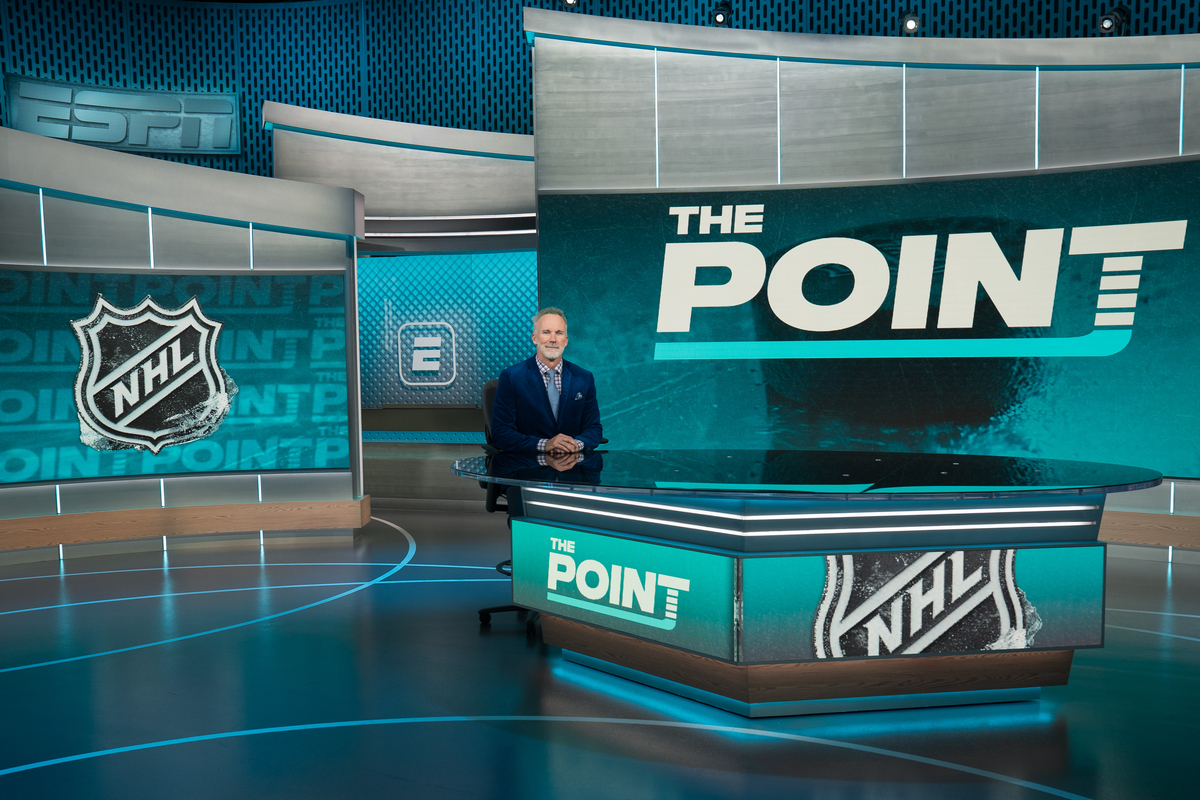 Under this production model for wrap-arounds, the TD in the control room responsible for wrap-around coverage of each game uses innovative switching to send multiple versions of simultaneous events to the Bristol Transmission Center for delivery to ESPN, ESPN+, ABC, or Hulu. As a result, what would previously have taken multiple master-control rooms can now be done in a single production-control room using innovative switcher resources.

“Given that we will have some doubleheaders, games that slightly overlap, and things like that,” says Banks, “we knew we may have to do wrap-arounds on multiple networks at similar times. So we had to rethink how we were going to handle that. We have the source to master control be the PCR, and the output of that PCR could be the PCR itself, or it could be a REMI [control room] or the truck in the field. That PCR is essentially playing master control.

“When it’s time for a cut-in or [wrap-around] on the ESPN [linear network],” he continues, “the master-control operator doesn’t need to do anything; the PCR handles all of it. [The operator] coordinates with the truck or with the REMI [control room] and makes a natural transition into the cut-in, out of the cut-in, and then back into the game. It’s more of an organic feel, as opposed to having the REMI room, the truck, the wrap-around room, and an integration room all working independently. You remove all that added coordination and create the opportunity for talent to focus on the broadcast.”