NAB may not be happening this week but Sony is introducing some new products as it continues to drive improvements across its product line. The goal? A transformation from a company known primarily for physical media and hardware to also being a leader in cloud-based production and even distribution services.

A big part of the transformation has been a result of the acquisition of Nevion in September of 2020. Deon LeCointe, Sony Electronics, director, Networked Solutions, says Sony created a new team that is focused on bringing Nevion’s orchestration and management solutions together with Sony’s IP-enabled products, cameras, and switchers. 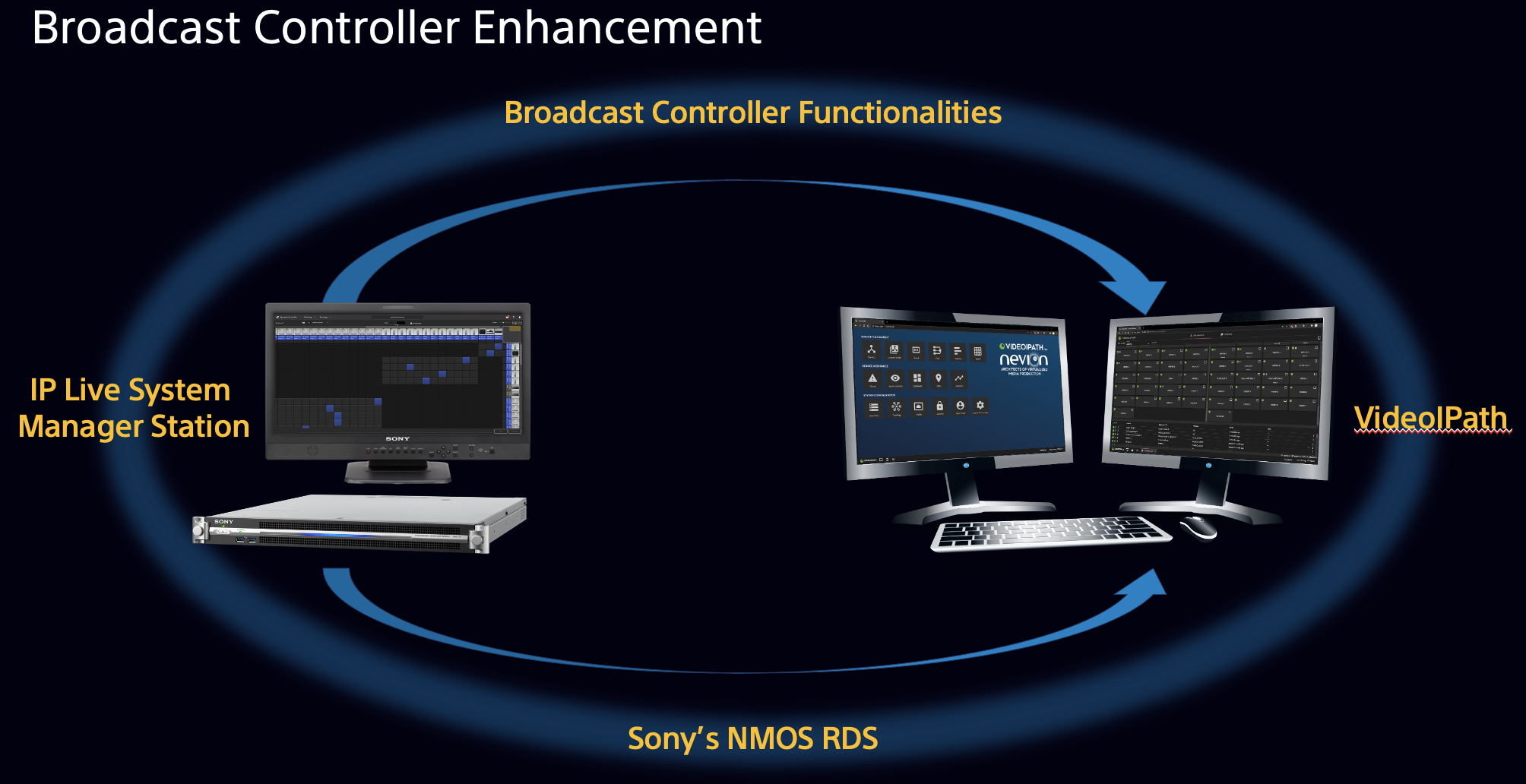 The acquisition of Nevion has helped Sony complete its production ecosystem.

“We’re really taking a holistic approach toward the market about how we position these products and services and how they benefit the market overall,” he says. “IP is a foundational technology that’s really helping people to drive remote production, but there’s also a strong move toward cloud. We’re trying to address the needs in IP environments, cloud environments, and hybrid environments because we do think hybrid is going to be the way a lot of people are going to operate until we’re at a place where people feel comfortable going fully virtualized, fully cloud.”

Nevion’s VideoIPath, for example, is an orchestration and SDN control system that provides connection management, service assurance and network inventory capabilities for service providers and broadcasters. The system may be used for managing a variety of networks ranging from international or national contribution networks to broadcast facility or campus infrastructures.

As concepts that used to be only heard in IT (Mesh, Dual Star, Spine Leaf) begin to be part of the broadcast engineering workflows, Sony believes its new division will make it easier for the two worlds to come together. 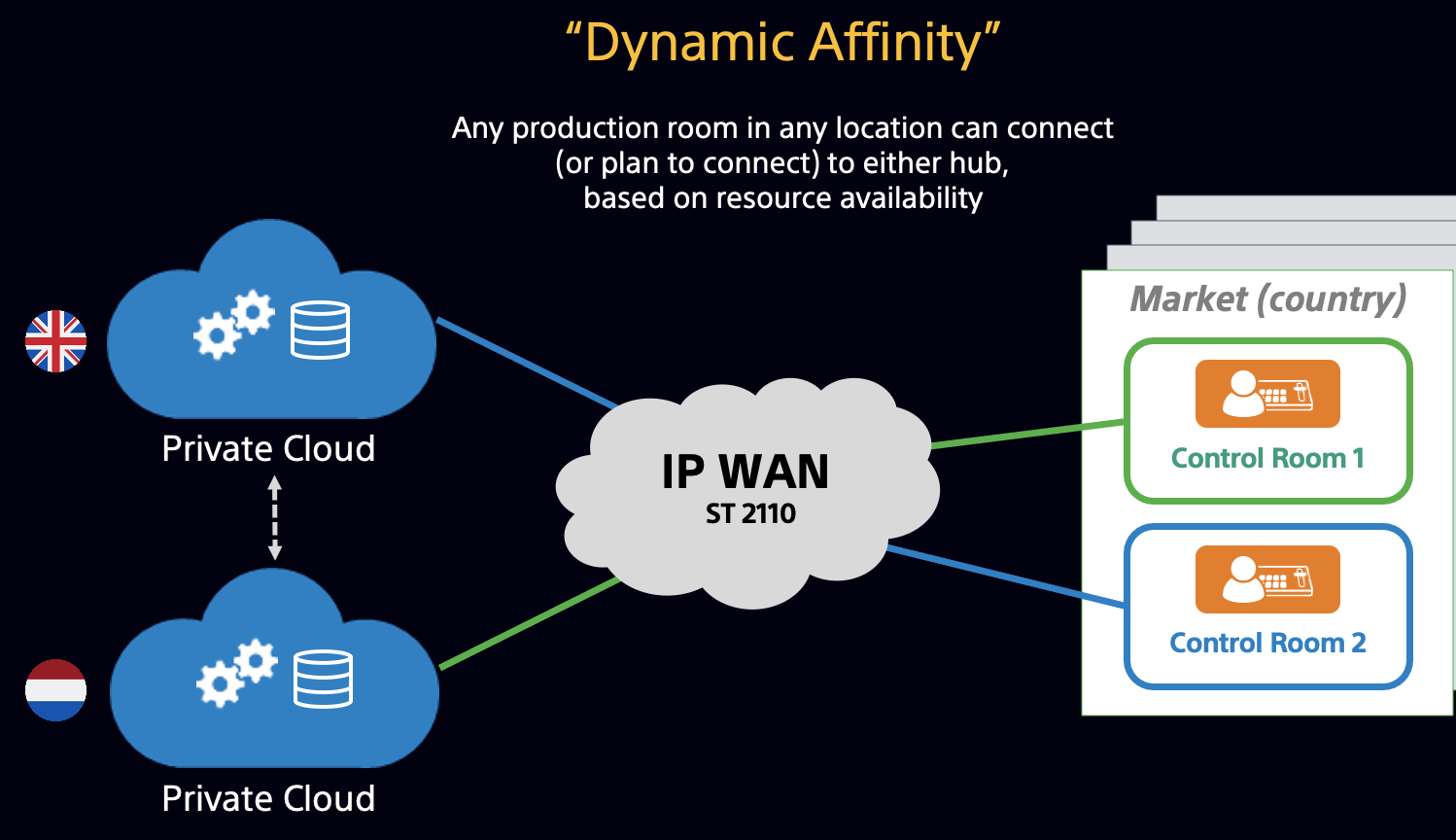 The combination of Nevion and Sony cloud services is giving companies like Discovery a new way to work.

An example of the system in action is a Discovery Communications which has used it to create two private clouds, one in the UK, one in the Netherlands.

“We created a concept called dynamic affinity,” says LeCointe. “The idea is that any production room in any location can be connected to either one of the two clouds and they were using Nevion solutions to decrease the bandwidth and provide service assurance between the different clouds and the different production control rooms.”

Low-latency JPEG-XS is being used to provide lossless transmission and near real-time operations across thousands of miles.

“With JPEG-XS and Video IPath they were able to consolidate the technical resources into key data centers around the globe,” says LeCointe. 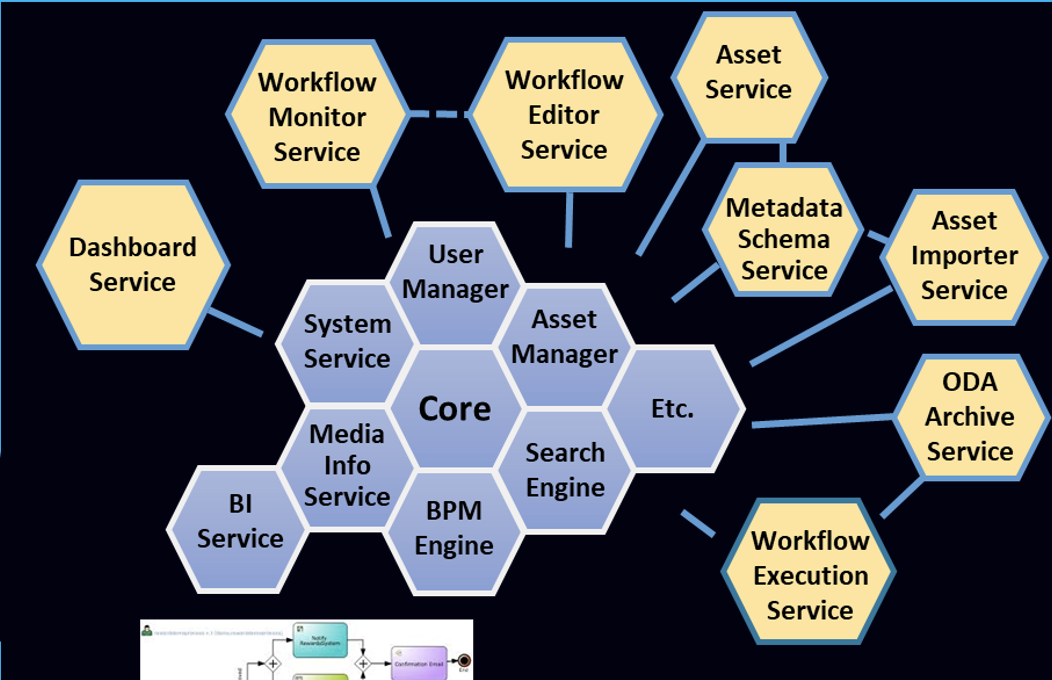 The NavigatorX software architecture allows for micro services to be connected.

Hugo Gaggioni, Sony Electronics, Pro Division, Chief Technology Officer, says Sony one transformation is moving away from a monolithic approach to cloud services to one that is based around micro services for production and other functions.

“Before we had a really comprehensive machine application with tons of functionality that in some cases the end user could care less about,” says Gaggioni. “We were selling a gigantic piece of and then some would say they just want the input management system. So, we took those functions apart.”

“They can be deployed by customers to the scale required depending on the complexity of the end user requests,” says Gaggioni. “We also can optimize and develop the microservices independently as when they are tied together as a very complex piece of software it is difficult to make a tiny change. And now if a micro service fails the rest of the system would continue to operate properly.”

Quick updates and fixes are only two of many benefits. It also allows for each service to be scaled as needed and deployed only where needed. For example, toolkits can be joined together to create media supply chains, automatic scene selection, production platforms for multiple programs, and more. More importantly, they can all share the same hybrid cloud system structure and be connected to other Sony systems, like Hawk-Eye, to improve functionality. The ability to capture live events directly into the cloud environment coupled with the Hawk-Eye System provides a one-two punch that is allowing professional sports leagues around the globe the ability to quickly get content to a variety of stake holders.

Explains David Rosen, Sony Electronics, Pro Division, VP, Cloud Application and Solutions: “It allows organizations to accelerate the time that people can get access to that content,” he says. “That allows for live streams to be available to social media teams but also to the medical staff so they can spot injuries more quickly.”

Plus, the use of the cloud allows for content creators or league officials to review content anywhere.

“They can actually clip out the area that they’re interested in and then share that to other officials that need to take a look at it,” he says. “And the ability for social media teams to post directly and the editorial team to clip out highlights and share those out to online parties is a great new win for leagues like the Canadian Football League.”

A key part of the solution is Stream Relay which can take streams and then push them into the right locations in a venue and beyond.

“The Ci workspace is the immediate collaboration platform that provides access and visibility to the content and then the Wrangler microservice defines when there are certain things that need to happen for a specific customer.

For example, a league can have all content streams from various matches encoded and then directed to Stream Relay which is tied to a Global Event Manager tool that reads third-party data sources (things like the match schedules and lineups) and then tags that data to the video stream.

“The recipients of that could be the league, local broadcasters who may have access to some feeds but not all and then certain officials or certain employees,” says Rosen. “And certainly, all the social media teams that want access to that content can begin clipping sharing and posting immediately.”

Rosen points to other new features, including direct scheduling and stream monitoring to give even more flexibility. Direct scheduling allows for manual input of schedule information, perfect for organizations that don’t have access to metadata services, or they are holding a one-time event.

“They can schedule start and stop times for streams to be captured,” says Rosen “And we also have a monitoring function to allow the user t

holistically see everything and manage them directly in the user interface.”

Rosen says Sony is also looking to add SRT support by next spring as well as a stream syndication function.

“You can apply metadata logs from one angle to every other angle seamlessly and easily,” adds Rosen.

Dan Cash, Director, Hawk-Eye Innovations North America, says the big news this year has been the NFL relying on the system for replay review as well as the use of the system by broadcasters for at home productions.

“We put hardware on onsite and then replay operators will sit at home and drive the replays from their living room,” says Cash. “It’s been a great initiative and what we’ve been able to do is also be completely onsite as well.”

One enhancement coming down the road is the ability to ingest multiple cameras into one system and then have multiple operators share that single system at the same time. It’s been used in golf successfully and Cash is hopeful it will be used for other sports as well.

“Operators have access to every single camera, and they’re also driven by a data feed that gets them to certain shots as quickly as possible,” he adds.

Player tracking is also evolving, and Hawk-Eye can now track up to 17 points (plans are underway to get to 28 points) on a player’s skeleton as well as the objects around the field.  Hawk-Eye sets cameras up around the stadium and captures a two dimensional image where all the cameras are synched up together. That then allows for a 3D image and define XYZ positioning of players and objects.

“Leagues are looking at how they can leverage this technology in various different ways for player health and safety, from fan engagement standpoint, broadcast enhancement,” and more. “With the 17 points you can get the biomechanics of certain players like how they move or their accelerations of certain joints when doing something like throwing. And it’s not intrusive to the player at all.”

The system can also be a big part of future VR plans.