When Turner Sports gets involved as a national broadcast-rights holder for a major sports property, the network tends to want to make a splash; especially when it comes to pre/postgame studio shows.

With TNT becoming one of the National Hockey League’s new homes in the U.S. beginning tonight, much has been made of what the Atlanta-based media giant can bring to the sport of hockey — most notably, in the studio. Turner has a storied legacy of entertaining programming surrounding live game coverage; look no further than the iconic Inside the NBA. 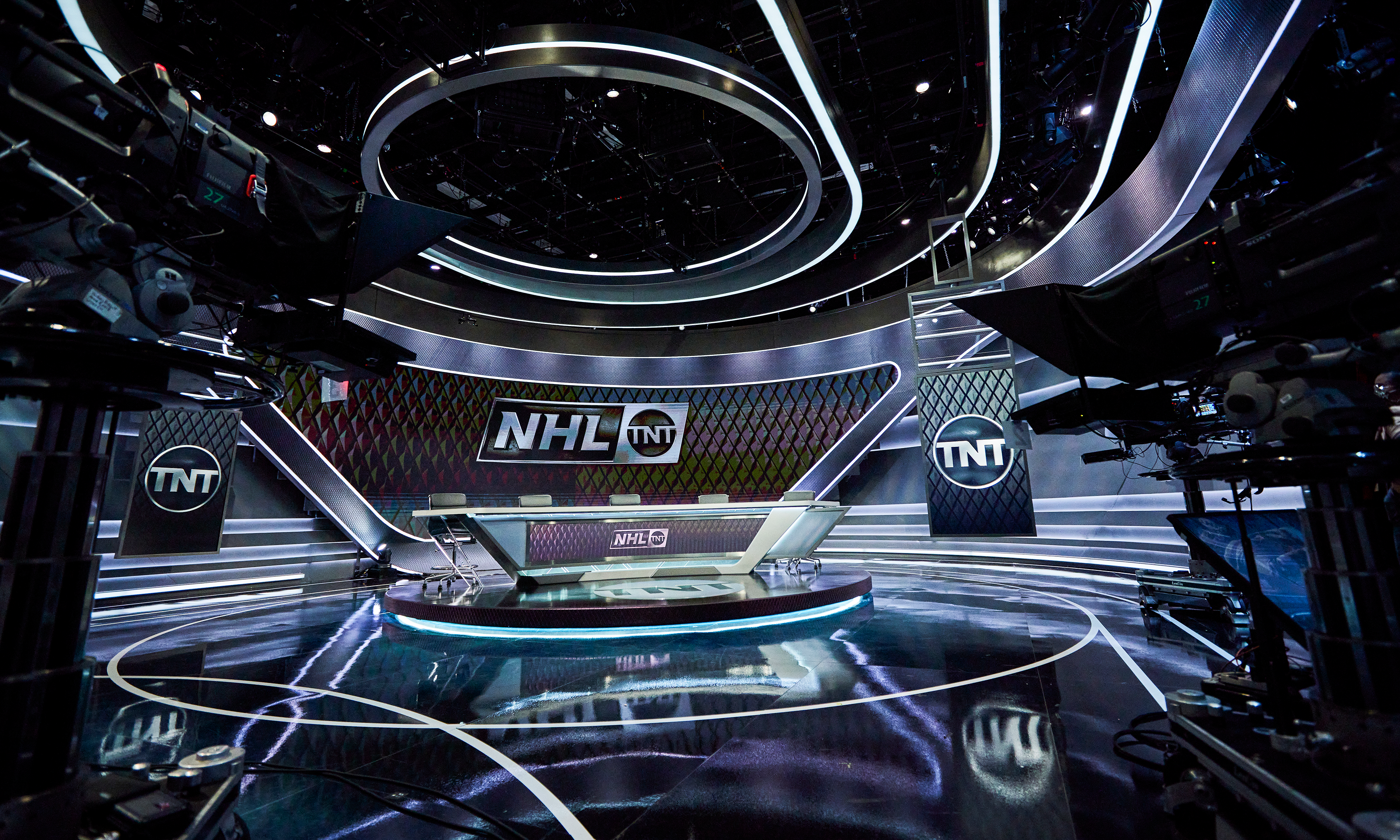 The team behind the scenes of Turner’s NHL coverage believes it has made studio magic yet again, and, no, we’re not just talking about the addition of “The Great One” Wayne Gretzky as an in-studio analyst behind the desk. We’re talking about the desk itself, and everything surrounding it.

With the debut of NHL on TNT Wednesday evening will come the full unveiling of a brand-new, high-tech studio in its Techwood facility in Atlanta. Besides the usual bells and whistles — large and shiny anchor desk, LED screens, a collection of high-end cameras — this studio deploys some firsts in U.S. sports with the use of projection-mapping technology.

Eight 3D projectors from Barco turn the studio space into a 360-degree projection environment that ties directly into and displays graphics designed by the Turner Sports Creative team. According to Turner Sports, the NHL studio is the first of its kind to use all front-projection technology on every surface in the studio.

“I didn’t want to just roll out a standard set with LED walls.,” says Steve Fiorello, VP, coordinating director, Turner Sports. “We did a lot of research around the NHL industry to see what other networks had done. We wanted to be unique. That’s the approach we take.”

With a tight timeline for creating the NHL property (Turner’s deal with the NHL was officially announced in April), Turner Sports turned to a trusted partner in Jack Morton to design the space. The event-marketing agency has also built studios for Turner for the NBA and ELEAGUE.

The new studio features three primary shooting locations: the main anchor desk, a standup location (where throws can be done via an LED screen), and a demo area where analysts can break down plays.

The set features more than 1,000 sq. ft. of LED tiles, totaling more than 400 tiles at 13 ft. high. It includes an area with more than 50 ft. of curved LED tiles with stadium lighting above. The anchor desk also has LED tiles and a screen on its center front. 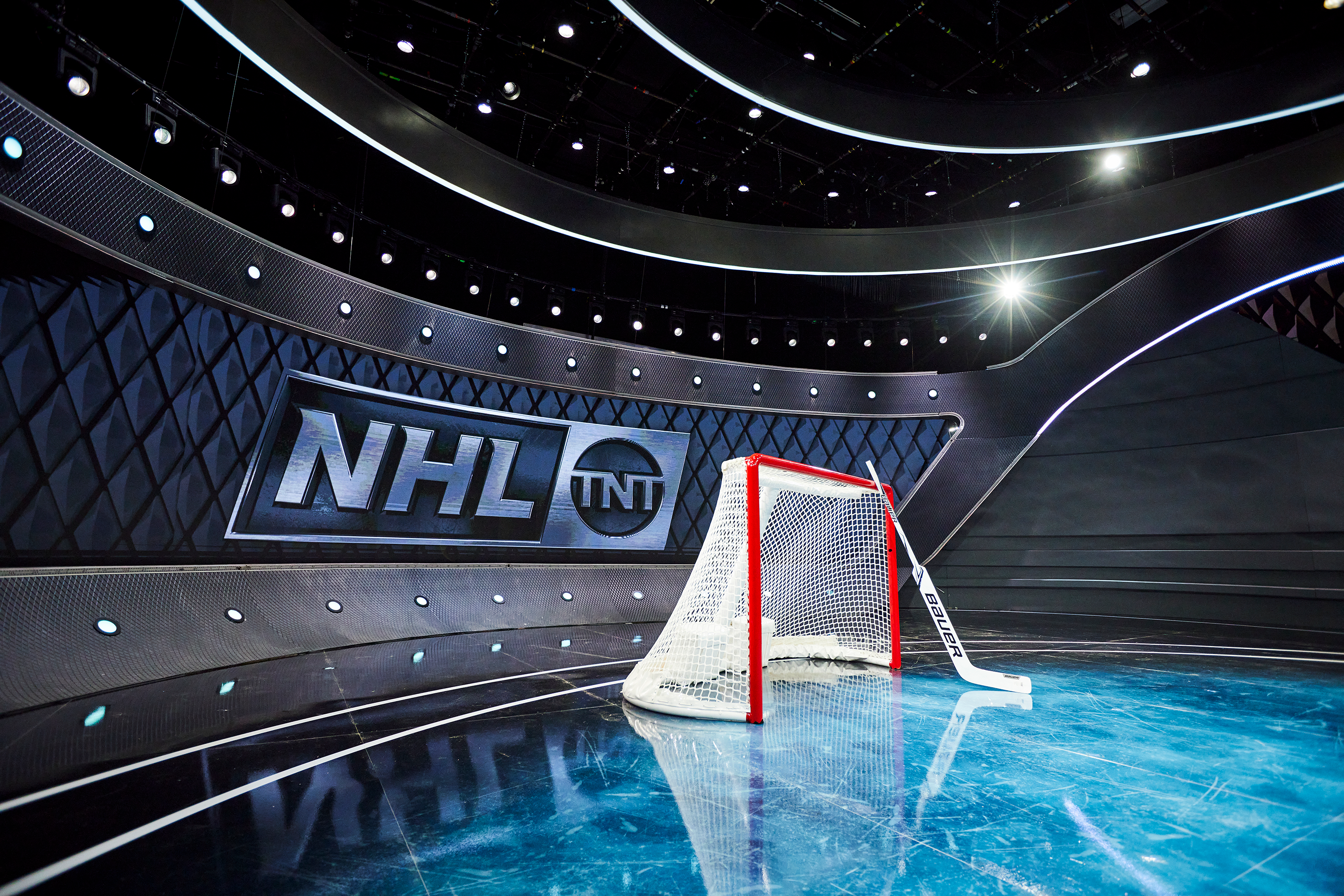 The new NHL on TNT studio set features projection-mapping technology, which uses LED projectors to display graphics and imagery onto hard surfaces of the set. The set was built by Jack Morton Design; projection mapping is handled by Meptik. (Image: Turner Sports/Jeremy Freeman)

It’s the projection mapping that is the star, however, according to Fiorello. Turner worked with creative-services and virtual-production company Meptik (a fellow Atlantan) to provide the technical mapping of the space and the rendering of graphics displayed using projection.

In addition to the eight Barco projectors in the set, Meptik installed eight cameras in the ceiling. Their sole job is to take the geometry of the set and inject it into a 3D program by and map graphics to the three-dimensional world of the set. Meptik uses Unreal Engine and renders the imagery through a Disguise server to tie it all together.

The LED screens and the projection-mapped walls will actually work in symmetry, Fiorello says. For example, if the LED screens are displaying a match-up graphic, the colors of the two teams may spill out on the walls via the projectors. Also, in marketing photos of the new space, the projection mapping creates a cool look of authentic ice on the ground of the demo area to the left of the main anchor desk.

Fiorello was inspired to try projection mapping in the studio when he witnessed Volkswagen’s unveiling of a new electric car. At the debut event, the car drove up a ramp and then, though sitting still, appeared to be driving quickly down a road that was projected onto the scene via a similar style of image projection.

He cites the challenges that arise in trying to pull off this execution in a television-studio environment. Notable among them is lighting: TV studios are covered in light fixtures, and errant light sources can impair the quality of the projection. Using l-shaped mirrors to reflect the projection and a strategic design from Jack Morton, the space is said to be ready to roll beginning Wednesday night.