As professional hockey returns to Seattle, Daktronics, in conjunction with the Oak View Group, has been selected to manufacture and install 224 LED displays at Climate Pledge Arena, the new home of the Seattle Kraken. The installation features 28,175 square feet of digital signage totaling more than 145 million pixels and dual hanging display configurations featuring 2,720 square feet each. No sporting venue in the world will have more LED displays, including 173 displays outside the main seating bowl of the arena.

“Daktronics is elevating our fan experience with the most LED displays ever installed at a sports venue,” says Seattle Kraken SVP, Entertainment Experience & Presentation Jonny Greco. “With all those pixels it is imperative we think of the guest journey from the minute they set foot on the Seattle Center Campus all the way to sitting in their seats at Climate Pledge Arena. Having a world-class sports entertainment facility under a historic roof allows us to find a happy fusion of tradition and technology.” 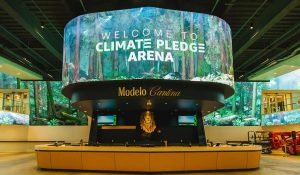 “With 224 displays, audiences will be immersed in the experience from the moment that they arrive and entertained throughout every event held at Climate Pledge Arena,” says Daktronics President and CEO Reece Kurtenbach. “This installation will be an icon for the Pacific Northwest. We’re excited to install the LED technology to engage their audiences and to help usher men’s professional hockey back to the city of Seattle.”

Throughout the concourses and atriums of the arena, 100 LED displays are installed in varying locations and configurations to enhance the fan experience. These displays total 13,175 square feet and feature 2.5- and 3.9-millimeter pixel spacings. This includes a large column wrap, atrium bridge displays, The Climate Pledge Living Wall feature and east concourse picture frame features.

Exterior Displays
Outside of the arena, 51 LED displays totaling 3,830 square feet are installed to communicate with people as they pass by and audiences as they arrive for events. These outdoor plaza displays brand the facility immediately upon arrival and parking displays give direction to help with the flow of traffic. These displays feature 3.9- and 5.9-millimeter pixel spacings.