Maxon is now including Forger with all Maxon One subscriptions with the release of Forger 1.8, an update to the company’s professional-level, digital 3D sculpting application for the iPad. In addition, an updated version of Maxon’s Cinema 4D Lite has been added to the latest release of Adobe After Effect. 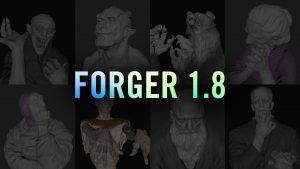 New licensing options include a free version that brings sculpting to all iPad users, and a subscription version that can be purchased independently from the Apple App Store. Maxon One subscribers can simply login to their MyMaxon account for access to Forger included with their subscription. This latest version also features a seamless workflow with Cinema 4D – objects can be imported into C4D to be brought to life, and 3D models in development can be moved back and forth between Cinema 4D and Forger to facilitate a seamless, iterative workflow.

Forger is an elegant and engaging first step into 3D sculpting without the intimidating complexity of typical desktop sculpting apps. Forger features an intuitive multitouch interface, full support for Apple Pencil, and a comprehensive collection of sculpting brushes and tools. Powerful remeshing algorithms as well as masking and layering capabilities make concept- and production-level sculpting on a mobile device a reality.

Forger liberates professional 3D modelers and sculptors from their desktop which enables the artistic freedom of working on a digital sketch pad on the go. For casual users or aspiring new artists, the free version removes the commitment barrier of having to pay for a professional app and allows them to take their first strokes into the world of 3D sculpting and modeling. When artists are ready to remove the limit of three active files or make use of extensive export capability, it’s easy to subscribe on a monthly or annual basis.

Users of the previous version of Forger (now Forger Classic) are entitled to a free one-year subscription to the new Forger. This offer is exclusive to Forger Classic users. Note: owners of Forger Classic can still keep their current license – it will not expire even if they take advantage of the free-year offer.

Based on the company’s award-winning Cinema 4D Release S24, the software is available immediately for download to Adobe Creative Cloud® members. Along with compatibility and workflow enhancements, this latest version includes the Asset Browser that features ready-to-use and animate 3D models, materials and other assets. This latest update symbolizes the ongoing collaboration between Maxon and Adobe to deliver improved integration and performance between Maxon’s powerful 3D application, Cinema 4D, and Adobe After Effects, the industry-standard motion graphics and visual effects software.

Along with compatibility and workflow enhancements, added features in Cinema 4D Lite S24 include the new Asset Browser making it easy for artists to easily browse and obtain 3D models, materials and other assets. A library of assets has been specifically curated and made available to Cinema 4D Lite users. Assets are organized with rich metadata and keywords and are downloaded and cached locally on demand.

The latest release of Cinema 4D Lite can be launched within After Effects and independently as a standalone application. And, since Cinema 4D Lite utilizes Maxon’s new entitlement system users can instantly upgrade to the full commercial version at any time directly from within Cinema 4D.