Plethora of specialty cameras, 100+ microphones cover the field for finale in Canton

At a championship, the conversation around the live game production is typically what wild, new, eye-catching technologies the broadcaster is throwing at the event to make it an exciting and memorable viewing experience.

That’s decidedly not the case with the first championship game of the rebooted United States Football League (USFL), which airs this Sunday on FOX at 7:30 p.m. ET. That’s because since Opening Night, live game coverage of the USFL has been an all-out live sports production research lab on steroids. 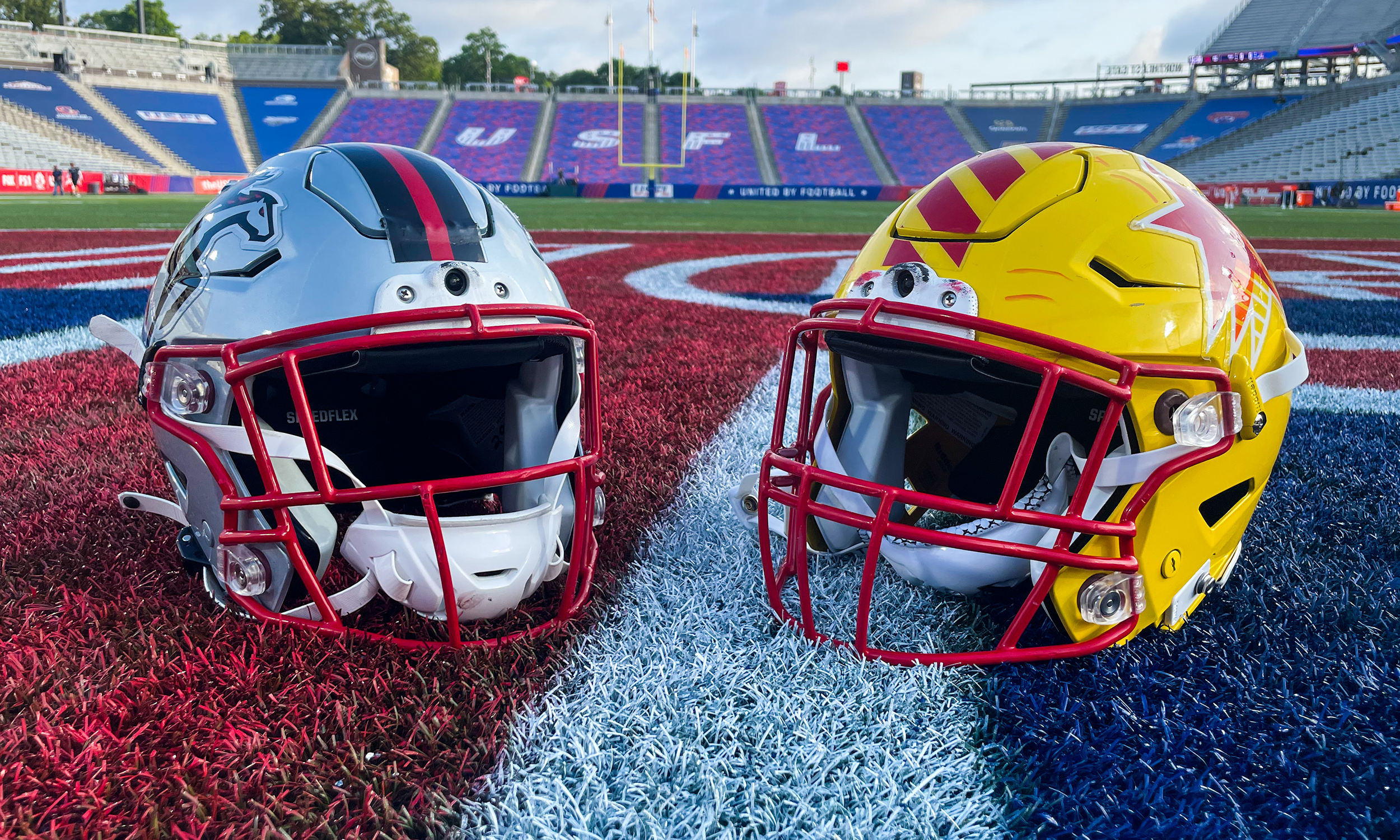 The Birmingham Stallions and Philadelphia Stars will meet in the USFL Championship Game on Sunday (7:30 p.m. ET, FOX) from Tom Benson Hall of Fame Stadium in Canton. Among the camera arsenal are Helmet Cams (pictured) which will be worn by select players on the field. NOTE: The helmets pictured are of the Tampa Bay Bandits (left) and Philadelphia Stars. (Photo Courtesy: FOX Sports)

From headline grabbers like live drones and Helmet Cams to behind-the-scenes work pushing the boundaries in transmission, a joint effort between FOX Sports and NBC Sports has produced a truly unique sports television production and operations experience that will see its first season come to a conclusion this Fourth of July Weekend. It’s also a big onsite effort as a crew of nearly 180 will be onsite for the finale that pits the Birmingham Stallions up against the Philadelphia Stars.

“We are going in with what we’ve had since Day One,” says Brad Cheney, VP, Field Operations and Engineering, FOX Sports. “It really is the culmination of executing everything that we have learned and used. It’s surrealistic because you are able to throw any idea at it. We’ve thrown some things that have made air, not made air. It’s tough to even remember [some things] are there because there’s so much stuff.”

Sunday’s game will see a total of 56 cameras in all shapes and sizes cover the field. That tally includes many notable acquisition tools that have garnered the USFL attention all season long, like a live drone (from Beverly Hills Aerials), two SkyCams, multiple Pylon Cams, multiple hard and handheld super slow-motion cameras, an on-field Steadicam, a Megalodon (FOX’s iteration of the mirrorless camera of a stabilizing rig shooting in shallow depth-of-field), Helmet Cams (embedded within select player helmets), and Ref Cams (affixed to the hat of the umpire in the defensive zone). 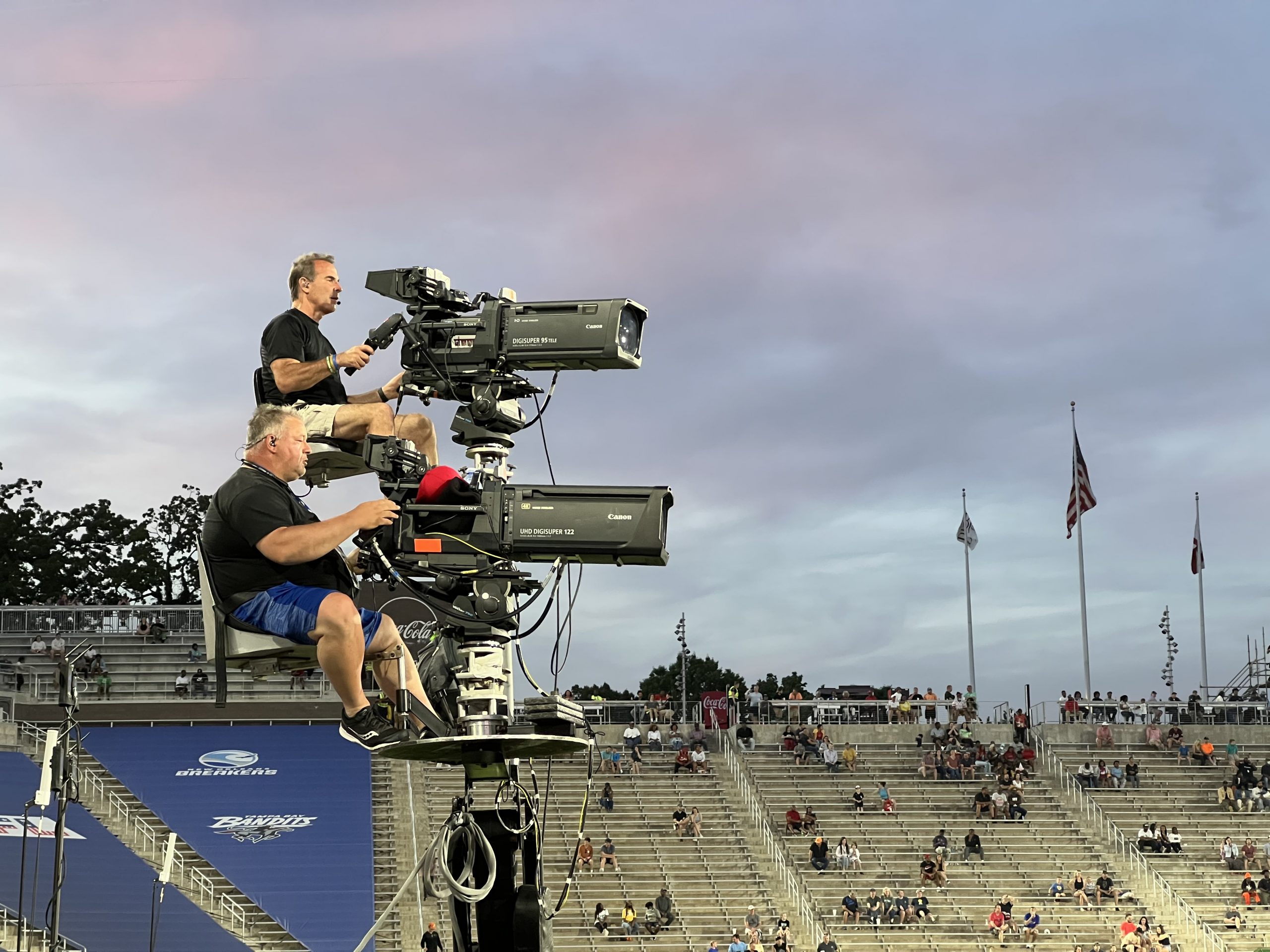 The USFL season has seen both FOX Sports and NBC Sports throw a seemingly endless list of unique acquisition devices at the live game production; some granting access that many major sports leagues that both networks work with on a regular basis might be hesitant to allow.

In addition, Cheney notes, that the environment has allowed for some innovations more opportunities to fail before they succeed — something that might not normally happen on more established sports properties.

“In most cases, you get to try something out for a week or two and if it really doesn’t shine, it gets thrown in the trash bucket,” says Cheney, “because whatever you’re trying to do is so difficult and so costly that you just can’t do it anymore. Whereas on this sport, we’re able to actually get to walk things through a full season.”

Cheney pointed to the live drone as a perfect example of that. While the angles pulled in by the drone garnered plenty of attention from viewers and on social media in Week 1 of the season, it took well into Weeks 3 and 4 for both FOX and NBC crews to really get a feel for where it actually fits best into the show when balanced with all of the other tools. What makes the drone different from, say, the SkyCam or a blimp (which will be in use on Sunday’s championship)? 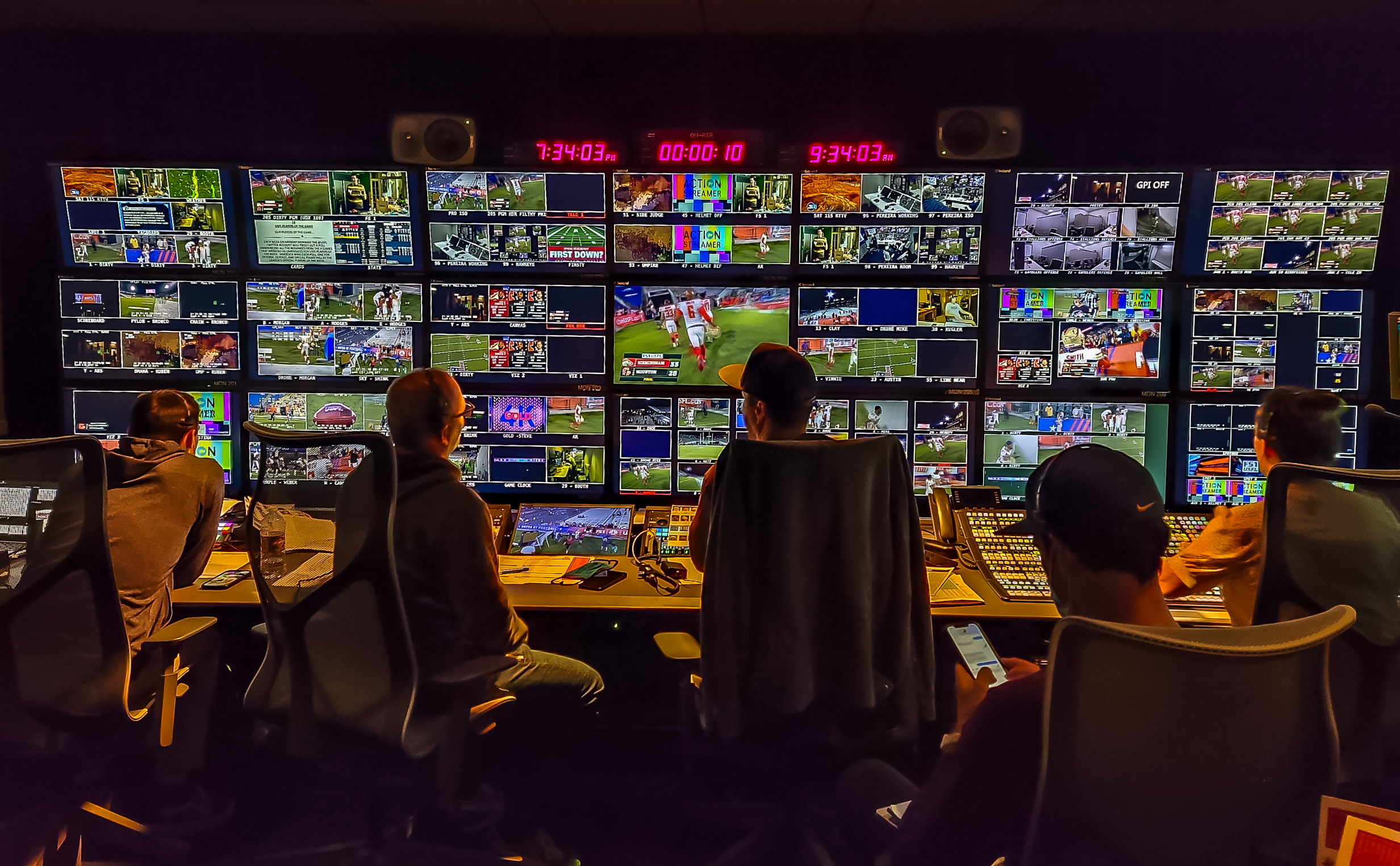 The primary game truck for the USFL Championship on Sunday is Game Creek Video’s Gridiron. At the front bench for Sunday’s game will be producer Mark Teitelman and director Mitch Riggin. (Photo Courtesy: FOX Sports)

It’s a unique challenge for the front bench to balance all of those resources and find the best use for tools like the drone or the Helmet Cam. On Sunday’s game, producer Mark Teitelman and director Mitch Riggin — both of whom regularly work on NFL shows for FOX — will be calling the shots. They will be joined by technical director Lindsay Ploszaj, lead replay op Phil Link, lead graphics op Nick Crawford, lead utility Ben Beal, V1 Darrin Peterson, and EIC (engineer-in-charge) Bryan McKenzie.

For Cheney, while he finds many of the acquisition experiments that the broadcast has rolled out this season to be exciting, it’s the Helmet Cam — which is embedded into the front forehead of the helmets of select players on the field — that has gotten him the most excited.

“When you see a good run or a good interception off a Helmet Cam, it’s spectacular,” he says. “Seeing the speed at which they’re running past people and understanding how somebody could have missed somebody or how they found the lane to run through to the end zone, it’s just mind boggling as you see it. That’s what’s really spectacular. It’s great for the broadcast and it’s even better for digital and for places like Twitter.”

Additionally, the combined field operations teams of Lead Tech Manager Carlos Gonzalez, and Tech Managers Doug Fuchs, Ron McGuggins, Brett Fifield, and Tom Lynch put in week-after-week efforts in Birmingham (where the entirely of the league’s regular season was played) to put together a production plan that truly pushed the envelope.

Following the season-long effort in Birmingham, the USFL has sifted scenes to the home of the Pro Football Hall of Fame and Canton, OH, for its semifinals (which aired last weekend) and Sunday’s championship game.

With that move came a more onsite set up that includes a production compound anchored by Game Creek Video’s Gridiron A and B, which is the same remote production facility that FOX uses for its’ Big Noon Kickoff college football game each week. The fully-IP-based truck is also joined in Canton by GCV Edit.

CP Communications has also come with its full size RF8 unit to support all of the encoding and transmission, as well as all audio transmission workflows.

The intensely onsite nature of this weekend’s championship game is actually a bit of a divergence for the normal plan throughout the regular season that actually saw FOX and NBC really extend their capabilities of their REMI/Home Run/At-Home production capabilities.

FOX Sports’ Executive Director, Transmission Operations Leigh Behunin and NBC Sports’ VP, Transmission Chris Connelly worked together to send a multitude of feeds, including ISOs of virtually every camera resource back to each other’s respective facilities in Los Angeles and Stamford, CT.

“These are two massive [deliveries] that go back to two network centers,” says Cheney, “and when you think about the sharing and security that needs to exist, we made all that stuff work in a very busy time period for both of us. The NBC side was busier than ours as we went to launch this league, for them, coming out of the Olympics and the Super Bowl.”

Access Through Audio
Another major star of the first season of the USFL was the audio side. For Sunday’s game, more than 100 microphones will strategically positioned across the field, in the booth, in the stands, and in other key positions to further the effort that has made the mix of the USFL a truly unique audio project.

“It’s one thing to say you’ve miked up 70+ things on the field that you’ve never miked up before but to try to use them live is just mind bending,” says Cheney. “If you equate it to what we do in NASCAR with all of the radios: that stuff is all being recorded but you never see somebody’s mouth move. You can edit it and it doesn’t matter. You can play back the audio and just shoot the car driving around and it makes sense. You can’t do that in football. We can see their mouths and we can hear the conversation. There’s a lot of work that goes into syncing things up and making sure that they’re right.”

Extra cameras were actually added to support the enhanced audio efforts. Handheld cameras were positioned on the sideline of each 50-yard line with the operators shooting ISOs throughout the game. They’d be asked to stick on certain people for an extended period if the audio they were getting from them was good. ISO producers for those camera ops — who were working back in LA and Stamford — could speak to those ISO operators over comms and direct them on to which player or coach the audio side might want to focus on.

More microphones on the field also meant more access to the play to play action of the game for veteran A1 Michael Del Tufo and submixers Greg Briggs (players) and Steve Goldfein (effects). Even the crashing of the offensive and defensive lines popped more than in most traditional football broadcasts.

“Having that,” he continues, “and coupling that with hearing [the quarterback] call plays. [Our on-air talent] understands those code words and they are talking about those things and you’re hearing what the defense is doing as it starts to line up and react to that. There’s a lot more strategy in the story and I think that it’s really amazing for younger players watching to understand what’s going on and understand how it’s happening in real time in professional football.”

Uncharted Territory: A Season Two
With this weekend’s championship well in sight, the USFL, FOX, and NBC all got a shot in the arm earlier this week when Fox Sports Executive Producer Eric Shanks told the Sports Business Journal that the league would, in fact, return next spring for a second season in 2023. 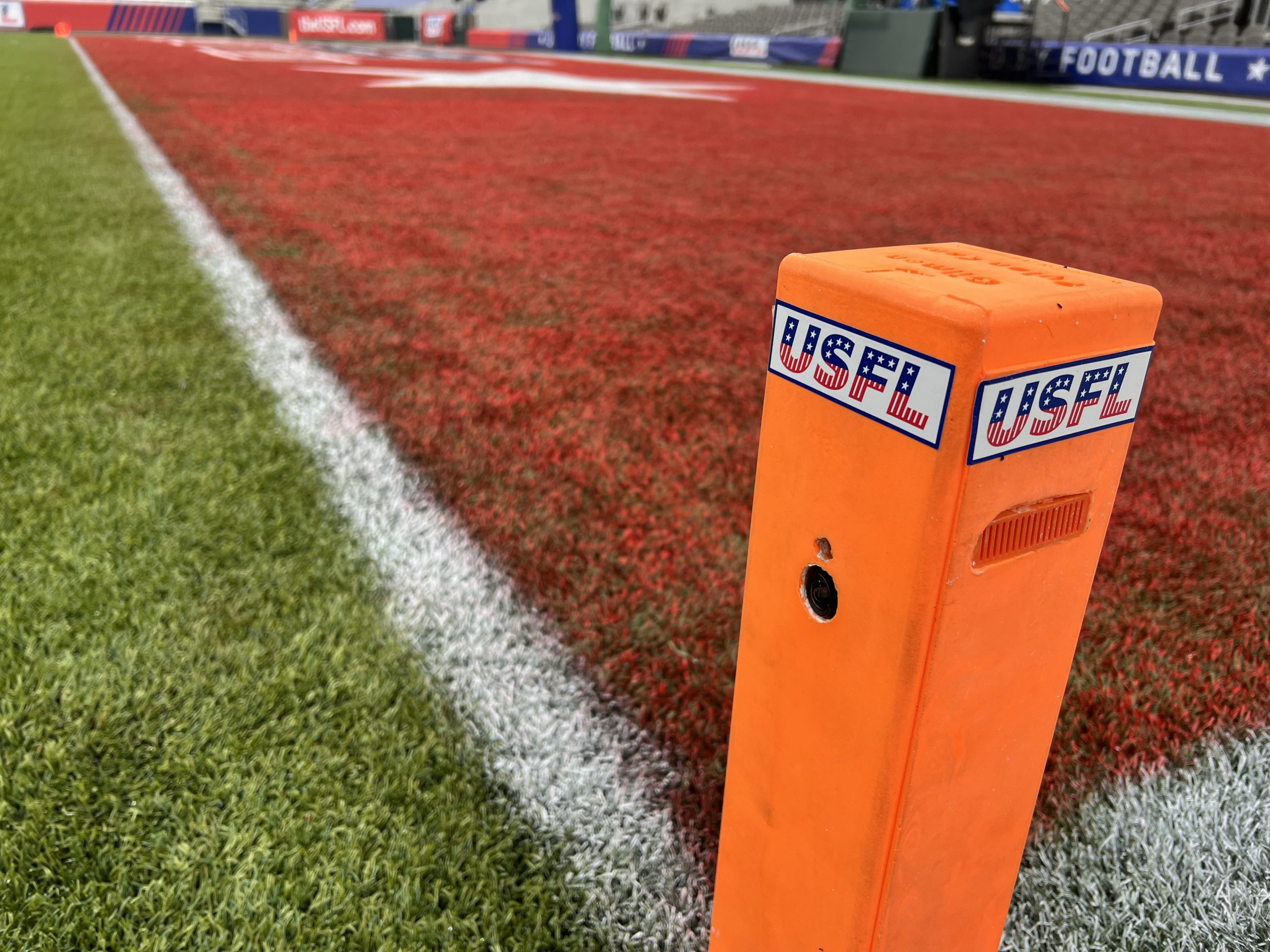 PylonCams are among the 56 camera feeds available to the broadcast on Sunday’s USFL Championship Game. (Photo Courtesy: FOX Sports)

While the league was unveiled with a commitment for three seasons, this remains uncharted territory for spring football in the 21st Century after both the Alliance for American Football (2019) and the XFL (in 2001 and 2020) failed to make it beyond an inaugural season. The USFL will have added competition next spring as a third iteration of the XFL is expected to debut.

The impact of the USFL’s television productions will stretch far beyond spring football, as FOX and NBC will utilize learnings on other major properties including college football and, yes, even the NFL. However, with the reassurance of a second season, a robust team of production and operation professionals from both FOX and NBC can take satisfaction that their work is contributing to the success of something entirely different: a burgeoning operation in the USFL.

“There’s some pretty special things that came out of the first season of the USFL,” says Cheney. “It was a great experience to have one crew across the board from management down to the techs [from two networks] that really worked together. Nothing was ever hidden from one group to the other including all the player mic requests every week. Both sides’ producers saw everything that was going on. They were helping each other out. Those things were a super collaborative process throughout the season.

“We’re very thankful that we did our side of the bargain,” he continues, “and produced some really amazing television. And we’re going to come back and get to do it again for season two.”

The Birmingham Stallions and Philadelphia Stars meet in the USFL Championship Game on Sunday at 7:30 p.m. ET on FOX. The game is also available of the FOX Sports App.

The production of the USFL Championship Game will be done in a 1080p HDR HLG 2020 format but will be upscaled to 4K for streaming to the FOX Sports app and other providers including DIRECTV, Dish, Comcast, Verizon, Optimum, YouTube TV, and FuboTV.