The NBA, its broadcast partners, and an army of technology vendors have convened in Las Vegas this week for the annual innovation-fest that is NBA Summer League. The league, ESPN, and Turner Sports are looking to leverage the annual off-season event to demonstrate and experiment with bleeding-edge production technologies at the Thomas & Mack Center and Cox Pavilion.

“The cooperation and participation continue to grow here at Summer League,” says Barney Carlton, director, broadcast planning and strategy, NBA, “across not only our broadcast group but also with our basketball-operations group, both of our media partners, our regional partners, and other [departments] around the league. This year, we have an even larger footprint and are testing out more key initiatives than ever. Summer League has really been institutionalized as the opportunity for all of us to bring vendors together and further the coverage of basketball.”

For in-game coverage, the league is exploring new ways to present the NBA Replay Center review process within the broadcast. During the 2020 NBA bubble season, the league introduced a court-side camera and microphone for the referees to announce the call once it had been determined by the NBA Replay Center. That has continued in the ensuing seasons, and now the league is working with ESPN and Turner Sports to determine the optimal camera, lens, and microphone for these moments.

“We are experimenting with shooting the referee from an up camera, which provides a really interesting look,” says Carlton. “We’ve experimented with using the reverse camera with some of the different RSNs during the regular season and with our broadcast partners during the playoffs, but the difference here at Summer League is that we’re able to incorporate the referee-operations department into the conversation.

“We’re working with the referee-operations group and the network partners to figure out the best way to disseminate that information once the call has been made,” he continues. “We are trying out several different cameras, lenses, and microphones in an effort to ensure that the information is conveyed as quickly as possible and with the best look possible. This is a fantastic opportunity where we have so many games back to back all in one location, so we’re able to try out several different technologies.” 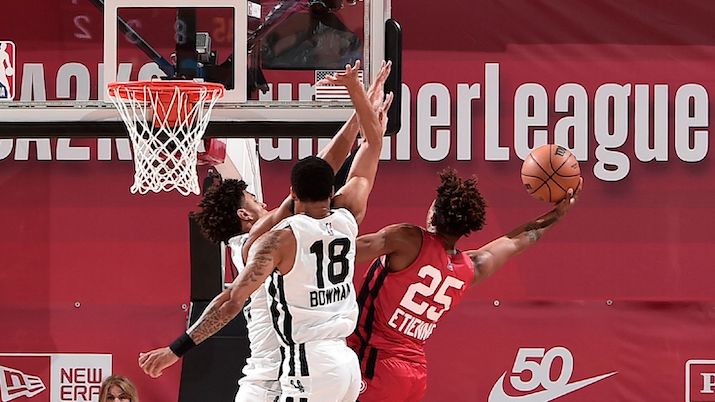 As it does at all 29 arenas, the league is using its HSAN (High Speed Arena Network) to provide connectivity from Vegas to the NBA Replay Center in Secaucus, NJ. To support replay operations and the test being conducted in Vegas, the league’s engineering team has stood up 24 outbound and six inbound transmission paths.

“As the internet has become more stable as a transport mechanism,” says Dave Barry, VP, broadcast operations and engineering, NBA, “we’re very interested in seeing how we can deploy it more for backup transmission paths.

The NBA has been a pioneer in creation of alternative game presentations, rolling out a variety of streams on NBA League Pass and the NBA App. These include NBABet Stream, Sideline Stream, and Influencer Stream, as well as the Mobile View presentation. This year in Vegas, the NBA is looking to grow its roster of on-air talent for the Influencer Stream, which features influencers and media personalities casually calling the game while interacting with fans on social media.

“The testing that we’re conducting this summer isn’t necessarily about the technology,” notes Carlton. “It’s more about expanding our roster of talent and seeing what works best in terms of format. We are looking to expand alternate streaming going into the next regular season, and influencer broadcasts on NBA League Pass are a big part of that.”

“When the pandemic hit,” Barry says, “we took a lot of the lessons we learned at our innovation lab at Summer League and brought those into our regular-season and playoffs coverage. Now we have accelerated those experiments and innovations: you can do something at Summer League and bring it to regular-season basketball in a matter of months. We’re able to innovate and bring things to market at a much quicker pace.”

Turner Sports Returns for Year 2 of Testing at Summer League

For the second year in a row, Turner Sports is leveraging NBA Summer League as a testing ground for production technology not only for its NBA on TNT coverage but also for its other sports properties.

“Of course, we’re looking at products that will enhance and improve our NBA coverage,” says Lee Estroff, director, technical operations, Turner Sports, “but we’re also looking at technologies that will benefit our MLB, NHL, and U.S. Soccer packages, as well as Bleacher Report and some of our digital efforts. Last year [at Summer League], when we had just gotten the NHL [rights], this was a great place to test out a lot of technology for hockey [coverage]. Now, with the addition of U.S. Soccer, we’ll be looking at a lot of technology that can be used as part of our soccer package.” 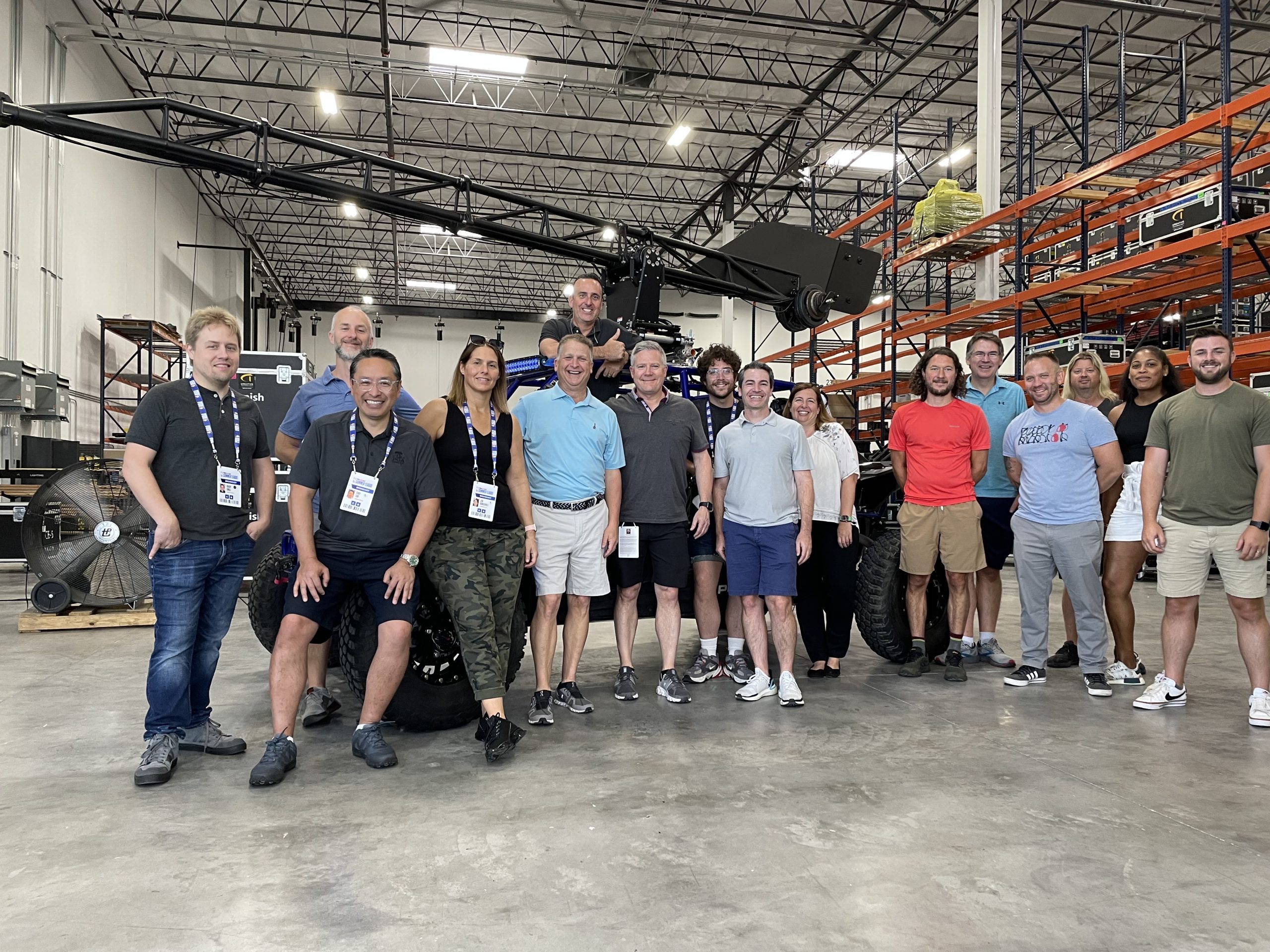 The Turner Sports team on hand in Las Vegas

His team is looking at everything from high-frame-rate and shallow–depth-of-field cameras to robotics and AI-driven technologies, as well as at new lenses, graphics tools, and microphone/audio solutions. Taking part in the Turner Sports demos are technology vendors Advanced Image Robotics, Canon, CP Communications, Dolby Atmos, DreamChip, Fletcher, JibTek, Mobile Viewpoint, Panasonic, Q5X, Riedel Communications, Ross Video, Shure Audio, Sony Hawkeye, and Vizrt. Each vendor gets a one- to three-hour timeslot during Turner’s three days of testing.

“Our goal is to create a learning environment where we can proactively seek out technologies,” explains Estroff. “It’s not often that we can get in front of so many of our vendors all at once. Everybody is excited to have the opportunity to see not only the technologies [being demonstrated] here but also what our vendors are developing down the road. We will walk out of here at the end of the three days with a whole bunch of new ideas, and that’s very exciting.” 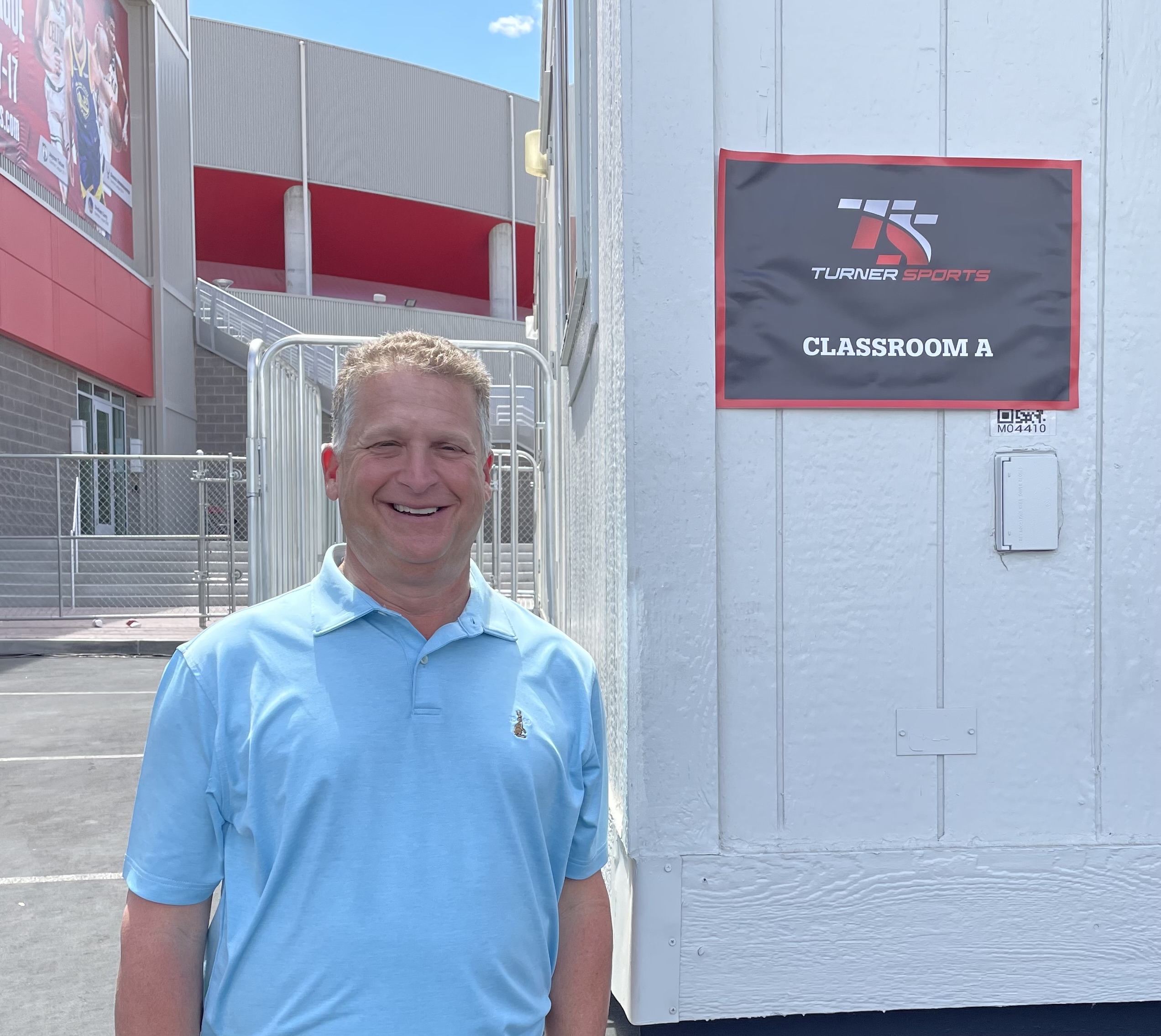 “We have this great collection of production talent here who would not normally get this kind of opportunity,” says Estroff. “Most of us can’t go to NAB because it’s during NBA Playoffs, so this is a great chance to see all that technology in a more intimate environment.”