Waves’ arsenal of plugins integrates smoothly with Carr’s Avid VENUE S6L board, allowing Carr to run the plugins as an integral part of his system. “Having all my Waves plugins accessible from the console in such a brilliantly simple way, enables me to work as I would in a studio,” he says. “It helps me take my live mix to a higher level of creative artistry, without needing racks upon racks of outboard. With the low latency of the Waves live system, and numerous instances of whichever plugin I need, it often feels there is no limit to what I can do to achieve certain sounds and effects.” 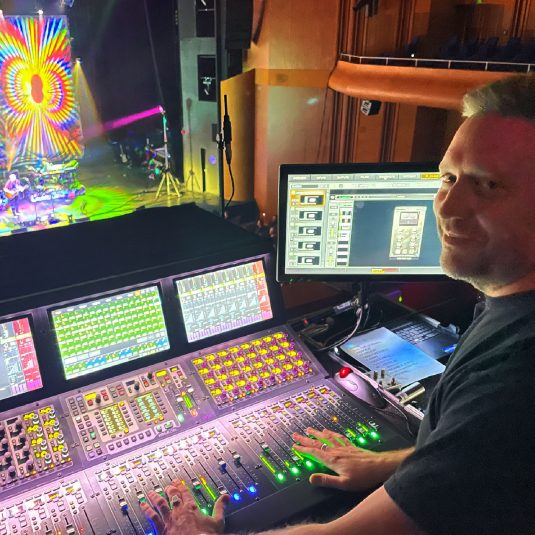 “Using Waves is incredibly useful when working on a live mix in collaboration with the artist,” he adds. “Most artists use Waves in the studio when writing and producing, so it’s very reassuring for them to see those same plugins being used in live sound. Sometimes, we even use the exact same presets.”

“I’m using the Avid S6L 24D console with one Stage 64 Rack. The S6L has a built-in WSG-HD Waves SoundGrid card, which interfaces directly with two Waves Extreme SoundGrid Servers. I send a stereo mix via AES to a Lake LM44 to drive the PA that deals with system EQ, delay and levels. That’s it – very simple, no outboard. Because of the way I like to work – a compact, streamlined FOH system with an Avid console – having Waves plugins available and integrated is absolutely essential.”

“As in most productions, there were unique challenges to overcome when building my mix for this show. The mix is very dynamic with punch and energy, yet it needs to be subtle when required. In songs like Pink Floyd’s ‘Echoes,’ which Nick and his band are playing on this tour, this entire dynamic range is required within one song. Moreover, the stage has an old school feel with loud vintage amps, and without any isolation between the musicians. So, my first big challenge was to reduce unwanted bleed into the vocal mics. Here, the expander option in the Waves SSL G-Channel is invaluable. This plugin is a great model of a classic, and I use it on every drum channel for EQ, dynamics and tone. The compressor’s auto makeup gain is simply a must-have for me when mixing punchy, crystal clear drums. I’ve also experimented with the Waves Primary Source Expander (PSE) to prevent mic bleed. Both plugins do the job brilliantly. With a bit of fine-tuning, I can automatically close open mics all around the stage when not in use, giving me a very tight close-miking-sounding mix even in reverberant rooms.”

“Another issue is the variety of guitars used in this show. The guitar players switch guitars frequently, so tone and levels vary from song to song. Rather than interfere with the guitarists’ tone, I generally leave the EQs flat, with just some gentle high passing; instead, I use compression to control the feel of each instrument. Here, I use the H-Comp Hybrid Compressor on the guitar channels, to maintain a constant level from instrument to instrument. H-Comp is fantastically simple to use, though its simplicity is deceiving – it has so much variety. I love its Dry/Wet mix function, which I use for ALL of my parallel compression now.”

“I also use the C6 Multiband Compressor on the sub group to control any unruly frequencies, and dramatic level changes are controlled using snapshot settings. C6 is again a classic, and I rarely build a mix without it. In addition to using it as a general multiband compressor, I like to use its side chain function to help my kick drum and bass guitar play together nicely down in the low and sub regions of the mix.”

“Lastly, all my mixes are put together with these three plugins: the Waves API 550B EQ is essential for my subgroups; it’s musical and sweet and gives me what I need every time. The IR-Live Convolution Reverb is absolutely brilliant because I can import my own impulse responses. And my go-to delay for any situation is the Waves H-Delay Hybrid Delay.”

“There are so many benefits to using Waves plugins in this way,” Carr says. “First, and most important, the Waves software integrates seamlessly with the S6L console. The plugins run within the Avid onboard software and can be viewed, accessed and written into snapshots, all from the console’s plugin rack and snapshot screens. This is essential for my preferable workflow. It keeps my processing chain simple, cable-free, and all in one place. Because Waves plugins are so good, I can avoid using outboard altogether, reducing in/out digital conversion paths, latency, and potential cable failure, not to mention fewer racks and boxes in often-cramped FOH spaces.”

“The snapshot functionality is really important,” Carr notes. “Each plugin instance can be easily assigned to any snapshot I want and edited at the touch of a button like any other parameter on the console. When selected, a plugin’s user interface automatically maps to the encoders on the console surface without any fuss. This is just awesome for hands-on mixing, which can otherwise prove tricky with plugins when using a mouse or touch screen. It’s no fun spinning in dub delays with a mouse! The encoder mapping is essential, and on this system it’s very elegant.”

“This show goes into venues of all sizes, indoor and out,” Carr summarizes. “You never know what you’re walking into, no matter how well prepared you are – which is why a compact yet powerful system is essential. This system is exactly that: it allows me to get the precise and creative result that I need in every show.”

Live From MLB at Field of Dreams: The Game May Look Old, But It Sounds NewCrossFit Games 2022: Networked Sound Is Everywhere It’s Needed