The Sports Broadcasting Hall of Fame is proud to announce the Class of 2022, honoring nine legendary professionals who have made an indelible mark on the sports-TV and -media industry.

The 2022 Sports Broadcasting Hall of Fame Induction Ceremony will be held on Tuesday, December 13, at the New York Hilton Midtown in New York City. For complete details and to purchase tickets, please CLICK HERE. 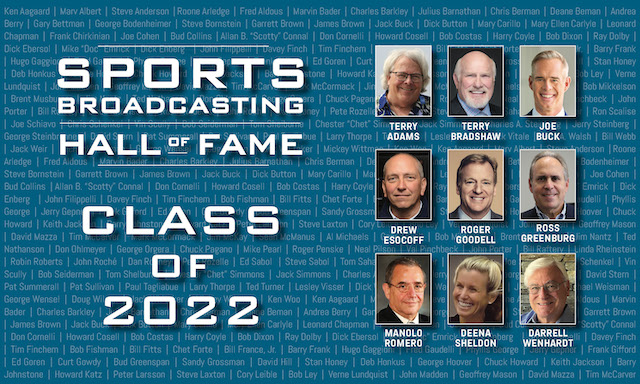 “Once again, the quality of inductees, their collective accomplishments, and the ways they have made the sports broadcast industry better and richer makes all of our inductees worthy of celebration,” says Sports Broadcasting Hall of Fame Chairman Ken Aagaard. “Thanks also to the Sports Broadcasting Hall of Fame voting committee — with more than 100 members — for their time and energy in selecting this year’s class.”

All ticket sales will be donated to the SVG Sports Broadcasting Fund, which helps those in the sports-broadcasting industry who find themselves in a difficult financial situation due to illness, injury, or disaster. For more information on the Sports Broadcasting Hall of Fame, visit http://www.sportsbroadcastinghalloffame.org/

Introducing the Sports Broadcasting Hall of Fame Class of 2022

Adams has been involved with remote and sports production since 1973, but it is his work on the Olympic Games for NBC since 2000 that has put him at the center of key innovations and technical advances for big-time sports events. His efforts allowed NBC Olympics production efforts to become larger and more efficient while also embracing new technologies like HD, 4K and HDR, Dolby Atmos, remote workflows, IP, and more.

Bradshaw segued from playing in the NFL to broadcasting as a guest commentator for CBS Sports’ NFC postseason broadcasts (1980-82) before joining CBS Sports as an NFL game analyst in 1984. Beginning in 1990, he spent four seasons as a studio analyst on The NFL Today before joining Fox NFL Sunday and becoming a primary force in making the show America’s most-watched NFL pregame program. His work on Fox NFL Sunday earned him Sports Emmy Awards in the Outstanding Sports Personality/Analyst category in 1999, 2001 and 2009, and he was named TV Guide’s favorite sportscaster in 1999.

Joe Buck
Now the play-by-play voice of Monday Night Football for ESPN, Buck’s career has been highlighted by calling NFL games since 1994 (including six Super Bowls), calling 24 World Series, 22 MLB All-Star games, five of golf’s U.S. Opens, and having hosted his own studio shows. Buck has been named the National Sports Media Association’s National Sportscaster of the Year four times, including three years in a row (2002-04, 2006).

Drew Esocoff
Esocoff, the director of NBC’s Sunday Night Football, begins his 23rd season as the director for an NFL primetime game, and his 17th season directing SNF (he spent six years as director of MNF). A 19-time Emmy Award winner, Esocoff has directed six Super Bowls and has also directed NBC Sports’ Triple Crown horse racing coverage, including the two historic Triple Crown runs in 2015 and 2018. In the 1980s, Esocoff directed many of ESPN’s marquee events, including college basketball and football, hockey, and boxing. He also served as the director for SportsCenter and Baseball Tonight before joining ABC Sports in 1990 where he directed MNF and coverage of the NBA on ABC, including the NBA Finals.

Roger Goodell
Since becoming Commissioner of the National Football League in 2006, Goodell has helped the NFL become the most important sports media entity in the nation and arguably the world. His numerous accomplishments include building solid relationships with media partners in both the traditional broadcast and digital space; keeping the league’s rights deals on the ascent; launching a new NFL West production facility; and continuing to drive international growth.

Ross Greenburg
Greenburg redefined and reinvigorated the genre of sports documentaries during a 33-year career at HBO. He served as VP and Executive Producer of HBO Sports from 1985-1990, SVP and Executive Producer from 1990-2000, and then President of HBO Sports from 2000-2011. Greenburg has won more than 100 major television sports awards including eight Peabody Awards, 56 Sports Emmys, 21 Cable ACE awards, 12 Cine Golden Eagles Awards, and five Monitor Awards from the Video Tape Production Association.

Manolo Romero
Romero helped define the concept of a host broadcaster and Olympic Broadcast Services (OBS) during a career that spanned more than 20 years and 10 Olympic Games. He began his Olympic career in 1968 at the Mexico City Games and in the 1992 Barcelona Games headed up broadcast operations for the first time. Between then and the London Games of 2012, he would help broadcasters around the world deliver high-quality, cutting-edge coverage of the Olympics.

Darrell Wenhardt
A 50-year veteran of video production and TV broadcasting, Wenhardt has designed and managed the installation of numerous facilities for events like the Olympic Games; World Cup; Goodwill Games; America’s Cup; NFL Network; MLB Network; and the new PGA Tour Digital Media Center, which will open in 2025. An understanding of technical workflows and how to apply them to new facilities helped improve the quality of sports production in countless ways.

The Sports Broadcasting Hall of Fame Ceremony will be held on Tuesday, December 13, at the New York Hilton Midtown, beginning with a cocktail reception at 5:00 p.m. followed by the ceremony at 6:30. Tables and individual tickets can be purchased by contacting Carrie Bowden via email at carrie@sportsvideo.org.

To become a sponsor of the Sports Broadcasting Hall of Fame ceremony, please contact Rob Payne at 212-481-8131 or rob@sportsvideo.org, or Andrew Gabel at 646-998-4554 or agabel@sportsvideo.org.