The agreement brings all 65 Copa del Rey matches each season exclusively to ESPN+, in both English and Spanish. All matches will be available in English, with more than 30 matches per season streaming in Spanish as well. 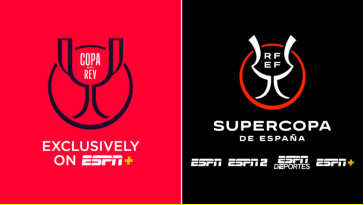 “Copa del Rey and Spanish Super Cup, together with LaLiga, are the three jewels of Spanish soccer,” said Sonia Gomez, ESPN senior director for programming and acquisitions. “Having these three premier properties cements ESPN+ as the home for Spanish soccer in the U.S. and reinforces our position as the country’s leading media destination for soccer fans.”

Organized by the Royal Spanish Football Federation, Copa del Rey is Spain’s annual knockout soccer competition and one of the top domestic cup championships in the world. Founded in 1903, it is one of the longest-running soccer cup competitions. Last season 126 clubs participated, including all 20 LaLiga clubs. Real Betis are the reigning champions. FC Barcelona is the most successful club in the competition with 31 trophies.

Supercopa de España is an annual super cup tournament launched by the Spanish Football Federation in 1982. The event debuted as a two-team competition and currently features four teams – winners and runners-up from the previous LaLiga and Copa del Rey seasons. FC Barcelona’s 12 Supercopa de España titles lead all clubs, and reigning champion Real Madrid is a close second with 11 titles. Since its launch, the competition has featured some of the best ElClasico – Real Madrid vs. FC Barcelona – matches, including last season’s Real Madrid 3-2 victory over FC Barcelona in the January 2022 semifinal at King Fahd Stadium in Riyadh, Saudi Arabia.