PPA Summer Championship will air this weekend on CBS Sports

The Riviera Country Club in Los Angeles is no stranger to big events, hosting three U.S. Open golf championships in the past and, scheduled for 2026, the Women’s U.S. Open. This weekend, its grounds will add another championship: the Pro Pickleball Association (PPA) Tour Skechers Invitational Summer Championship, to be produced by Tennis Channel and broadcast on CBS Sports on Saturday and Sunday afternoon.

“The sport is the fastest-growing sport in the country,” says Bob Whyley, SVP, production/executive producer, Tennis Channel, “and it’s a sport that we’re excited about. Tennis will always be the main sport for our network: tennis is an unyielding beast that fills up our windows. But we do still have live windows available, and we think the viewers out there love pickleball.”

Pickleball events have allowed the Tennis Channel production team to continue to refine its REMI operations, and the diverse 10-Gbps Cisco Meraki circuits between the Riviera and the Tennis Channel Expo facility in Santa Monica, CA, will ensure that all signals are delivered at top quality. 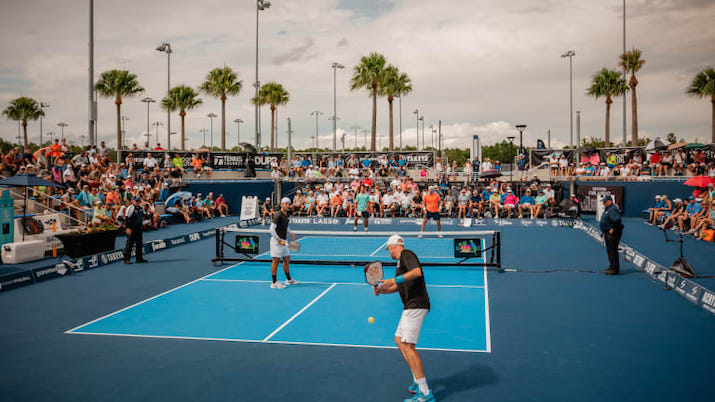 Pickleball is the fastest-growing sport in the U.S., and Tennis Channel is looking to grow the sport as it produces coverage for CBS Sports this weekend.

“We have the opportunity to do things a little bit different with pickleball and experiment a little bit more because we have a blank slate,” says Whyley. “And, with REMI, we’re able to put on an amazing production at a cost that is a lot less.”

The onsite presence will include a small trailer manned by two engineers, one for audio and one for video. The main camera will be a jib at the equivalent of the 50-yard line, and that camera will be manned.

“There is also a utility, a jib operator, and a courtside reporter, but that’s it,” notes Whyley. “Everything else is going to be done back at Expo, where we also have a beautiful studio that we will insert into the coverage. The output from our production-control room in Santa Monica will go right to CBS Sports.” Arctek Purple is at the Santa Monica facility to transmit the shows to CBS via C-band satellite.

In addition, two Fletcher technicians will manage Fletcher’s Trace system, which uses LiDAR to follow the players and the ball and, in turn, automate camera coverage from Cameras 3 and 4.

“Fletcher has done this for years in tennis and have been adjusting it to pickleball,” says Whyley. “During the PPA Championships in San Clemente[, CA], they got about 30 hours under their belt, and all that information was used to tweak the system for the CBS show.”

A reverse-angle camera opposite the 50-yard camera will give a different look to replays. A far-side slash camera will be controlled remotely by an operator who will be at Tennis Channel’s Expo center.

A goal for the team working remotely is to keep the control-room atmosphere light, Whyley says. “We want people to enjoy themselves and not feel too stressed or intense. And the REMI solution that our Head of Operations Bruno Brunelle has designed works almost flawlessly. It’s amazing that there are no latency issues, and there’s a comfort level of working in the same control room every day.”

A Quick Study in Pickleball Production

Pickleball definitely moves at a faster pace than tennis, and that speed requires a different production philosophy.

“One of the things I recognized right away is that you can’t cover pickleball like you do tennis, where you have the end-zone camera,” Whyley explains. “That doesn’t work for pickleball. The court is a little bit smaller, but the way they play is much different. So we use a jib camera with a wide-angle–camera chip to cover the entire court. It allows us to get the right depth and height to be right there on the action and show the speed, skills, and fast hands of the players. In tennis, you use the low-angle slash to show the speed and beauty of the sport; pickleball is made for the 50-yard-line camera.”

One challenge in coverage is the speed of the game. both during rallies and also between serves.

“It’s not too dissimilar from basketball as opposed to live tennis because, once the point is over, they get right back and serve,” says Whyley. “In tennis, it can be 20 seconds before a serve so it’s like baseball, where you wait for a pitch. So we create [replay] packages for between games.”

Having pickleball on CBS Sports both Saturday and Sunday is an important step in exposing the sport to a new audience, Whyley says.

“CBS is an amazing brand ambassador and to be able to put a new sport over the air like we’re going to do is exciting for the PPA,” he adds. “And it’s exciting for us at the Tennis Channel. We believe in this sport, and we think we can capture the hearts and minds of people who are just flipping around and see something really different. We’re excited to tell the world what pickleball is, how it works, the rules, and help grow the sport.”

As for tennis itself? Tennis Channel is in full REMI mode covering the National Bank Open in Canada with a studio desk that also hits all the ATP Masters 1000 and major tennis events around the world. And leading up to the US Open at the end of the month are several tournaments across North America.

“Next week, we’ll be in Cincinnati [for the Western and Southern Open],” Whyley notes. “That’s a big REMI for us because all of our talent will be onsite calling the matches. We’ll produce from Santa Monica and also have TC Live from Santa Monica. After that, it’s off to Winston-Salem[, NC], and then we’ll most likely be producing a live two-hour pregame show around the US Open tennis. We’ll also have wall-to-wall pickleball coverage from Cincinnati during the finals weekend of the U.S. Open.”