With the launch of the PBR Team Series last month, an entirely new five-on-five bull-riding format has changed the face of the sport. And with that new format comes a brand-new look for both the broadcast and the in-venue show — complete with a new state-of-the art in-arena experience, as well as new cameras, graphics, and audio elements for the broadcast. 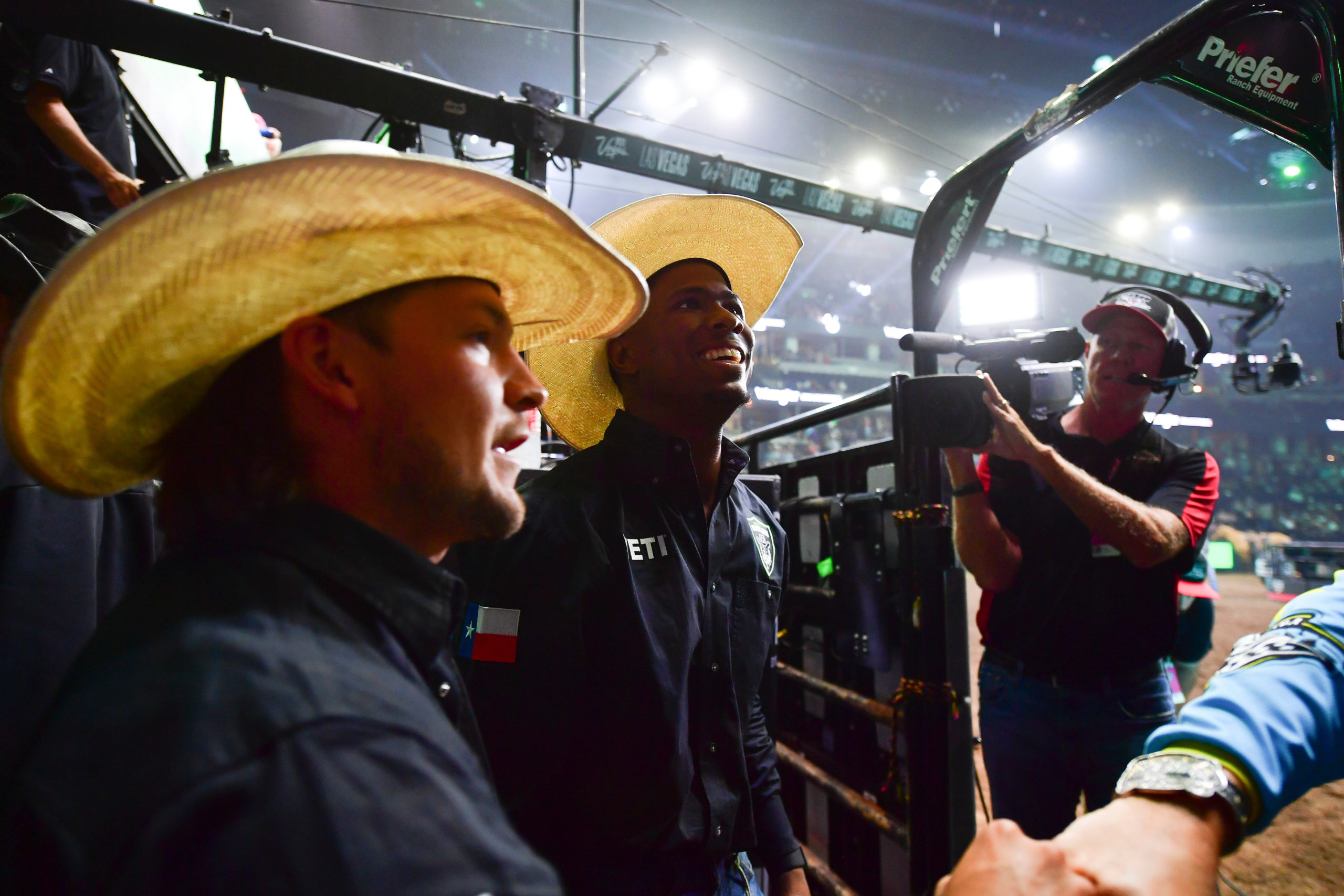 “This has been a one-on-one sport for almost 30 years, and now it’s about teams; that changes the entire story,” says Robby Greene, who oversees TV and production for PBR. “The camaraderie and team spirit add a whole new level to the story. To watch teammates and coaches on the back of these bucking chutes pulling for the guy out there [riding] is really special to watch. I’m excited to present that to our audience in a new and totally different way.”

After debuting at the outdoor Cheyenne Frontier Days July 25-26, the PBR Team went into full swing with indoor events at arenas in Kansas City, Anaheim, and, this weekend, Nashville in an 11-event regular season that will be followed by championship weekend in Las Vegas in November. All PBR Team Series events are being broadcast on either CBS or CBS Sports Network or are streamed live on Paramount+ or PBR RidePass on Pluto TV.

Best of Both Worlds: Melding the Broadcast and In-Venue Shows

From an operations standpoint, the live broadcast mirrors the in-venue show, with the same talent heard in the arena and on television (as opposed to two independent shows for PBR’s primary Unleash the Beast series). 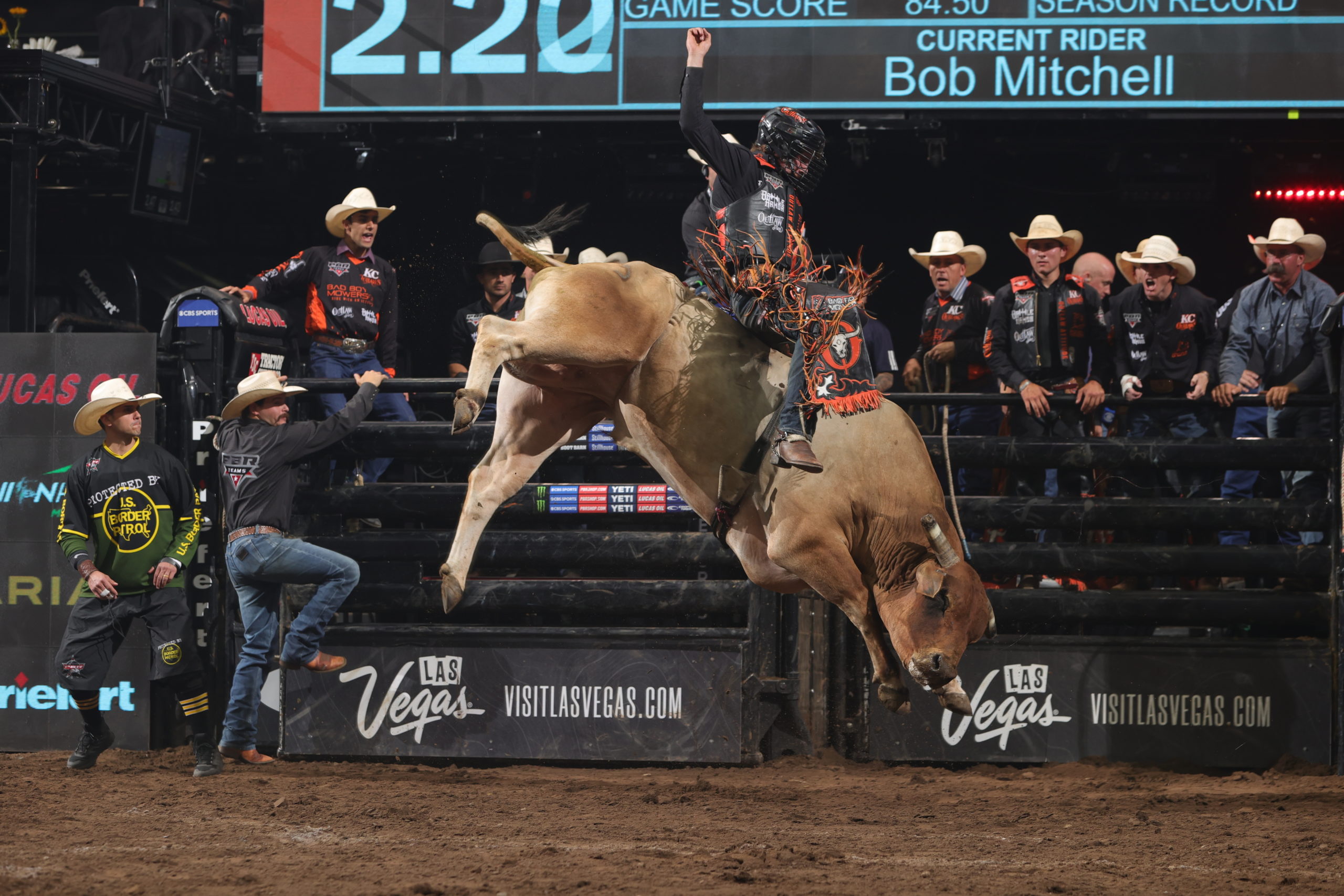 “Over the years,” says Greene, “people at our live events have told us, ‘I wish I could hear the television commentators while I’m in-arena,’ and then people watching on television at home say, ‘I wish I could see and hear more of what is going on [in the arena].’ So we’re trying to give everybody the best of both worlds by combining these two distinctly different shows and making it one product.”

As part of the single-show mentality, the CBS TV broadcast desk, captained by Kate Harrison, is prominently located in the middle of the bucking chutes rather than in a traditional announce booth. In addition, CBS has embedded sideline reporters Allen Bestwick and Matt West and dedicated cameras to each team’s bucking chute — similar to coverage of dugouts in baseball broadcasts. All these elements will also be incorporated into the in-venue videoboard show, bringing fans in the stands and at home closer to the action than ever before.

“We’re definitely still learning,” says Greene, “but we’re just so excited to be able to provide that same perspective to both the spectator that bought a ticket [at the venue] or that’s watching at home. We can offer that perspective now from the entire talent team — both in-arena and television. Is it perfect? Not yet. But is it a product that we’re proud of? Absolutely. And we’re getting better every week.” 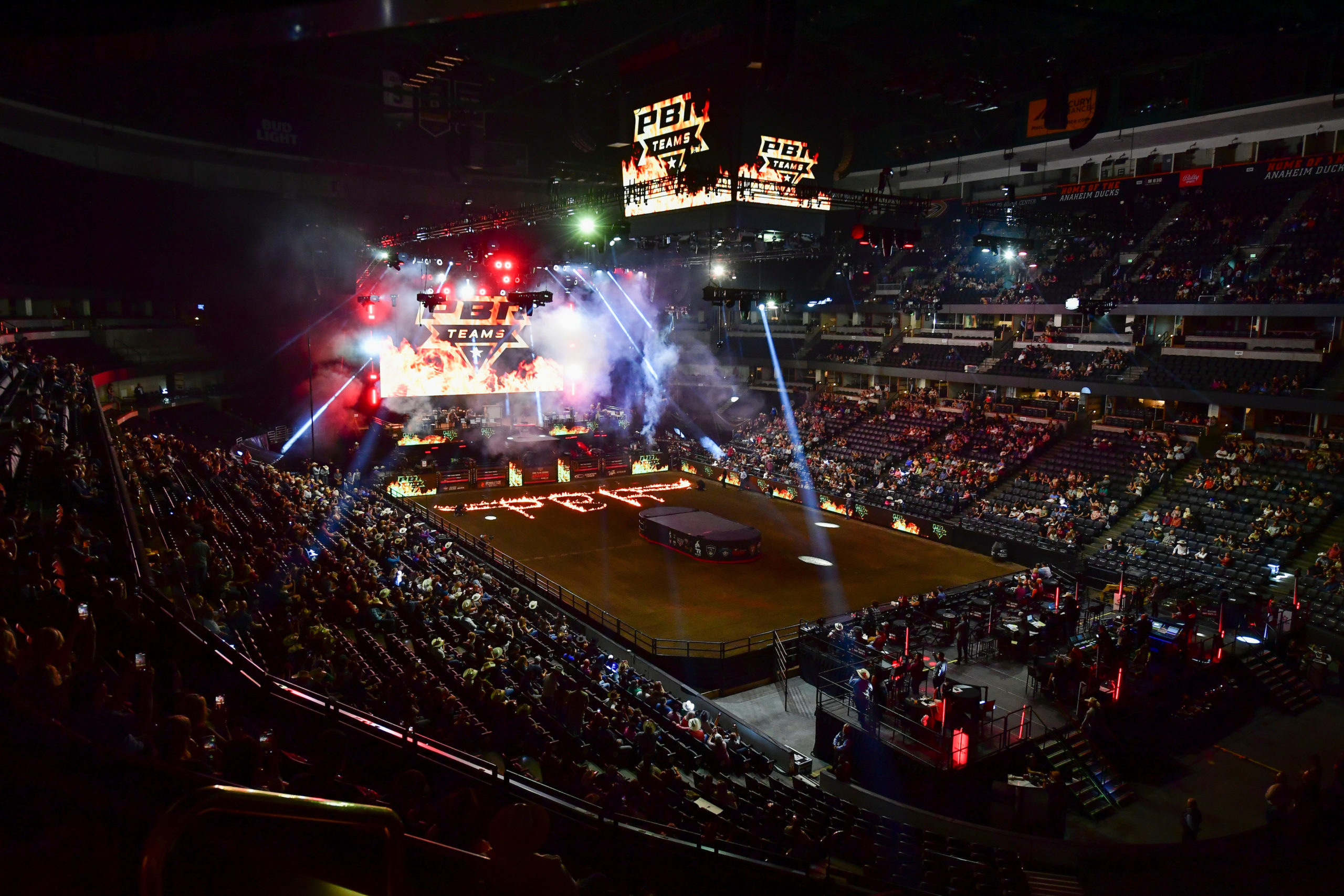 On the audio side, a new sound system equipped with 56 line-array speakers and eight subwoofers delivers 512,000 W of sound amplification. PBR has also invested in state-of-the-art sound-reinforcement technology to improve sound levels and clarity everywhere in the arena. Dan Hickman, head of production, PBR, told the Wrangler Network that the system (developed by a German audio company specializing in high-end concert audio) dramatically improves sound clarity and allows his team to digitally steer sound away from the TV booth and other areas that require quiet. 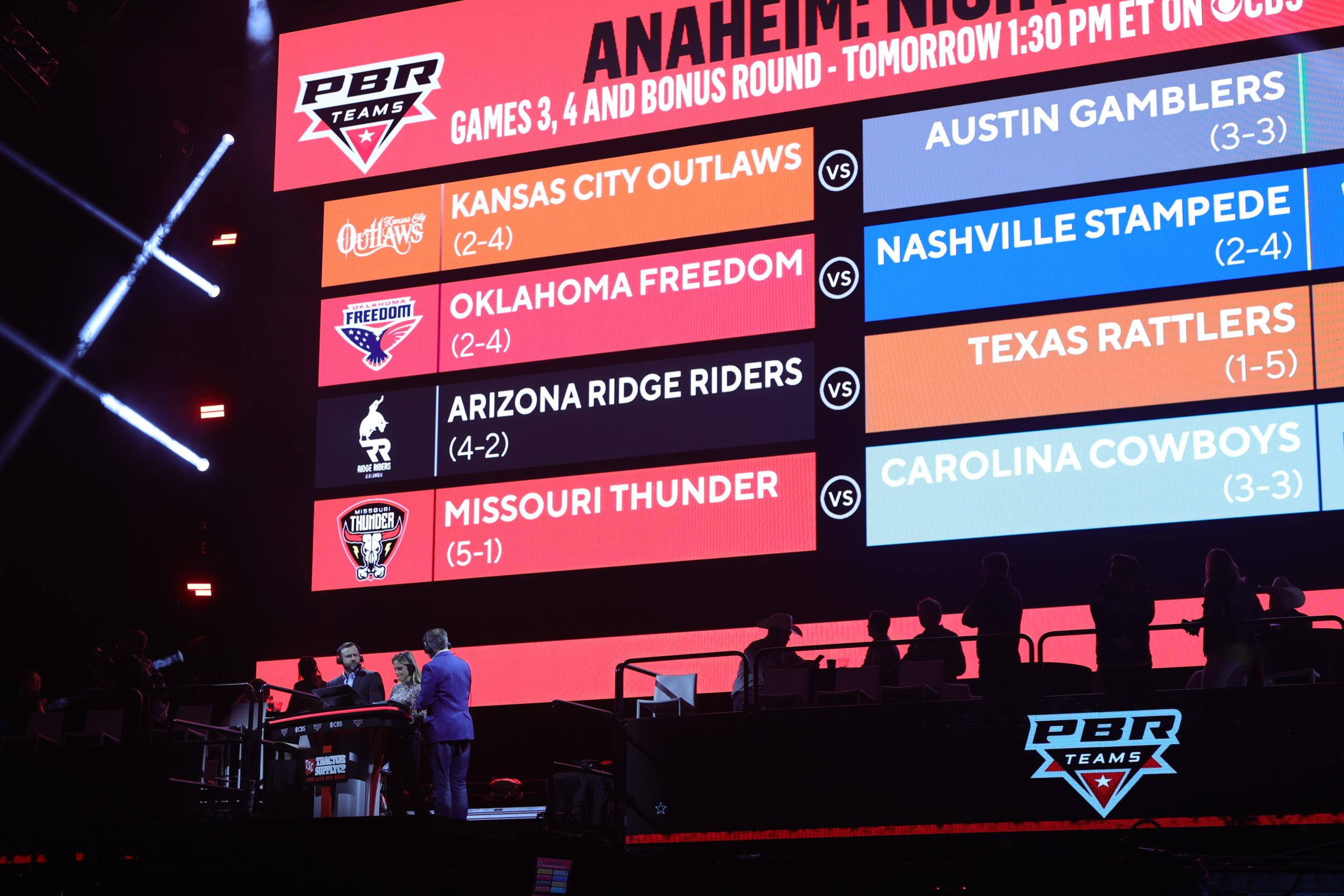 A total of 15 semi-trucks are required to transport all this gear from venue to venue each week, and that doesn’t count the trailers and trucks carrying an average of 90 bulls and 750 tons of dirt for each three-day event.

The addition of 30 seats on a new deck above the bucking chutes put VIP guests practically on top of the action. Another 18 Dirt Suites are located in the end-zone area opposite the chutes. Greene says the in-venue show now feels more like a high-profile title fight or WWE show than a rodeo.

“I think I underestimated just how big the wow factor would be at one of these PBR Team events,” he says. “I just sit back in awe of what has been created in the arena with these 360-degree LED videoboards, the new sound system, the new people-pen structure, and the concert stage. If you didn’t think a PBR could get any better, you have to come check one of these out.” 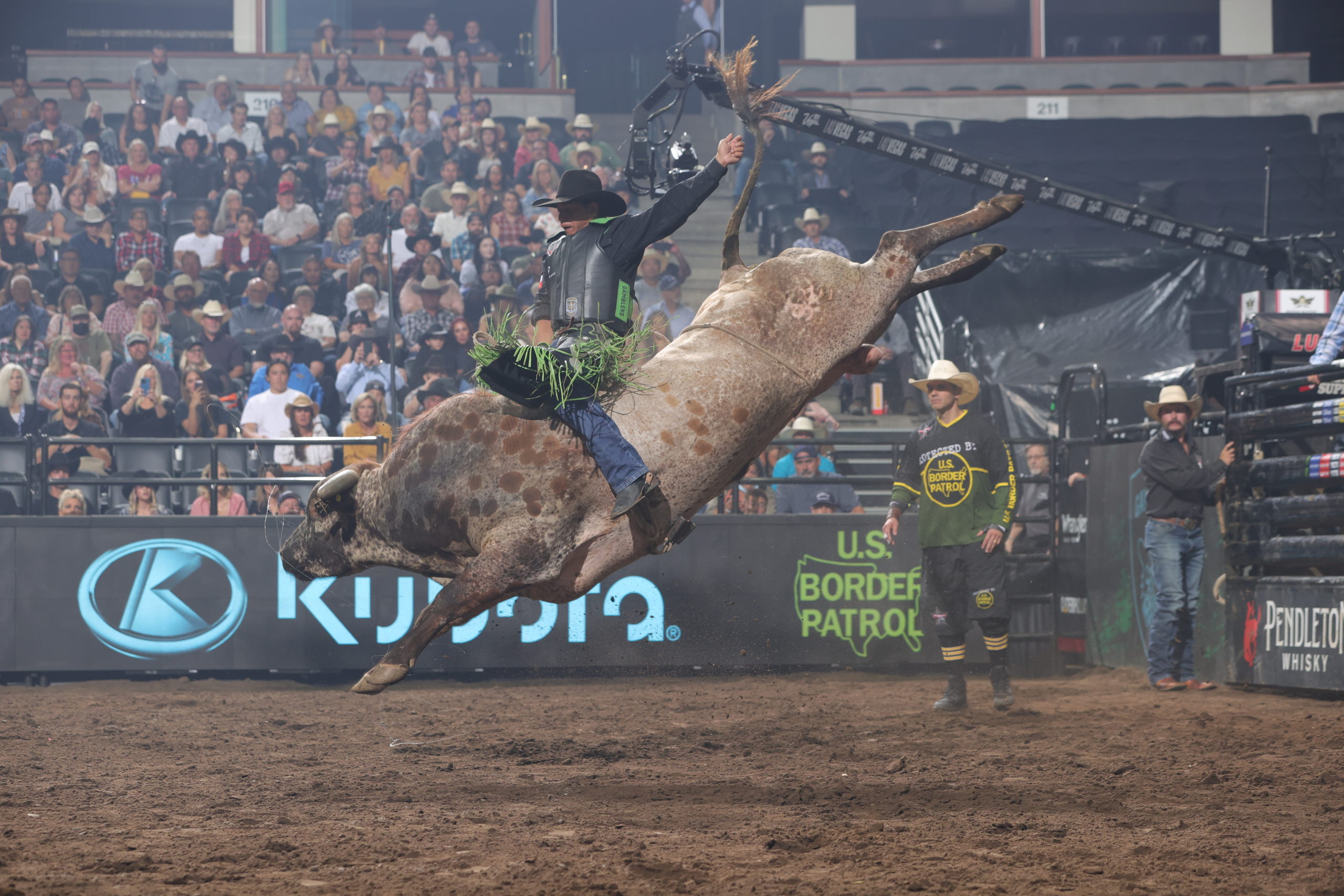 PBR’s 15-camera complement includes multiple Sony HDC-4300’s running in 6x super-slo-mo (including one in the shark cage), an RF handheld, multiple POVs, and two jibs on either side of the ring providing low-angle “hero” shots of both the rider and bull. Also new is a Sony a7 mirrorless camera with a DJI stabilizer to offer shallow–depth-of-field shots from inside the ring.

“We’re trying to give you more up-close–and–personal action and coverage shots that you haven’t seen before in the 29 years of PBR,” says Greene. “That [mirrorless] camera’s ability to get up close and personal is unlike anything we’ve ever had. We’re still ironing out some of the RF and technical [aspects], but the pictures that it’s going to show both in arena and on television are absolutely amazing. We’re continuing to learn and get better at putting you as the fan right in the front row.”

With each team’s coach miked at PBR Team Series events, PBR added a Calrec Brio 36 audio console to handle the submix, given the increased number of mics, nat sound, and other audio sources being brought into the broadcast. The production team can integrate the coaches audio into the broadcast in addition to coaches interviews with the embedded reporters at each bucking chute.

“I couldn’t be more impressed with [the coaches mics] so far,” says Greene. “We want to do more of it as much as possible [moving forward], because those are the little nuggets of gold that, in our prior setups, just weren’t brought to life for either the [in-arena] audience or the television audience. And now we’re giving you, the fan, a sense of what those conversations are like in the chutes. We are truly getting the sounds of the game like never before.”

For the first time, PBR is also integrating a scorebug graphic into its broadcasts to help the viewer follow the team scoring. PBR has partnered with SMT to create the scorebug as well as the data-fueled graphics that play a vital role in the Team Series broadcasts and in-venue shows.

“Now that it’s a team sport with five-on-five competition, we have so many more graphics to tell the story,” says Greene. “We can show the cumulative score with five riders, the points they need to [defeat] the other team, overall team statistics and bull statistics, and a lot more. That’s all information that, prior to now, we were just delivering verbally and weren’t able to deliver in a graphic format. So that’s very exciting tool to have.”

Production Continues To Evolve on the Road to Las Vegas

PBR Stampede Days in Nashville this weekend will be the fourth PBR Team Series event, and Greene says that both the broadcast and in-venue shows have already grown by leaps and bounds. He expects the production to continue to improve with each passing week on the way to the championship in Las Vegas as his team becomes more comfortable with the new format and the arsenal of new technology at their fingertips. 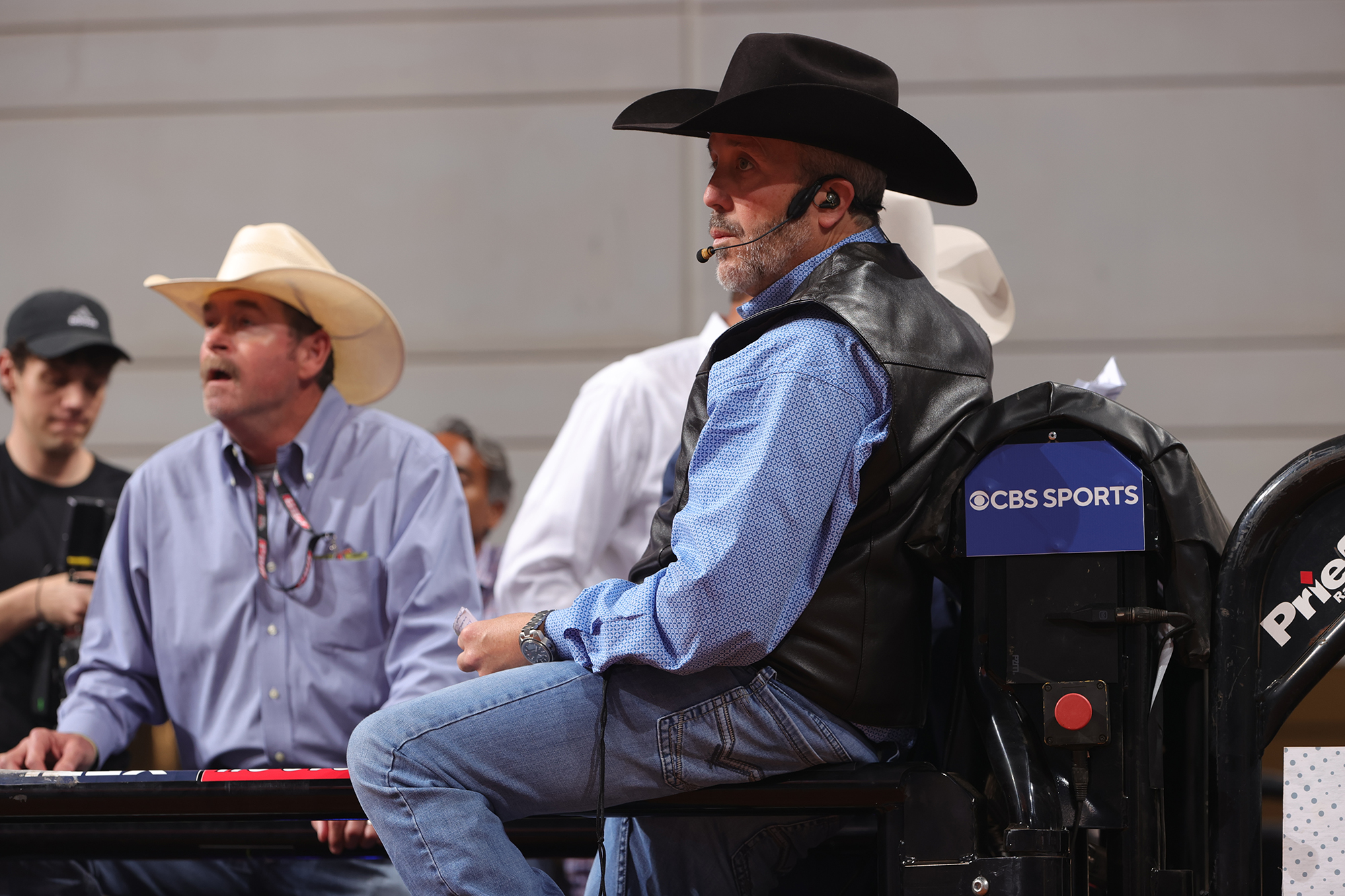 Robby Greene on hand in May for the PBR World Finals at Dickies Arena in Fort Worth, TX

“The amount of coverage, the backstory, and behind-the-scenes and in-your-face coverage that we’re going to be able to provide to our viewers is unparalleled to anything that you’ve ever seen, including on our very successful broadcast of World Finals each year,” says Greene. “We also have a really vested fan base [and] get a lot of feedback from that constituent group. We’re leaning on those fans that watch us or attend week in and week out because they have really good ideas. We know we still have a lot to learn, but we couldn’t be happier with how it has gone so far.”

SVG Director of Digital Brandon Costa contributed to this article.