Sports Broadcasting Hall of Fame 2022: Terry Adams, the Calm at the Center of Olympics Tech

There is no sports production on the planet larger than an Olympic Games, and no broadcaster does as much as NBC Olympics in terms of content creation and innovation. Since the 2000 Sydney Summer Games, Terry Adams, retired VP, IBC engineering, NBC Olympics, was at the center of the effort, overseeing the technological infrastructure of NBC’s footprint at the International Broadcast Center. It was a run that saw multiple changes in technology and workflows and a massive expansion of programming. 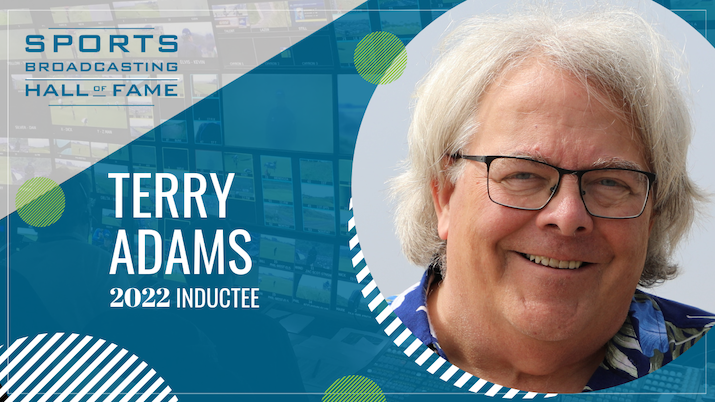 According to David Mazza, SVP/CTO, NBC Sports and NBC Olympics, in more than 25 years as engineer-in-charge (EIC) in mobile units, Adams worked on some of the biggest sports and entertainment shows and had a knack for executing big shows flawlessly.

“He also had a great eye for both picture and sound quality and never compromised either,” Mazza adds. “He could get along with almost any client and remained calm no matter how big the show or how big the challenge.”

From the very beginning of his time at NBC Olympics, Adams was involved with driving innovation. The 2000 Sydney Olympics featured a technological advance that transformed the Olympics technical setup: the “Rack in a Box,” or RIBS, which then-director, technology, Matthew Adams (no relation) conceived after communicating with some Department of Defense logistics folks.

“The whole issue with the Olympics is scale,” says Terry Adams. “When you deal with manufacturers, they can have a product working on the bench with, say, 20 nodes on it. Then you tell them you need 250 nodes, and the whole thing collapses. The demands of an Olympics are just massive scale.”

The purpose of RIBS is to have racks of equipment pre-assembled, connected, and tested prior to leaving the U.S. When the equipment arrived at the IBC, it would be easily up and running.

“Prior to the first Games in Sydney, we did all the pre-configuration at Sony’s facility in San Jose, CA,” says Adams. “We had to leave with it all done because, while we had time to hook it all up again, we didn’t have time to build or invent it all again. It’s basically 20 racks of stuff that is all wired, so you plug the power in, get interconnection, and you’re done.”

Growing up in Cleveland Heights, Adams fit the classic young-engineer profile: he enjoyed taking things apart to see how they work. And the AV club in junior high and high school sparked his interest in TV. But it wasn’t until he got to Ohio University and began working at WOUB Athens, the PBS station affiliated with Ohio University, that he had a sense of a career path.

“When I first went to school, I wanted to be an architect and then a structural engineer, but then I got bit by the TV bug working at WOUB, a real PBS affiliate with real cameras and 2-in. tape machines,” he recalls. “It was a group of die-hards, who kept the station operating over the summer; with fewer people around, we did everything.”

Doing everything led to a skill set that allowed him to interview for a full-time position at Television Production Center (TPC) in Pittsburgh.

“People talk about karma and planets aligning,” Adams says. “At that point, the whole remote business was just in its infancy, and TPC had an amazing roster of talent like Ron Sutzman, John Luff, Bill Lorenz, Terry Kulchar. It was trial by fire, but the industry was in its infancy, so everybody made up the techniques as we went.”

TPC’s acquisition by Unitel gave Adams a chance to take the next step in development. The shows were bigger, including high-end entertainment shows like the Grammys, Live From the Met, Live From Lincoln Center, and Inaugural Galas.

In 1996, Adams got his first taste of Olympic operations, working on the host-broadcast production of the Atlanta Games, for which Unitel provided facilities.

“I was still at Unitel,” he says, “and we had one truck doing the host feed and another truck in the same compound doing the NBC show.”

In 1998, Adams joined the NBC Sports family and settled into a role with NBC Olympics ahead of the 2000 Sydney Games.

Mike Sheehan, coordinating director, NBC Olympics, says he had the pleasure of working with Terry as a truck EIC prior to their working together at NBC Olympics.

“He was magical,” says Sheehan. “What every remote-production person looks for is a smart, engaged truck technical leader who can see what the production people are trying to accomplish and help the team do what is best for the show. Terry was a great truck EIC in his early years, and he was a great partner at NBC.”

Moving to NBC allowed Adams to experience having the momentum of a huge broadcaster behind him when working on arguably the biggest sports event in the world. It was especially helpful when it came to discussions with manufacturers, who saw the opportunities and challenges of meeting a literal Olympic-size challenge. And being at NBC placed him at the center of major transitions in broadcast engineering and technology.

In 2005, Adams led the transition to HD, which was made in two steps during the 2006 Torino Games and the 2008 Beijing Games. With 2016 Rio and 2018 PyeongChang, NBC started experimenting with 4K HDR, and he oversaw the conversion to enable the NBC IBC to simultaneously handle 4K HDR, 1080p HDR, and 1080i SDR, in both 50 Hz and 60 Hz. At the same time, the IBC was converted to an IP infrastructure, a monumental task in itself — and both these transitions were made in the middle of the pandemic.

The biggest challenge of his career, Adams says, was the move to HD. “All the bandwidth went up, and the picture shape changed, which had such an impact on the production folks. Everything was new, and we weren’t even sure all the gear was going to work together.”

The move to IP was his next major challenge, and it involved a lot of backup plans and incorporating the IT pros with the broadcast veterans. Lots of learning going on.

“Mazza says that most of our job is to manage risk because, frankly, nothing is allowed to fail,” Adams says. “When we went to the IP router the first time, we had a whole backup coax router that could get the show to New York. Now IP provides a built-in backup if you’re doing two networks, but it took a lot of convincing to get us all on board.”

Working on an Olympics broadcast has historically been one of the best ways to see the world in a meaningful way. The stress is high, but a months-long effort offers a unique opportunity to see how the rest of the world works and lives.

“The nice thing about this job, at least my part of it,” Adams says, “is that, when you went to the host city, you went to live there for four or five months. It’s not like a tourist coming to Beijing and saying, ‘Okay, let’s go to the Forbidden City.’ Instead, you find a grocery store or a place to get your clothes washed, and you become a local. That was the fascinating part to me, and I still have really deep friends in all those countries.”

As for the evolution of technology, Adams considers the solid-state camera, with CCD-based imagers instead of tubes, was the leap that made the biggest difference.

“Before that,” he explains, “we would spend a lot of time aligning the tubes and testing the camera. And, if you dropped it on the ground, you had to start all over again.”

His favorite Olympics? “I keep coming back to Sydney. Not just because of the Games but because it was our first time out with the RIBS system. We were in a bit of the ‘we so got this’ coupled with the stunning people and beautiful attitude, and it’s on the water. We all bonded with Down Under quickly. I would live in Sydney if I could.”

Adams’s influence extends beyond sports. He was instrumental in getting the low-light-level Live From Lincoln Center and Live From the Met series on the air, with some of the most magnificent images on TV at that time. He also designed and supervised construction of mobile units and oversaw the transitions from tube-based to solid-state cameras and from analog composite NTSC tape recordings to digital component HDTV files.

“I’ve been extraordinarily lucky with things lining up,” he says. “From TPC to Unitel to NBC — it all just kind of lined up. I’m obviously proud of the work, and I think we did really great work.

“I’m also proud,” he continues, “of work we’ve done with a forward-looking high school teacher in Pennsylvania who was putting together a TV studio for morning announcements and whatever. We had a bunch of donated professional-level equipment, and coming out of that have been two or three kids that are stars. They’re going to be the next generation of the business, and they will do things totally differently, but I’m really proud of being a mentor to them.”

Mazza says a calm, pragmatic way of solving problems allowed Adams to have such a long and successful career with the Olympics unit.

“In such a highly charged environment,” Mazza says, “with all the pressure that builds up on the two-year planning cycle, it can be overwhelming. But TA always handled it with ease and gave those around him a great sense of confidence.”