NBA Tip-Off 2022: NBA on TNT Gets Off to Busy Start With Doubleheader, Onsite Show

NBA on TNT tips off today with a massive production effort comprising a doubleheader with games in Boston (7:30 p.m. ET) and San Francisco (10 p.m.) and a studio show onsite at San Francisco’s Chase Center, home of 2021-22 champion Golden State Warriors. There will also be a fan festival complete with concert in the parking lot. 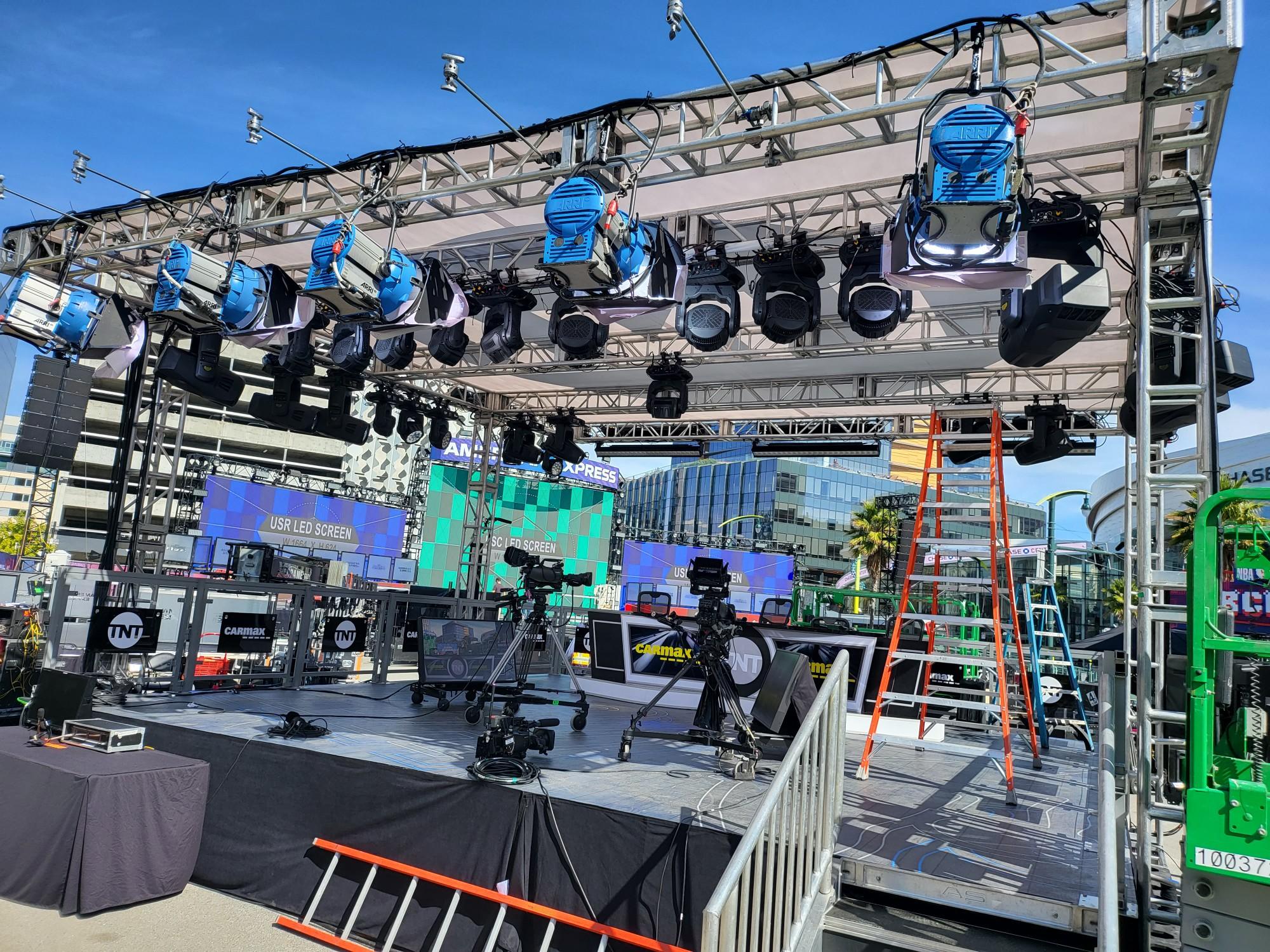 The NBA on TNT studio show will be onsite at Chase Center in San Francisco to tip off the 2022-23 NBA season.

“It’s going to be exciting,” says Chris Brown, VP, sports production tech, Warner Bros. Discovery (WBD) Sports (formerly Turner Sports). “We’re going to have three sets for NBA on TNT, including one in the fan-activation area near the concert. We’ve taken over some parking lots and created an entire fan zone that will be surrounded by the concert.”

The fan zone is at Thrive City, an 11-acre mixed-use complex in the Mission Bay district that embodies a lot of the trends in venue design: venues are increasingly surrounded by areas intended to bring a completely different energy to attending the event. Beginning at 4:30 p.m., the Warriors and Chase will host a pregame fan fest on the plaza surrounding Chase Center, offering various activations throughout the east and west plazas and the esplanade: live music and performances, games, photo ops, a kid’s zone, and more.

In addition, live coverage of the pregame ceremony and the Warriors vs. Lakers matchup will air on Thrive City’s 3,108-sq.-ft. videoboard. WBD Sports worked with the city of San Francisco to access 72 strands of fiber beneath Third Street and the light-rail system to connect the set and concert to the compound.

“It’s going to be spectacular, very dynamic, and a lot of fun,” says Brown. “NEP Denali California will be onsite for the studio show. The game truck will be Game Creek Pride because our usual NBA trucks from NEP are still doing baseball playoffs.”

NEP Supershooter 5 will be in Boston for the Celtics game. 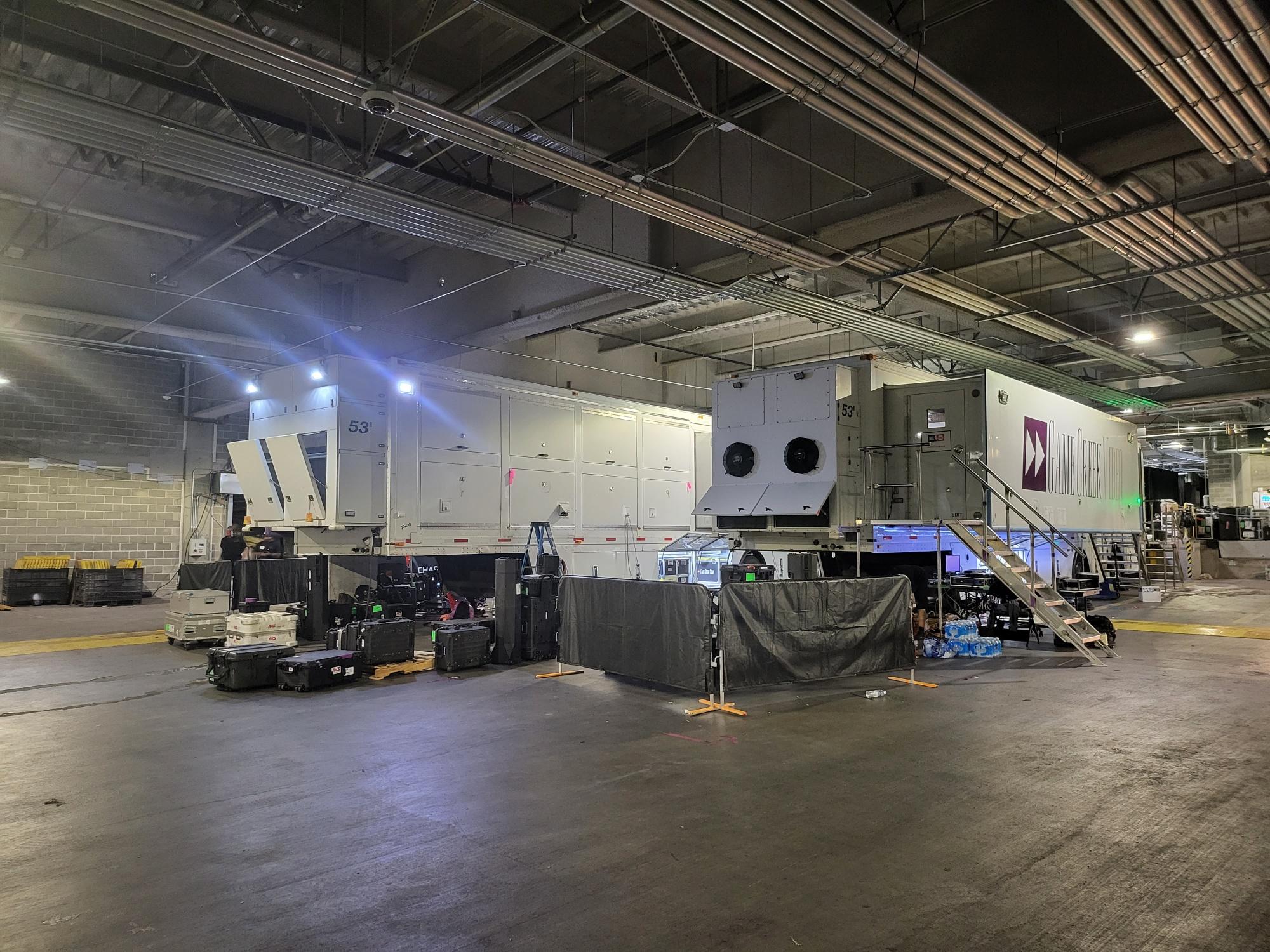 The 22 cameras covering the action for the Golden State game will include five robotic cameras, five super-slow-motion units, and three RF cameras (a POV attached to the banner as it is raised, a Canon C70 on a Ronin rig for game action, and a Canon C300 for the ring ceremony).

“We have a Sony HDC-4800 camera with 8X recording and a Fujinon SK-35 700mm lens for shallow–depth-of-field capture from the slash position,” Brown explains. “We got a lot of good looks out of it last year during March Madness.”

One addition this season is an enhanced virtual shot clock thanks to Vizrt’s upgrade of the Viz Arena system. 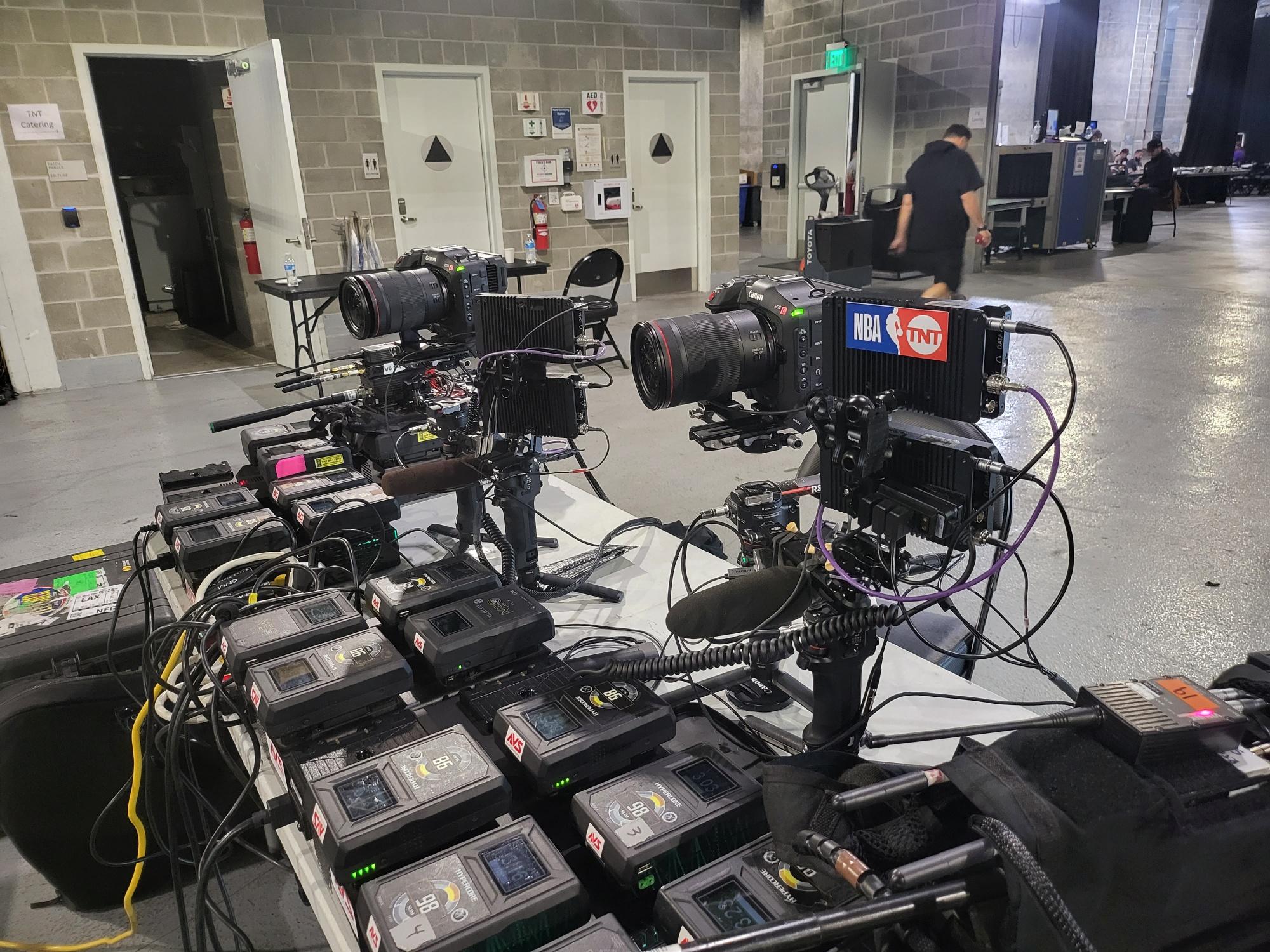 Shallow–depth-of-field cameras will play a major role in the opening night of NBA on TNT action.

“We tested it over the summer, and the clock is going to be much more vivid,” says Brown. “We won’t have to fight the arena floors, ribbon boards, or lights, glare, and reflections. We essentially work with 29 different floor types, and that has always been a challenge.”

“We do look to add extra things on the audio side and certainly on camera coverage,” adds Brown. “One of the signature things we appreciate a lot are the super-slo-mo cameras. That has been a differentiator for us.”

WBD Sports is also producing a Twitter Live show out of a Lyon Video truck.

“Twitter Live is a companion product that runs alongside the broadcast, with four on-location contributors who talk around the current game and use their own coverage cameras along with some of the TNT game cameras,” says Brown. “It provides a unique perspective on the game.”

Aerial coverage will also be part of the opening-night mix, another addition that enhances production values.

“All of the elements, especially with the studio presence onsite, make the event look and feel so much bigger,” says Brown. “That’s the goal: to feel big to start the season. There’s a lot to be said for having operations present as well as announcers, production staff, and technical operations.”