The team at MLB Network is not only busier than ever for a World Series, providing more coverage than ever around the Fall Classic, but it’s also feeling a bit of nostalgia with the Philadelphia Phillies representing the National League. 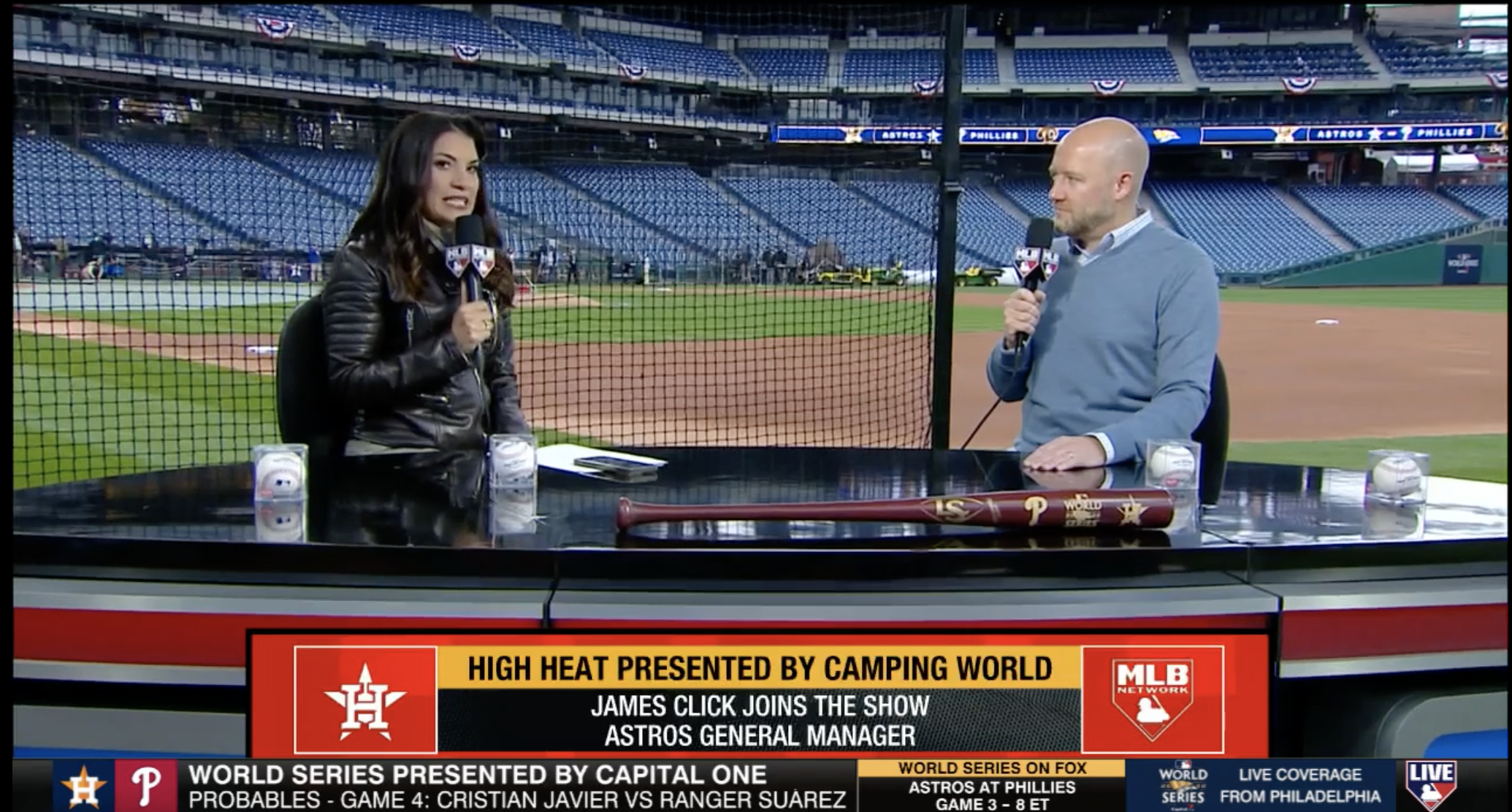 MLB Network has new sets for World Series coverage in Houston and Philadelphia for its onsite coverage, which begins at 3 p.m. ET.

“We’re super excited because our first World Series was in 2009, which was the Yankees and the Phillies,” says Susan Stone, SVP, engineering and operations, MLB Network. “Back then, we had three or four talent sitting in director’s chairs with a little footer in front of them. We’ve definitely come a long way.”

The days of a simple footer and director’s chairs are long gone, and a new Rover set from Filmwerks is in use in both ballparks this year. The set is part of a production plan that has about 350 production personnel onsite for each game and more than 25 personalities in the mix, providing in-depth analysis, interviews, on-field demonstrations, high-end video elements, and wall-to-wall highlights. Onsite coverage from the two ballparks, the Houston Astros’ Minute Maid Park and the Phillies’ Citizens Bank Park, begins at 3 p.m. ET before every game, concluding at 8 p.m. and picking up after the game.

MLB Network, VP, Remote Operations, Tom Guidice notes that new graphics bring a new look as well, giving the production some additional excitement. “The Rover set has new technology and a cleaner look as we’ve tweaked things over the years. We had two new ones built for this series and plan to use them for the next couple of years.”

The MLB Network team is also creating more digital and social-media content, including a show for Twitter.

“We’re doing a Twitter batting practice show every day,” says Stone. “We’ll probably do a show at least to Game 5. That’s something a little new for us.”

Besides reaching viewers in new ways, the social- and digital-content creation allows greater utilization of onsite gear and personnel.

“We’re utilizing resources in an interesting way,” says Jason Hedgecock, senior director, remote technical operations, MLB Network. “Often times, when you’re on-air, there are going to be some idle resources onsite, and that has always been the nature of the business. But we’ve been able to find ways to interestingly utilize those resources on the digital side. Making use of idle resources has been a big push for us.”

MLB Network is also using 5G, thanks to a partnership with T-Mobile.

Stone says that a key facility in the compound is a media-management trailer connected to the network’s facility in Secaucus, NJ, giving the team at MLB Network headquarters a chance to dive into content as soon as it is ingested.

Adds Hedgecock, “There are a lot of league initiatives around the World Series that aren’t strictly around the game, like youth events. So we have ENG crews out gathering footage, and they transfer that into the media-management system. Then the team back in Secaucus can access it the same way they would if it was inside the building. We have about eight ENG crews here so that’s a big part of what we’re doing here as they are ingesting stuff continuously.”

Key to that workflow is the fiber network that MLB has put into every single ballpark.

“We have so much flexibility and latitude because we have so much connectivity,” notes Hedgecock. “We don’t need to ride on a cloud service because we’re able to meet all of our needs on that network.”

A remote graphics area in Secaucus is also taking advantage of the fiber connectivity, he adds. “It’s basically our C unit, but it’s back in Secaucus.”

Game Creek Video is providing mobile units and engineering support for MLB Network with Chesapeake, Edit Three, and Discovery onsite in Houston and Madison, Edit Two, and Gemini in Philadelphia.

“They’ve been our partner for a while,” says Hedgecock. “We’re using almost every inch of those trucks for something. We’ve got some REMI stuff, traditional coverage for the world feed, and multiple digital signage as we have a full load of international rightsholders onsite for the first time since the pandemic started. We had six in Houston and five in Philadelpha: folks from Latin America, Asia, and Europe are here broadcasting in their native languages. We’re sort of back up at full steam, and then there are the digital initiatives and other things that we’ve brought.”

Adds Stone, “It’s great to be fully up and running again, and we’re just getting back into having everyone fully onsite.”