Live coaches interviews fly in from around the state, thanks to solutions and services by The Video Call Center

In Texas, it doesn’t get bigger than high school football.

You know this, and, at Bally Sports Southwest, the regional sports network owned by Diamond Sports Group and Sinclair Broadcast Group, the data backs that up. Last year, the most-watched program on its air was a high school football game. This is the network that exclusively carries live coverage of the NBA’s Dallas Mavericks and San Antonio Spurs, the MLB’s Texas Rangers, and the NHL’s Dallas Stars. 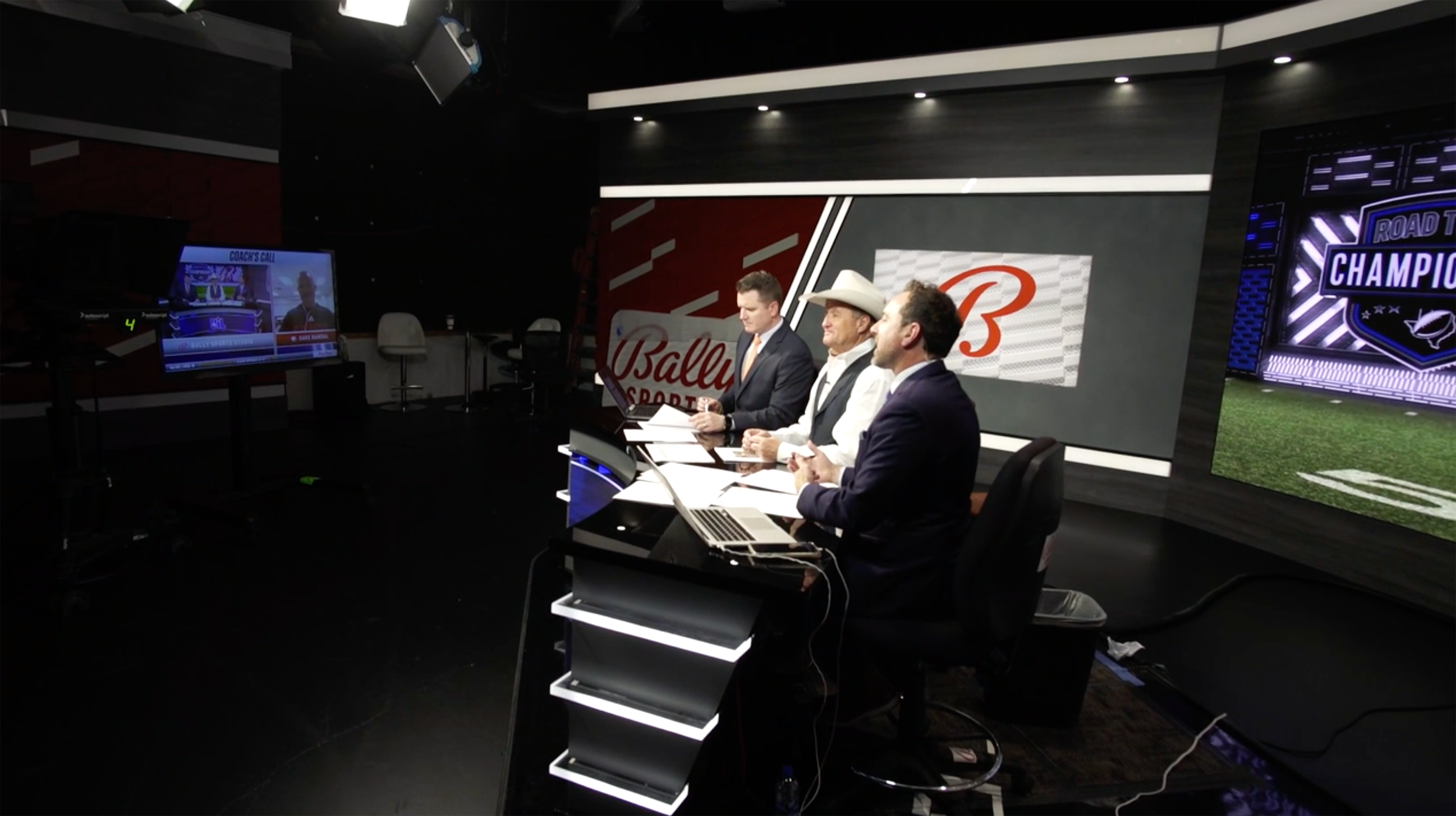 Texas High School Football may be exciting — and an instant winner with local viewers — but covering it effectively and equitably is a monumental task. The state is home to more than 1,200 high school football programs ranging from 6-man divisions to the very largest programs in the state.

Doing justice to all those conferences, divisions, and programs is nearly impossible, but, with more than 25 years of covering high school football and a blossoming technology partnership with The Video Call Center (VCC), Bally Sports Southwest has built a strong reputation as a go-to destination on Friday nights. Offering more than six hours of live programming each week, it brings the latest from gridirons across the state to the homes of all Texans.

“There are schools in El Paso that are in a different time zone,” laughs Jason Walsh, VP/executive producer, Bally Sports Southwest. “That’s a long way away from us. VCC gave us the ability to talk to coaches or players from around the state. It has been very successful and opened our eyes to what could be.

“As VCC has grown,” he continues, “our high school product has grown, and we’ve used [the company] more and more. Now we’re at the point where we use multiple endpoints with them, so that we can rapid-fire one interview after another interview. While one interview’s being done, the next one’s being set up right behind it. Again, it’s about making our high school product look as big as this state. VCC has been a very helpful partner when it comes to that.”

What VCC offers is a service that reliably ingests and transmits live video from smartphones, both simplifying and expanding the ability to conduct live interviews with coaches from all over of Texas. It allows Bally Sports Southwest to be in significantly more places without having to send full crews to cover hundreds and hundreds of games.

During the regular season, Bally Sports Southwest offers studio coverage of live highlights from around the state on Football Fridays, which airs from the network’s studios in Irving, TX, at 7:00-11:00 p.m. CT. Then, when all the games are in the books, High School Scoreboard Live kicks off at 11:00 p.m. ET.

The Eagles are flying high! 🦅@NewtonEaglesTx HC Drew Johnston joins the show to talk about the HUGE opportunities that lie ahead! @uiltexas | #TXHSFB pic.twitter.com/Pljvk476zC

Since Bally Sports Southwest (then named Fox Sports Southwest) started using The Video Call Center in 2018, the concept of bringing a coach on live with a smartphone video call has grown from a fun occasional bonus to the core lifeblood of the network’s coverage.

“When we started this,” says Walsh, “VCC was trying to add a cherry on top of a sundae. As we’ve sat down and explored our high school product and thought about it, the truth of the matter is that VCC is our high school product. It’s the central point of what makes us successful. The technology they have — and how easy it is to integrate into our studio — makes our show dynamic. They have become the central piece in our ability to do high school football and to cover this state equitably.”

Says VCC CEO Larry Thaler, “As the network has gotten better and more people have moved to [smartphones], the show’s getting braver and doing more. When a team wins a game, [the coach] has got to take his players on a 200-mile bus ride back home. Now he can do a live remote on the regional sports network on that bus while the players are behind him in the bus. That happens a lot, actually, and is very cool.

“The truth of the matter,” he continues, “is that our platform has gotten better, too, and our connectivity options are better. The tools that we use to determine the best way to get the coaches on the air have improved, and the whole process has sped up and gotten more reliable. As it has gotten more reliable, it has become a more critical portion of the show.” 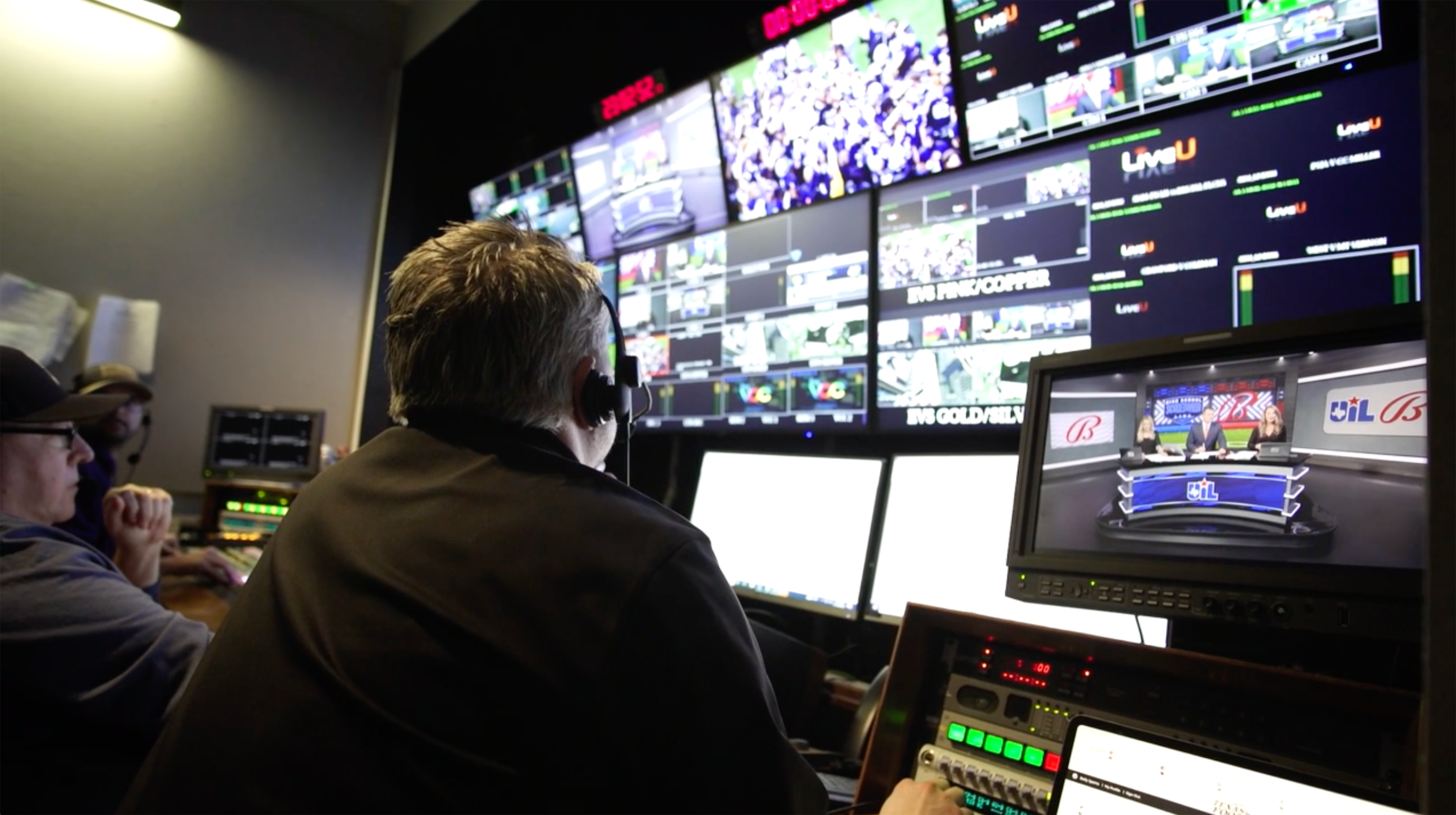 Bally Sports Southwest combines VCC’s Caller Cloud Service with its AirFirst platform, a cloud-controlled management system, for live IP-based remotes. Simply put, VCC sends a coach a link to click on their smartphone and pipes their video feed into the VCC network. For the coach, it’s as easy as making a FaceTime call.

With that system, Bally Sports Southwest regularly brings on coaches live from their offices, from on the field, and even on team buses traveling home from a thrilling road win.

“It’s great to be able to go right into a coach’s office and see what’s on their whiteboard or to see what’s in their home,” says Walsh. “It gives everything a more authentic character. The very best interviews, in my opinion, are the ones that happen on the school buses. When a school is traveling across middle-of-nowhere Texas for an hour and a half, the coach is able to do the interview with the lights off in the background because the players are sleeping. That’s real. What VCC does is allow us to show everybody how real Texas high school football is.”

In this case, Bally Sports Southwest relies on the support of VCC, which is located in New York State, in producing the call-in element of live studio coverage. VCC coordinates with coaches during the week, makes the call connections for the network during the live shows, and even handles the task of chasing down coaches whose teams pulled off upsets and thus are unexpected guests for the show. Bally Sports Southwest has also boosted its relationship with VCC to include two endpoints: two coaches can be on the air at the same time, or, as is more often the case, one coach can be on-air with the talent while another is being prepared and QCed by the control room.

“We’re a part of their team to the point that you can’t tell where the control room ends and VCC begins,” notes Thaler. “A number of the coaches that we work with recognize us and talk to us by name. A lot of their cues are coming from us. The best part is that we’re putting them through to the control room during the commercial break before their segment so the hosts are getting to chat with their upcoming guests before they go on the air. That interpersonal discussion informs both the tone and sometimes the substance of the interview.”

The flexibility of the VCC system is essential for the network in case of emergencies. In one example from last year, Bally Sports Southwest was able to get a coach on following a massive upset. When Highland Park knocked off Frisco Wakeland, one of the top programs in the state, the crew didn’t have the contact information for the winning team’s coach. By chance, one of the parents of a Highland Park player in the stands was also a Bally Sports Southwest employee. He was able to get onto the field and hand his phone, connected to VCC, to that coach and get him on-air. 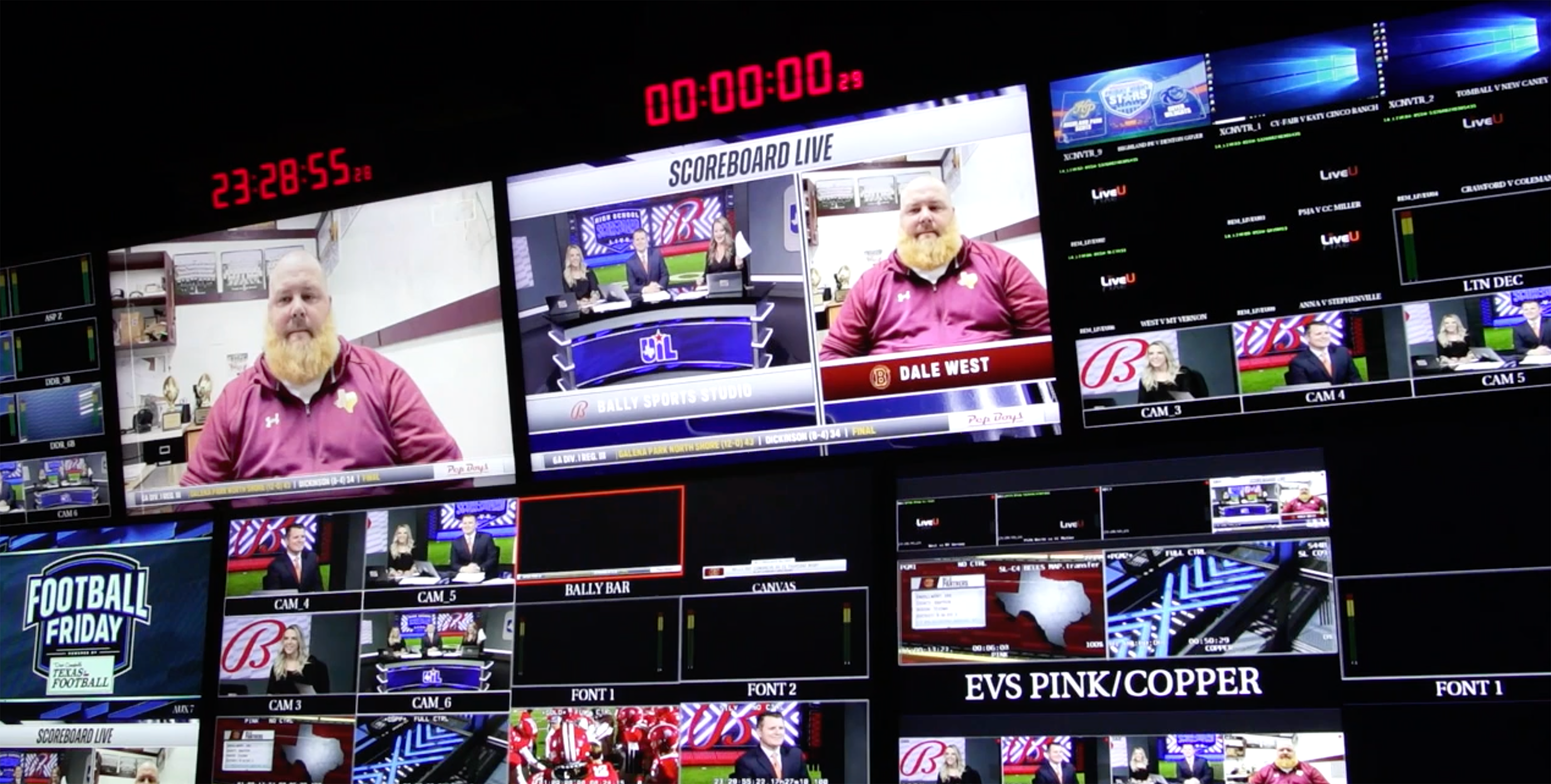 This year, Bally Sports Southwest increased its endpoints with VCC from one to two, allowing one coach’s interview to be set up behind the scenes while another call is on the air.

As November becomes December, state playoffs are fully under way, and more eyes are on high school football than at any point of the year while the very best slug it out for hometown immortality. With most playoff games on Saturdays, both of Bally Sports Southwest’s high school football shows have shifted from Friday to Saturday, and its Irving headquarters are buzzing with work behind the scenes.

Bally Sports Southwest has two control rooms and studios in its Irving headquarters; both are outfitted with Grass Valley production switchers and cameras. On nights when the pro-sports schedule allows, high school programming will both and expand its coverage offerings.

Industry-wide, the challenge of cracking the nut that is varsity sports still exists. Its massive long tail makes it nearly impossible to wrap a business plan around. Walsh acknowledges that the passion native to Texas High School Football makes it unique, but he does offer a piece of advice to other networks that might be looking to increase their commitment to high school sports.

“It’s a passion play,” he says. “The question is, Do you have the passion to cover it? Because it’s going to take that. You’re going to need your graphics [team] contacting 800 schools and getting their logos all set up so that they work in your environment. You have to have the network set up FTP delivery of highlights or chase highlights.

“It isn’t all going to happen in year one,” Walsh continues. “It’s going to take a multi-year plan to get to where you want to be. I would just say, if your heart’s in it, you can get there and there’s the money in it. You have to have the people who care; then you can get it done.”