Sports Broadcasting Hall of Fame 2022: Joe Buck — The Voice of the Modern Generation

What makes a play-by-play man generational?

Is it longevity? Joe Buck checks that box: a fixture in broadcasting since 1989, when he first called baseball games for the Louisville Redbirds, a minor-league affiliate of the St. Louis Cardinals. 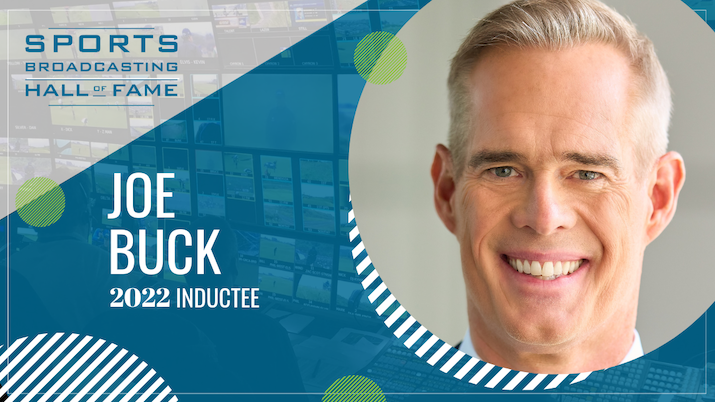 Is it having a special collection of all the right tools? Again, check.

“His voice was butterscotch,” recalls Sports Broadcasting Hall of Famer David Hill, former president of Fox Sports. “Magnificent timbre, mellow but magisterial, good breath control, and his use of the pause was masterly.”

Is some part of it luck? Being in the right place at the right time for some of the most memorable moments in modern sports: Mark McGwire’s 62nd home run. The David Tyree Catch in Super Bowl XLII. The final out of the Boston Red Sox World Series Championship in 2004 and the Chicago Cubs’ in 2016. The Minneapolis Miracle.

“In my opinion, he’s the Curt Gowdy of this generation — doing it all from the Super Bowl, World Series, and U.S. Open to bass fishing, horse racing and everything in between,” says longtime Fox Sports producer Pete Macheska. “His voice is synonymous with some of the biggest moments and brightest spotlights, entertaining without ever getting in the way of the story unfolding on our screens. An industry-defining broadcaster and exceptional person. There aren’t many like Joe Buck.” 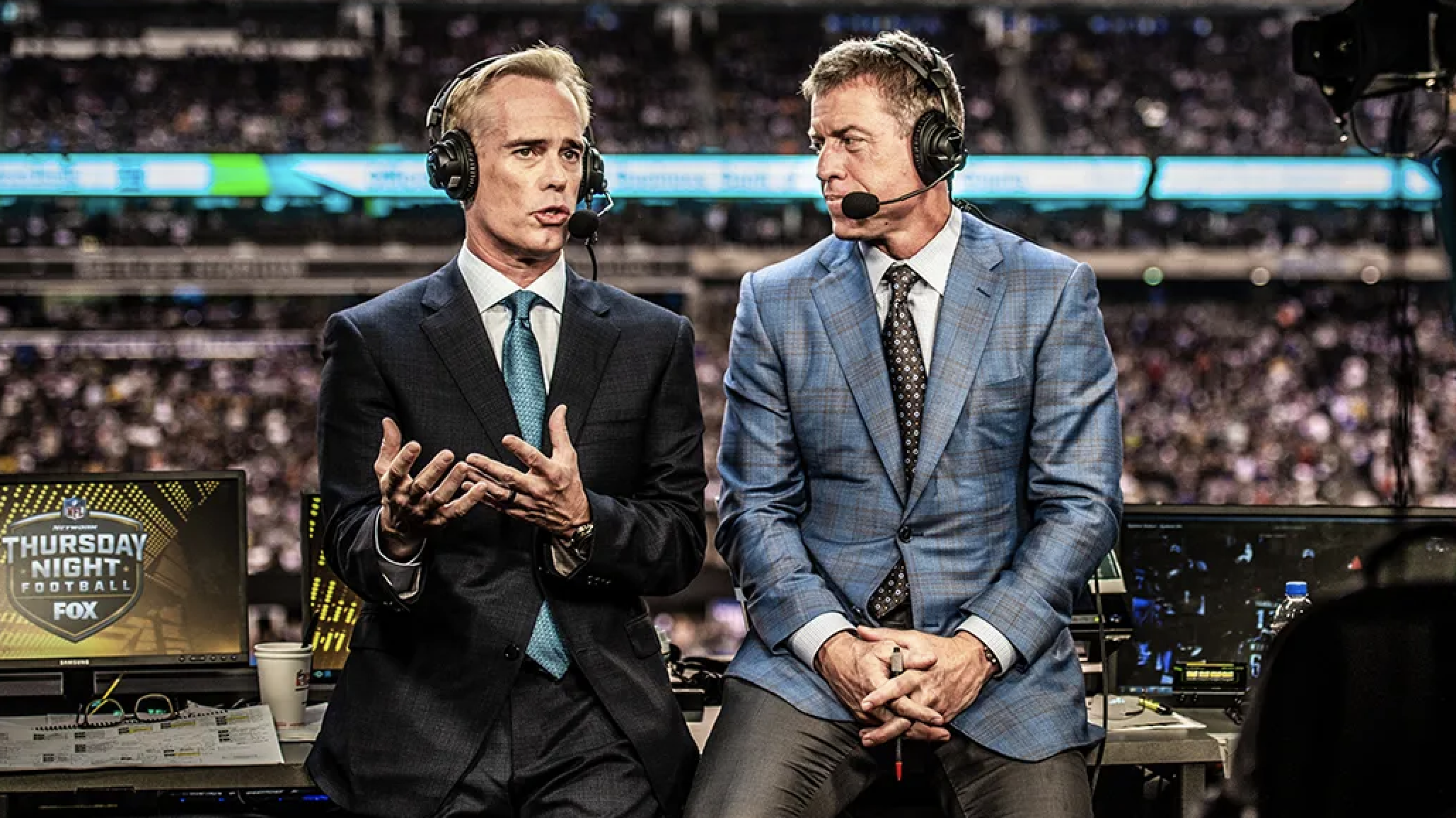 Or is it something more? Maybe what makes a play-by-play man generational is being just the right voice to meet the moment, however wild or unpredictable those moments may be.

“Joe is an amazing talent and one of the greatest play-by-play guys in sports television,” says Rich Russo, a veteran director at Fox Sports who was at the front bench for many of Buck’s NFL broadcasts. “When you turned on a game on Fox and heard his voice, you just knew it was a huge game and a big event. Joe has had some of the most iconic calls in the history of sports television. He has an incredible ability to know and understand the moment and when to make a call and when to just lay out and let the pictures speak for themselves.” 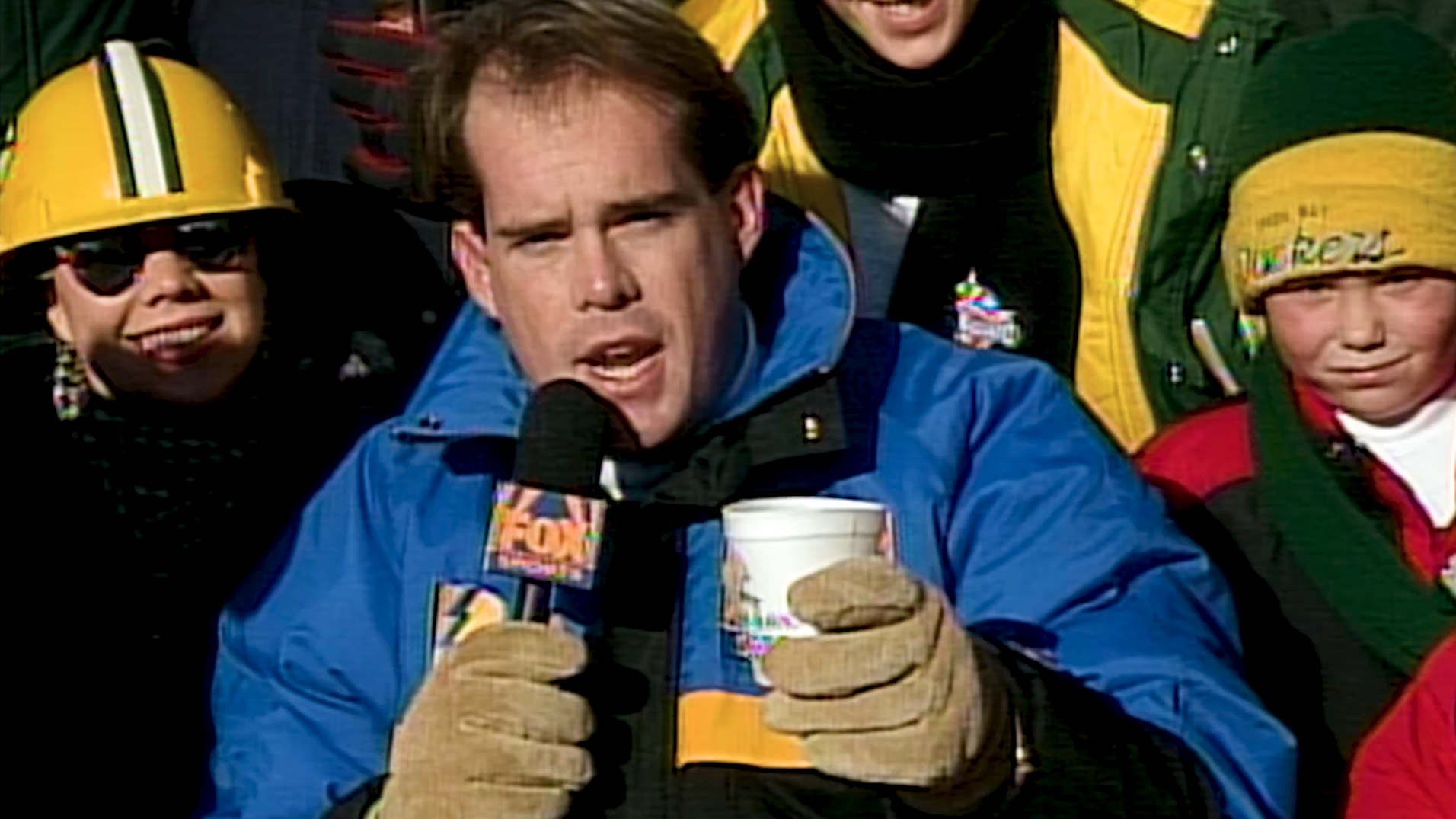 Buck got the call-up to the big leagues in 1991, joining his father, Sports Broadcasting Hall of Famer Jack Buck, in the radio and television booths for the Cardinals. But it was when Fox Sports launched in 1994 that he got his big break.

Hill and Sports Broadcasting Hall of Famer and former Fox Sports Vice Chairman Ed Goren had already secured their squad, bringing in a team of Hall of Famers, the legendary Pat Summerall and John Madden, to lead its first foray into football. They had even signed another iconic veteran of the business, Dick Stockton. Now they wanted that younger voice, someone who would take the brand into the next generation.

“[When we were starting Fox Sports,] I wanted young, fresh voices,” says Hill. “I knew of Jack Buck by repute, and I’m a great believer in bloodlines. Even though Secretariat sired winners like Rising Star and Lady’s Secret, none of his progeny came close to emulating his remarkable career. So it was with some trepidation that I [watched Joe’s] tape. Boom. This kid knew his stuff.” 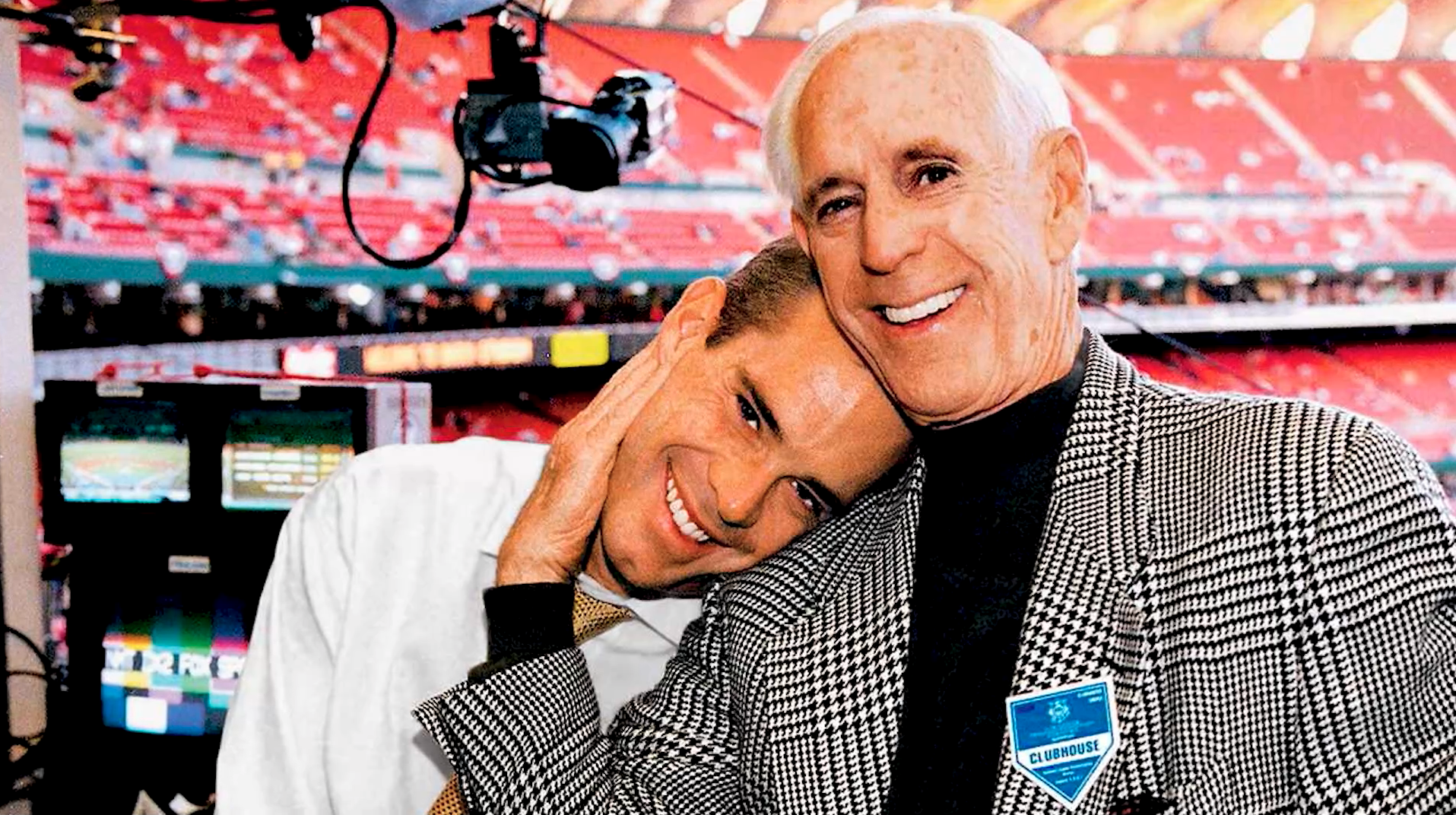 At just 25 years old, Buck became the youngest man to ever call a regular slate of NFL games, and both Fox Sports’ legacy and Buck’s career were headed to the moon.

In 1996, Fox Sports landed the rights to Major League Baseball, and Buck became the lead voice on the package, following in his father’s footsteps and calling baseball, the sport most closely associated with his father. Joe Buck and baseball became similarly linked. Over the next quarter century, his voice accompanied every marquee moment for the sports, including 22 MLB All-Star Games and 24 World Series. He was the youngest person ever to call a World Series game for a broadcast network.

And there was Mark McGwire’s 62nd homerun in 1998. The Yankees dynasty of the late ’90s. The breaking of the Curse of the Bambino in 2004. The first championships for two long-suffering fanbases in Chicago. Even an unforgettable throwback to his father in the 2011 World Series: when David Freese’s walk-off home run sailed out of Busch Stadium to win Game 6, Joe summoned the words bellowed by his father when Kirby Puckett won Game 6 of the 1991 World Series with a home run: “We’ll see you tomorrow night!” 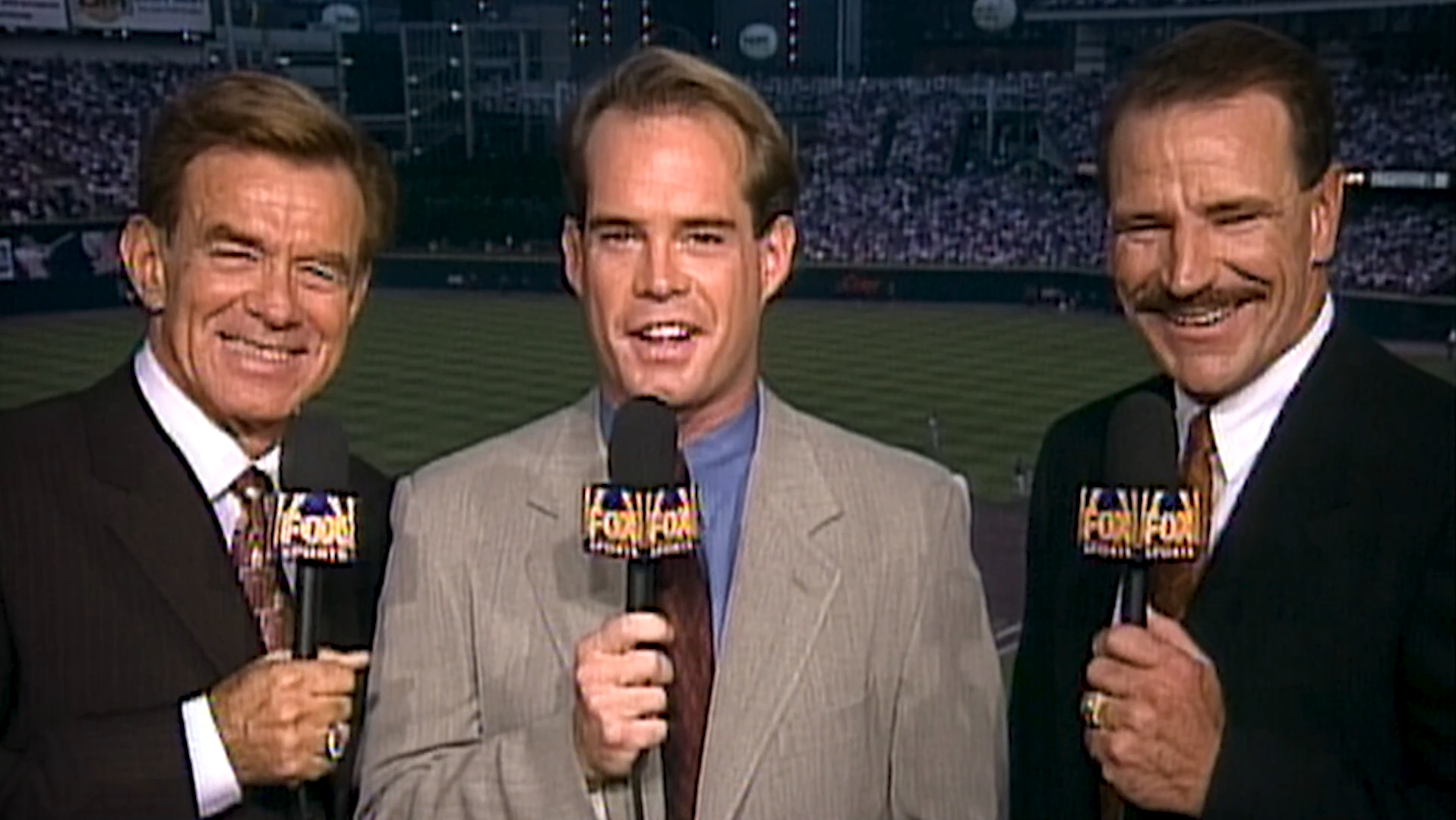 In 2002, he doubled up his duties and became the lead voice of the NFL on Fox, partnered from the get-go with Super Bowl-winning former Dallas Cowboys quarterback Troy Aikman. For more than two decades, the pair has called 280+ regular-season games, 40 playoff games, 18 NFC Championship Games, and six Super Bowls.

“Joe does every aspect of the job while never missing a moment,” says Aikman, “always having a keen sense of timing and elevating every meaningful situation. Simply, he is the best I’ve ever seen.

From annual Thanksgiving Games to the greatest comeback in Super Bowl history — the New England Patriots’ win over the Atlanta Falcons in Super Bowl LI — Buck has become a regular guest in the homes of Americans, taking them through the biggest nights of their falls and winters — at times under-appreciated, at others just the voice you wanted calling a play destined for the history books. Through it all, he has won the Sports Emmy for Best Play-by-Play a record-tying eight times. 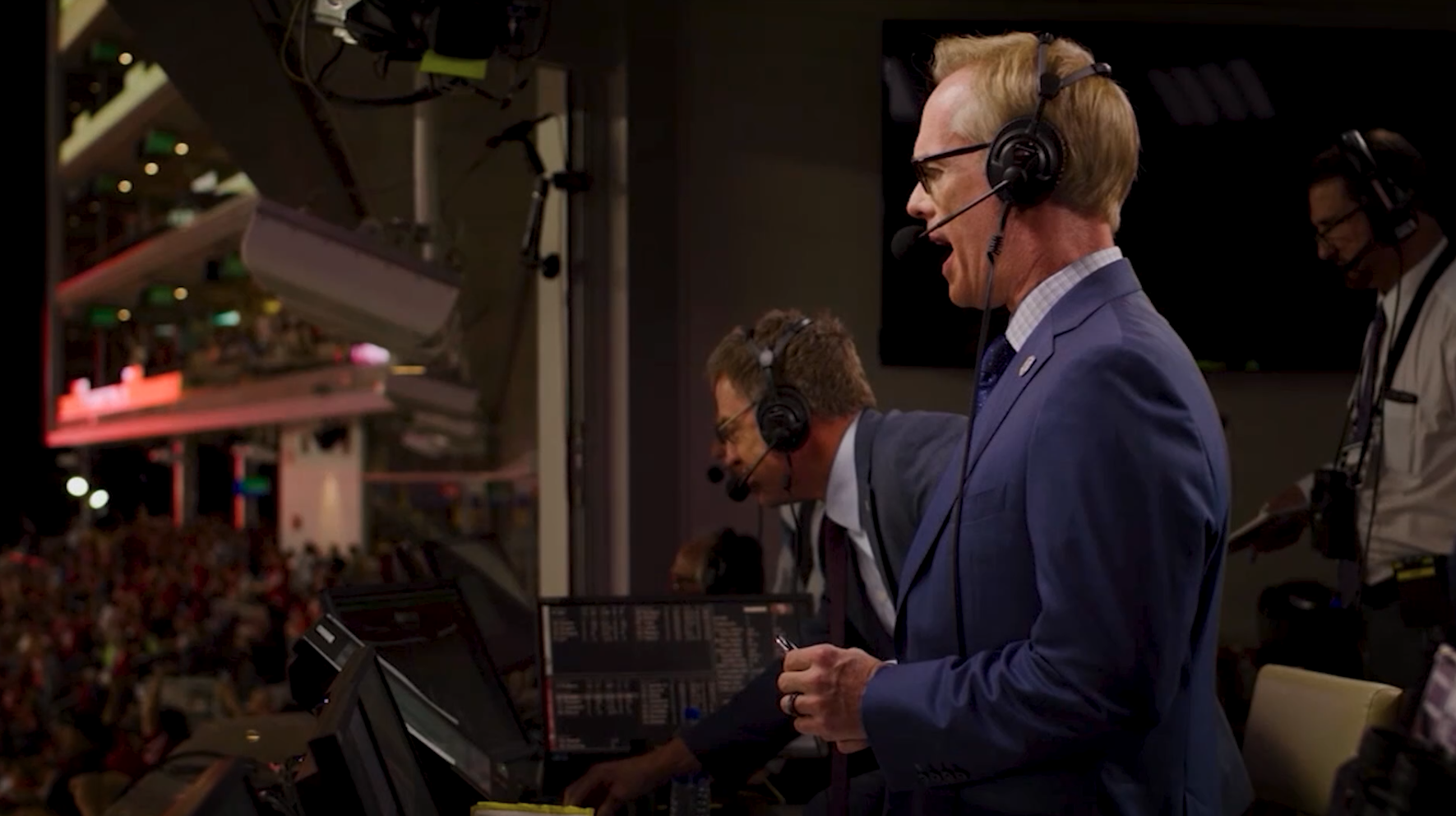 Buck is currently in his 29th season calling NFL games, which has been marked by a monumental shift to ESPN and the iconic Monday Night Football brand. He made the move with Aikman.

“Joe is one of my closest friends, a relationship that extends well beyond the broadcast booth,” says Aikman. “To have a trusted friend alongside me, calling some of the most meaningful and significant games in sports history, is an element I cherish. But just has important to me are all the great times we have with one another and our families away from the camera.”