For the ninth consecutive year, ESPN will showcase the College Football Playoff National Championship Presented by AT&T using state-of-the-art technology and by deploying the network’s best innovation for the presentation of TCU vs. Georgia on Monday, Jan. 9, at 7:30 p.m. ET. 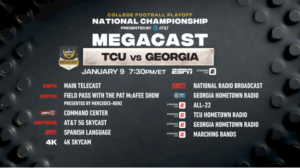 SoFi Stadium will be the hub of ESPN’s innovation on Championship Monday, including approximately 100 cameras providing every angle of college football’s biggest night. State-of-the-art technology includes:

ESPN’s camera complement will include dedicated cameras on TCU head coach Sonny Dykes and Georgia head coach Kirby Smart at all times, as well as unique camera placements providing views of the teams as they enter the field. The Goodyear Blimp will provide aerial shots of Los Angeles and SoFi Stadium.

Chris Fowler and Kirk Herbstreit will call their ninth CFP National Championship together, celebrating the close of their 27th college football season as a commentating team. Reporters Holly Rowe (Georgia) and Molly McGrath (TCU) will provide news and insight from the sidelines, as McGrath and Rowe return to the ESPN telecast for the second consecutive year. Rowe reported on the ESPN Radio broadcast for the first six years of the championship.

For the first time since 2019, the MegaCast fan favorite Field Pass returns to the National Championship on ESPN2. Field Pass with The Pat McAfee Show Presented by Mercedes-Benz will offer entertaining, free-flowing commentary of the CFP National Championship Game, anchored by Pat McAfee, who will roam the sidelines of SoFi Stadium. McAfee will call the action from the unique vantage point, joined by A.J. Hawk, Darius Butler and “Boston” Connor Campbell, as well as a rotation of ESPN analysts, notable personalities, and celebrities throughout the game.

Command Center on ESPNU features a multi-angle presentation with player and team statistics. The telecast will feature four main video feeds including the main telecast from ESPN, Skycam and shots of each head coach throughout the telecast.

MegaCast mainstay AT&T 5G SkyCast returns to ESPNEWS this year, highlighting the popular view from above the action and behind the offense on most plays. This unique angle has long been one of ESPN’s alternate viewing options and is readily available on multiple games every week. Replays will be shown every time the main telecast shows a replay, while never losing the look from Skycam. Additionally, the SkyCam viewing option will also be available in 4K on Comcast, DirecTV, YouTube TV and Verizon.

The Spanish-language telecast (ESPN Deportes) and Hometown Radio (SEC Network and the ESPN App) remain staples of the MegaCast, with the All-22 viewing angle also available digitally.

Sean McDonough calls his seventh CFP National Championship on ESPN Radio, joining analyst Todd Blackledge, who has called the CFP National Championship all nine years on the platform. Lead ESPN Radio reporter Ian Fitzsimmons and ABC/ESPN reporter Kris Budden will have the call from the sidelines of SoFi Stadium, with ESPN officiating analyst and former longtime SEC referee Matt Austin contributing to the commentary. The radio broadcast is available throughout the country on more than 400 ESPN Radio stations, the ESPN App, ESPNRadio.com, SiriusXM, Apple Music, iHeartRadio and TuneIn.

The Spanish-language call of the game will be available on ESPN Deportes, with Eduardo Varela, Pablo Viruega and Katia Castorena announcing the action.

New in 2023, the halftime marching band performances at the College Football Playoff National Championship will be available on the ESPN App. The sights and sounds of TCU’s Horned Frog Marching Band and Georgia’s Redcoat Marching Band will be streaming live via the All-22 view.

ESPN and Cinemark Team Up to Bring CFP to Big Screen

This postseason, fans can catch the biggest game of all, the College Football Playoff National Championship Presented by AT&T, at select U.S. theatres thanks to ESPN and Cinemark