in December 2017, Mobile TV Group dove into the HDR waters with DirecTV’s first live 4K UHD HDR broadcast in the U.S. — which earned a Sports Emmy nomination. Since then, MTVG has rolled out a caravan of 4K and 1080p HDR-capable mobile units. Its newest truck, 51FLEX, however, marks a new era for the company: it is the first to launch with the express intent of producing 1080p HDR shows on a nightly basis. 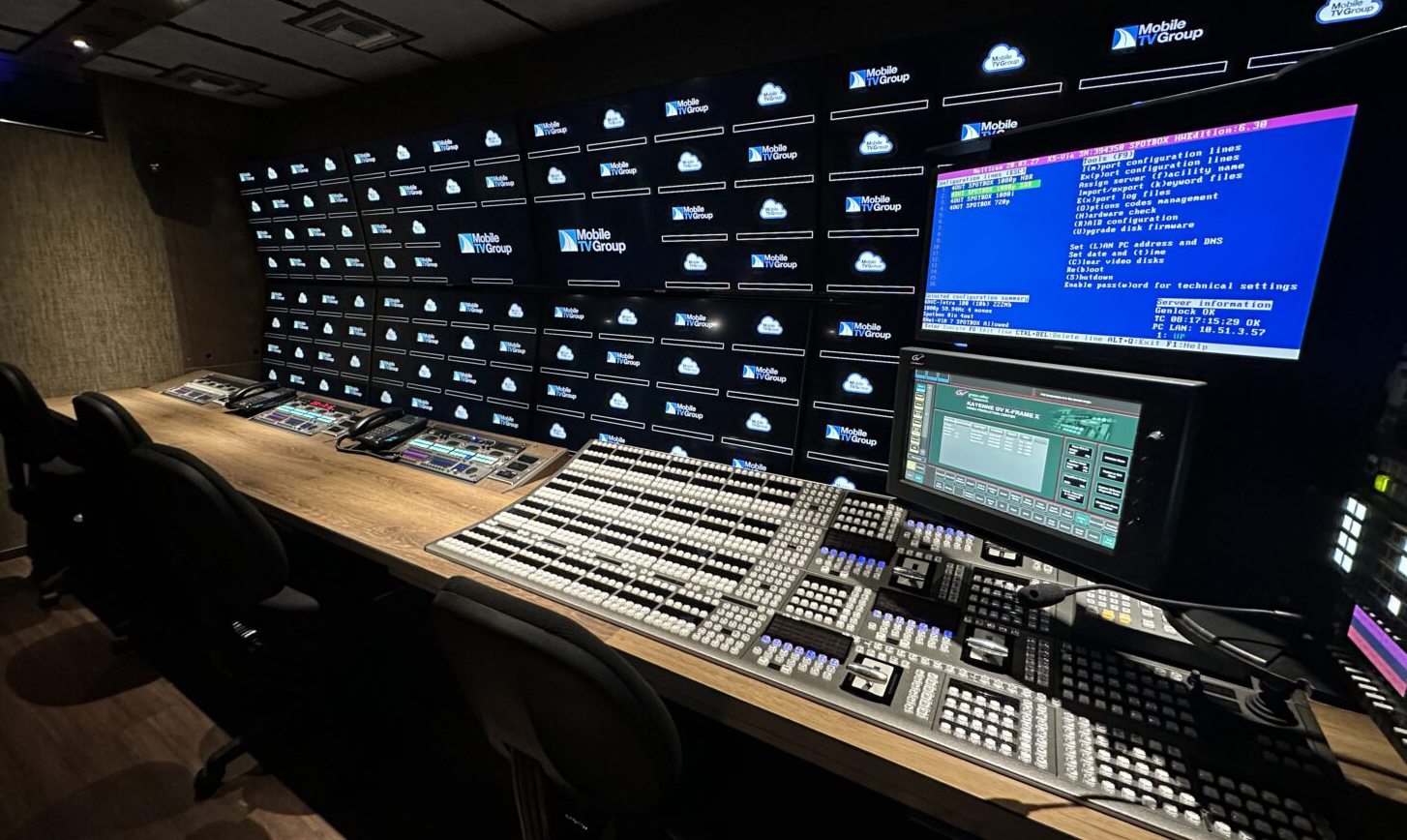 “When we did that first 4K HDR broadcast, we knew it was the beginning of something special,” says MTVG COO Nick Garvin. “And our years of experience have culminated with this mobile unit. We’re extremely proud of not only our history as a leader in the HDR space but also where we are headed in terms of building high-quality 1080p HDR mobile units.”

“Bally Sports is very excited to launch another new mobile unit with our partners at Mobile TV Group,” says Kendall Burgess, VP, technical operations, Bally Sports. “We are currently producing the majority of our broadcasts out of 51FLEX in 1080p SDR. Shortly after the truck launch, we had a successful 1080p HDR test game, where we learned a lot about the new technology. We look forward to getting our L.A.-based technical crews and production teams more experience with the new workflow as we produce more 1080p HDR events in the future.”

As is the case with all of MTVG’s FLEX series trucks, 51FLEX is accompanied by a visitor’s mobile unit (51VMU), which can be deployed by the visiting team’s RSN production crew in person or remotely via MTVG’s Cloud Control platform. As a result, Bally Sports West and Bally Sports SoCal’s production teams can broadcast home games in 1080P HDR while providing the visiting broadcaster their format of choice. 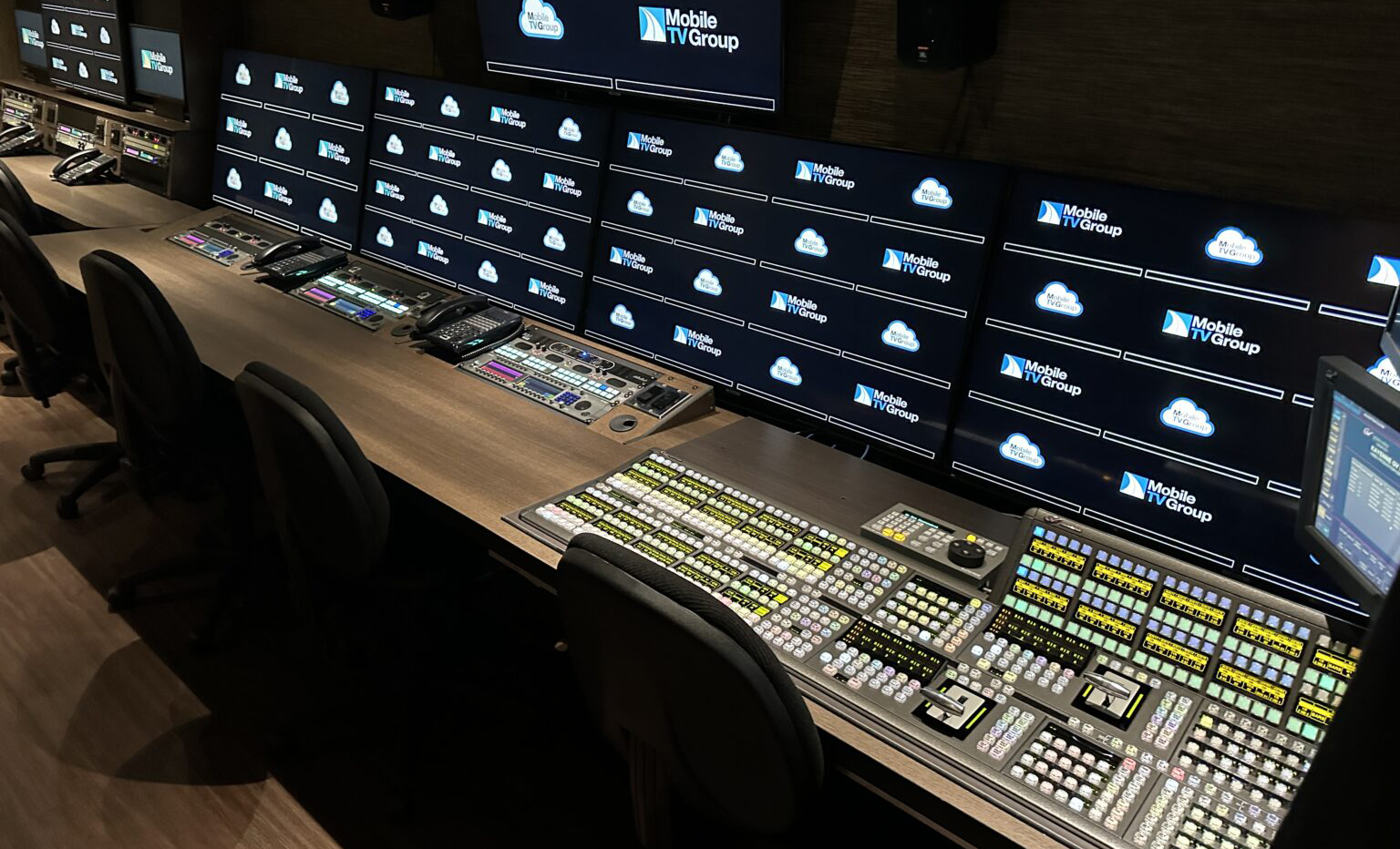 Built onsite at MTVG’s headquarters in Colorado, the 1080p HDR IP-based mobile unit is built around a Grass Valley Kayenne K-Frame X IP switcher (7M/E, 96 inputs/48 outputs) and 128-port Evertz NATX IP router. The production team can use up to 32 sources during each broadcast, including 12 1080p HDR cameras with four running in super-slo-mo.

In the replay room, 51FLEX has four 12-channel EVS XT-VIA IP full-editing replay servers with 16 channels of embedded audio. The truck is capable of 16 HD inputs/12 HD outputs when the truck is running in super-slo-mo mode or 32 HD inputs/16 HD outputs when it is running in HD mode. Two XT-VIAs can also be split into two operator positions (each with 4 inputs/2 outputs), and two positions use LSM Connect (no VGA). The truck is also equipped with a four-channel EVS XS-VIA server for Spotbox (two channels per show during dual feeds). 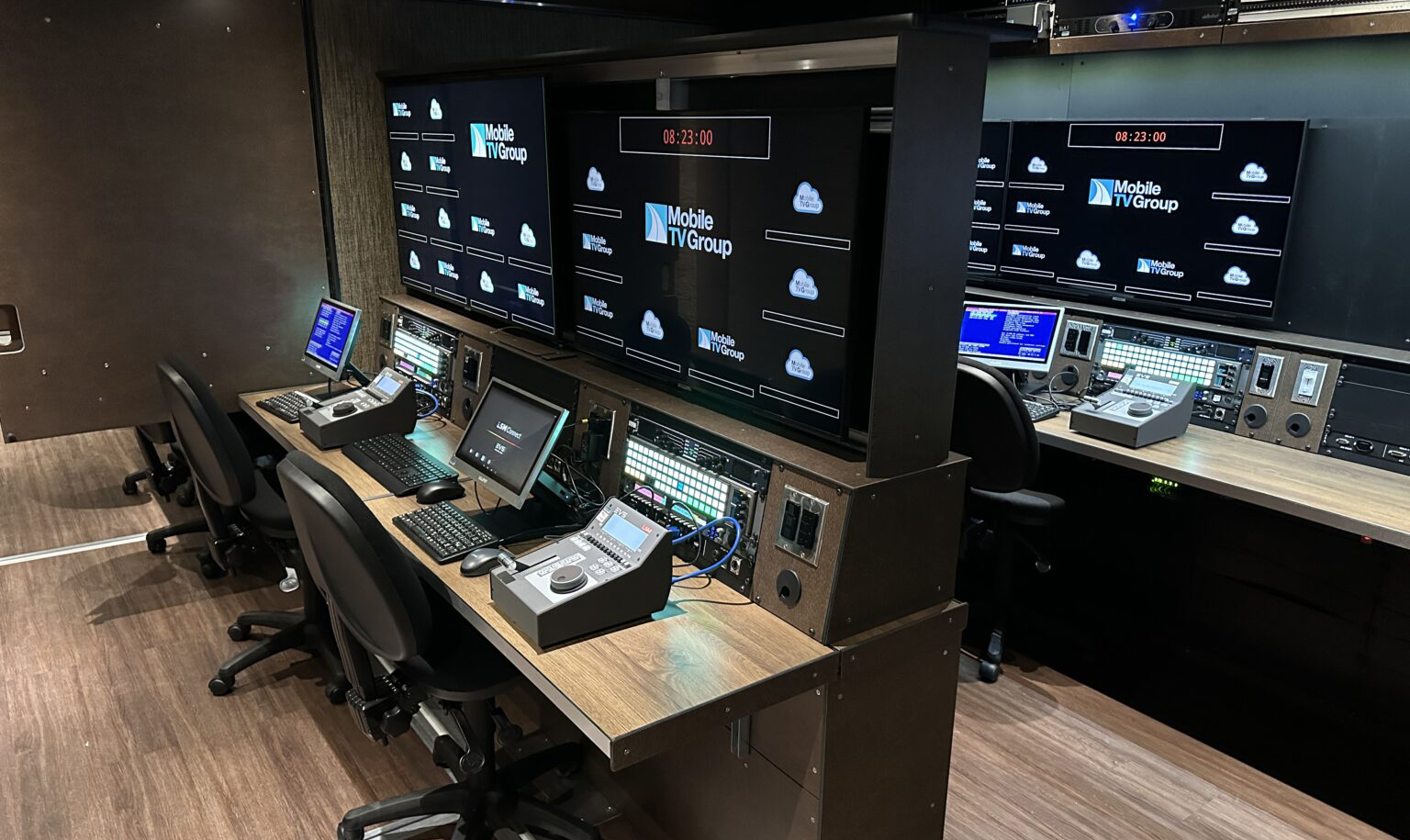 The truck rolls with an arsenal of 12 Grass Valley cameras, including six LDX82 Premier 720p/1080i triax cameras with twin XCUs (two more if the VMU) and four Grass Valley LDX86N Universe super-slo-mo HD/3G fiber cameras — all with Canon lenses. An LDK 8000 Elite triax camera is also in the booth with a Fujinon lens. The truck also leverages a Grass Valley Creative Grading system for HDR and SDR camera shading.

The audio operation revolves around a Calrec Artemis Beam audio-mixing console (56 fader) with 256 routable inputs via IP. A 10,240×10,240 Evertz audio router is connected via IP to the Calrec audio board, which can output multiple channels of surround sound. A bevy of Sennheiser shotgun and stick mics are on hand, along with Sony lavaliers and Crown cardioid mics. 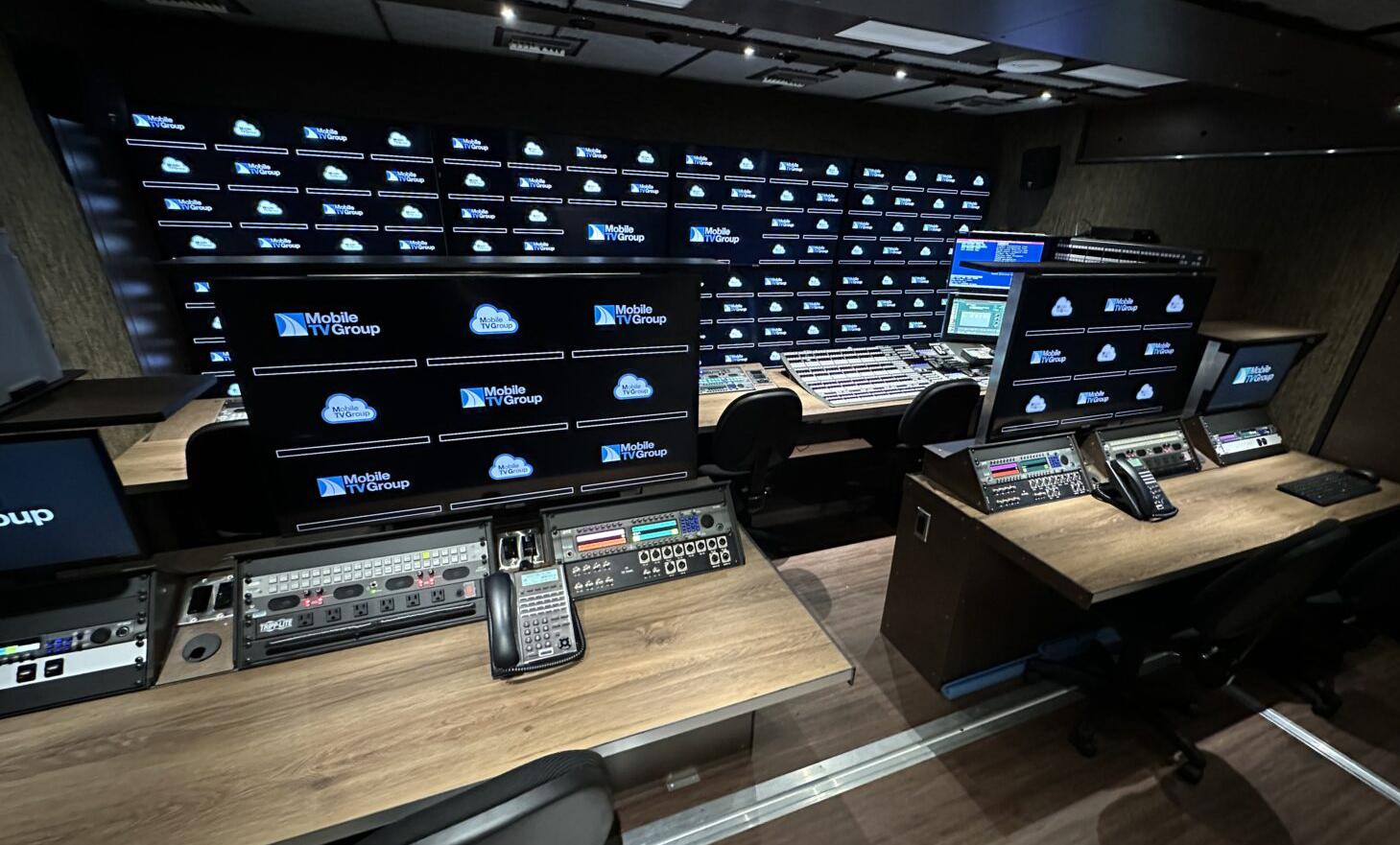 Although MTVG has been putting 1080p HDR-capable mobile units on the road for several years, 51FLEX is the first to actually be 1080p HDR-ready each and every night.

“There is a big difference between 1080p HDR-capable versus actually being 1080p HDR live,” says Dale Canino, VP, technology, Mobile TV Group. “There is a lot of equipment that is billed as 3G, but it doesn’t actually come out of the box that way. You have to license it, prepare for it, and, in many cases, you have to wire things in completely different order to accommodate it. From the camera heads to the CCUs to the router to the switcher to the EVSs and all the way into the encoding — everything has to be able to be licensed for 1080p HDR and to handle 3G signals. 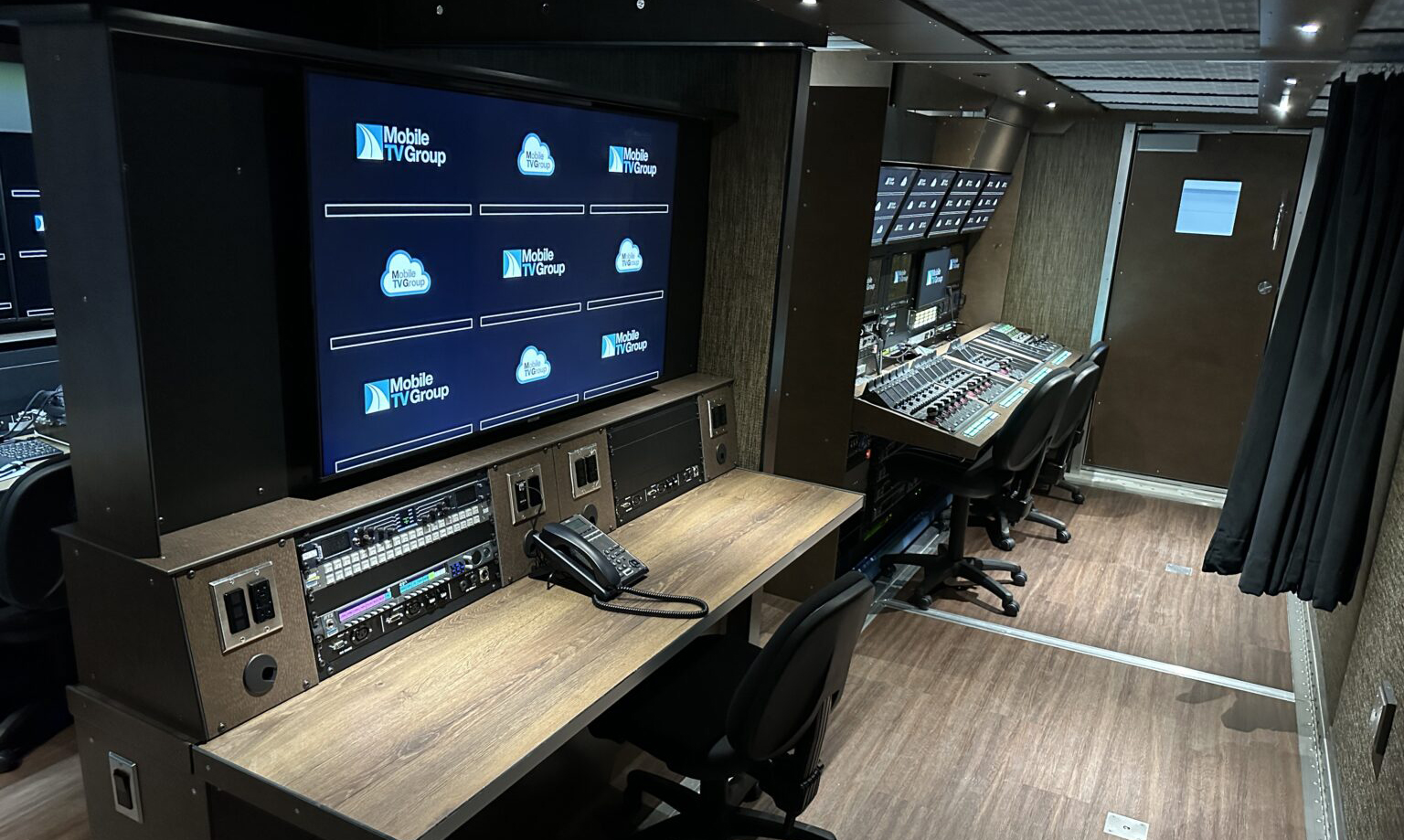 With this in mind, MTVG has created custom HDR guides for its EICs to use. in troubleshooting issues with the truck.

“It is definitely a lot more complicated when you’re doing HDR and you have to make sure everything is correct every step along the way,” says Canino. “We rely heavily on Telestream’s Prism scope technology, and then we have a lot of tips and tricks that we use on top of that. At any point along the chain, if something’s set just slightly incorrectly, it can cause this snowball effect. So it’s a very delicate process.” 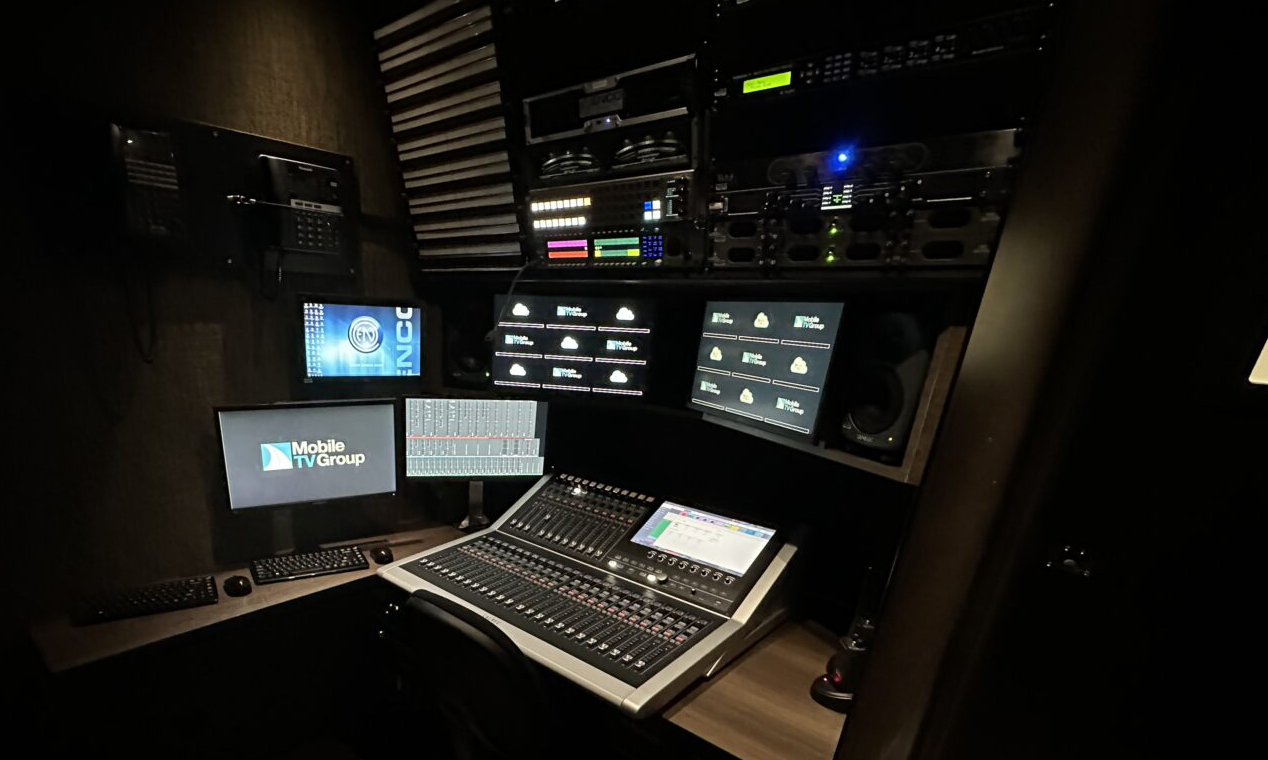 One aspect that hasn’t changed as a result of the move to 1080p HDR is MTVG’s Cloud Control platform, which allows broadcasters to locate their crew remotely when necessary.

“The beauty of Cloud Control is that its design makes it format-agnostic,” says Canino. “You can do a 1080p HDR without affecting the workflow of Cloud Control at all. It will be the same Cloud Control workflow that people are already used to and doesn’t require any changes. That design is paying dividends now with this 1080p HDR truck because we don’t have to adjust a single thing in Cloud Control; it’s exactly same.”

Garvin says 51FLEX is just the first in what MTVG intends to be a growing fleet of fully 1080p HDR mobile units.

“In terms of future builds, this definitely sets a new standard, not just for the RSN world but for the entire industry,” he says. “All the credit goes to our technology and engineering teams, who are the best in the business. We started with a one-off, a [4K HDR] show, five years ago and have [accumulated] the intel and knowledge to be able to build a mobile unit that now cranks out 1080p HDR every day. It’s an amazing evolution, and we’re very excited for what’s ahead.”