Vislink was at IBC for the first time since being acquired by xG Technology and its operations merged with the Integrated Microwave Technologies (IMT) division. Highlighting Vislink’s booth was the new HCAM HEVC 4K UHD wireless camera transmitter in its European debut, having appeared at NAB 2017 in April. HCAM, which is expected to ship this year, permits 4K UHD wireless video with a 70-ms latency via Vislink RF modulation and fills a major hole in the 4K ecosystem.

SVG sat down with Vislink Global Sales Director David Robins to discuss how the market has reacted to the HCAM transmitter, when it’s expect to ship, its application in sports production, and HEVC’s role is alleviating the spectrum squeeze for RF-technology providers. 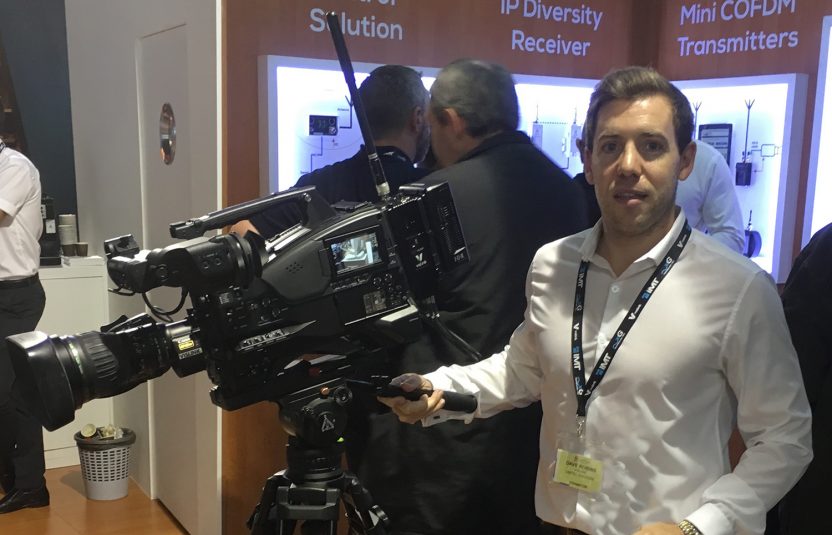 This marks Vislink’s first IBC since being acquired by xG Technology. How is the transition going?

We were acquired at the beginning of the year, and the [Vislink and IMT] brands will remain. Through that acquisition, we’ve grown our product portfolio, our market share, and our market reach. In addition, there’s been very little overlap that we’ve had to deal with; It’s been very complementary and worked really well so far.

We were very fortunate in that the IMT brand is very strong in the Americas market and Vislink is extremely strong in the rest of the world markets. So we are looking to take the best of both going forward, and then we’ll be able to continue to reinvest in research and development to [enhance our] technologies, build our relationships, and furnish the market accordingly.

How has the market reacted to the HCAM HEVC 4K transmitter?

HEVC compression and 4K UHD video are a big focus for us on the high end. We now have that technology with our new HCAM wireless camera transmitter. It’s in a prototype stage here at the booth, but the Vislink brand is so strong that we’ve already been able to presell over 60 of these systems, over $2 million worth. And we’re [on pace] for another 40 systems sold by the end of the year. To sell 100 systems without actually having a product fully available shows a very strong brand and strong messaging.

Everybody wants more for less, even when it comes to 4K. So they want the 4K, but they don’t want a big, heavy, high–power-consumption transmitter. Since our development is totally in-house on the transmit side, we’ve been able to govern the size of the product to make it the smallest, lightest, and with the least power consumption in the entire industry. Of course, when it’s hanging on the back of a camera at a stadium, it’s very important to be small, light, low power consumption so you aren’t constantly swapping batteries. We’ve developed that technology, and the market has reacted very positively, judging by the presell numbers.

Is there an official ship date for the HCAM?

Not yet, but I can tell you we expect it to be sooner rather than later. I won’t say anything apart from we’re banking on shipping them this year.

Will HCAM technology be able to be used for on-board cameras in motorsports coverage?

Absolutely we will be able develop this [technology] for our on-board relationships, such as Dorna and MotoGP. This technology will progress in the same way that our wireless-camera back is progressing. Now that we’ve got an HEVC 4K platform, we can use it in the camera back but also on the on-board. That lends itself to the satellite products as well, so we will start developing that technology into the satellite products. The more we can give the consumer with regards to 4K delivery and content, the more that we can watch it at home in terms of live events and live television, and the more revenue is generated for our partners and for the operations companies that acquire it from us as well.

Although live 4K sports production has come a long way in the past two years, wireless RF cameras have yet to become a reliable piece in the 4K ecosystem. How big a leap will this be for broadcasters looking to produce an end-to-end live 4K game production?
You’re absolutely right, it’s a massive next step. Until now, there are two ways they’ve done this for 4K [production]: it’s either changing wireless cameras to wired cameras, which loses flexibility, or it has been upscaling [HD to 4K], which requires a large amount of equipment and time and effort that the operations companies have to put in. Rather than upscaling, we can now do true 4K UHD, and that means one less thing to worry about for video-operations companies.

How is Vislink/IMT managing the spectrum crunch in serving the RF needs of live productions?
We’ve always got one eye on this situation, and we always ask for the input of our partners and third-party people in the industry. The beauty of HEVC compression is that it actually gives people more for less, which means less available bandwidth is needed. We can’t do anything about the sell-off and the squeeze on bandwidth, but we can be more efficient with the bandwidth we have. We can make sure our customers get the most out of the technology that we give them. HEVC is going to save them 40%-50% right away, and then, if their bandwidth is squeezed down, we can help them with that as well.

HEVC suits two very different markets: the first is to help with the squeeze on the available bandwidth, and the second thing is to deliver high-end content like 4K. And I think HEVC will continue to be around certainly until the next big thing comes out in compression many years from now.