Telemundo will present comprehensive live coverage and unprecedented multiplatform offerings of the biggest soccer event in the world. More than 2,000 hours of coverage, including all 64 matches live in Spanish with in-venue commentary team calling all matches from the stadium, will be available across Telemundo, Universo, Peacock, TelemundoDeportes.com and Telemundo Deportes’ app. 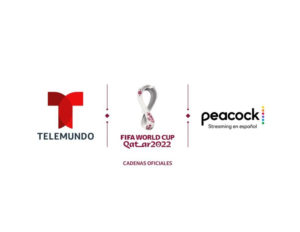 The schedule includes 56 matches on Telemundo and eight matches on Universo due to simultaneous kickoffs. Peacock will livestream all 64 FIFA World Cup matches. Live coverage of the FIFA World Cup Qatar 2022 will kick off Sunday, Nov. 20 at 9 a.m. ET with coverage of the Opening Ceremony leading into the opening match between host-country Qatar and Ecuador at 11 a.m. ET on Telemundo and Peacock. Top 10 marquee matches during the first week of group stage include the following:

Peacock will be the only direct-to-consumer streaming service in the United States to stream live coverage of all 64 matches. The first 12 matches of the FIFA World Cup 2022 will be available to Peacock subscribers on the free tier, while the remaining 52 games (beginning on Nov. 24) will be available to Peacock Premium subscribers. In addition to live match coverage, Peacock’s World Cup Hub will surround the FIFA World Cup 2022 with daily shows featuring highlights and analysis, on-demand full-match replays, and programming such as documentaries. The Copa Mundial 24/7 Virtual Channel, produced by Tplus, is Peacock’s exclusive, free virtual channel home to daily highlights, analysis, and debate shows, including:

Digital
YouTube will offer Spanish-language real-time video highlights available via the Google search engine, including pre-game, in-game, and post-game clips featuring best of, match highlights and major moments in the match, as well as game previews, winning probabilities, line-ups and news. Twitter will feature daily live content, original programming on Twitter live from the host city, live look-in to Peacock’s coverage and video highlights throughout each competition day. Facebook and Instagram will provide match highlights, social-first content live from Qatar featuring live content from the stadiums, exclusive coverage of trainings, team arrivals, warmups and press conferences. TikTok will immerse soccer and casual soccer fans into the event by offering an exclusive livestream from Qatar featuring fans, daily match highlights, as well as unique fan stories and behind the scenes content during the entire event. Interactive Bracket for the World Cup and Fantasy Content will give fans the opportunity to compete on TelemundoDeportes.com available on both desktop and mobile interfaces and allows users to participate in multiple game modes, whether it be playing against soccer fans or creating their own private league for family and friends. NBC Sports Predictor powered by PointsBet app (available in the App Store and Google Play Store) and at NBCSports.com/Predictor will launch free-to-play games consisting of contests that cover a range of predictions from head-to-head positional statistical matchups to the game result, and more.

Encore Presentations
Universo will carry encore presentations of every game beginning at 5 p.m. ET each day through the Quarterfinals, and later shift to a 7 p.m. ET start for the Semifinals through the Third-Place match. On Sunday, Dec. 18, the encore presentation for the Final will begin at 2 p.m. ET on Telemundo and 4:30 p.m. ET on Universo. Peacock and TelemundoDeportes.com will both feature on-demand full-match replays throughout the tournament.