This year’s production is enhanced by IP, hybrid UHD/HDR, AR, and other new tech

Florin Mitu is head of broadcast production for the 2022 FIFA World Cup in Qatar, and this year’s effort has been years in the making. And, although the COVID pandemic and the global supply- chain crisis impacted efforts, innovations like a move to IP, new workflows in UHD and HDR, and additional broadcast enhancements have lifted the quality of the viewing experience. Midway through the tournament, Mitu sat down with SVG at the IBC to discuss the efforts.

What have been your general impressions of how the World Cup has played out?

It’s an extremely well-organized event on all fronts, and we are very grateful for those who have worked over the last 12 years to put this in place. The stadiums, as you probably have seen, are fantastic. The facilities here at the QNCC [where the IBC is located] are great and unique. I don’t know whether you’ve been already to the presentation facilities at the Souq Waqif, but we benefit from a great location, which is the location that all broadcasters wanted.

As an extension to that, we have also the presentation platforms with the views of the skyline and the Corniche. We spent quite a long time trying to find the best spot to showcase the host country to the viewers of the world. 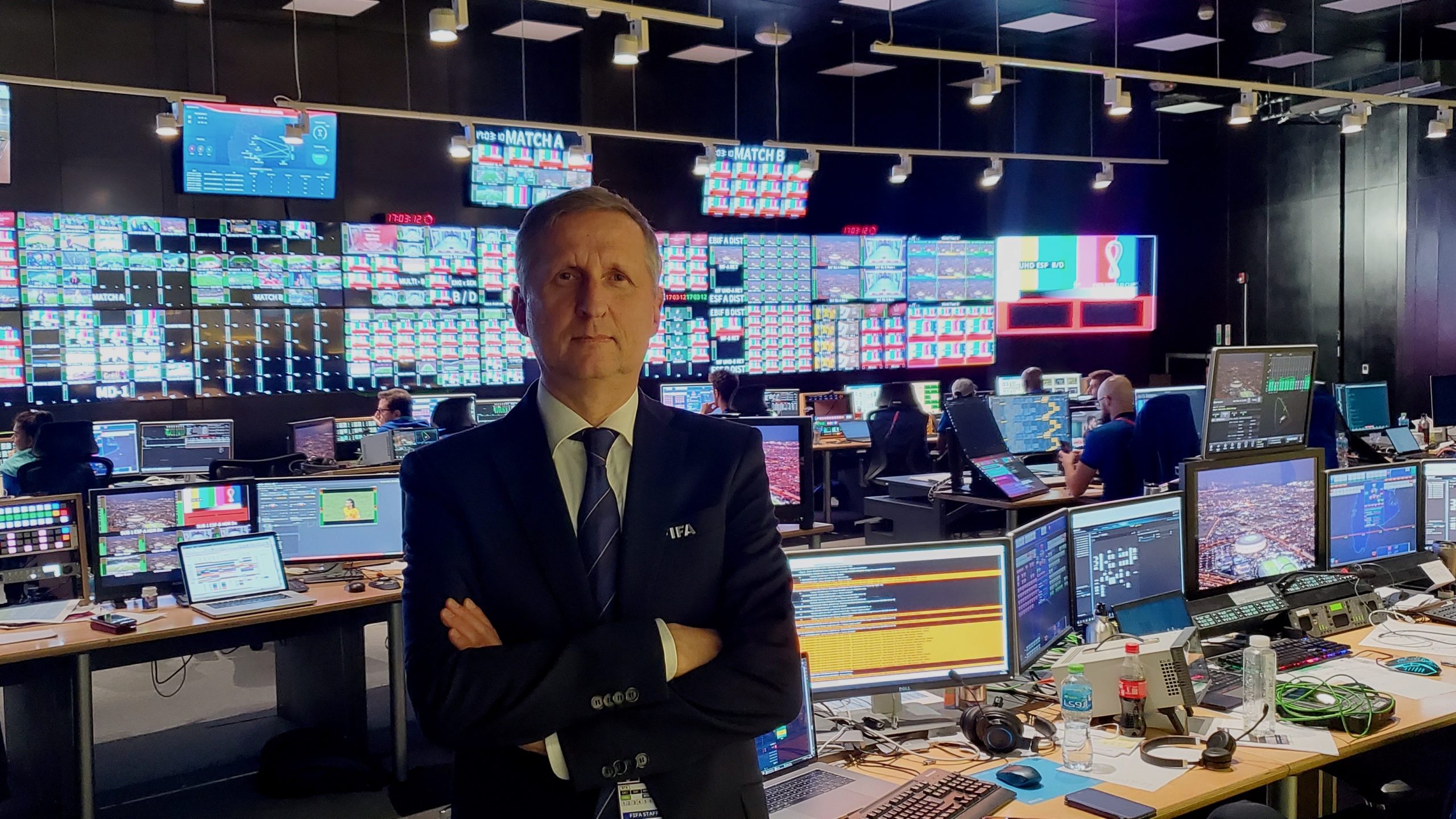 FIFA’s Florin Mitu: “I think the achievements here are some that will make everybody proud at the end of the tournament.”

With the move to IP, when you look back at 2018, we were not yet making full use of it. Shortly after that, we decided to go that route for 2022. Then what happened, with COVID on a global scale, the use of IP and remote was accelerated.

It was still a key decision for us to take, and we had to look at it very carefully. We had to decide whether that made sense in terms of a full-scale remote production for this tournament or not. We weighed the risks and the advantages and then decided against a complete remote production.

In the future, there will be more steps in this direction, which I can’t disclose at this point in time, but there’s something very exciting in the pipeline.

IP is still in relatively early days, and there are still some things to be sorted out. What are your thoughts on where IP is in terms of maturity?

For technical providers, I think it’s a matter of getting more experience in using it, getting more training of staff, and getting to know the capabilities of the technology and software better. There’s still a certain element of learning that is happening here.

That’s one of the main challenges that our host broadcaster had to fix.

How has the UHD/HDR 12-gig service been received by rightsholders?

We have 24 takers, which is great. It’s the same as in Russia [site of World Cup 2018], but now we are distributing it onsite. It’s an evolution from the Russian model, which, as you may remember, we had a dedicated main camera, which was used for the UHD feed. Here, there’s one hybrid UHD/HD model because you can’t find so many native UHD cameras in the whole world.

We then decided together with HBS to go for the wide-shot cameras in UHD and the close-up and the super-slo-mo [cameras] in 1080p. It’s working great, and we’re very happy with that.

We also haven’t received any complaints so far. In 2018, on the broadcaster side, there was still a struggle to understand precisely the HDR workflows and the various flavors and how they applied to your production chain and so on. Now it’s very smooth.

How would you describe the FIFA/HBS LUT for HDR? I know each one has its own characteristics, such as either going for being more realistic or being more vivid.
I think it’s both of that: a more realistic look and different colors. But, yes, we created our own LUT for this tournament, and we are very happy with how it looks and how it improves the viewers’ experience. That comes together with the immersive sound, of course.

When you look at the production plan for the matches here, from a production perspective, is there anything you think is still missing?
To be honest, look at what happened here. Camera-wise, where do you go beyond 42? I mean, yes, you can add more cameras, but you are seeing pretty much everything that’s happening down on the field.

The route we were very excited to take was to integrate some of the work our colleagues from other divisions in FIFA do — such as the High Performance Team, led by Chief of Global Football Development Arsène Wenger, as well as the Football Technology and Innovations Team — and try to improve the viewers’ experience and understanding of the game by incorporating some of their tools.

Therefore, we have introduced, for the first time ever, Enhanced Football Intelligence statistics. They come on augmented reality before the match, halftime, after the match, and then as lower thirds during the match. That has never been done before.

We have a connected ball that sends data to a central server here. That data is used, for instance, to calculate the speed of the ball. We now have that, which only seems natural.

But you need to have the tools to do it, and the chip in the ball helps us to do that and also allows us to see the spin rate, the speed of the ball as a play develops. We put those stats on the replays for situations when there was a free kick or a nice shot from outside the penalty box or inside the penalty box, which ended up with a goal.

Are you guys happy with the offside graphics?
Yes, and, again, there has been hard work over the last couple of years on that project. We tested it behind the scenes at the Arab Cup last year, and then we had the FIFA Club World Cup in Abu Dhabi in February this year, where we actually showed it on screen for the very first time.

There are two parts of it. The first component is the tool that the referees are using to determine whether it’s offside or not. That’s based on the 29 points of player limb tracking. And the chip in the ball helps determine the exact moment when the ball was hit. The video assistant referees are analyzing that data and validating it, before confirming the decision to the referees on the pitch.

What they see is red and blue lines. The data creates those lines, and they analyze those and base their decisions on that.

There’s another component: for full TV and infotainment, an animation is instantly developed. What you see then is not actually the image on which they base their decision but a translation into something that the viewer can understand straight away.

Also, this will be your last Men’s World Cup. What does that mean to you?
It’s interesting, because, in my career, I made various moves but my very first World Cup I worked onsite was in the U.S. in 1994 when I was commentating for Romanian television. All these years later, I have the privilege of leading the production project here for the FIFA World Cup. Next time, in 2026, I’ll be watching it as a fan.

Last question. How has the team done in getting this event to this point?
The team’s doing a great job, the whole team. Whether you’re talking about our people in FIFA, in my team, in the other departments and divisions of FIFA or the host broadcaster or the subcontractors, everybody’s working as one team, and that’s fantastic.

I think the achievements here are some that will make everybody proud at the end of the tournament. Everybody should look with a lot of pride back at this FIFA World Cup in 2022.