“We’re ready to make history,” said Telemundo Deportes President Ray Warren when he and other key executives laid out expectations and plans for the 2022 FIFA World Cup, which kicks off in Qatar in a little more than 10 days. The U.S. Spanish-language–rights holder is slated to deliver all 64 matches to viewers and more than 2,000 hours of total coverage. And, he added, “For the first time ever, we will broadcast it on Telemundo and stream it on Peacock.”

According to Eli Velazquez, EVP, sports content, Telemundo Deportes, announce teams will call all 64 matches from inside the venue (a first in the history of U.S. World Cup coverage), and Telemundo will complement that with reporters covering team base camps on match day minus one, as well as things going on in and around the city. More than 300 production staffers will be in Doha, and another 650 will be in Miami.

“We’re also complementing the coverage with the largest team of soccer experts, former players, coaches that any organization has brought to the coverage of a World Cup here in the U.S.,” he said. 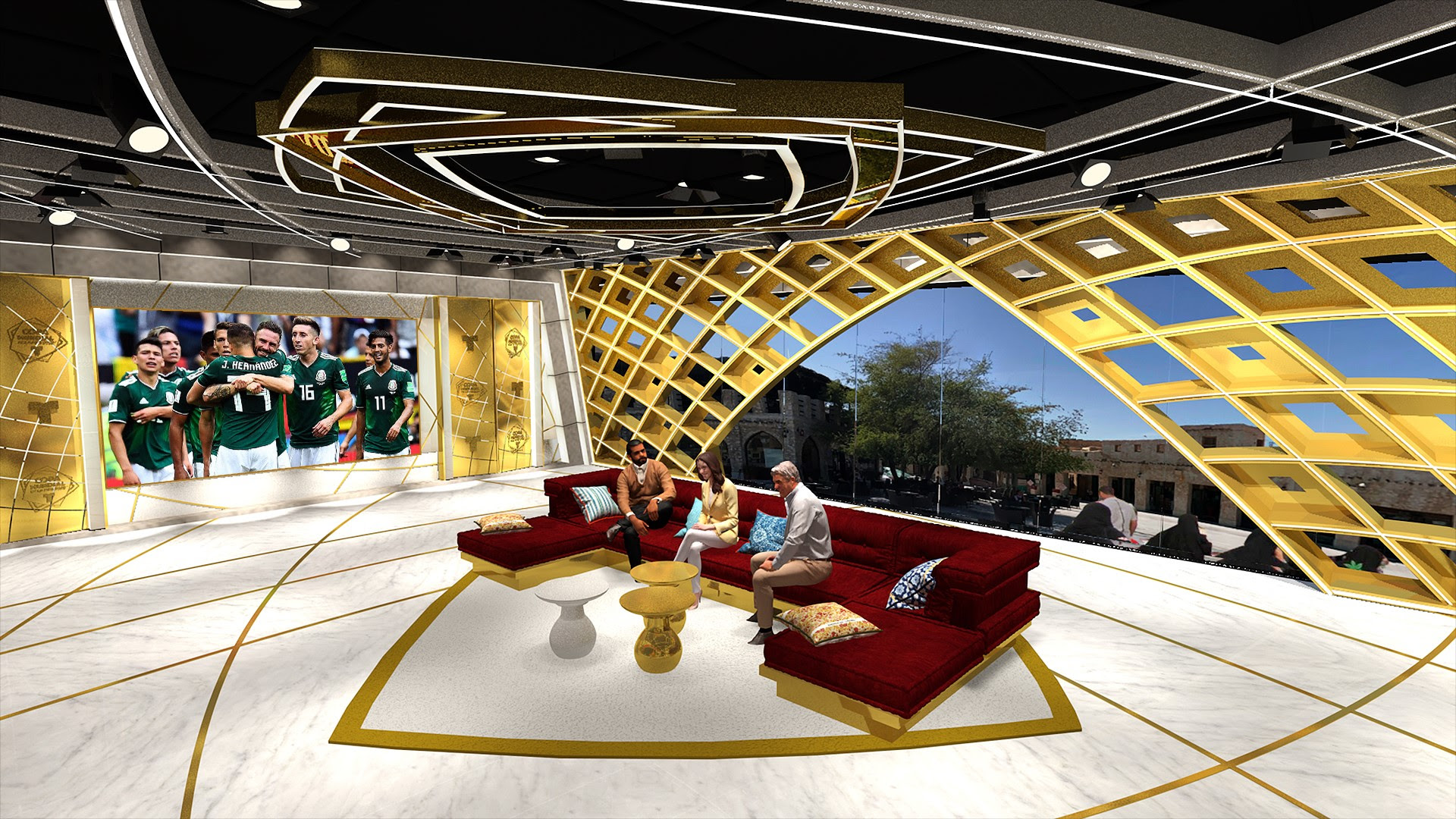 Telemundo will have four locations in Doha for the 2022 FIFA World Cup.

Four sets in Doha will help all that talent tell the story of the 2022 FIFA World Cup: the main presentation studio at the Souq Waqif Marketplace, a second on the Corniche overlooking the West Bay skyline and modern Doha, a third in the heart of the Souq marketplace, and a fourth at the Al Bidda Park, where the Fan Festival will be held.

“We have the distinction of having the largest footprint at that particular location to make sure we have every single angle of fandom covered,” Velazquez explained, “the presentations, the excitement, the energy that will come from that location.”

Also, a permanent studio presentation position will be located at the Lu Sail Stadium.

“There are a lot of great matches that take place at Lu Sail Stadium,” he said, “none greater than the actual final on Dec. 18. We will have a permanent position at that presentation studio to highlight all of that action, and we’ll also have interior and exterior platforms at key matches throughout the tournament.”

Telemundo will also have a dedicated position at the IBC for analysis as well as a video announce booth for referees. All studio locations were built by HD Studio and Black Walnut.

Because this will be the first time since 1930 that all World Cup matches will be in one city, Velazquez said, there will be a lot of learning during the first week on how that will impact movement of resources, people, and fans.

For viewers in the States, coverage begins early, with tip-off on most days at 4 a.m. ET, and continues through the day with pre- and post-match coverage of each of the four matches in the Group Stage and more.

“As people begin to consume this event on a daily basis,” added Velazquez, “we are delivering without a doubt the most immersive cultural event to the audiences that we serve here in the U.S. We’re making sure that we’re informing, analyzing, and highlighting what goes on in the 90 minutes on the pitch of each match, but we also want to entertain folks. We want to transport the viewer and the user and the consumer to a country that not everyone gets to go to and make them feel like they’re there with us.”

A big part of that connection will be served via the digital efforts. Romina Rosado, EVP, Hispanic streaming, NBCUniversal Telemundo Enterprises, said that, with a full two-thirds of U.S. Latinos being under the age of 34, making sure everything is available on whatever platform they want to consume it on is important.

“All games of the World Cup will be streamed live on the app,” she pointed out. “The first four days will be unauthenticated [on the app and on Peacock]. Starting on Thanksgiving Day, fans will be able to continue watching the games by entering their cable credentials.”

Peacock, she added, will be the home of the World Cup in Spanish: a free 24/7 channel will feature coverage, commentary, debates, replays, and more. In addition, Spanish-language real-time video highlights will be offered on YouTube; live content will be available on Twitter; match highlights and live content will be on Facebook and Instagram; and TikTok will immerse hard-core and casual soccer fans in the event with an exclusive live stream from Qatar featuring fans, daily match highlights, unusual fan stories, and behind-the-scenes content throughout the event.

“Telemundo will also be rolling out a slate of originals on Peacock around the World Cup to serve what we call the 200-percenters: audiences who are 100% American and 100% Latino and fluent in both languages and cultures,” Rosado explained. “We cannot wait for Nov. 20 and to offer football fans all over the U.S. the most digital World Cup ever in Spanish.”

She added that the established user base of soccer fanatics on Peacock, which offers English Premier League matches and more, will also drive traction. “We absolutely believe that we’ll be able to activate them.”

“Latinos have also been responsible for 73% of the population growth of the U.S. labor force since 2010,” he said. “The World Cup is the ultimate place for brands to reach and engage this audience in the U.S. Almost three-quarters of Latinos 16 and older say they’re soccer fans, and over half of those consumers say that they’ve reshuffled their priorities to watch an important soccer match. And there are no bigger soccer matches than the World Cup.”

Given all those stats and demographics, he said, it’s no surprise that Telemundo is pacing well ahead of where it was in 2018. “We’ve not only surpassed our 2018 record revenue but have exceeded all of our current 2022 revenue goals.”

Warren is looking forward to Thanksgiving Day, when all four World Cup games will lead into NBC Sports’ coverage of the NFL’s Patriots-Vikings evening matchup.

“We hope to bring both of those audiences and both of those broadcasts together in some way in pre- and post-game coverage,” he said. “All of NBCUniversal is behind our coverage of the World Cup. It takes a village, right? It’s a coordinated cross-promotional effort to get behind this biggest event in the world.”